We recently chronicled our ten favorite characters in Dynasty Warriors 9 and one of the best things about these characters, and every other officer in Dynasty Warriors 9, is that using them for a long time doesn’t have to get stale. Every playable character can use every weapon type and do so with their own unique flair. In turn, each of those weapons can be customized by applying different gems either gathered or crafted by the player. It’s just a matter of deciding what one wants and then gathering the necessary resources and money.

Equipping an officer with a new weapon is a simple matter in Dynasty Warriors 9. Just go into the Officer Info menu, select Equipment, select the equipped weapon and then choose the desired replacement weapon. As mentioned above, customizing weapons requires gems. While gems can be bought and found throughout the world, the best and most common way to acquire them is to craft them. To do that, one needs to have a gem crafting recipe known as a “scroll.” Many scrolls can be bought from the various merchant and collectors found throughout the game, but the best method of obtaining them early on is receiving them as quest rewards. Once one has a gem crafting scroll, all they need to do is find the required materials. 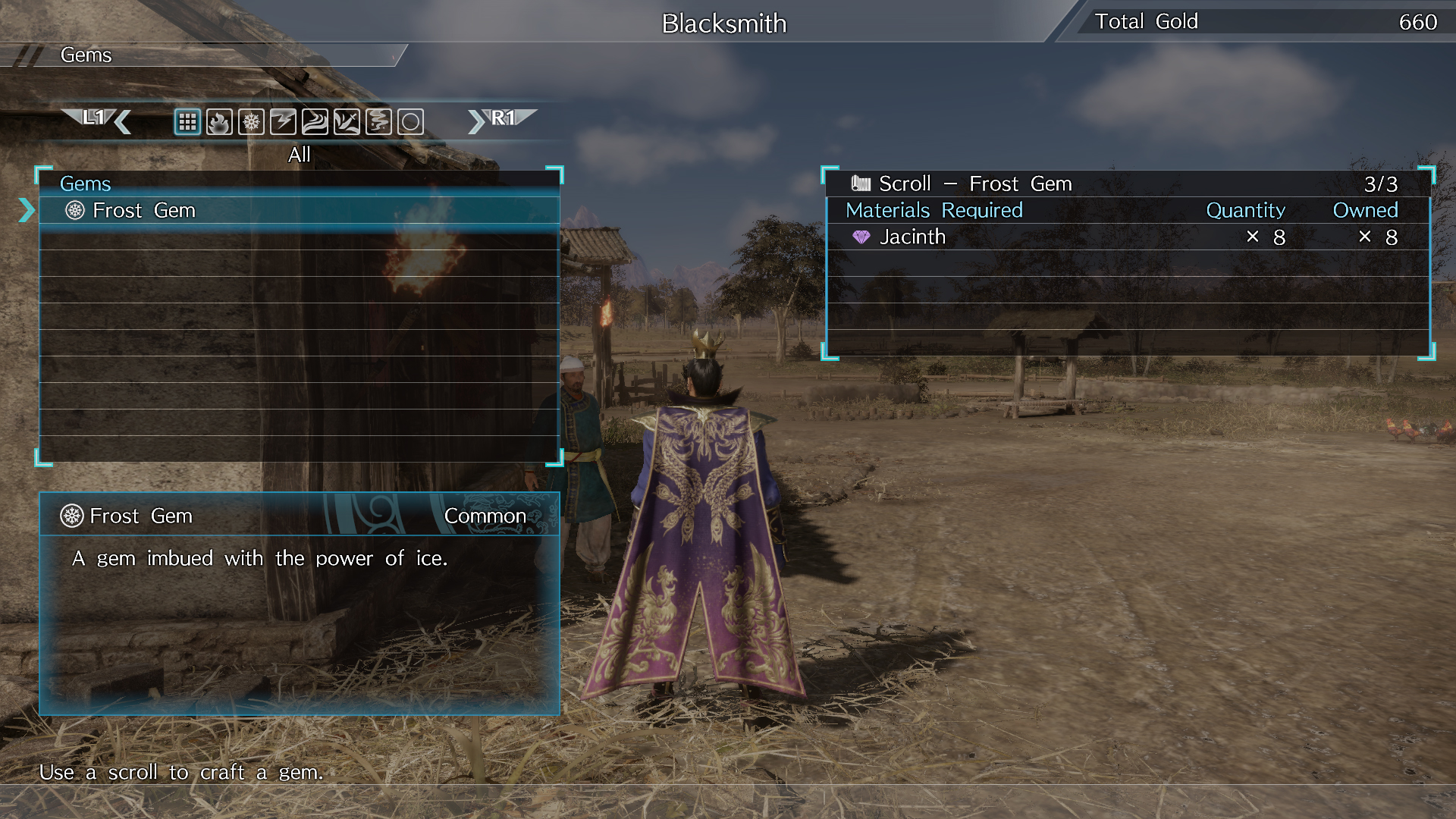 The Dynasty Warriors 9 map is absolutely littered with crafting materials, so the best thing to do early on is to either ride around grabbing everything one can find lying on the ground. This can be tedious, so it’s advisable to make liberal use of the fast travel system to speed up the process. Most materials can be found just about anywhere, but the more uncommon ones tend to spawn in set locations. Make note of where these are being found and then make sure there’s a point of interest nearby to fast travel to. A point of interest can be just about anything. Camps, gates, castles, bonfires, waymarks, landmarks and even segments of road can all be used as fast travel points.

If there isn’t already a convenient travel point marked on the map, more can be unlocked by interacting with the nearest waymark or a nearby landmark like Zhongyue Temple or Mt. Song. All of these reveal new points of interest on the map which can then be visited and used as fast travel destinations from then on. Sometimes large caches of materials can just be stumbled upon if the conditions are right. One of these is located along the riverbank south of Louyang City. Go there in the middle of the night to reap a healthy crop of diamonds. Once the necessary materials are in hand, head on back to a blacksmith in a town or Hideaway to craft the desired gems. 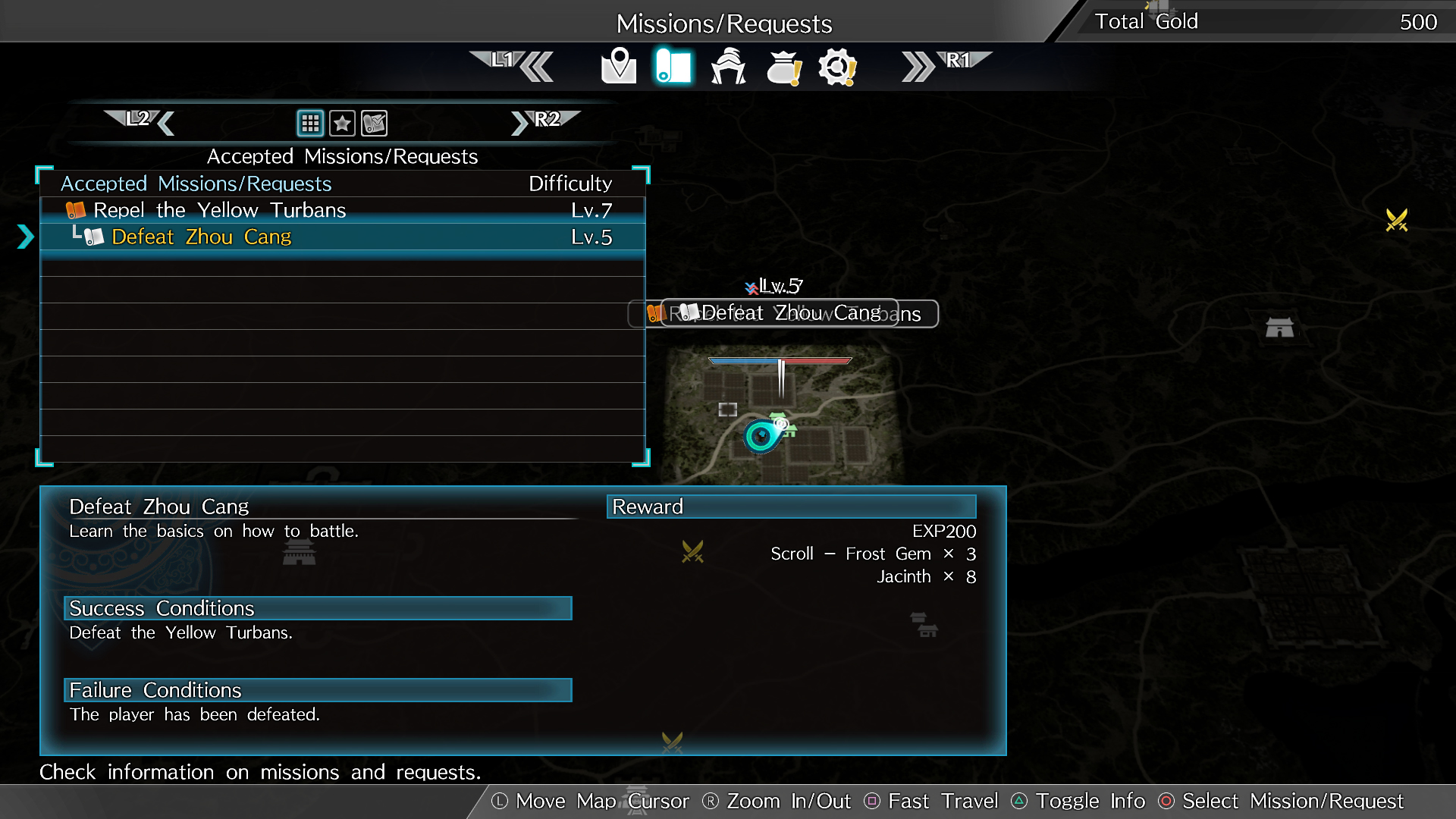 Applying gems is done through the Reforge menu. Select the weapon to be upgraded and then choose which attack slots to apply gems to. Gems have different effects depending on which slot they’re placed in, so pay attention to the description given on the screen. For example, applying a spark gem to the launch attack slot will result in +4% general attack damage and +5% attack damage while on horseback. Make sure to get the crafting ball rolling early, as developing this knowledge early on will enable players to more fully take advantage of the system once more powerful gems and weapons are made available. Don’t be afraid to experiment here. Try all kinds of weapons on a favorite officer or two and try all manner of gem combinations too. The results will be both surprising and entertaining.

Between its weapon system and entertaining roster, there really isn’t such a thing as spending time with the wrong character in Dynasty Warriors 9. In all likelihood, most players will already have a shortlist of favorites before getting the chance to play as some of officers listed here. Every officer in this game bring their own flair to the experience of course, it’s just that those listed here fall a bit more outside the norm than most on the playable roster. Of course the characters alone does not a Dynasty Warriors game make. Those new to the series or who are wondering about the changes Dynasty Warriors 9 brings to the established formula should do themselves a favor and check out our review to see if the game holds up to the series’ legacy.