After releasing numerous games based on the one against a thousand Warriors formula, Dynasty Warriors 9 returns to once again tell the story based on Romance of the Three Kingdoms. The battles, story and characters will be familiar to long time fans and for the uninitiated Dynasty Warriors 9 is a good introduction to one of China’s great literary works. Dynasty Warriors 9 did make some major changes to their standard format and here is a guide meant to serve as a primer for new and returning fans alike. 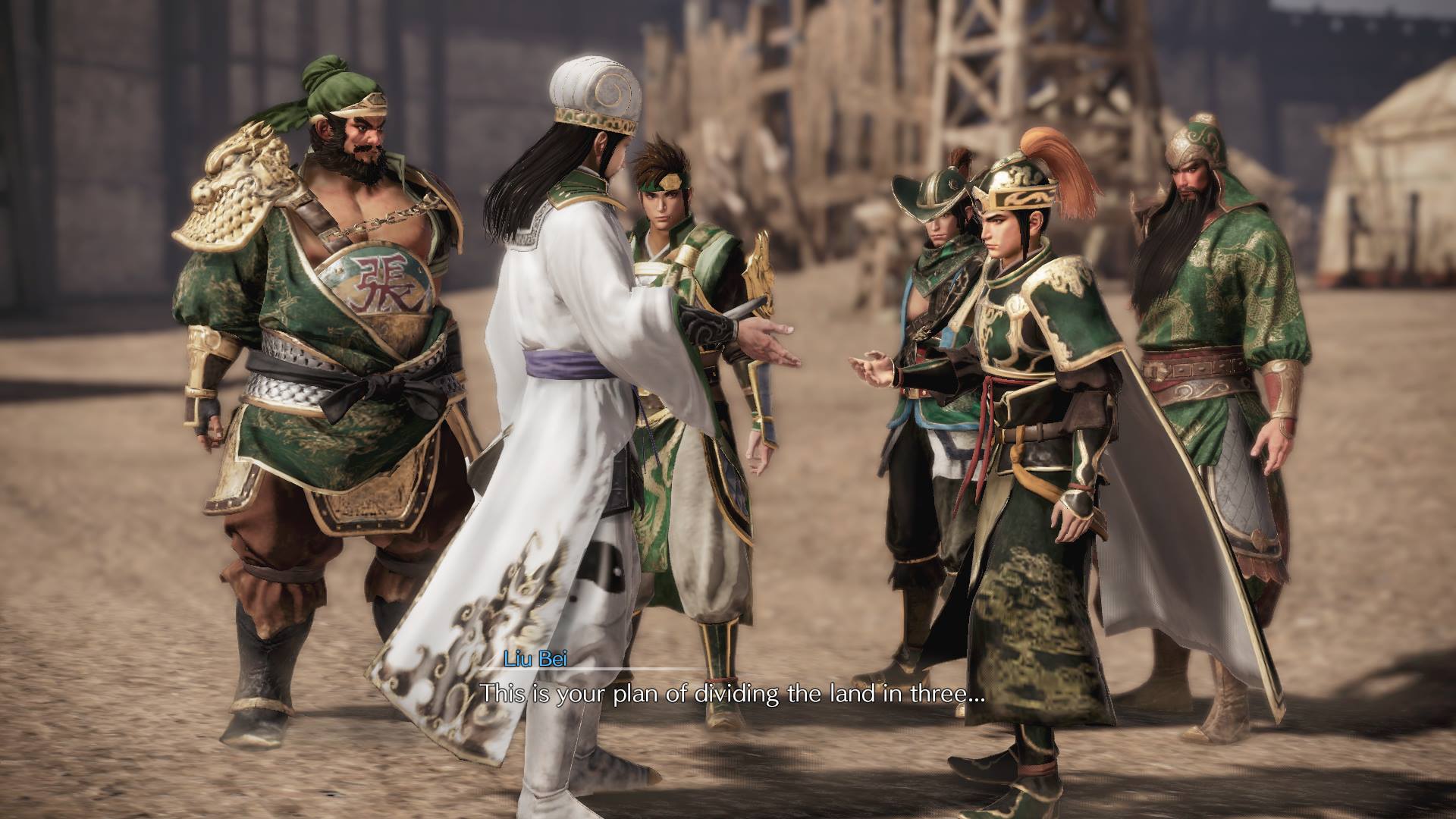 Dynasty Warriors 9 is based on the fourteenth century novel Romance of the Three Kingdoms, which begins in year 169 CE during the Chinese Han Dynasty and ends in the Three Kingdoms period with the reunification of the land in 280 CE. The game begins a little later than the start of the novel during the Yellow Turban Rebellion near the end of the second century. The initial playable characters are Cao Cao of Wei, Liu Bei of Shu and Sun Jian of Wu, who during this period are minor players but eventually arise to become leaders of their respective kingdoms. Wei, Shu and Wu each begin their journey facing common threats, such as the Yellow Turban Rebellion and the tyranny of Dong Zhuo even though each leader has different motivations driving them. As these threats are dealt with the land becomes further divided, and while these three kingdoms may have had alliances with each other during these events they turn to battling against each other for each leader has a different vision for the reunification of the land. 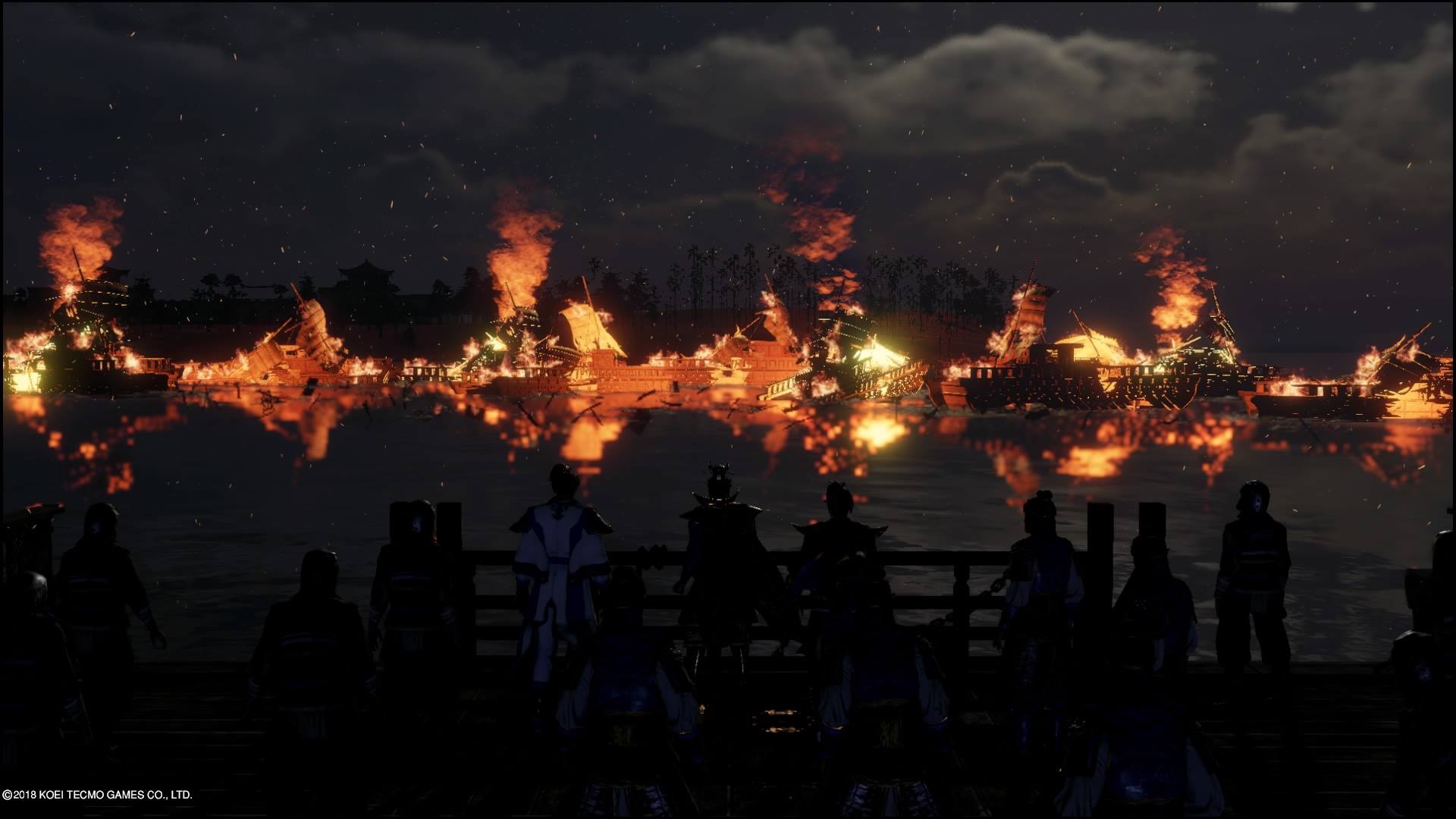 Dynasty Warriors 9 has a massive roster of playable characters with 94 in total. Most characters belong to one of four kingdoms: Shu, Wei, Wu or Jin. A fifth category, Other, exists for characters that do not fit into one of those four kingdoms. As the player completes chapters or certain objectives within chapters, more characters become unlocked. 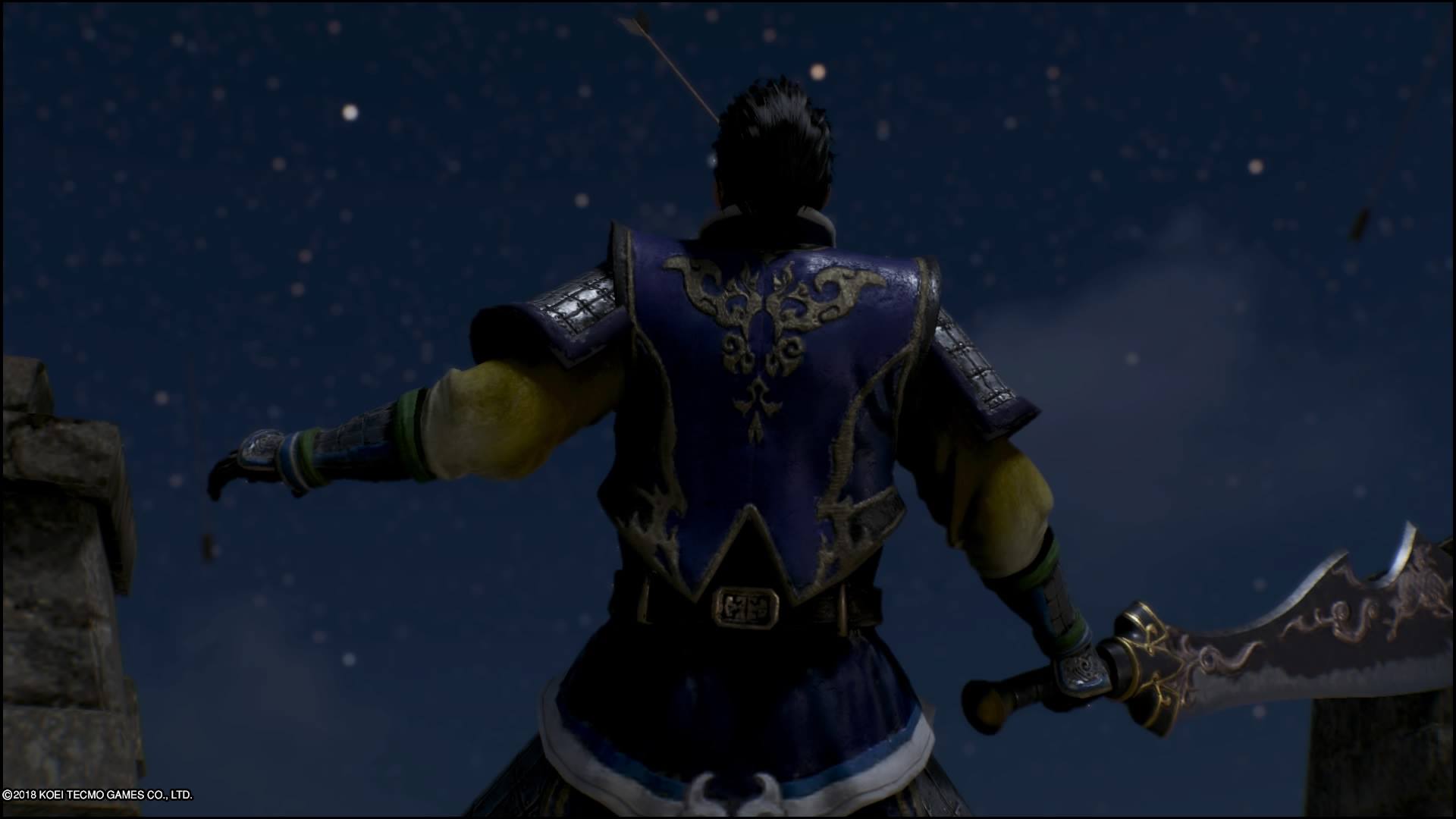 Wei: The foundation for the kingdom of Wei was laid out by Cao Cao during the end of Han Dynasty. Cao Cao was appointed Duke of Wei by the emperor in 213 and his son Cao Pi established this state in 220 with its capital in Luoyang. Cao Cao fought to end the chaos of the land through any means necessary. Historically viewed as ruthless and even tyrannical, he was willing to be vilified in order to achieve his goals.

Wu: Wu’s leadership was wrought with tragedy. Sun Jian dies in battle before the end of the 2nd century, passing the leadership to his elder son Sun Ce who is assassinated a few years later, leaving his young brother Sun Quan in charge. During the time they formed an alliance with Shu to battle Cao Cao at the Battle of Red Cliffs, or Battle of Chibi as it is referred to in game. This alliance was eventually dissolved with Wu invaded Shu’s territories in Jing Province. Wu existed as a vassal kingdom under Wei in Jiangnan region until they declared independence from Wei in year 222.

Shu: Liu Bei was a benevolent leader, who prior to becoming a warlord supported himself by selling straw mats. As counterpart to Cao Cao’s iron fist, Liu Bei’s caring for the good of the common people made him a beloved figure among the public but viewed as weak to other warlords. Liu Bei was able to overcome his lack of resources and initial military might with the aid of his sworn brothers Guan Yu and Zhang Fei along with the brilliant strategist Zhuge Liang.

Jin: Historically this is one of the later kingdoms, and didn’t form until near the end of the Three Kingdoms period in the year 265. In Dynasty Warriors 9, Jin does not become available until after completing The Battle of Chibi in Chapter Six. Xin Xiangying is the first playable character from this kingdom, and she is an advisor to Cao Cao during the Battle of Chibi. Simi Yi is in a position of leadership within Jin, who was a character that was part of Wei until Jin was added in Dynasty Warriors 7. This is an oversimplification, but within the context of Dynasty Warriors games Jin is essentially a new era of warriors that branches off Wei.

Other: This is the catch all kingdom for characters that don’t fit into the larger kingdom stories but have interesting stories of their own. Initially no one from this group is available, but upon completing Chapter One Zhang Jiao and Dong Zhuo become available, with more characters getting unlocked with the chapter that fits their appropriate timeline is completed. 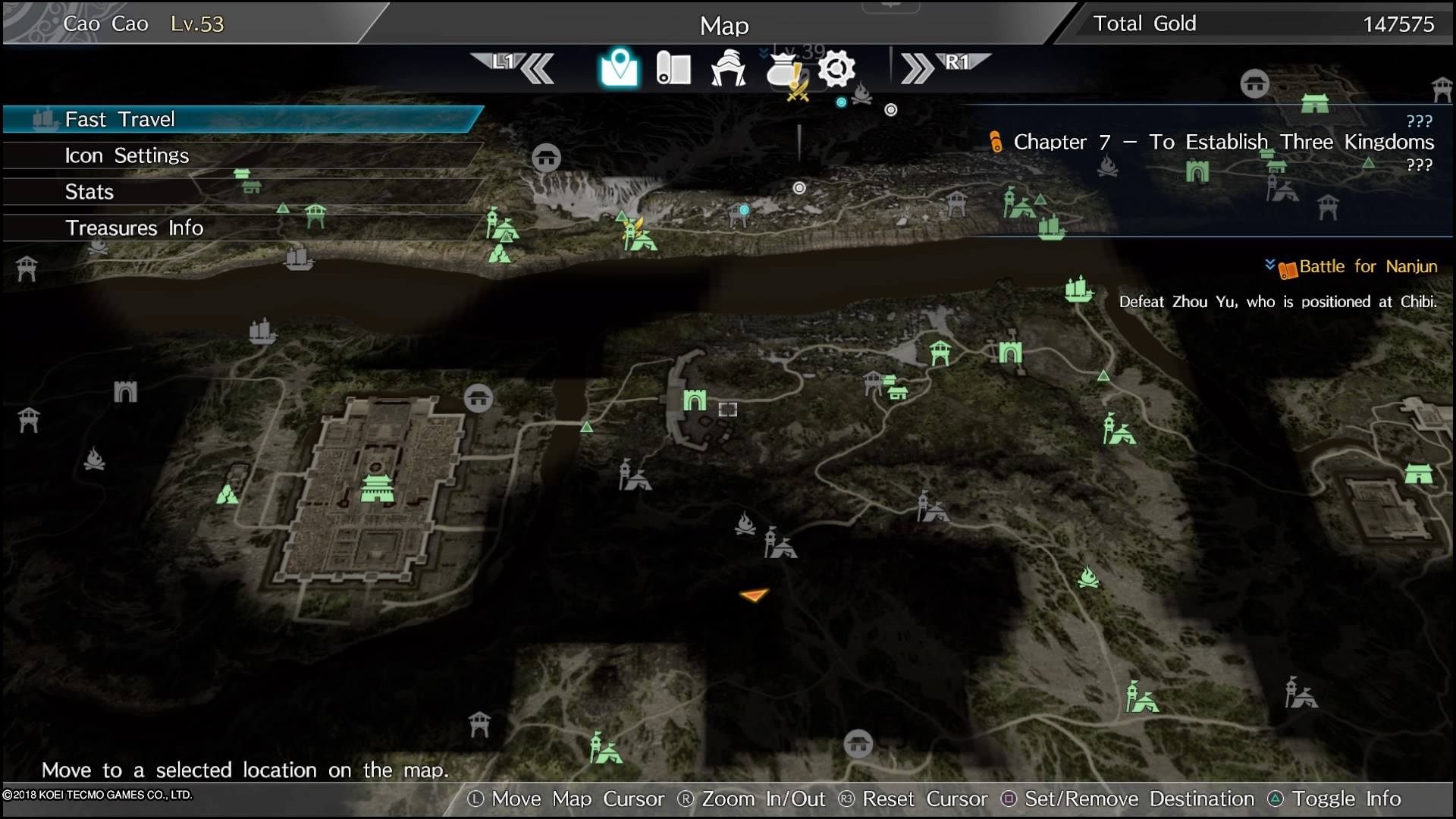 Dynasty Warriors 9 maintains the basic core game play elements of all the previous Dynasty Warriors titles, which is essentially run into the battlefield and hack hundreds or thousands of enemies to death. The player has the standard attack, stronger attack and musou attack, which is basically a special attack that does a lot of damage to a large area of enemies if the musou gauge is full. The player can travel by foot or by horse, obtaining strength through equipping stronger weapons and gaining experience levels. Beyond that, there are many new additions to this entry which will be detailed below.

Open World Format: Unlike previous Dynasty Warriors games, Dynasty Warriors 9 follows an open world adventure format. Players can select different missions from the menu to advance the plot of the game or partake in optional side quests from villagers. Players can freely explore the land and engage in battles and other activities at their own pace.

Bow Attacks: This isn’t a new feature to Dynasty Warriors but there are some new features. Shooting a target in the head or while undetected and crouching can deal extra damage. There are also different types of arrows, such as poison, fire or exploding, and there are also dispersive arrows that may also have those effects but fire multiple arrows at once to hit multiple targets.

Concealment and Discovery: Using the Triangle/Y button the player can crouch, making them more difficult to be seen by the enemy. This allows the player to sneak around undetected and sometimes launch a stealth attack.

Fast Travel: With the world map as big as it is, this feature is virtually necessary. This allows the player to instantly travel to a previously visited location or mission objection.

Grappling Hook: This is one of the most convenient tools to enter into this franchise. Instead of having to hunt for an open gate or go through a series of events to clear a path, the player can grapple over walls to infiltrate enemy strongholds or simply run around rooftops for fun. This makes reaching a particular location so much easier.

Hunting/Fishing: These activities can gather crafting materials or fulfill quests given by villagers. There isn’t a whole lot to either of these activities, cast a fishing line with a lure in water and press Square/X when prompted to catch a fish. Hunting animals is simple a matter of finding deer, wolves, bears or tigers and attacking them, either with arrows or melee.

Hideaways: These are houses that can be purchased throughout the world map. Putting furniture in them allows different functions. Pots will allow the player to craft items, stoves allow cooking, bed allows the player to restore health and advance time, box/basket allows other officers to leave gifts and musical instruments allow the player to change the music. Additionally, letters can be sent to other officers to raise affinity level. These locations can also be used for fast travel.

Watchtower: Climbing up one of these will reveal clusters of various resources in the area, along with showing the locations of nearby castles.

Waymark: Touching one of these will display the surrounding area on the map and what sort of items can be found there, and sometimes can help shed light on where a player should travel next if their next object is unclear. These can also be used as reference points for fast travel. 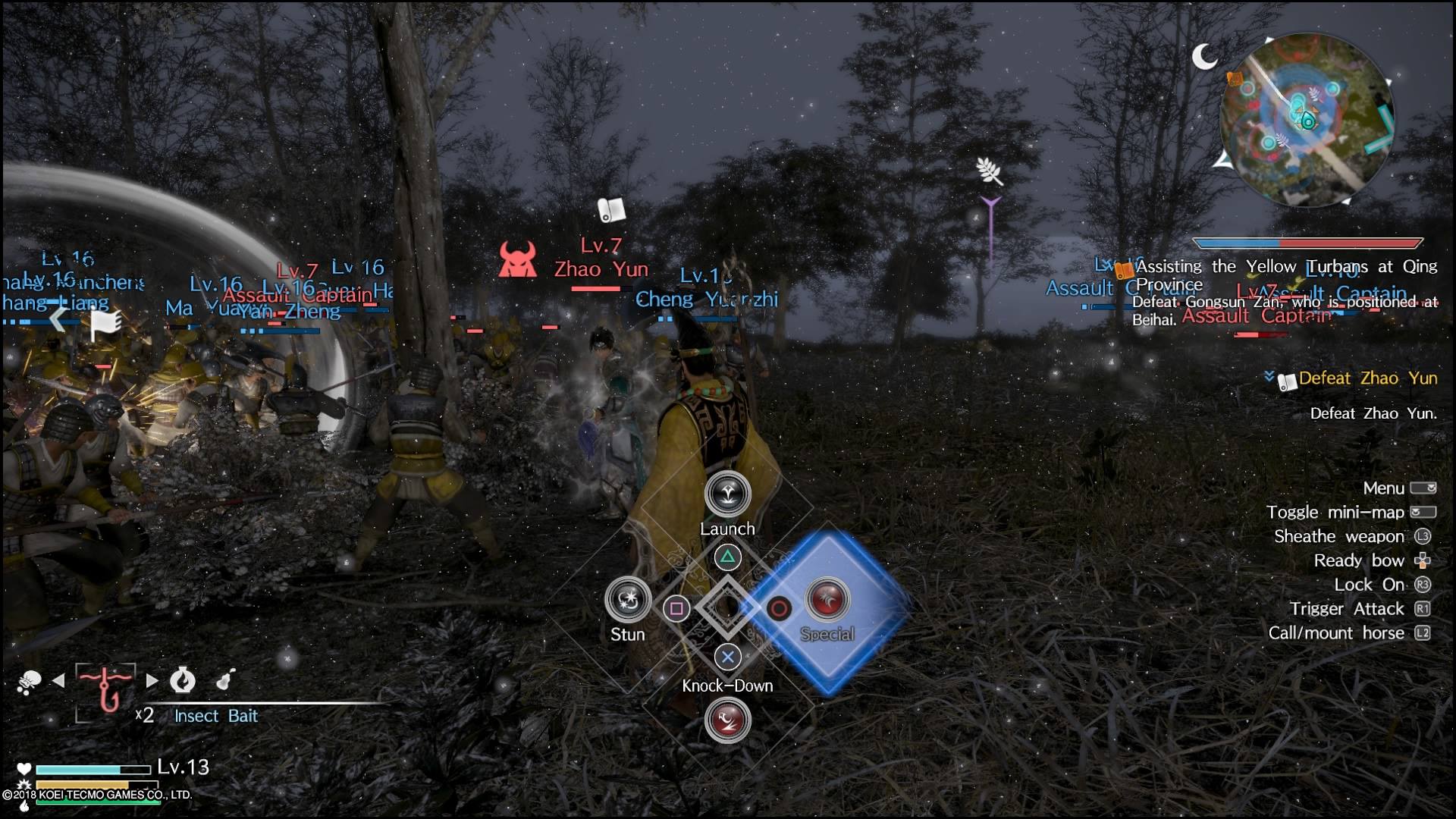 For the most part combat in Dynasty Warriors 9 is standard for the series, but there are some additional new abilities that have been worked into the system.

Trigger Attacks: These are special attacks that are activated by holding the right bumper and pressing any of the four action buttons. These can launch enemies into the air, stun them, knock them down or unleash a special attack. The buttons can be held down to charge the attack, making it more powerful.

Flow Attacks: These are combo attacks that can change depending on the enemy’s status. These can be quite deadly, especially if they are used to follow a trigger attack.

Reactive Attacks: These are context sensitive powerful attacks. These can be used when a Triangle/Y appears over an enemy and can be either deadly surprise assaults or counterattacks that can change the flow of battle. It’s generally a wise idea to use these at any given opportunity.

Special Attacks: These are trigger attacks done with the Circle/B button. These are essentially the equivalent of an area of effect musou attack that doesn’t drain the musou gauge. Equipping gems with elemental effects linked to this attack can make it even more effective.