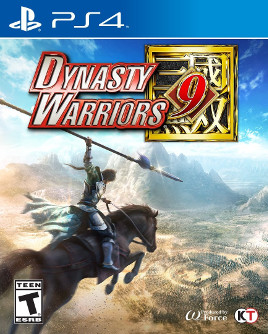 The problem any long-running franchise eventually has to face is that they will reach a point where whatever direction they go will be met with critical opposition. Each entry in the Dynasty Warriors shows some evolution of their formula or some new experimental feature, but at the core of each entry it is the story of Romance of the Three Kingdoms being presented in an action packed one versus one thousand format with the same characters and battles. The crossroads where Dynasty Warriors 9 found itself had two options, make what would essentially be Dynasty Warriors 2 Part 7 and be criticized for lack of innovation or make some significant changes to the formula to potentially revitalize the series but risk alienating the longtime loyal fans. The path they ended up taking was the third path down the middle, which is trying to walk the tightrope between those two possibilities.

For those unfamiliar with Dynasty Warriors titles, this franchise is based in the fourteenth century Romance of the Three Kingdoms novel, taking place during the Han Dynasty and Three Kingdoms periods of China during the years of 169 CE through 280 CE. The novel is based on myth, legend and historical events and the games take further creative liberties with the source material. The games have always focused on the great battles, turning one of the great works of Chinese literature in an action-packed yet simple hack and slash experience. These titles are fun, though are known for their repetitive gameplay and anyone who has played a Dynasty Warriors will know the general story. In Dynasty Warriors 9 players will once again witness the familiar events during the Han Dynasty through eyes of the three kingdoms of Wei, Wu and Shu. The Yellow Turban Rebellion needs to be suppressed, Dong Zhou’s tyranny needs to be overthrown — but everyone is afraid to battle his hired goon Lu Bu — and Zhuge Liang and Zhou Yu team up to activate their wonder twin powers to double team Cao Cao’s forces at the Battle of Chibi. The player is still acting as a third century Rambo taking on hundreds or thousands of enemies singlehandedly, but now this is done with an open-world format.

Dynasty Warriors 9 isn’t a bad game and it was actually enjoyable to play during the review process. The problem was as the game progressed and revealed more of the new ideas and features it became more and more apparent how much better the final product could have been. Traditionally, Dynasty Warriors games have the player select a character and depending on the particular entry play through that character’s or kingdom’s story with each level being centered around a specific battle or event. That aspect hasn’t changed, but instead of just being plopped into the middle of a battle, the player is now in a game that is designed to be more of an adventure than straight up action. 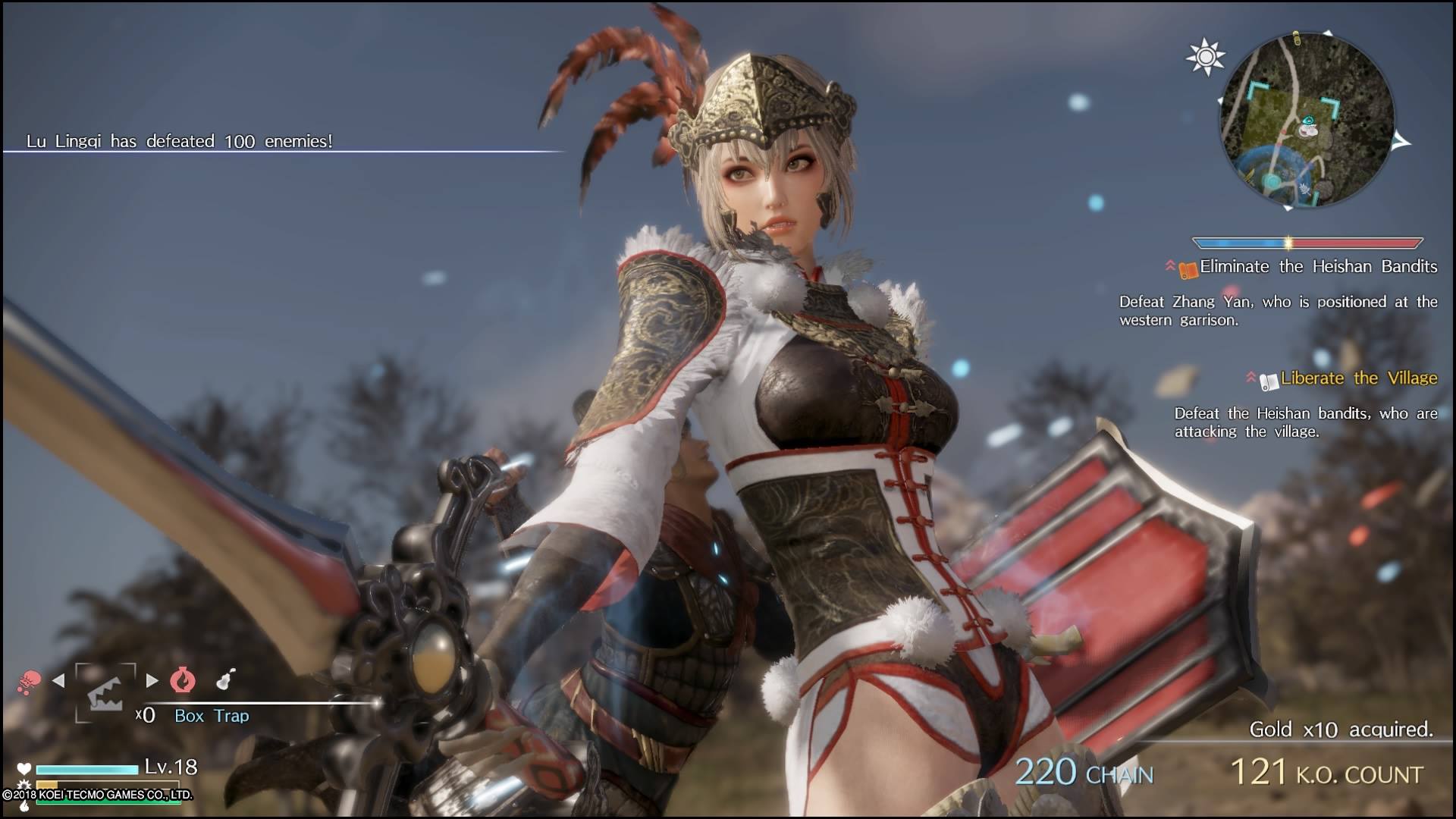 The player will typically begin each chapter in a town setting after some cutscenes explain what exactly is going on. Here the player can explore the town and talk to villagers who can give them side quests, such as going to kill an aggressive bear or group of bandits, give the location of a general that needs assistance or simply request the player catch three fish. The locations of these missions can be managed from the pause menu, which also includes the current main objection and other missions that either need to be done to further progress the story or can be done to increase the strength of the player’s army (or decrease the strength of the enemy). The player can then leave the safety of the village and go off to complete these tasks in the order they see fit. In most cases the player will end up with a KO in each chapter numbering into the thousands, but this will be accumulated throughout the chapter over several battles of varying size and intensity.

The world of Dynasty Warriors 9 is simply enormous. The tactical map will show an overview of land occupied by the player’s forces in blue and the enemy’s in red. There are bases scattered and anyone familiar with the series knows to just charge into them and defeat all the base captains to occupy it. The player won’t constantly be in a battle while running around in the world, but will frequently transition in and out of fighting situations. In addition to finding different groups of people to fight, exploring the land will allow the player to find various crafting resources for upgrading and making weapons along with crafting items to carry on their journey, such as strength or vitality potions. There are animals to hunt for resources and to acquire hunting points that can be exchanged for rewards and one of the simplest fishing minigames that a video game has ever seen. Thankfully the player has the option to fast travel to some previously discovered locations which can reduce the amount of travel time required to complete all the possible objectives. 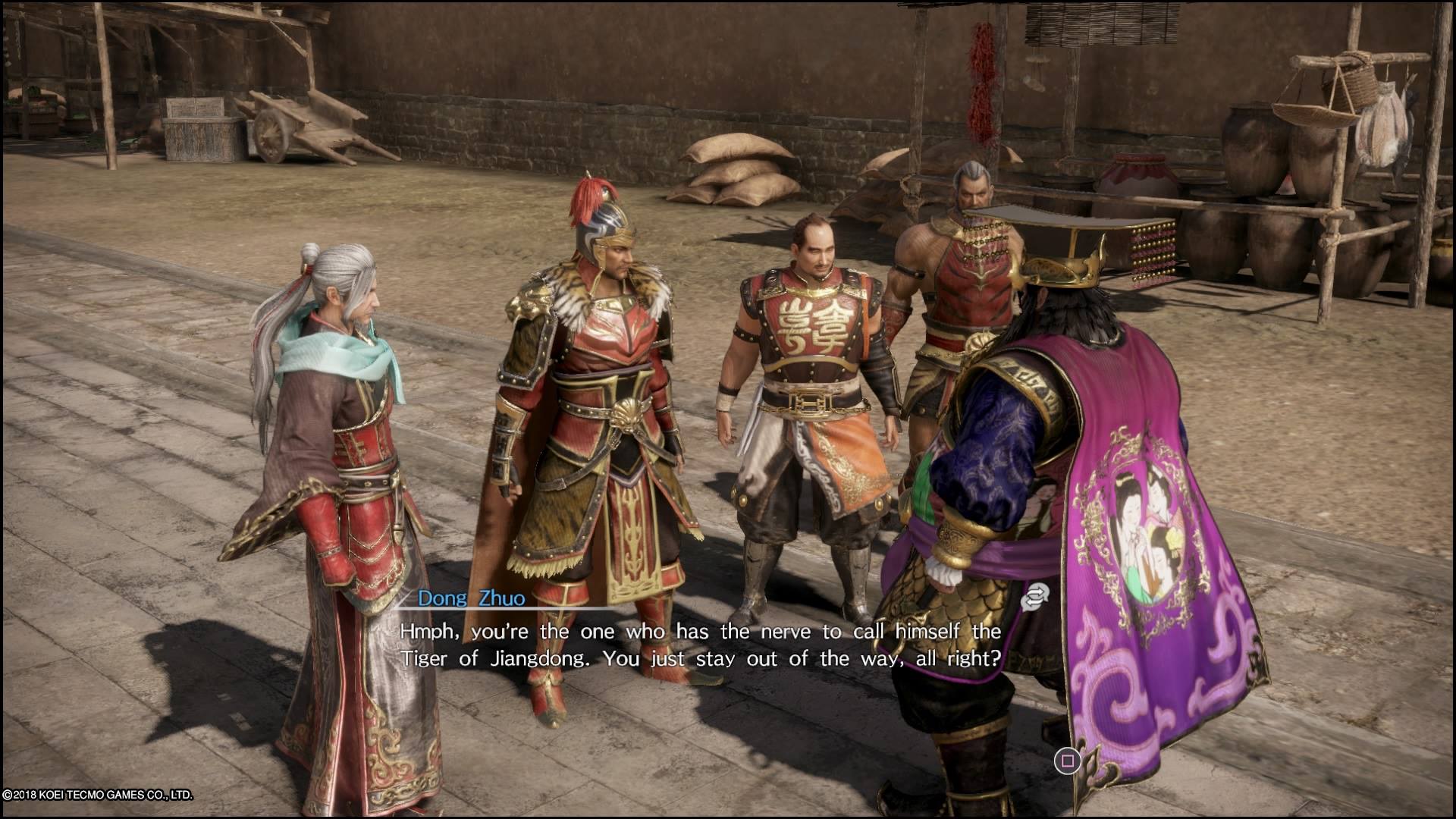 The open world approach is a nice feature and makes the world of Dynasty Warriors 9 feel more alive and some of the battles more dynamic and urgent. Its biggest downfall is how incomplete it actually feels compared to other open world games. This approach feels more like an outline or a good foundation to build on for making a fully realized open world Dynasty Warriors games. The village dialog is typically a generic statement like one would find in early RPGs and the quests given by villagers typically are not all that exciting with the inclusion of hunting and fishing not really adding anything of substance to the experience. The open world format has a lot of potential, and with further development could make for a truly amazing Dynasty Warriors 10, but as it currently stands it seems as though they didn’t take it far enough and the open world aspect feels like a low budget attempt at replicating a Ubisoft title. Even climbing a watchtower to survey the surrounding land has a similar visual effect to syncing Senu in Assassin’s Creed Origins.

On the flipside, this approach is a good vehicle for storytelling. Each new entry in the Dynasty Warriors franchise introduces new characters and fleshes out the story a little more than the previous title. Dynansty Warriors 9 continues this progression with a huge roster of characters and strong focus on storytelling. There are five total kingdoms available, but only Shu, Wei and Wu are available at the beginning. More characters will be become unlocked as the player progresses. The kingdom of Jin is unlocked after completing chapter six and the Other kingdom is unlocked after the first chapter, though obviously as the name implies this is not so much a kingdom as it is a catch all for characters that don’t belong to a kingdom such as Lu Linqui, Yuan Shao or Zhurong. 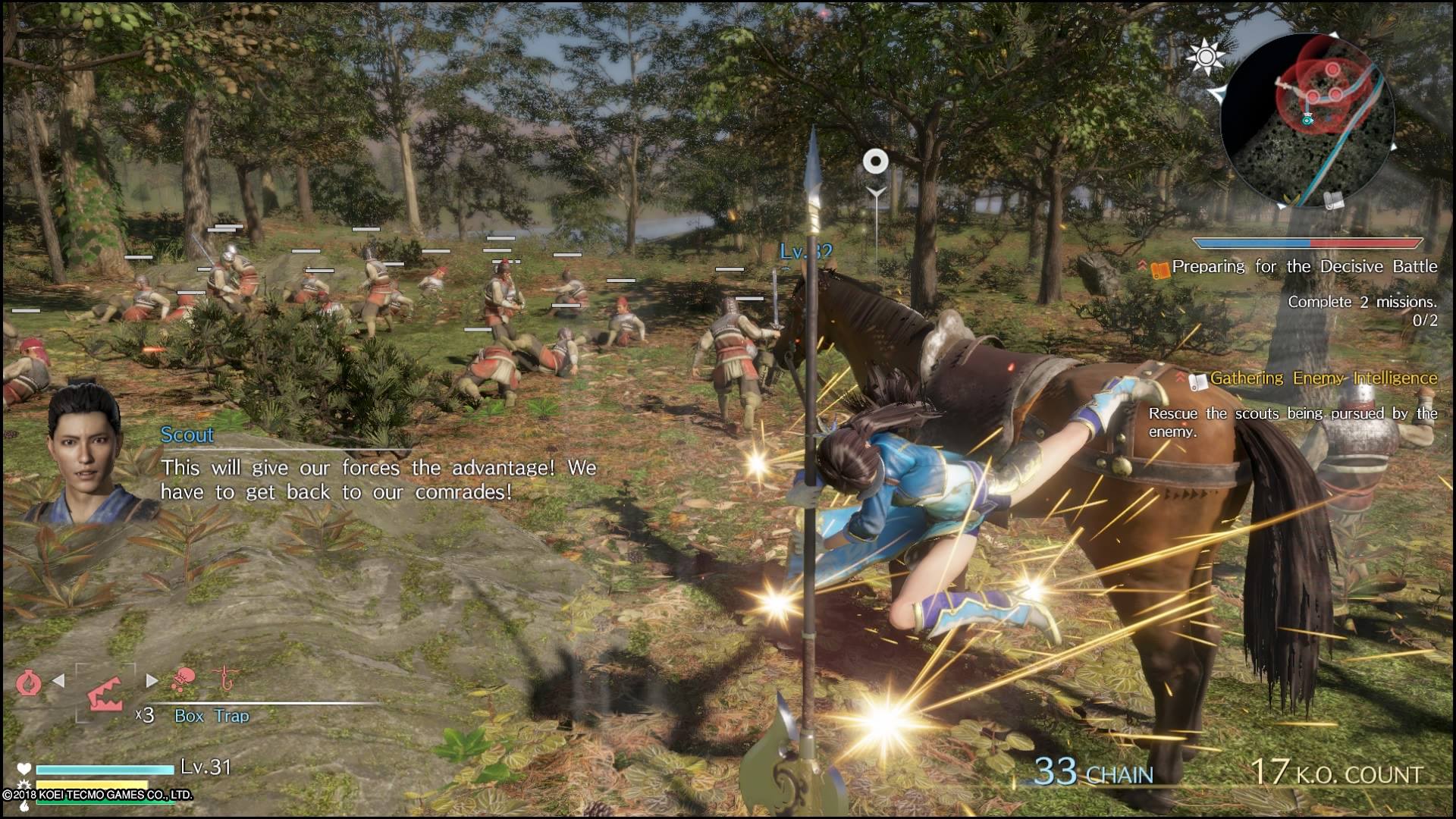 Dynasty Warriors 9 at times feels like it may be too ambitious for its own good. The character roster boasts a whopping 94 characters, each character with their own individual ending and story path. How many chapters a player has available to them is based on how long the character is supposed to survive in the context of the story, but even completing one chapter can take an hour if the player tries to rush through it. Most chapters will probably take two to three hours, though this can take even longer if the player wants to be a completionist or play on a harder difficulty where enemies take more hits to kill. The Dynasty Warriors fan part of me wants to complete each character’s story, but while Dynasty Warriors 9 is fun, it’s simply too repetitive and not interesting enough to justify the hundreds of hours of gameplay required to do that.

For the first time since Dynasty Warriors 2 this is a mainline Dynasty Warriors title that has no multiplayer. The multiplayer could have made the open world approach a lot more interesting, giving players the opportunity to storm an enemy base together or use a divide and conquer approach to map exploration. Playing with a friend has always been one of this franchise’s more enjoyable aspects and the exclusion of this feature greatly hurts the longevity here. There is a Free Mode that can be unlocked, but this mode is simply just playing any unlocked chapter with any unlocked character, which with the campaign being as large as it is, doesn’t offer a lot new to the experience. 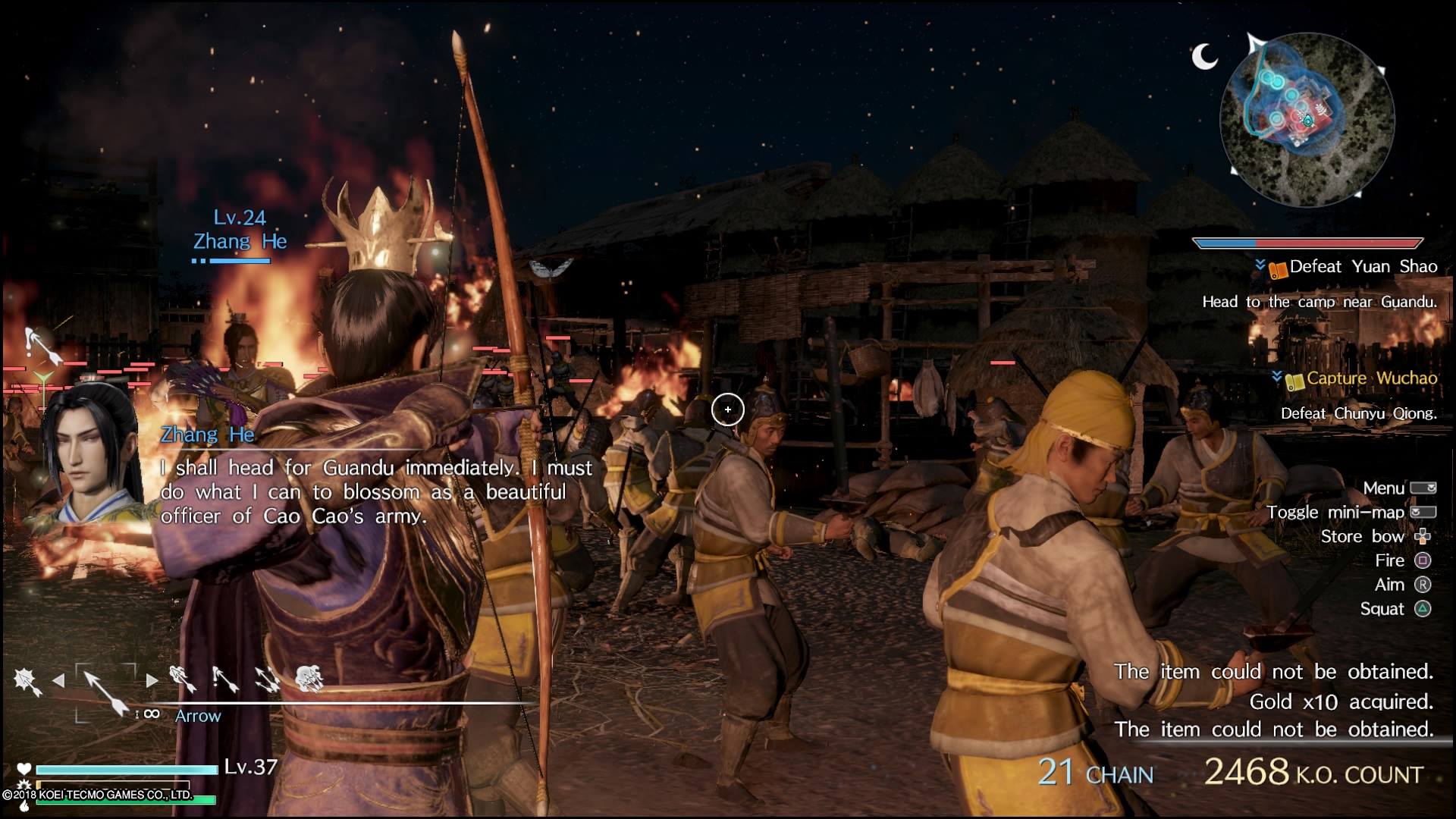 In addition to the open-world aspect, there’s been a couple significant changes to the core gameplay. The player can now execute special attacks that can be chained with additional attacks by holding the right trigger while attacking, along with an Arkham Asylum style counter move when prompted with the triangle/Y button. The best new feature is a grappling hook, which allows the player to scale walls and run around rooftops, making the endless search for an open gate largely a thing of the past. The triangle/Y button can also be used outside of combat to go into a crouch if the player wants to sneak around to make stealth attacks, though this feature felt like a weak attempt at stealth it didn’t seem very useful or practical even in situations where it was suggested. Long range bow and arrow attacks are available with specialized arrows, such as poison, dispersing, flaming and exploding, and enemy bases conveniently have explosive barrels which is always a fun inclusion.

The technical aspects of Dynasty Warriors 9 could be copy and pasted from any previous review. The character models look like their familiar designs updated for this newest entry. The music follows the typical guitar rock driven sound, though more subdued than some of the previous games. Dynasty Warriors has a long tradition of terrible English voice acting and fans who have come to appreciate the badness of it will not be disappointed. Xu Zhu still sounds like a stereotypical brainless oaf, Zhang He’s effeminate nature has been slightly toned down and Zhang Jiao addresses the strength of the Yellow Turbans with the authority of Marvin the Martian. The English voice cast once again delivers the cringe-worthy performance fans have come to expect. Dynasty Warriors games are notorious for visual hiccups thanks to the ridiculous amount of on screen enemies. In standard HD on a regular PlayStation 4, slowdown rarely occurred, though enemies had the standard issue of randomly appearing out of nowhere or vanishing into thin air mid fight. Playing in 4K on a PlayStation 4 Pro didn’t fare as well, where framerate drops were more frequent and bad checkerboard effects hampered the experience.

Dynasty Warriors 9 attempts to revitalize the franchise with a fresh approach to its standard formula and kind of succeeds. It’s fun yet flawed, and while it would be recommended to fans of this style, the recommendation comes with caveats. It doesn’t quite excel at being a traditional Dynasty Warriors game or taking the formula to a new open world format, but does a good enough job at both where it’s enjoyable but not exceptional. There are a lot of good ideas presented and it could be quite interesting with further development, but as it stands it feels like a last-gen attempt at open world. The lack of multiplayer is the biggest setback, and while it may have been difficult to work it into the open-world format, they could have added a mode similar to Conquest Mode from Dynasty Warriors 7. Fans of Warriors games will likely enjoy running through this title a few times provided they enjoy the single player experience, and being able to explore a familiar world at the player’s discretion is a nice change of pace. It’s fun to play through a few characters, but unfortunately the repetitive nature gives the enjoyment an expiration date and even the most devoted Dynasty Warriors fans will likely lose interest long before they’ve completed everyone’s story.