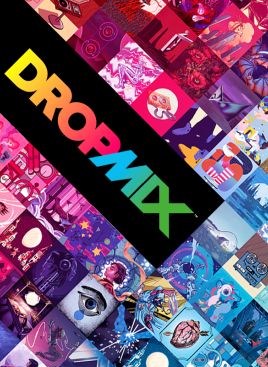 Well, we may be a bit late to the party on this one, since we didn’t expect things to fully take off with this game and didn’t prepare for any shipping hassle with a huge piece of plastic, but with Series 3 of the Discover Packs now having been recently released, there’s probably no better time to check out DropMix, the collectible card game/rhythm game hybrid from Harmonix and Hasbro that uses your mobile device to play. Now, I admit to not having been a huge fan of the integration between toys and games in recent years (Skylanders, Amiibo, etc), if only because they felt like gimmicks overshadowing the actual games, but I will say that after hours of play, I was taken by DropMix (which is another reason we were late: I was too addicted playing it to write a quick review, which you can take as a good sign).

The setup for DropMix simply involves using the game’s board as a play area to place down cards in one of five spaces (with your mobile device set down on it and running the app, connected via Bluetooth), with each card acting as part of a particular song. You have yellow cards for vocals, red cards for main instruments, blue cards for drums, and green cards for backing instruments, along with Wild Cards that can cover all four. Using either the four included base sets that come along with the board or one of the pre-packaged sets or packs, the game encourages you to team up with friends to create some impressive beats through its multiplayer games.

But let’s be honest here: while DropMix is also a party game with competitive modes that are best experienced with friends, its main draw is oh so very clearly the Freestyle mode, where you can construct your own compositions and mixes simply by placing your favorite cards on the board, which you can do with whatever combination of songs, artists and genres you see fit. So theoretically, you can mash up the likes of “Pony,” “Down With the Sickness,” “Call Me Maybe,” “Bust a Move” and the Doctor Who theme into your own twisted vision of an earworm. And by “theoretically,” I of course mean “that is exactly what I ended up doing:”

Yes, the Freestyle mode alone easily makes DropMix potentially worth a purchase, if only to experiment with such a massive amount of tunes. It’s just flat out fun to compose your own mixes, largely because Harmonix has perfectly set everything up so that seemingly any combination of cards works seamlessly. You just plunk down a card to begin, setting the basics with its own key and BPM, then build upon that with even more cards. You can also drop Wild Cards that introduce themselves with a slight snippet before taking over with their melodies or just hit the DropMix button on the board for a random BPM and key as a remix, if you’re a gambler. There’s no other way to put it, it’s just a simple, creative and damn fun way of making music, and should be applauded.

The only issue with Freestyle mode is that the Wild Cards can be tricky to work with. They do make sense when it comes to the competitive modes, obviously, but the problem is that while any regular cards can be played on any space in freestyle mode and produce the same instrument, Wild Cards immediately take on the properties of whatever color or colors of the space they’re on, meaning you have to work around that. So you can’t have, say, the vocals and bass from “Super Freak,” since red and green are on the opposite end of the board, nor can you have just the vocals from it, because yellow shares a space with red on the same board. So it does get slightly limiting at times, sadly.

Since it’s been brought up, we may as well discuss the multiplayer modes as well. Clash mode revolves around two to four players creating playlists/decks and playing cards on the appropriate colored spaces in order to earn points, having to top your opponents by playing cards of an equal or higher level, or playing power-up cards to gain an advantage. They can also use their turn to hit the DropMix button and remove all cards of a random value, but as the wheel that spins to determine this value has the highest value on half of it, it also ensures that simply showing up with the highest value cards is a bad strategy, and keeps things fresh.

Party mode, however, is one that can be played solo or with up to five players, and involves you all having to use cards from your decks to match requests from a virtual audience in time, either getting the right value, color or instrument, drawing cards in between rounds. It’s pretty much based on chance for a bit of it, though, so don’t expect a perfect run. Neither mode is revolutionary and each has particularly simple rules, but they still manage to be enjoyable (especially with the soundtrack constantly changing on the fly) and would be a hoot to play with friends.

Unsurprisingly, the soundtrack for DropMix is also excellent, albeit mostly stacked with Top 40 acts likely to repel certain older gamers like it was a cross being held up to a vampire (Meghan Trainor!! Imagine Dragons!! Skrillex!! HISSSS!!!). But as someone who doesn’t have much of an issue with most of the songs, I felt it was a good batch to work with (and it helps that you can just opt to just use cards with the parts that you like). That said, in my own personal opinion, Harmonix are at their best when there’s a sense of discovering new artists and songs within their games you may not have heard of or forgotten, and are at their worst when in a generic “the hits, and nothing but the hits” mode like a classic rock station, so finding that most of the non-famous acts here are just fake acts created by Harmonix takes the wind out of the sails a bit, though it doesn’t do that much harm. Still, given that the targeted age for the game is sixteen and up, why not go for a few relatively deeper cuts older audiences may respect?

The visuals, though, aren’t much in the game itself…which is understandable, since lavish graphics aren’t exactly required for the setup here. The cards, however, have some rather amazing artwork, perfectly matching their respective genres, and having the same artists and themes for all cards in a certain song, and even managing to be perfectly color-coded without losing visual appeal. It’s terrific stuff that feels worthy of album covers by themselves and even guarantees just browsing through your deck is a bit of a delight.

If there is one particular annoyance (aside from some technical issues at times, especially when trying to initially use my Android phone), it’s the game’s video sharing. See, with the ability to create your own mixes, it’s only natural that you would want to share them with your friends, and can do so either by creating links that can be opened in the app (which you don’t even need the board for to use for listening) or saving the video to your mobile device (which didn’t work on the version for my iPad, for some reason). It’s a terrific idea, although mixes shared in the app share the same space as the ones you create, and there annoyingly seem to be no organization options.

You may have also noticed that I’ve peppered the review here with captured videos of my own mixes to show what the game is capable of. Despite most tunes lasting well over a minute, however, videos captured in DropMix only record the first thirty seconds of the song, which in some cases even ends before a chorus can begin. I realize you’re going to want to emphasize using the app more, but not having the option to record the full mix feels rather petty and unnecessary, forcing people to only be able to listen to them on Android or iOS devices. It’s arguably a minor issue, yes, but I just don’t see any reasons to not make the sharing options equal.

Finally, I should probably address the fact that as this is still a game that you need to buy physical cards for (in either Discover Packs of five or Playlist Packs of fifteen, with no random inclusions), there is a bit of an issue in actually obtaining the goods needed. I live in a relatively small town in Canada, and as far I can tell, we only have one retailer – Toys R Us – that sells DropMix cards, so what I can pick up is limited to what they have and they didn’t even have the Series 3 Discover Packs right now that prompted this review. For that matter, one of the game’s Playlist Packs – “Flawless” – is exclusive to Target…and Target Canada closed all of its stores three years ago (so there evidently are some flaws). And yes, I am aware that online shopping exists, but it’s still annoying and some of us would prefer to not pay shipping costs or such as well. It may just be the principle of the thing, but it’s still an issue.

Despite a few flaws and annoyances, it needs to be repeated: DropMix is just plain fun. It’s a damn good rhythm game with some amazing music that encourages creativity and has you achieve this goal in a particularly clever way. Heck, it says a lot that even after going through all of the included cards and still having a ton of fun, I was more than willing to pick up a few more packs with money from my own pocket. But regardless of what cards you decide to go with or how you decide to play, it’s an excellent rhythm game guaranteed to keep you hooked for a long time. Now to just hope for more choice cards in the future…