Poor Wanda. She thought I was running out of games to make her play on the modern consoles we keep upstairs, but thanks to the Super Retro Trio Plus establishing residency in our living room now there is a whole new set of games we can play without going into the fabled Crust Room. The first game we played together was something I bought from someone in high school for the archaic Sega Genesis. I paid five dollars for this game, five American dollars, though some people (like Wanda) say I overpaid. This game was none other than the classic Two Crude Dudes.

Two Crude Dudes is a port of the arcade game Crude Buster. I like to imagine the creation of the game was someone trying to make a sequel to Bad Dudes except making it much cheesier and remove any semblance of anything that could make any reasonable person take the game seriously. Sometime in the future (the year 2010) New York City gets nuked by some unknown force. Twenty years later, because that’s how long it takes for a nuclear blast site to naturally decontaminate, the rebuilding process begins but some terrible group of thugs called Big Valley invades and takes over. The government doesn’t want to buy into any of Big Valley’s nonsense so they hire the Two Crude Dudes to go in take care of business and they will pay them well for their services. How I miss the golden age of video game storytelling.

Two Crude Dudes is arcade, 2D beat ’em up co-op mayhem that makes The Expendables look like Casablanca. The two heroes appear to be punk rocker identical twins that stand approximately eight feet tall and eat Met-Rx brand breakfast cereal with whey protein shakes in lieu of milk with creatine sprinkled on top in the place of sugar. This is before these vested shirtless goons go to 25 Hour Fitness (one extra hour for working out) before injecting copious amounts of steroids directly into their eyeballs, which is why they have to wear sunglasses to cover the track marks. 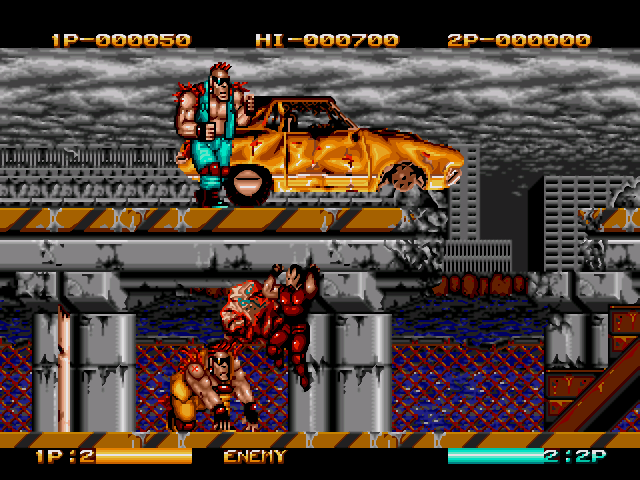 The game begins in the ruins of New York City, where the duo of unrefined fellows punch and kick the random enemies into oblivion. Or throw broken down cars at them, which is one of the highlights of this title. There are plenty of strange enemies to fight in this game, like a miniature purple Santa Claus that throws hand grenades or a ten foot tall dude with sickle blades for hands. The boss of the first level is basically someone cosplaying as Jake “The Snake” Roberts and later on there is some horrible guy who looks a lot more like Peter Parker would if a radioactive spider actually bit him. Mutants, cyborgs and random thugs make up the myriad of enemies that need to be busted. Either in spite of or because of its ridiculousness, this is actually a fun title in all the dumbest ways possible. Wanda even stated she can see why I enjoy this game, though I’m not exactly sure this is a positive observation.

It has been said that New Super Mario Bros. Wii has a co-op mode that will put the strength of any relationship to the test, but any hardcore gamers know that is the video game relationship test easy mode. If your relationship can survive a few rounds of co-op Battletoads on the NES, you may very have found your soul mate. Battletoads, not to be confused with Battletoads for the Game Boy, was quite an ambitious and amphibious game for its time. Some levels are traditional beat ’em up affairs, while others are more focused on tricky platforming, descending through a tunnel or trying not to die on a speeder bike. Some levels are great for co-op, others go out of their way to make a game that is almost impossible to finish on single player completely impossible to finish on multiplayer. 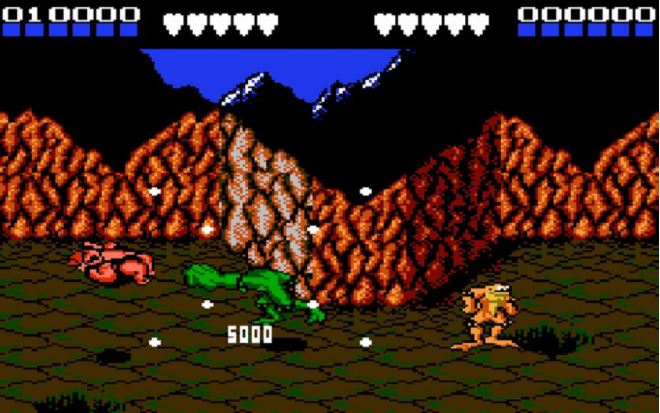 On top of the sheer difficulty, Battletoads has other factors that make two player mode more difficult. Friendly fire is enabled, and whenever one player loses their lives and has to continue, both players start at the beginning of the level. If two players are able to complete the third level, Turbo Tunnel, watching them would be like watching synchronized swimming in the Olympics. Completing this level with two players also requires the same amount of training as it takes to get to the Olympics.

Now remember Wanda isn’t much of a gamer; this is an activity that she more or less suffers through so I can write these monthly columns. Not used to playing this game, she accidentally killed my toad quite a bit. Or at least she claims accidental. I have my doubts and suspicions she was probably just practicing getting comfortable saying “accidental” in case these columns suddenly disappear and finds herself using that word in a court room. She did seem to enjoy the ram horns and giant boot when she blasted me off the screen so at least she was having some fun there. That’s okay, I got her back in the second level when I got the beak sword and “accidentally” cut the rope she was dangling from. 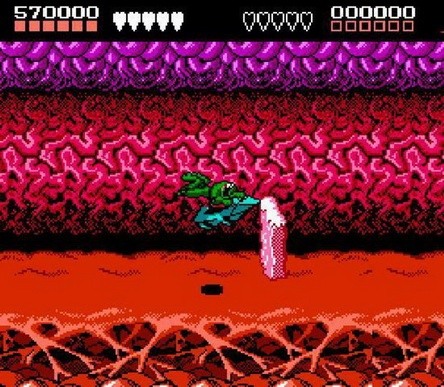 Which brings us to the Turbo Tunnel. We are not Olympic athletes. In fact, even when I played this game regularly I couldn’t always get past this level and usually would try to hit the warp zone since that seemed easier than trying to complete it. We did not even make it anywhere near the warp zone. I would like to blame all our failures on this level on her but that would be dishonest since my performance was pretty abysmal as well. We tried getting through the Turbo Tunnel a few times but it just wasn’t going to happen. But the important thing is we played a bunch of Battletoads and only killed each other in the game, so I’m taking our playing the game is a testament to the strength of our relationship.