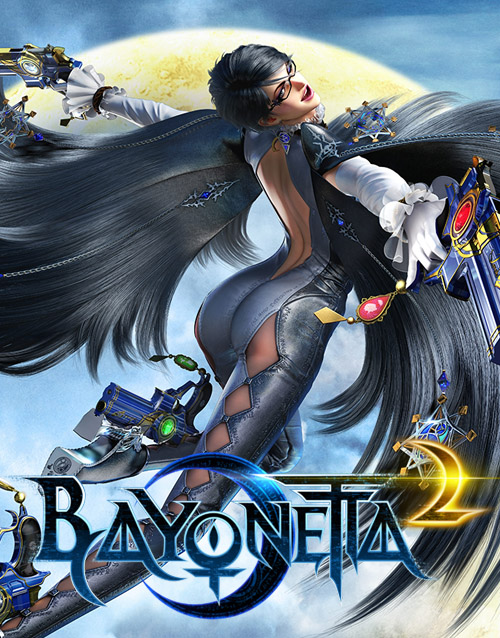 Who would have ever thought Nintendo would publish a game such as Bayonetta? This is a game known for its violent and sexual nature, and yet Nintendo saw something in it that they bankrolled a sequel. That’s more than Sega seemed to be interested in and thus we have received one of the best Wii U exclusives in Bayonetta 2. Despite having a strong lineup of first-party exclusives, since Nintendo’s last platform didn’t do as well as anyone would have hoped for, it only seems natural that the Japanese giant would bring over the bodacious heroine to a more successful and flourishing system in the Switch. Just as it was released on Wii U, not only do you get Bayonetta 2, but you get it predecessor packed in as well. In doing so, Nintendo has created an incredible value that seems perfect for the console-handheld hybrid.

Bayonetta‘s story is far more compelling than its sequel, which is a weird thing to say considering it’s not like this is a franchise known for its rich plot. There’s just not a lot here, and what’s available is borderline incomprehensible at times, but maybe that’s for the best because where the game excels is in its ridiculous events. Essentially, you play as an Umbral Witch named Bayonetta who is stricken with amnesia as a battle against the Angels of Paradiso rages on. Are you scratching your head already? Well don’t worry, the progression of the plot isn’t any better and doesn’t help clear up a lot of what’s going on as you push forward and its sequel is no better. In Bayonetta 2, the ashen Witch Jeanne heroically saves Bayonetta from an out-of-control demon our own heroine conjured, only for her soul to be dragged down into Inferno. The fact we finally get to go down into Inferno opens up the possibilities of expanding upon the universe dramatically, but I barely was able to get a grasp of the scope and horror that was essentially Hell. PlatinumGames gives us a peek at what the worlds consist of, but even then, they are vague and poorly told. There just doesn’t seem to be a hierarchy of things on either side of Inferno and Paradiso, as it’s utter chaos, which is a weird thing to say considering that’s what the antagonist of Bayonetta 2 continued to describe humanity as. 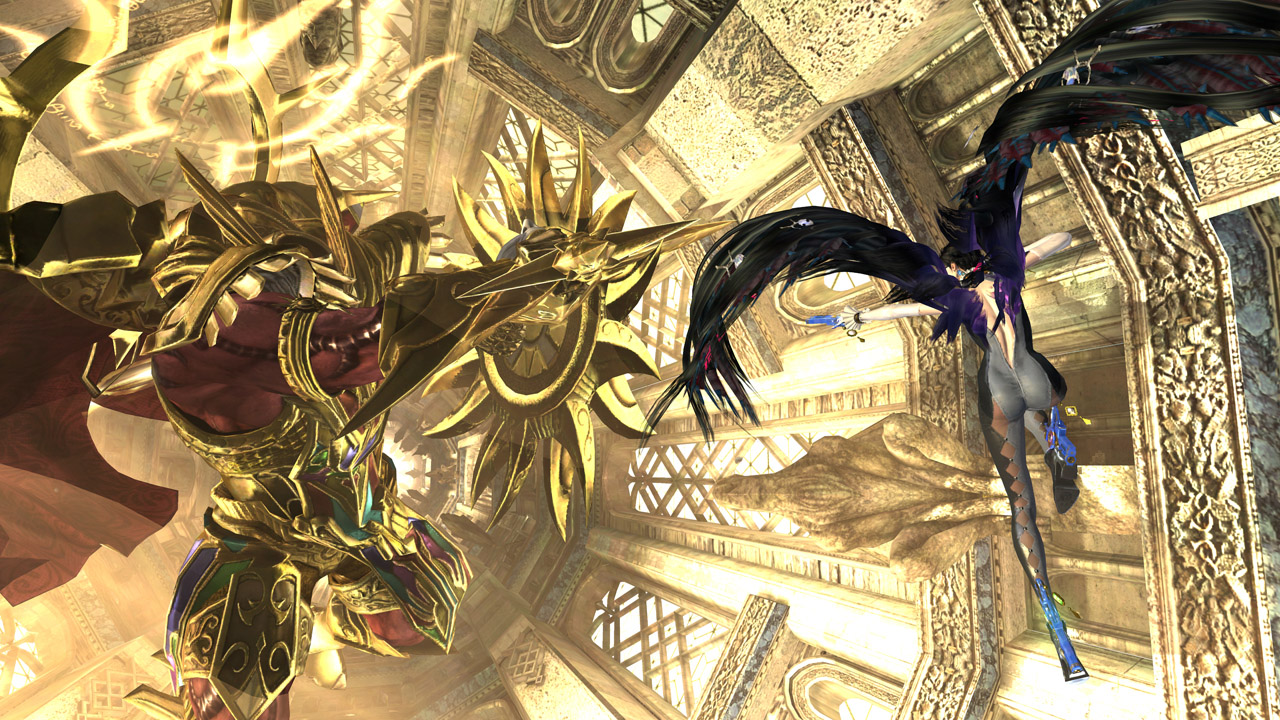 While the plot of the first game is superior to the second (which isn’t actually saying much), the opposite can be said about the gameplay. From the first chapter, it’s immediately apparent how much better Bayonetta 2 is, as it’s more fluid and dramatically faster. This might have to do with Bayonetta herself retaining all of the powers she obtained in the first game; that’s not say the first installment is slow by any means, but having the ability to turn into a panther right from the get go sets the momentum moving forward. Bayonetta 2 in general is one of the better character action games on the market, offering fast-paced and intense gameplay from start to finish. There are a handful of slow moments, and some of the chapters are just straight up boss fights, but there’s not a single moment where you’ll find yourself bored. This is primarily thanks to the outlandish and extravagant events that occur throughout each campaign, but most especially the sequel. You’ll be surfing a tsunami-sized vortex as a giant serpent berates you with colossal buildings, crossing swords with an Angelic Lumen Sage while two giants fight in the backgrounds, riding on top of a fighter jet in a Galaga-esque mini-game and so forth. There’s no shortage of bizarre, yet incredibly exciting scenarios Bayonetta is put in, and it ends up being just plain fun.

Bayonetta 2 is more refined and polished game than its predecessor, coming in with numerous improvements that enhance the overall experience. For starters, quick time events have been removed, or at least the ones that could lead to an instant death. Umbran Climax is one of the best additions as it doesn’t force players to use a torture attack when their magic bar is full, and instead can unleash some spectacularly flashy and devastating combos, all while summoning demons in the process. A cooperative mode has also been added so you can face off against bosses and hordes of enemies with your friends. While Bayonetta has a lot of style, there’s an incredible number of costumes to obtain and it helps that the first game benefits from some Nintendo exclusives. And there’s just so much more. Unfortunately, there are some components that took a hit in the process. For starters, Bayonetta 2 isn’t all that challenging. PlatinumGames implemented a more timing-based combat system that requires more skill than your average character action game, but we had no trouble running through the sixteen chapters, something that can’t be said about its predecessor. The targeting system could also use some work as there were a number of times where we found ourselves targeting an enemy not even on screen or in the general vicinity. Finally, while mostly fine, the camera can get in some unfortunate positions at times. Regardless, Bayonetta 2 is a far more rewarding and rich experience. 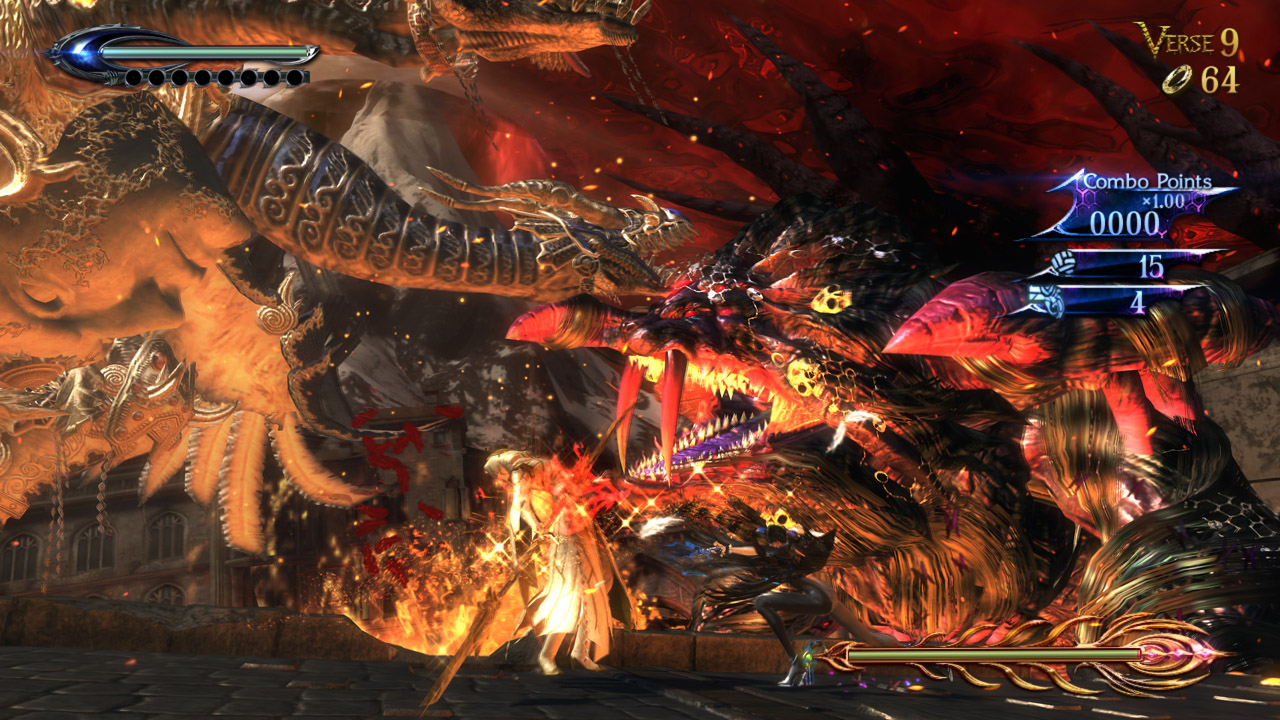 One of the surprisingly pleasant changes to Bayonetta 2 are the enemy designs. While the first game had plenty of unique and grotesque interpretations of angels of heaven (Paradiso), the sequel not only steps up the creepiness, but introduces creatures from Inferno. This allows PlatinumGames to flex their creative guns and create levels and creatures that resemble that of Devil May Cry. While Paradiso is glistening in clean white and gold, Inferno is all about the grim red and black palette, a stark contrast between the two. These demos might only appear in a specific section of the campaign, but they stand out, even though Inferno itself seems bland and uninteresting as a whole. Outside of that, still sticking with designs, the overly-sexualized manner of Bayonetta has also been toned down in the sequel. It starts off with Bayonetta essentially stripping and the camera focusing on specific parts of the body, but interestingly enough, this only happens near the beginning of the story, with the rest of the experience focusing more on Bayonetta’s ability to kick ass in style. The rest of the characters have been somewhat reworked, such as Luka having more stylish clothing and Rodin pulling off the kimono nicely.

The transition onto the Nintendo Switch has gone fairly well for PlatinumGames’ heroine. Both Bayonetta and its sequel looks very similar to their Wii U counterparts, to the point of a bit of disappointment. The visuals don’t look to have changed much and the newer versions render at the same 720p resolution, both on handheld and docked mode. The former is a much preferred means of play thanks to the image quality looking drastically better, but there is one aspect where PlatinumGames has utilized the new console’s power: frame rate. In docked mode, both games run beautifully with barely any noticeable decreases from 60 FPS. The portable mode sees its share of drops, but they still never reached anywhere near unplayable territory, always seeming to stay above 30 FPS, generally hitting 60 when in less action-intense areas. Graphically, the duo aren’t technical masterpieces, with a lot of environmental structures looking plain in spots and the first game utilizing a dull color scheme. Fortunately, Bayonetta 2 is artistically vibrant with strong use of color and well designed creatures. 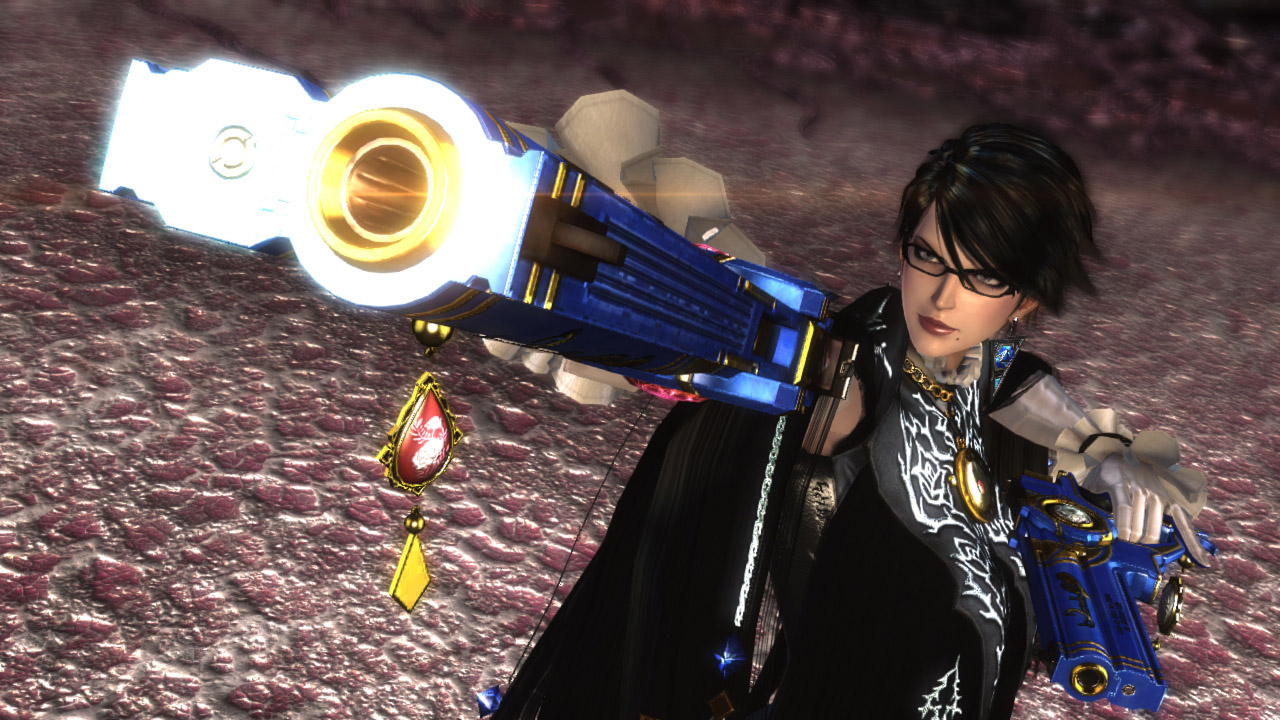 The first Bayonetta is slowly showing its age, but its more robust sequel remains at the top of its game. It contains some of the best combat mechanics that are perfectly integrated in the most over-the-top, outlandish scenarios. It’s stylish, frantic and oddly addicting. Unfortunately, the story may as well be non-existent and the voice acting from characters such as the newly-introduced Loki will make you want to skip cutscenes. It doesn’t help when you hear the brat calling Bayonetta “Love” every second sentence and cussing every scene. Regardless, it’s all about the craziness that PlatinumGames usually brings to their games and they’ve hit it out of the park with Bayonetta 2. They refined the formula with the sequel, creating a top-tier action game that shouldn’t be overlooked. It may not be perfect, but this is a solid remaster that more players need to experience, and considering you get two games for the price of one, this ends up being an incredibly appealing package.