As great as the third entry in the Road Rash series was, its best overall game was the 32-bit incarnation that saw a wide variety of ports and variants. It debuted on the 3DO in 1994 and later saw a toned-down port on the Sega CD and versions on the PlayStation and Saturn. The core concept is the same as other Road Rash games and sees you beat up enemies en route to what you hope is a victory. While the 16-bit entries executed the concept well, they were greatly hurt by iffy framerate. An increase in weapon selection and maps helped as time went on, but the concept itself didn’t feel like it would have a lot of legs as the industry marched forward in the mid ’90s.

Everything was moving towards 3D, and Road Rash’s idea of beating people up and then winning races seemed a bit old-hat. At the time, the 32-bit version was well-received, but time has been much kinder to this entry than any 32 or 64-bit version of the game. The 16-bit versions were a lot of fun, but plagued by slow framerates and occasional slowdown. The music was also a major hindrance in both menus and in the game itself.  Scratchy audio and sub-par tunes made getting through the games a little tougher than they needed to be. Fortunately, the 32-bit incarnation features not only dramatic increases in music and sound quality, but in the core gameplay as well. 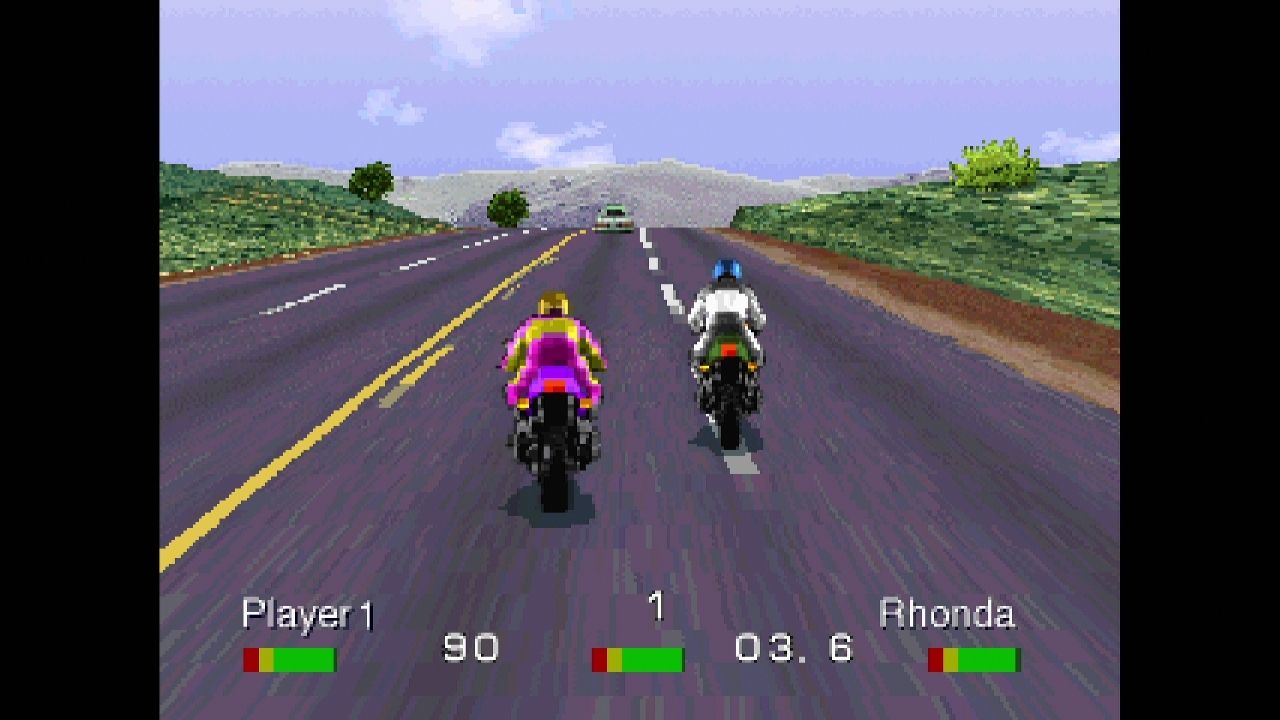 The initial games featured a control scheme was was fine for three button controller, but the 32-bit version offers up something that wound up being a huge blessing – shoulder button controls for attacks. Now, you could just logically attack either left or right with a certain shoulder button instead of a single button and having that attack area change depending on what side an enemy was on.  The revamped controls make attacking much easier to time — and everything involving the slow pace of prior entries has been solved with a much smoother and rock-solid framerate. Slowdown is a thing of the past and in its place is a slickly-crafted game that manages to blend a punk-rock look and feel with surprisingly sharp action.

Weapon selection isn’t quite as robust as before — with things like tasers being removed in favor of keeping things simple with clubs, crowbars and chains. Streamlining the weapons hurts things a bit, but the far smoother gameplay easily makes up for this issue. Racing and fighting have never been done better either before or since within the franchise. Each blow now clearly rocks your rival’s heads back and you can send them spiraling out of control with a few well-timed cracks to the skull. Beating up cops and taking them off of their bikes is now possible, adding a new wrinkle to things since you now have a way to avoid being arrested if you get knocked off your bike. If you’re lucky, that will happen when a cop has been knocked off of his bike, giving you some leeway. 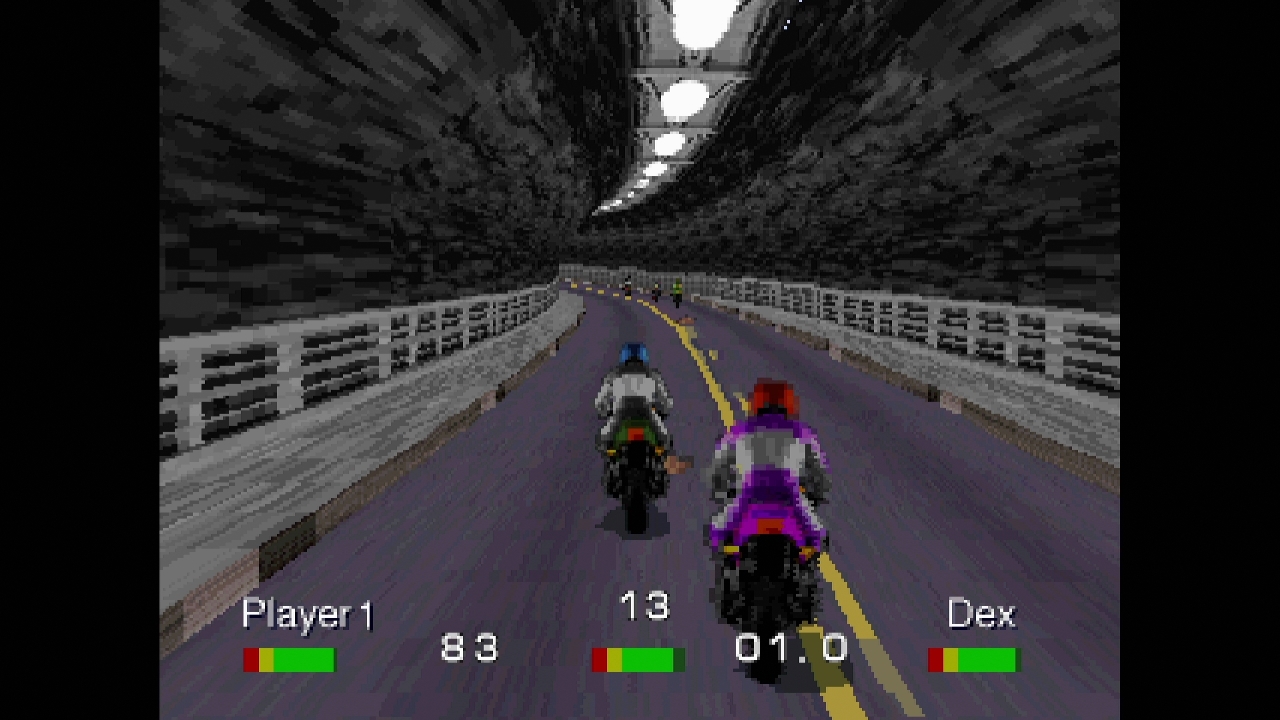 Course selection is far more robust in this entry, with bustling cities, beautiful farm land and beachside areas to race in. Each area feels completely different thanks to its environment — with things like skyscrapers littering the city areas, while the beachside areas are filled with sand and water near the track. Large mountain ranges are also in the mix, offering up much-needed variety from the likes of the palette-swapped stages from the Genesis days that looked somewhat different, but didn’t really feel different. Now, thanks to each area being so different in its design, each place seems unique and requires you to play a bit differently.

The farm land areas feature a bit less traffic than the city, where you will need to be on your toes at all times due to so many cars being around. As is tradition, traffic doesn’t just hit you but rivals as well and can lead to some hilarious scenarios where an enemy gets hit bit a single car several times in rapid succession. Nothing tops destroying an enemy yourself though — especially if you manage to knock them out on the final turn of a track. The courses themselves now go on for much longer than before while a handy graphic lets you know how much distance you will be traveling to give you an idea of just when you need to either make sure to win quickly or pack it in and hope for a better result next time. 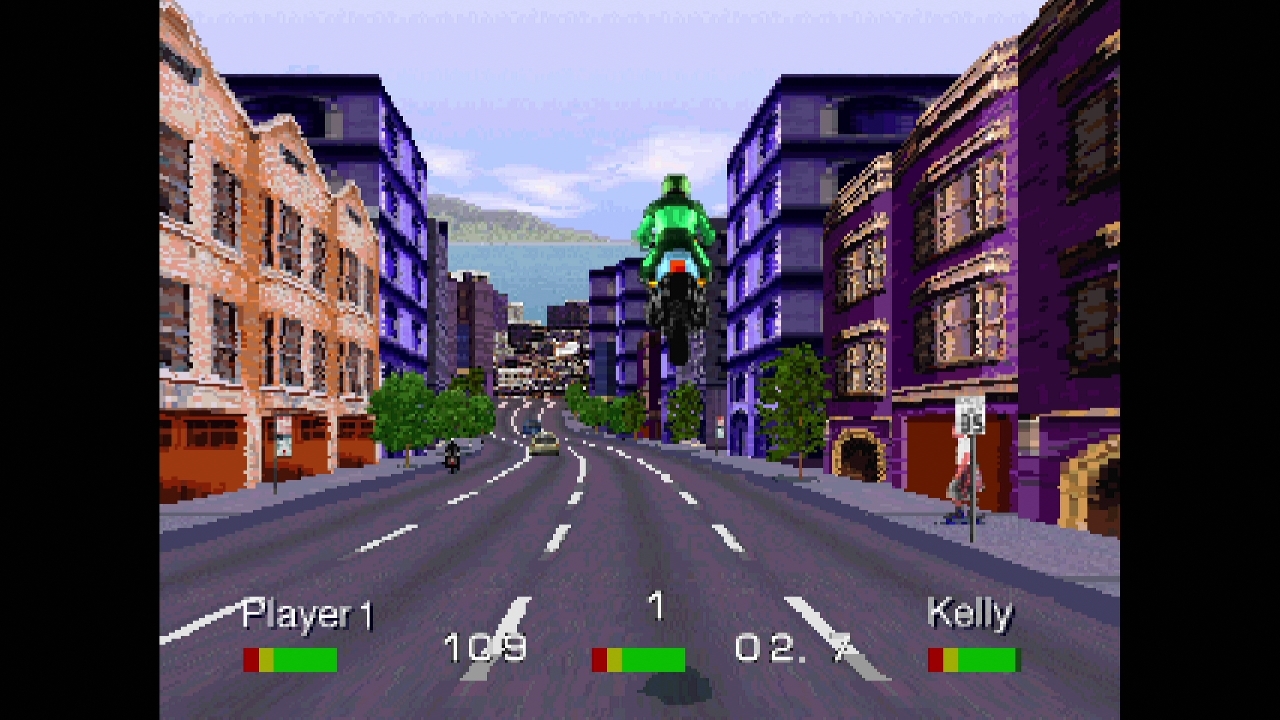 Road Rash’s revamp extends to every major part of the presentation – from the core game itself, to the menus and the overall comedy. Before, you had tiny animated cinematics that either showed you experiencing the thrill of victory with a successful ramp jump or maybe failure via a dog peeing on you. Now, you get wacky caricatures declaring you a winner alongside some quick FMV sequences. These aren’t just a matter of being better or worse than what was done before — they’re just different, and do sum up the FMV-crazed ’90s fairly well.

Visually, Road Rash has aged shockingly well for a game that came out so early in the life cycle of the 32-bit era. The characters have a lot more detail than before, but the biggest improvements lie in framerate and overall appearance of the stages. Each environment has a lot of detail and while quite pixelated, it’s impressive to see just what they were trying to do to make it feel like you were playing in a real-world area. Animations for attacks haven’t been smoothed out at all, which is probably for the best since it makes timing attacks and timing when to avoid attacks and grab weapons much easier. 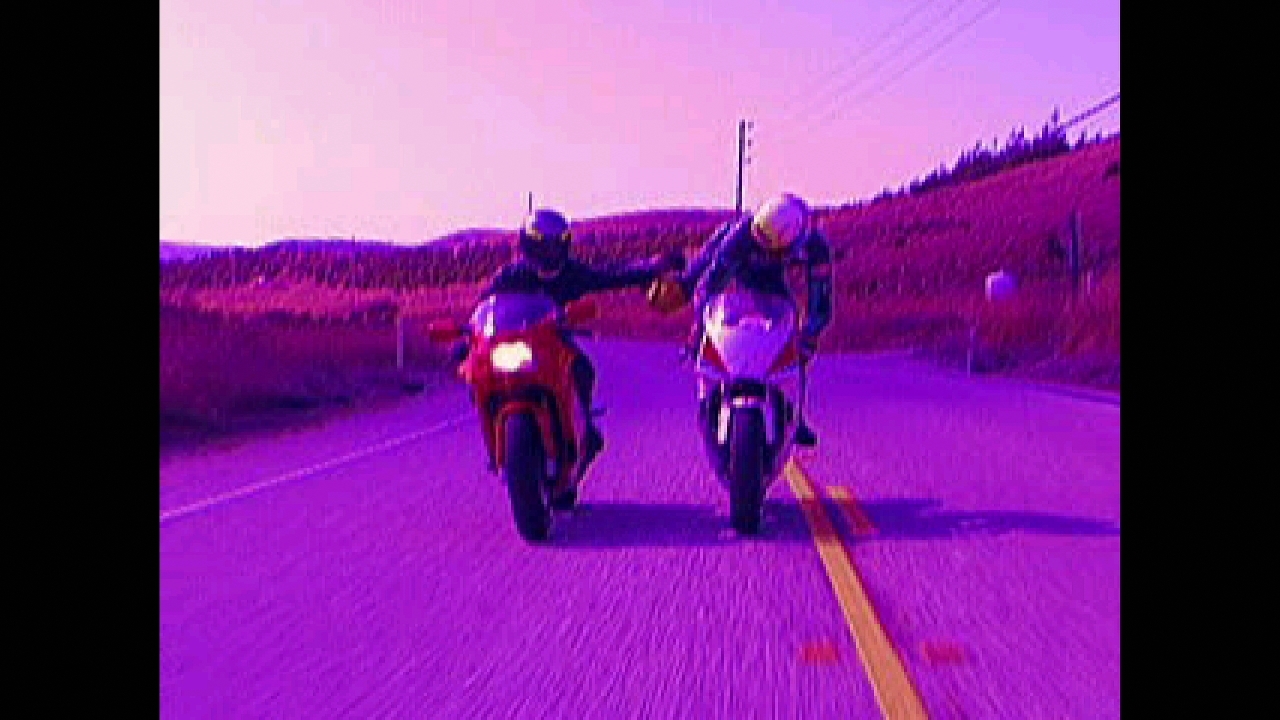 The soundrack features quite a few licensed songs for the time, but sadly, none of it is heard in the game in the 32-bit versions. It does make going through menus to buy bikes and change up the options a bit far more fun though. Soundgarden, Monster Magnet and Hammerbox are just a few of the bands featured and offer up a hard rock feel to the biker-centric game. The sound effect work remains solid, with more powerful effects being used for weapons and screams that do get across the damage being done better.

While the Road Rash series limped on for a while, none quite captured the magic in this entry. It was the swan song for the franchise when it came to being a revered, critically-acclaimed game. The PS1 version is the most common and will only set you back about $20 now. It’s easily playable on a PS3 and well-worth buying for anyone who loved the Genesis games. If you haven’t played a Road Rash game before, it’s also a perfect starting point given how much more polished it is than its 16-bit predecessors. 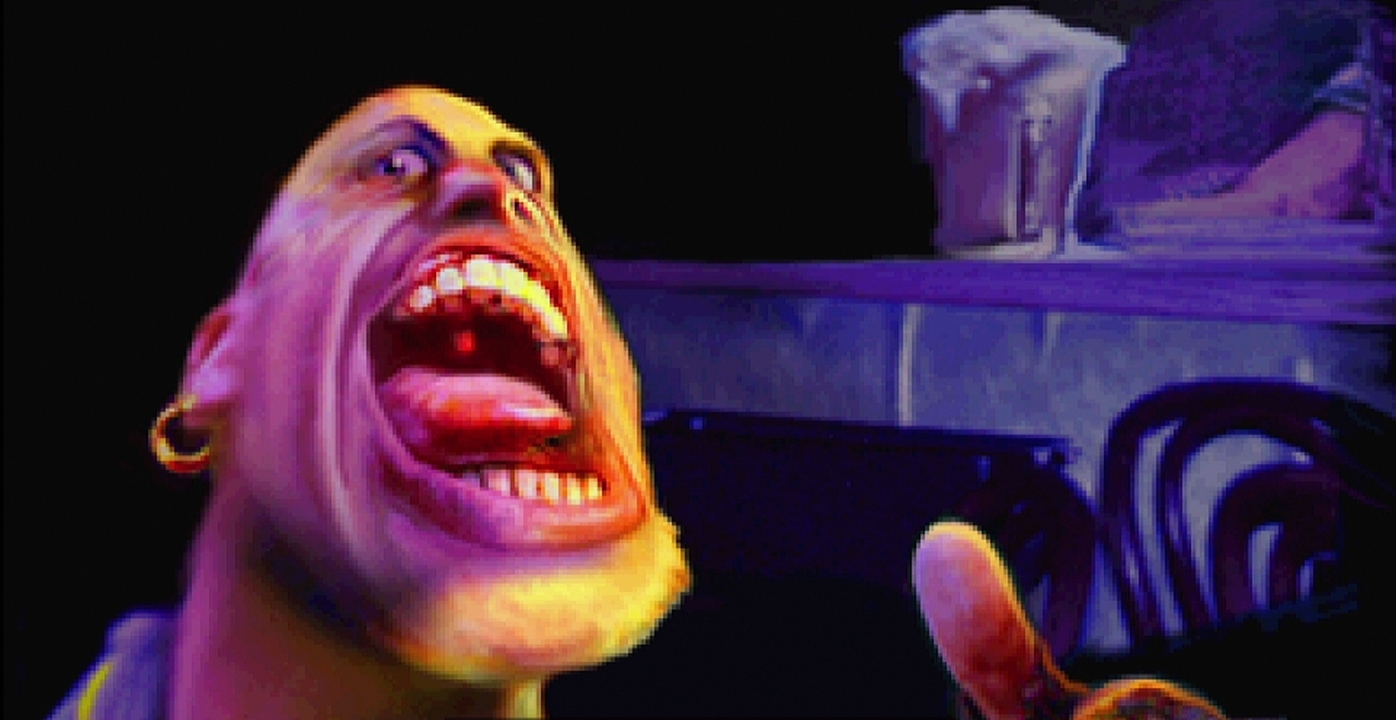