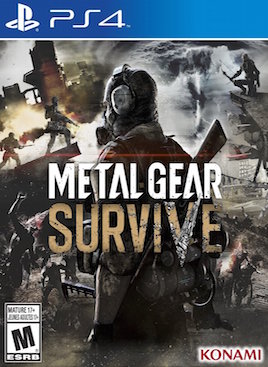 You’d be hard-pressed to find anyone in the gaming community who finds Konami’s dive into the precarious world that is the survival genre to be a promising one. Maybe the idea would hold water had it been a new IP, but unfortunately with the words “Metal Gear” proceeding — as well as the now-infamous split between Konami and long-standing, renowned series architect Hideo Kojima — Metal Gear Survive was always going to have an immovable dark cloud hanging over its very presence no matter the outcome. This despite the still-resolute production levels embedded in its cutscenes (though some may still groan at the Hollywood-imitated, shaky-cam editing, temporal slow-mo and that pointless lens flare The Phantom Pain was chock full of) and even a few referential nods back to previous entries in the series.

But that’s precisely the biggest head-scratcher of this whole affair; Metal Gear Survive isn’t sure whether it wants to play on series nostalgia to coax more players in or go off and be its own thing without all the baggage such a brand brings…and ultimately, it limits the mitigation the game can create. Both as a counter to the warranted backlash of fans, but also the presumption that name notwithstanding, this is yet another run-of-the-mill survival game. Not that the reasons pinning down the game’s troubled build-up and similarly troubled end product are purely down to it being a spin-off. After all, Metal Gear Rising: Revengeance was more than happy with feeding off the series’ recurring silliness and almost self-aware demeanor and yet that turned out alright.

To its credit, Metal Gear Survive does throw up one or two interesting ideas along the way and perhaps the best compliment you could give it is that it’s better than one expects. Granted, its story is bare-bones and fairly non-existent even against the deprived backdrop of its overworld, the baron (and relatively reused, from a MGSV asset standpoint) wastelands of Dite — based within a parallel world to ours with which the player-character is seemingly sent to on mission by a faction hurriedly introduced and skimmed over in the introductory proceedings. As you might expect from your typical survival game, Metal Gear Survive has two fundamental concepts and ultimate objectives. Firstly, expanding one’s base of operations by scavenging for materials with which to craft new weapons/items/food as well as building new facilities on base. And second, most importantly of all, surviving. Which, for anyone having even tried a survival game, can be needlessly testing — even at the best of times — and one that Metal Gear Survive doesn’t so much solve, but seems to take as a bar with which to set its own standard lower still. 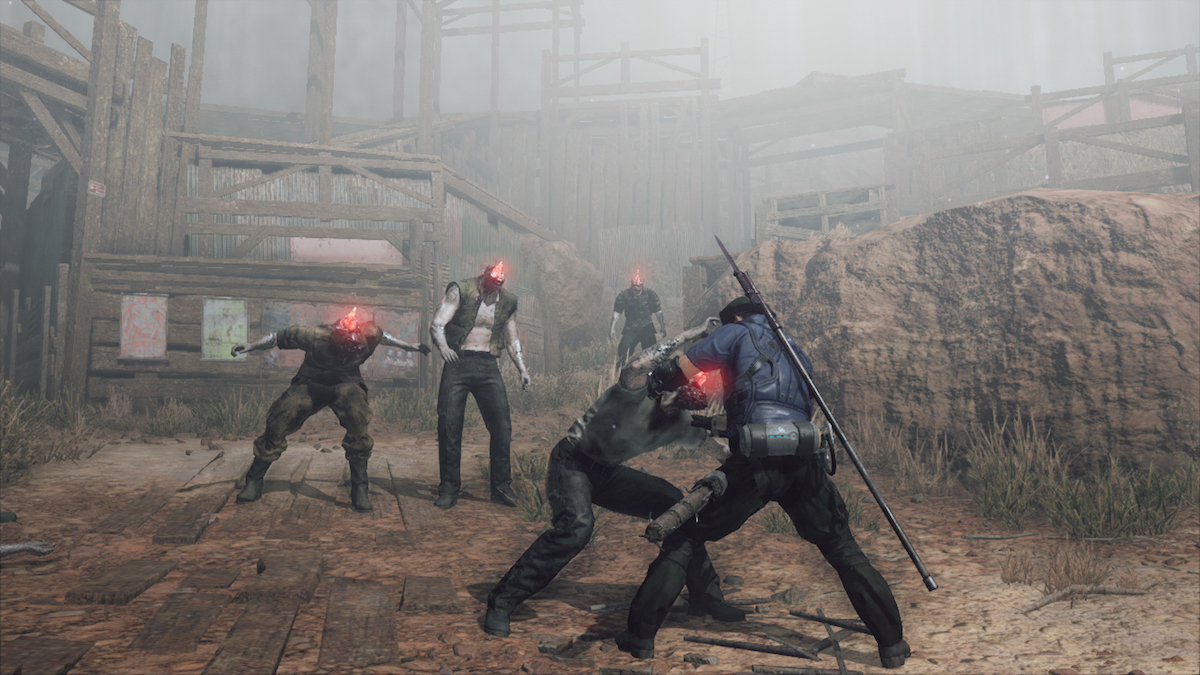 Your player-character — whom is sculpted at the game’s opening — gets hungry and thirsty relatively quickly (the numeric value for both always ticks down regardless of whether you’re at 10% or 100% of either stat) and add to that how scarce edible resources are in the opening chapters and Metal Gear Survive does a terrible job of at least convincing its player to carry on and muscle through the ordeal already laid down upon them. Furthermore, like fellow loot-grinding ventures The Division and Destiny, Metal Gear Survive‘s attempts at quest-lines, be it story-based or entirely optional, are often confined to “go here, get item, come back” with the repetitive nature of such actions appearing far too prominently. Despite the ability to rank up and increase the level of your character — with additional perks and skills supplied upon each level increase — the primary enemies, the zombie-like Wanderers as they’re dubbed, automatically level up regardless of your involvement, making the process seem less a reward and more just some mandatory cog in an otherwise grand and lifeless machine.

Surrounding this, however, are some of the more interesting mechanics that clearly hearken to previous entries. There’s the Survival Viewer from Snake Eater — that alerts you of any physical anomalies and illnesses that need curing such as a stomach bug, fractures, bruising, even lack of sleep — as well as the ring-shaped detector from MGS4 that provides a rough, real-time layout of any nearby foes and how close/aware they are to your presence. And of course, given the mechanics are a clear copy-paste from the previous release, The Phantom Pain‘s movement and basic stealth functions are there to be accounted, albeit with far more limited stealth and restricted to such things as a concealed kill with littler of the emergent gameplay existent. Despite its best efforts to incorporate an illusion of embedded stealth — if not the complete package of previous — it’s clear Metal Gear Survive veers more towards resource-gathering and the decision-making, from the player’s standpoint, with which that will likely entail. 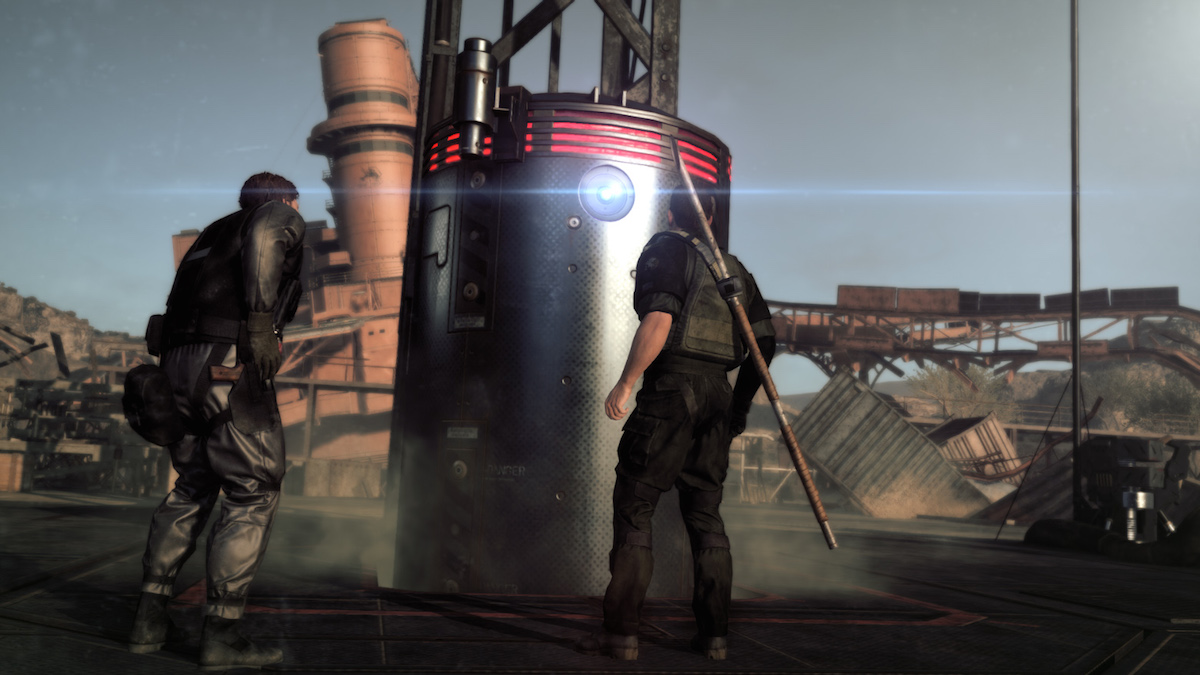 So if grinding for better items/weapons isn’t your thing, the game will quickly wear itself out. Yet despite the repetitive loop of its main objectives, it’s traversing the perilous Dust-covered regions of Dite that dig up some good ideas, albeit ones that are flawed. The Dust aforementioned refers to the visibility-reduced — and majority share — areas of the overworld that have third stat, oxygen, factor into proceedings. Just like with hunger and thirst, oxygen will deplete the more the Dust-covered regions are explored. But even with the lack of an otherwise diverse or narratively-intriguing environment to uncover — with most territory comprised of the same visual aesthetic as Afghanistan from The Phantom Pain (reinforcing the fact Survive may well have been a shoe-string budget affair) but with even less difference in structure or level design — perhaps the game’s biggest plus as a survival iteration is the ways in which it reverts all manner of decision-making back into the player’s own court.

It’s here, auspiciously navigating the less-visible areas of Dite, that Metal Gear Survive (would you believe it) lets its survival concept bear fruit. For one, the map doesn’t simply fill in the missing gaps in real-time, instead requiring backtracking to base camp in order to update and fill it in — and with but mere glowing lights from nearby towers and containers literally the only beacon of direction, exploring these parts becomes a much more tactical game of chicken. Having you looking over your shoulder, considering when it might be time to retreat and head back to camp with the materials you’ve gathered thus far — providing you’ve been keeping tabs along the way and aren’t now lost. You can activate additional fast-travel points in the form of wormhole generators to help you get more easily around the map, but the fact still remains that there’s always that potential risk and peril with the length of time you spend amidst the Dust — using up more valuable oxygen and potentially Kuban Energy (the in-game currency used for most means of expenditure from crafting to upgrading to even, in this case, replenishing oxygen storage) along the way — for the sake of finding the next outpost containing valuable resources or even just a horde of Wanderers that can be farmed for a net profit in Kuban Energy. 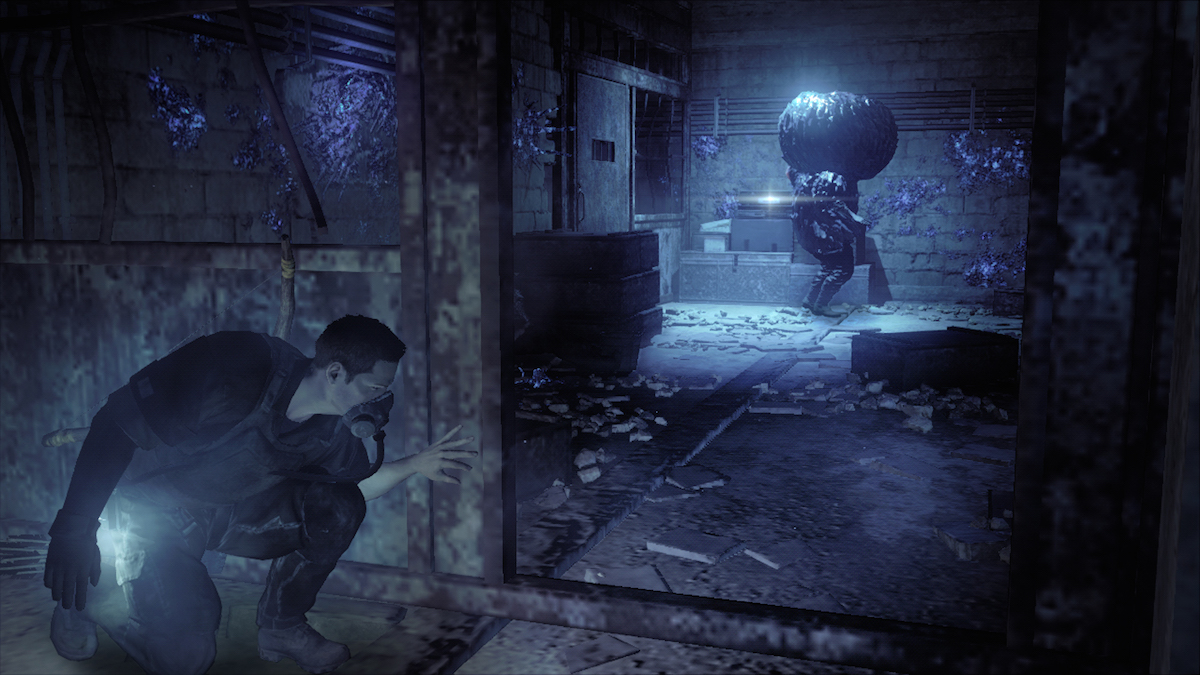 Having said that, the manner of avoiding or engaging with Wanderers does lessen in risk the better your arsenal of weapons get (though upon acquiring/crafting even a decent bow, it becomes ridiculously easy to mow down one foe after the next). And as noted, though the actual navigating is anxious when it needs to be, it doesn’t excuse the fact that the end goal — if not the next triggering of a story cutscene — will often always be low-level loot. So it’s here then where the elephant in the room is finally addressed, and sadly, the issue of microtransactions finally reveals itself as one that, once again, is far too invasive for its own good.

Not only are there instances where particular options and abilities are locked behind a paywall — such as the now-public instance of having to pay for additional character slots, but extends further into such things as additional weapon pouches and secondary item slots — it’s clear that Metal Gear Survive‘s grind-like progression is an intentional decision made to make its booster packs come across initially as a more worthwhile investment. Said boosters providing an increased yield to such things as the amount of Kuben Energy one can collect, or even your harvesting of food at base camp. But given the level-up requirement increases dramatically around the Level 15 mark, it’s here where the monetary systems quickly loses any neutrality and become outright predatory. Add to that the fact Metal Gear Survive is but one more game in a long-list of AAA outings that doesn’t allow for the conversion of in-game currency to SV Points (the currency purchased with real-world money for such features) and it’s clear Konami themselves are more than happy to tread the dangerous waters of potentially pay-to-win models, despite the game being a relatively PvE system even in its online co-op mode.

The co-op mode is a satisfying alternative to the single-player outing and while it does encourage teamwork in order to fulfill what it dubs Salvage Missions — which basically comes down to fighting off three waves of enemies whilst protecting a primary digger at its center — it’s fairly easy to play lone wolf and merely go for the most resources gathered of the four-player team you’re a part of. One slight gripe is the fact that enemies are often vastly over-leveled should you jump into co-op without much time investment in single-player. 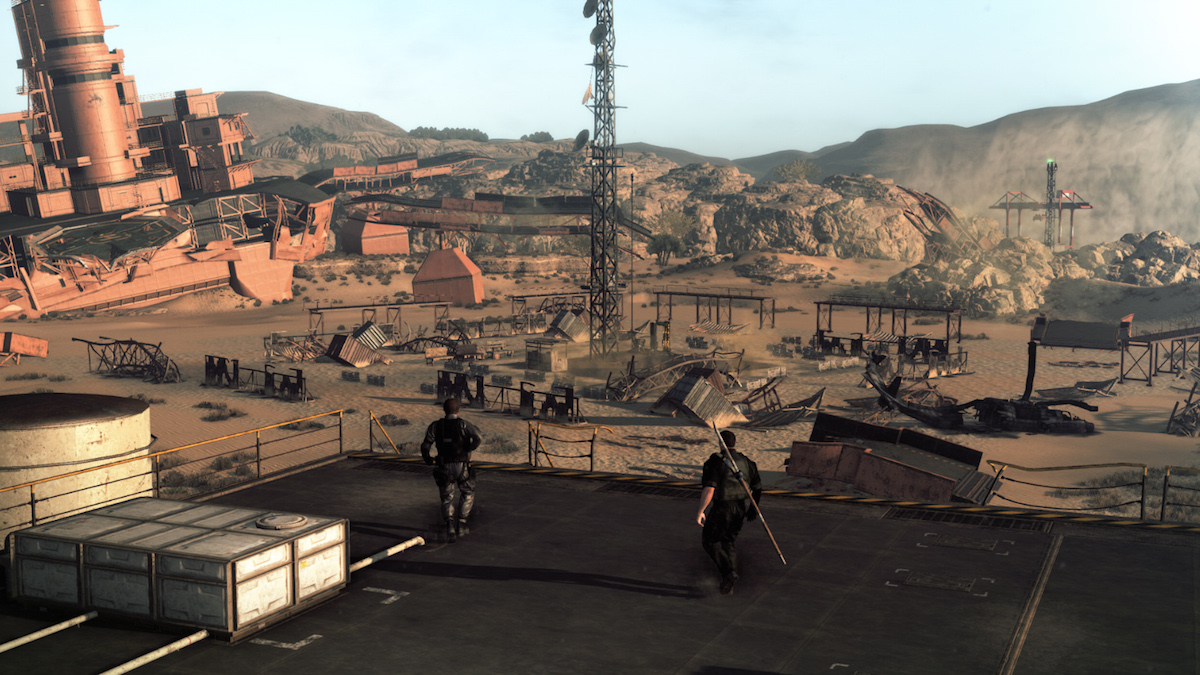 For those willing to bear the brunt of its inexcusably poor opening and subsequent first few hours — and can even find it in themselves to excuse the nagging stats requiring a near-constant influx of food and water — Metal Gear Survive does deliver a few good ideas along the way buried beneath its mediocre world and often grind-focused, loot-based item-gathering. There’s a perilous yet warranted intrigue to exploration and it’s this more specific tackling of the survival trope that the game does at least garner some pluses. Sadly, its invasive microtransaction structure and otherwise lack of engagement as a Metal Gear/stealth entrant is what will likely stand as its greatest downfall — inevitably cancelling out all the goodwill the game creates in its shorter spells. Metal Gear Survive as a whole isn’t the utter abomination many had suspected it would be, but it doesn’t push itself beyond the still-waning status of being tepidly average.