Far Cry games are known for putting players in perilous situations in exotic locations, so it came as a bit of a surprise last year when it was revealed Far Cry 5 would take place in Montana, which is probably the least exotic location imaginable, at least to an ethnocentric North American. After having now spent a significant amount of time visiting Hope County, however, it can be said with confidence that this fictional part of Montana is teaming with the appropriate amount of hostile locals and overly-aggressive wildlife to match the previous Far Cry map, whether it was during a modern day war zone or a time when prehistoric beasts roamed the earth. Additionally, the newest Far Cry brand of Bond villain Joseph Seed is the perfect charismatic evil blend of Hank Scorpio and Ned Flanders.

At its core, Far Cry 5 sticks to the formula that has made Far Cry a successful series. The player is given a vast open world to explore with a main story campaign revolving around a supervillain they are free to ignore in favor of completing sidequests and liberating outposts. These tasks are often interrupted by random attacks from either hostile humans or random animal attacks, but those are all part of the Far Cry experience. Fans of the previous installments will feel right at home in Far Cry 5, but the issue when we start to get into sequels beyond the third entry is that the the developers have to walk a tightrope of familiarity and innovation. Changing things too much will drive away long time fans and not changing enough will make it feel like a rehash. Far Cry 5 seems like it may have come close to that sweet spot, but that won’t be known until the final version is out. 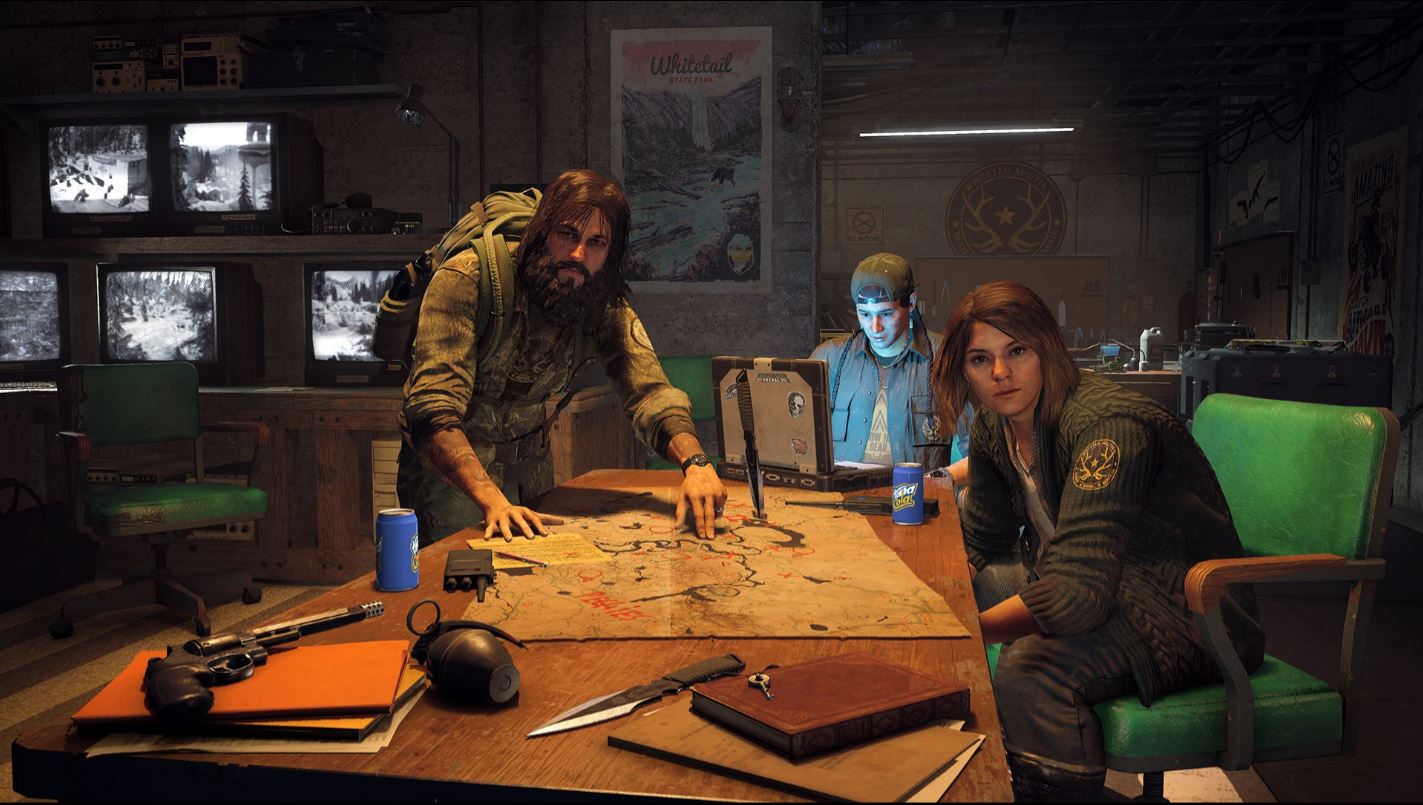 A feature that has been discussed, though obviously not tested, is the role that choice has in shaping the narrative of Far Cry 5. The choices a player makes during Far Cry 5 will have a greater impact on the story progression than what was seen in previous games, though multiple playthroughs would be required in order to experience the degree that this is true. In previous titles the player would speak to an NPC and be given a mission or objective to complete. One of the goals for Far Cry 5 was to create a world that felt more alive where some of these events unfolded in a more organic manner, so the player could talk to some people and just be given tidbits of information that they could choose to look into if they want, and a larger picture will develop by acting on the statements by a few characters.

Hope County feels like an actual living community. While the people outside of Eden’s Gate have an universally unfavorable view of the cult, their reactions to the player and what specifically they hate about Eden’s Gate vary from community to community. After liberating one of the outposts from the oppressive grip of Eden’s Gate, the gratitude that met my character was with the sentiment that they should have left me to die. Other people in this community seemed pleased that I was alive mainly because it meant they had a new expendable soldier they can send against Eden’s Gate and not have to worry about sacrificing any of their own people. Not exactly a warm hero’s welcome, but this did help develop a sense of believability to the people in Hope County where their spirits are so broken that someone coming to try to save them from this organization doesn’t give even the slightest increase in hope.

Multiplayer isn’t exactly new to Far Cry, but Far Cry 5 is the first entry that allows for co-op from start to finish. Co-op play has the obvious advantages such as developing a flanking strategy to do a stealth take over of a stronghold, that is until one of the NPC companions fires an assault rifle and blows your cover. Other instances in co-op involved a group of cultists watching me cruise around the lake in a jet ski while my co-op partner was able to sneak up on them and take them out. There is a certain element of trust required in co-op as the player is putting their virtual life in the other player’s hands when they get in a car or plane, and attacks by vicious skunks are so much more entertaining when they happen to the other player. Far Cry 5 seems like a great single player title, but after spending some time in co-op, it seems that could be the more fun route.

The combat in Far Cry 5 is old hat to people familiar with the series with its blend of aggressive action and stealth-based sneak kills. Sneaking up to execute a takedown or using a compound bow for a silent range kill is a good approach to taking out strongholds or at least reducing the number of enemies prior to someone figuring out you’re there and actual fighting unfolds. Gun play handles well in open combat, but the most fun weapon used during the preview was the flamethrower. There is something satisfying about setting multiple people on fire at once and this joy is increased when the recipients of the flames happen to be in a moving truck. Reckless use of the flamethrower can result in accidental player death, but my character could be heard uttering “worth it” in his dying breath, especially since one of the Guns For Hire I was using had a special skill of full health revival. Solid combat controls are essential for Far Cry 5 since players will frequently be engaged in battle like other Far Cry titles. Eden’s Gate members are constantly traveling Hope County and it’s difficult to travel far on any road without running into some confrontation. On top of the armed cultists, Ubisoft wildlife is notorious for being aggressive, so expect any nearby animal to awaken from the deepest hibernation to travel any distance in order to kill you.

Hope County is a nice looking community. The densely-wooded landscape and mountainous regions make for nice sightseeing and there’s potential for some truly spectacular views when players are able to commandeer an aircraft, even if the large statue of the Father on some distant mountain top is a tad unsettling. The overall quality of the graphics across the environment, animals and characters make this visually-impressive.

While too early to pass final judgment on Far Cry 5, there’s a lot of potential for it to be a great game. The basic gameplay feels like what we’ve come to expect from a Far Cry title, but there are hints that this could be an evolution of the series and not simply retreading on familiar ground. While it did spark some minor controversy during the initial announcement, the plot and main villain are some of the more compelling features of Far Cry 5. Eden’s Gate and the Seed family are completely fictitious, but it’s apparent that the writers did their cult homework. Joseph Seed is an effective villain in that beneath his exterior persona of a religious and community leader lies an evil and dangerous man. The story based around this cult is what initially made Far Cry 5 catch my interest, but playing it and observing how everything came together is what caused me to look forward to its release.

For more on Far Cry 5, be sure to read our interview with Producer Darryl Long.