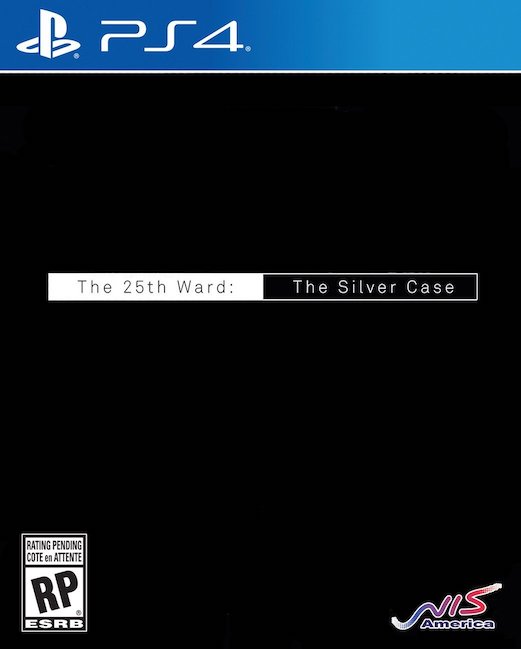 The 25th Ward: The Silver Case

Playism and Grasshopper Manufacturer released the long talked about, never localized The Silver Case to western audiences in 2016. A project of love for both the 1999 classic and fans of Suda 51, the provocative creator behind the title, it was a tale in the mad world of the Kanto wards amidst the terror of an unchecked and unexplained series of murders. It was weird, creepy and more than a little off-kilter, evoking an unease through still art and text that so many other horror titles can only envy. It managed to feel fresh despite the fact that it was a remaster of a fifteen year old title, with some graphical issues that age can impart. Because it was such a niche title, there was doubt that the mobile only sequel, The 25th Ward, would follow suit. Fortunately, publisher NIS America has taken up the call, bringing it to western audiences. It’s a great thing they did as The 25th Ward manages to be even more engrossing than its predecessor, a feat that shouldn’t be possible.

Set a few years after the events of The Silver Case, the events of The 25th Ward are broken up across three, for lack of a better word, campaigns. Set in the titular ward, an experiment in a society that supposedly has done away with the bureaucratic nature of government in favor of a more loose community based system, the three campaigns follow members of the Heinous Crimes Unit, Regional Adjustment Bureau, as well as Tokio, the protagonist from the first game. Through the three campaigns, players begin to uncover an underlying conspiracy all tied to one name: Kamui…

This explanation of the setting may seem rather dry. The reason for this is that one hesitates how to tackle the rampant insanity found in this visual novel/adventure game. The 25th Ward is Goichi Suda at peak Sudaness. For the uninitiated, this means that the writing and story are crazier than a hair swallowing fetish. For once, this isn’t some random “wacky” example made up by this writer to illustrate a point. A hair-swallowing fetish is an actual plot point that gets covered relatively early on. It is also dismissed as a “common perversion,” so, you know, dating Suda must be one heck of an adventure. The Postal Service now employs government sanctioned hit men to “adjust” people who complain about the most minor of irritants. The hot new method of suicide causes blood to boil and erupt from the face. People spout nonsense like “What am I supposed to do if I die?” as though they are pondering what steps they should take if they lose a job. The entire thing is unbelievably bizarre, but it also makes a strange sort of sense once one gets acclimated to the dystopian setting and the roles people in this society take. 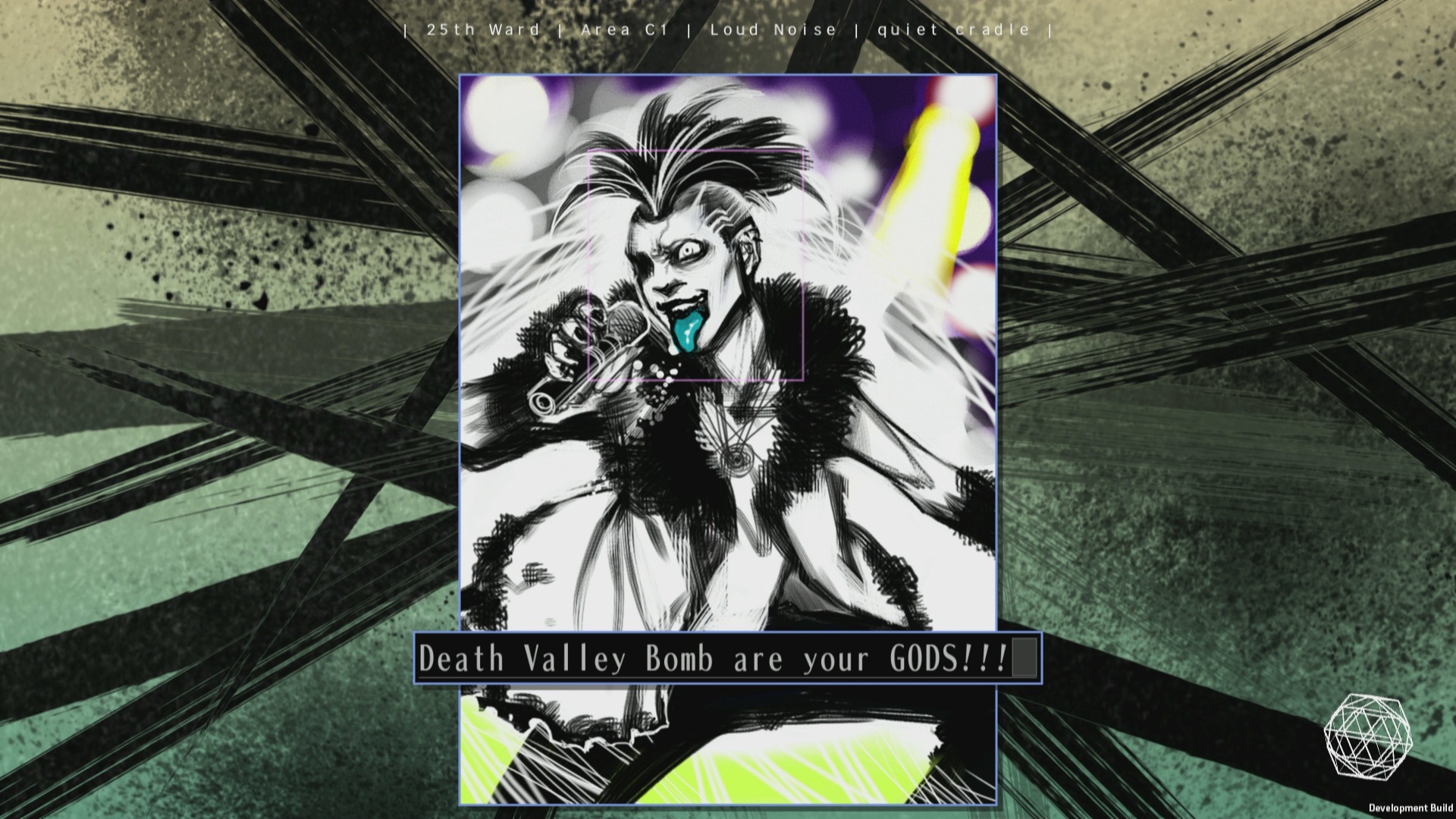 That acclimation is a bit more difficult than it needs to be. The whats and whys of the of the world are strange even for veterans of The Silver Case. Frankly, the best advice to be given is to take two minutes to read over the “Story” and “Character” sections of NISA’s official site. It sets up the world succinctly, which is something that should have been included in the game itself. It’s possible to pick it up while going along, but it’s more enjoyable to not read the text while in a state of befuddled confusion. Fortunately, the same is not true for people who skipped this title’s predecessor. When knowledge of these events becomes needed, the game gives a clear recap, especially during the prologue section of Tokio’s campaign.

One thing that The 25th Ward does incredibly well is the interlocking story. Each chapter covers a different point of view surrounding major incidents. Each character fits in to the overarching tale in interesting ways. This writing conceit can often be used as a crutch to reuse chunks of story. That’s not the case here. The story beats are unique and what does get revisited is fresh (except for one annoying part when trying to reach an appraiser in two of the campaigns). Instead, these different perspectives gives the story an interesting life as pieces fall into place. While there is no “right” way to play it, it’s recommended that the player experiences the chapters with each other. Meaning, play Chapter One of all three, then Two and so on. The twists simply pop out better this way and gives the events deeper meaning. 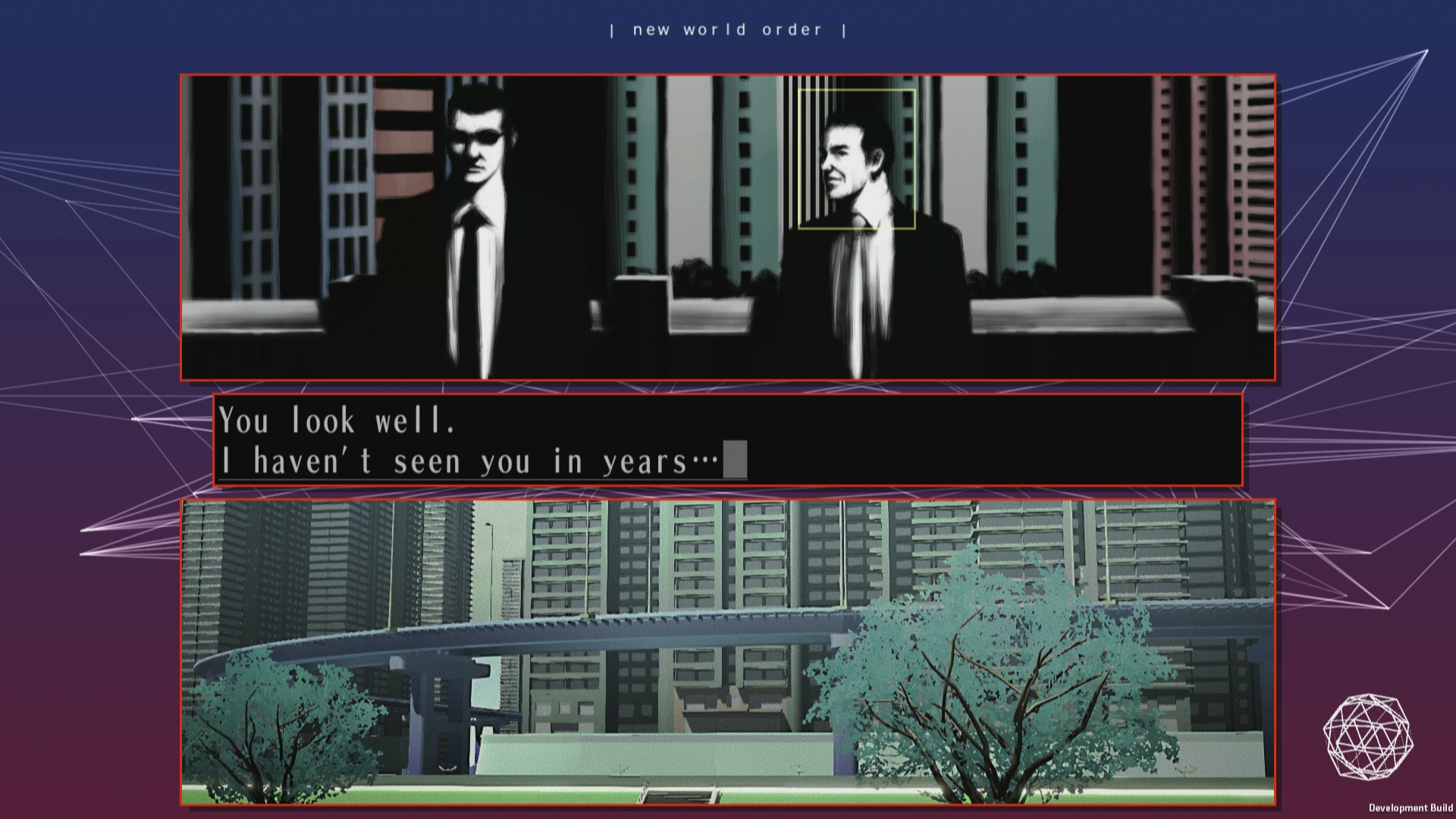 A major improvement over the prequel are the controls. One of the things that stuck out like a sore spot was the cumbersome input methods needed to move around the environment and interact. It stood out for actually apologizing to the player as it was explaining them. The mobile roots of this one actually plays to the game’s favor here. Controls are simplified so that the focus can be on gathering information and solving puzzles. Movement is chosen from contextual directions and various side die are used for inputting passwords and commands. It works well on the PlayStation 4 and keeps the interface clean, allowing the unique art style more breathing room to shine.

The same cannot be said about some of the puzzles. Often times, the way forward is to simply exercise all options until the game is satisfied. Why the player is required to choose the “Look” command a few times over until the game is ready to proceed is a topic best left to the philosophers. This stunts the flow of the conversations taking place and clicking an option until the text starts repeating gets old. There are also puzzles that have to be brute forced. One particularly annoying series involved keeping various chatbots engaged via selecting the correct responses in a multiple choice menu. Players are advised to “read the flow”, but save for an occasional pattern that can be found in a group chat, the “flow” did not make the transition to English. Also, those fights against the hit men can seriously go adjust themselves. 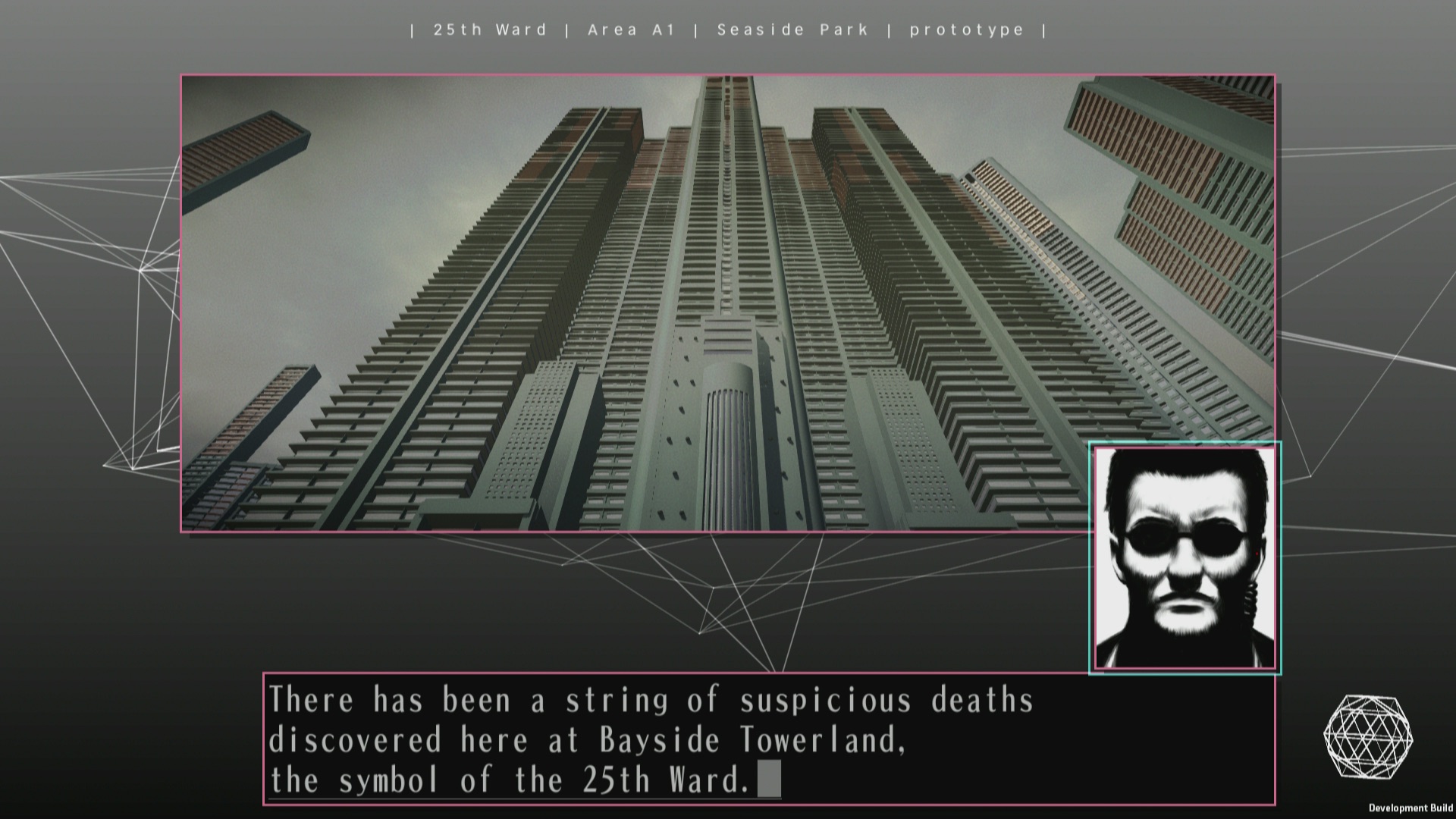 Speaking of the transition, the build that was played for review featured some typos. “The police can’t haven’t been able to intervene” just hurts to type let alone read and an end of chapter screen captioned “Heroes and Villans” should probably have been caught already. This is still a pre-release build, however, so it’s entirely possible that these issues will be fixed in time. One returning problem from The Silver Case is the sound the text makes as it’s being printed on the screen. It was terrible in the first game and it would have been great if it was changed for the sequel. Imagine an audio recording of Gilbert Gottfried being beaten to death with a typewriter dubbed onto cassette tape repeatedly and the results would be close to this. Protip: Lower the sound setting to 25%. It removes the edge of the printing sound while keeping other story specific sound effects audible. Well, at least on my TV. It might require some experimentation.

The music more than makes up for this, though. Spanning genres such as jazz, Japanese Punk, ambient noise, trance and more, the music evokes the mood of each piece of the story, lending the experience an extra texture. While none of these genres are among my chosen styles, what is offered here builds upon the world. Heard on its own, one might argue that it’s not a good soundtrack, but in the context of the experience, it remains…well, not a “good” soundtrack. Instead, it’s a perfect soundtrack that makes the experience so much richer. 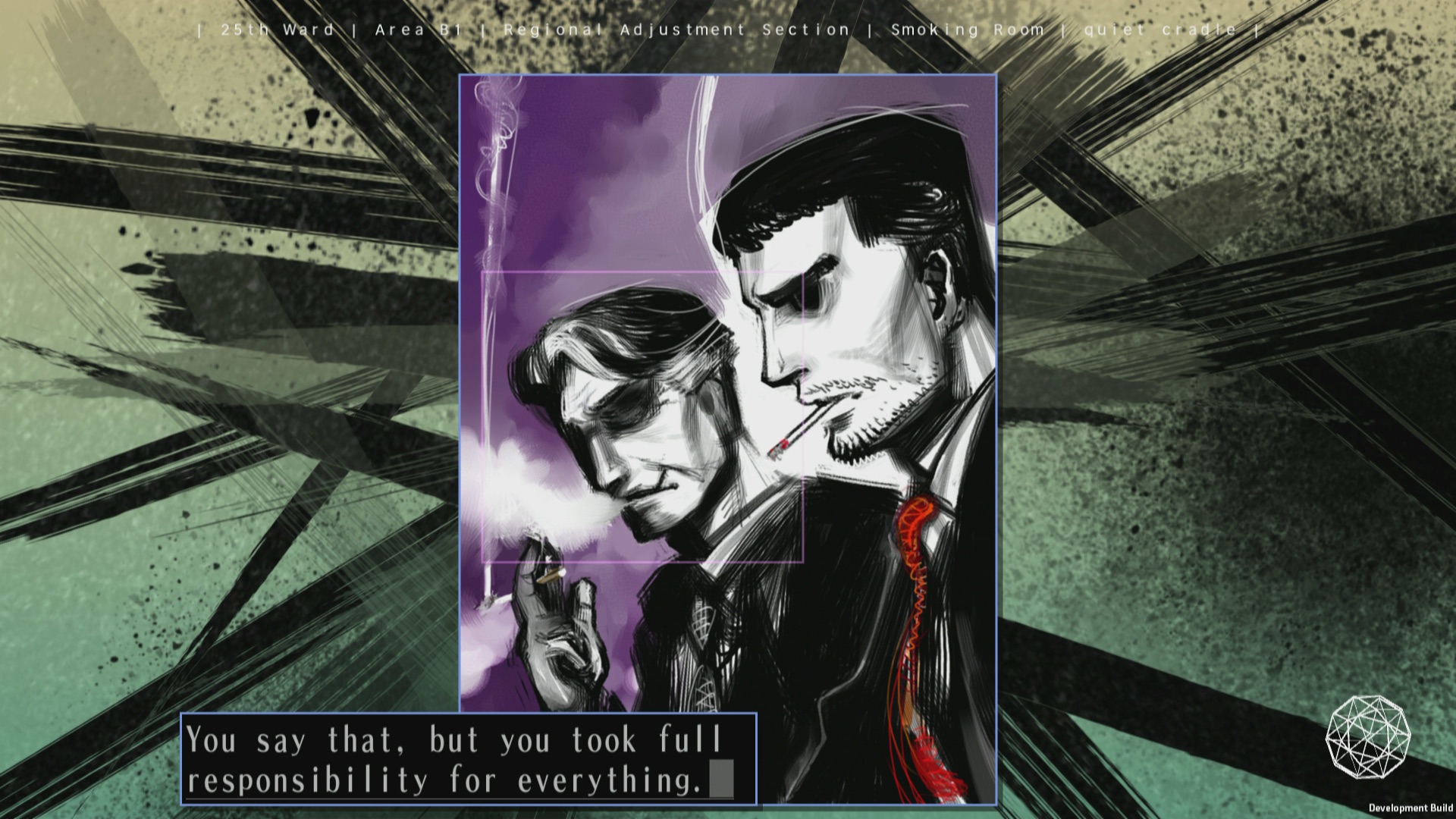 The Silver Case was a seminal example of an incredibly influential game creator’s early days while he is finding his creative footing. It still remains a flawed, but genius, masterwork. The 25th Ward: The Silver Case manages to fix some of those flaws, keep others and introduce whole new ones. In the end, The 25th Ward takes the edge as it is a less clumsy, more playable experience even if it could be argued that the quality level is a wash. This is a fantastic experience for people who enjoy Suda51, visual novels or finding out of context quotes to annoy friends.