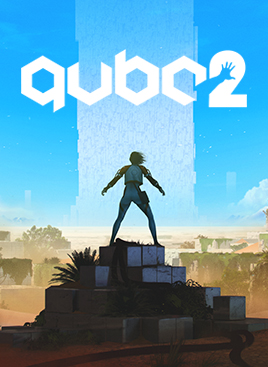 There’s a point around half-way through Q.U.B.E. 2 where the player-character, Amelia, seems to unrequitedly come to the conclusion that “nothing seems to make sense” after a sudden turn of events. While it may well be natural to have a similar level of distilled shock and lacking grasp on the reality of the situation, it conjured an unintended laugh from yours truly at the moment of such a declaration. And not the good and/or flattering kind. To its defense, you can see Toxic Games’ intention (as much their source material) when it comes to injecting a sense of narrative as one makes their way to the end — hundreds upon hundreds of cubes later.

But when the extent to storytelling can in the end be confined to unseen characters merely talking disconnectedly to each other through voice-comms, it doesn’t take long for some form of elaboration to turn from a pure desire to an outright demand. Because while the puzzles churn out, at their best, head-scratching, expletive-inducing incidents that still manages to conjure that “eureka” moment, outside of this, there’s little that Q.U.B.E. 2 presents that feels anything more than hollow or just superficial in considered detail.

So what’s wrong with 3D puzzlers aiming to be more than the sum of their gameplay/mechanical parts, you might ask? In the case of recent outings like The Turing Test, they can indeed make this work — even going as far as to build up their story into an interesting dilemma for the player come the final act. And those games were more than happy to ride the retro-futurist wave for long spans of said journey. While it may be unfortunate that Q.U.B.E. 2 in no way manages to ensnare its players to anywhere near the same degree of moral decision-making, that’s not to say the path you’re led down over the course of the ten-or-so hour run-time is down to its choice of aesthetic. The fact environments are built solely around everyone’s favorite six-sided hexahedron, in of itself, isn’t the problem. The problem is that the game does little, if anything, with this intended artistic upgrade outside of vague suggestions through its dialogue or indeed its world-building. 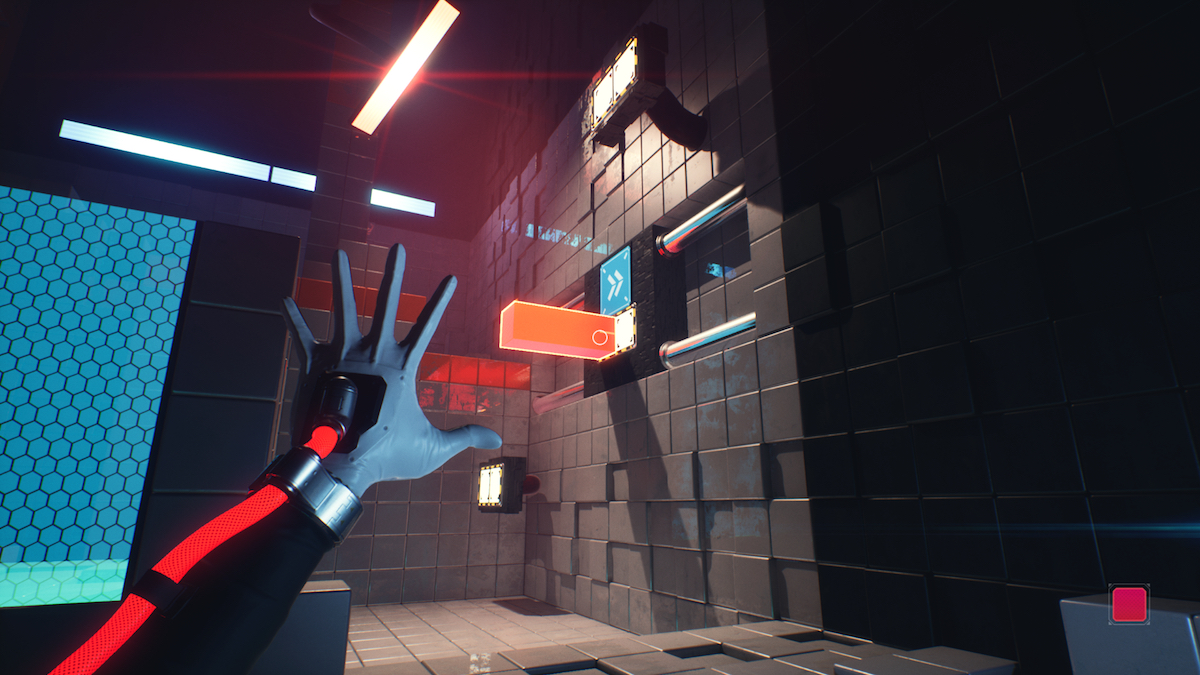 The fact the game even whisks you, forcefully and without any real natural reason, to a completely new locale — still modeled on cubes — at the very start offers reasonable evidence that Q.U.B.E. 2 wants to be treated as more than a linear series of self-contained puzzles that must be solved one after another, but isn’t willing to put in the additional hard-work to warrant that reaction. Outside of the environmental changes, the world feels more and more like a stage-set — there to facilitate and fill in the space surrounding the puzzles but so evidently devoid of substance or reason for being. The only sense of presence being the mandatory ninety-degree corridors to walk down or the occasional generator rooms which then split into accompanying rooms to investigate in good ol’ Resident Evil fashion.

If there’s one saving grace to the whole experience, then it is so obviously lies in its puzzles and how elaborate the game can get given how minimal the early mechanics are. The basic set-up is that players have access to three color-coded abilities. Blue, which can create bounce-pads of sort; red, allowing blocks to manifest and expand from out the default white panels…and green, which can create cubes themselves to use on such things like switches and doors. The method in most puzzles lies in working out where to spawn particular colors and when, all the while taking into consideration how cubes react to such things like basic physics, momentum and in latter cases, status-changing devices like oil-spurting hoses and whirring fans. Later, when other elements like magnetic panels and even spherical balls come into play, Q.U.B.E. 2 can temporarily delight in its clever use of physics — creating somewhat brief Rube Goldberg-style instances wherein the trick is lining up figurative rows of objects and getting one’s timing correctly. 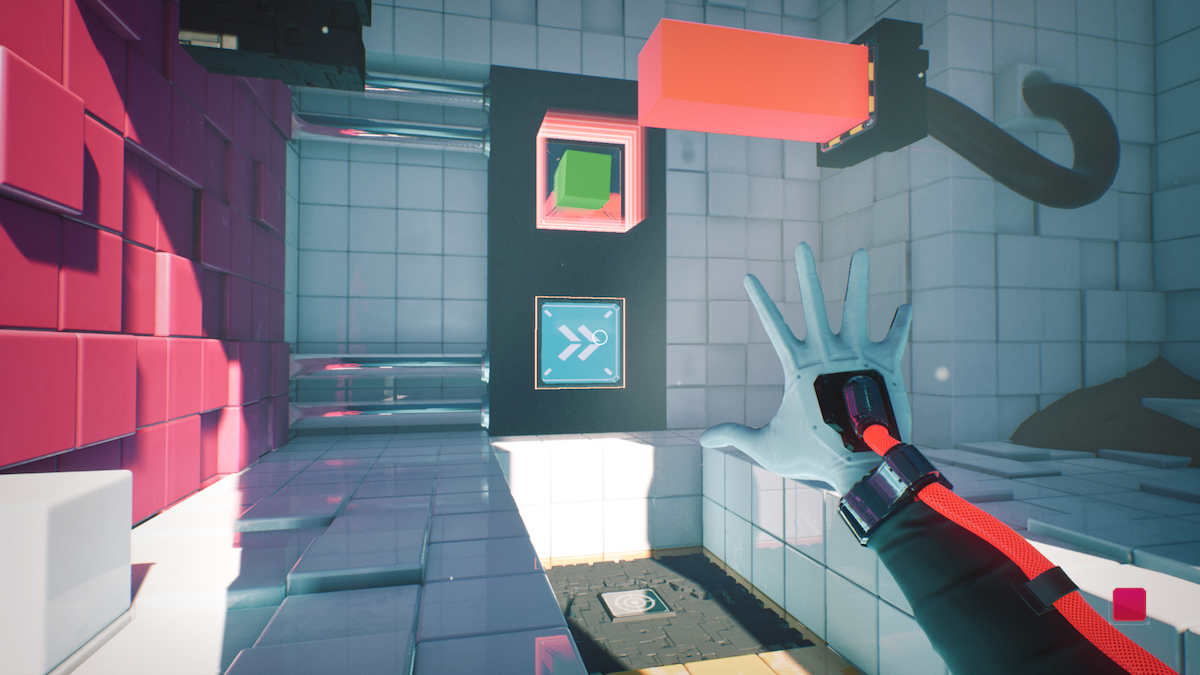 Ignoring the basic level design and environments themselves, there’s a decent and aptly-made difficulty curve that builds reasonably up over the course of the game. Growing more complex and imperatively reliant on quick-timing and reflexes, but all the while still built around the simple foundation of its gameplay. More often than not there’s usually only one hidden path/solution to each puzzle, but there’s undoubtedly an additional charm in seeing how these individual elements play off one another upon figuring out the best (or only) solution. Outside of one fundamental upgrade later on, Q.U.B.E. 2 doesn’t add or expand to the player’s arsenal in terms of new cube/color-types, but nonetheless, the developers still manage to offer a pleasing variety of conundrums that, at least, makes its small offering feel less restrictive than how it may initially appear.

It’s just a shame that these brief moments of engaging gameplay don’t add up to anything substantial outside of short-term focus. It comes to the point where players may look to instances where the screen seemingly glitches out if for a brief second and believe this to be some subtle (or not-so-subtle as it might turn out) red herring or alluding to a dramatic plot twist later on. But alas, it’s actually the frequent loading-in of assets upon walking through a door or even turning a corner. Added to, in terms of minor irks, by the bizarre over-use of lens flares in particular rooms that serve no real purpose outside of the most meager of decoration. 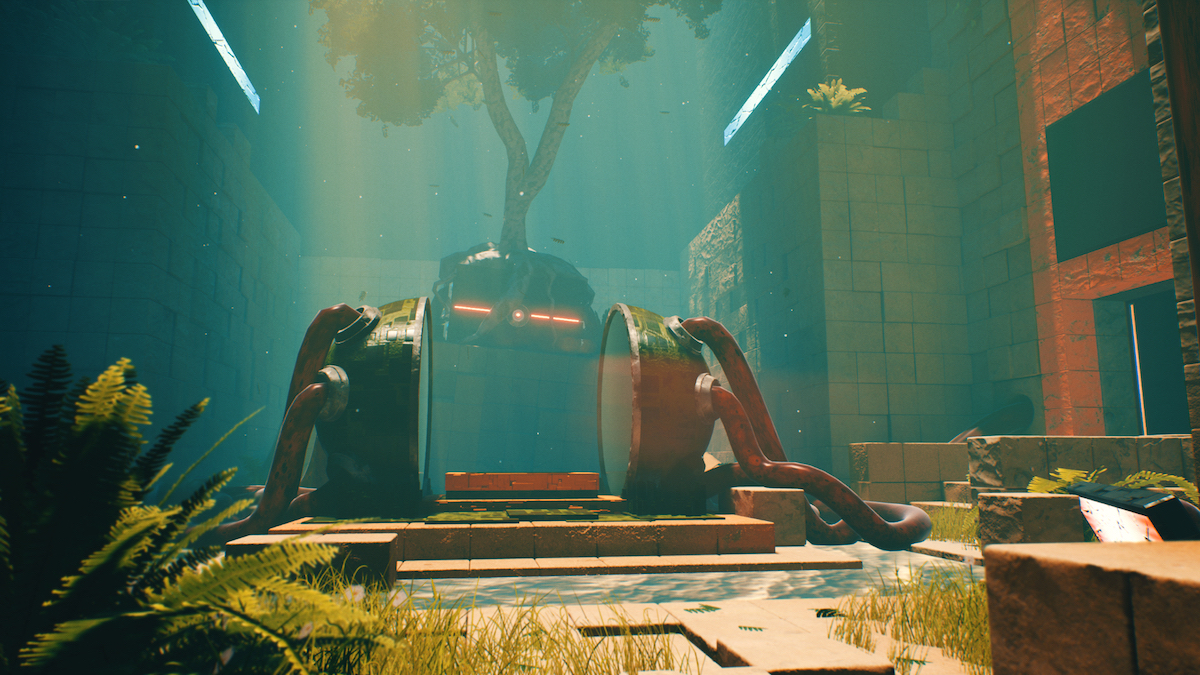 The sequel builds upon the foundation of the 2014 original in both gameplay and small additions in its artistic strides, but in the end, Q.U.B.E. 2 does little (if anything) with its visuals to warrant this a wholly-expanded sequel, pleasing as its puzzles may be. Even with engaging mechanics, the biggest complaint coming out of this ten-or-so hour game is its abhorrent lack of purpose in its world-building — the aesthetic being little more than some quick lick of paint and nothing more. Despite its [not-so-best] effort to give meaning to its premise, Q.U.B.E. 2 — while at least satisfying with its gameplay — feels like one great stage prop there purely to deter you from the obvious and empty space left over. And in the end, narratively or otherwise, it doesn’t quite pull it off.