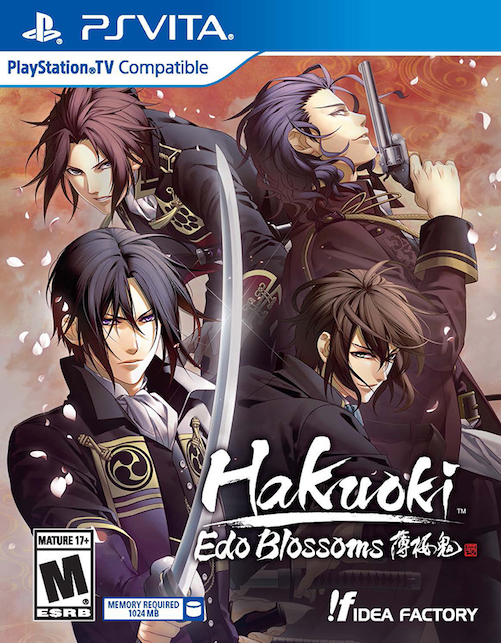 The Hakuoki series has been quite the prolific one. Starting out as an otome visual novel that spread across multiple platforms, the series quickly found its way to anime, manga and movies with all sorts of prequels, retellings and numerous other ways to experience the tale of the secret samurai squad that is the Shinsengumi. With the mass appeal that the series has seen, it makes sense for Idea Factory to revisit the tale again in an expanded format. The publisher made the controversial decision to split the tale in two for the recent Vita releases. The prior one, Hakuoki: Kyoto Winds, was well received but many complained about being left hanging for the second half. That second half has now finally arrived with the release of Hakuoki: Edo Blossoms and it was worth the wait.

The story picks up right where Kyoto Winds left off (minor spoilers ahead for those who haven’t seen the end of the prior game). The Shinsengumi suffered a catastrophic loss at the hands of the Imperial Army and were driven from their home in Kyoto. Fleeing to Edo, the hometown of protagonist Chizuro, the group struggles to regroup and rebuild their strength in order to fight back against the evil demons (as they tend to be called in the Western translation of this game). Meanwhile, each member is dealing with the ramifications of certain decisions made prior to their defeat, as well as the emotional and/or medical side effects they might have.

Look, it’s easy to understand why certain elements of the gaming populace might have given this series a pass. This was actually the introduction for me as these titles tend to be marketed as straight otome. “Check out all these dudes that can be wooed! Aren’t they pretty?” Appearing to be a dating sim geared to those who like men, it didn’t seem to be something that would hold much interest for me. Previous experience with dating sims designed to entice those that like the ladies, where players tend to try to go spelunking in as many caves as possible, leads one to believe that Hakuoki will task players with guiding Chizuro on a quest of romancing the bone (yikes trying to keep descriptions clean makes the results come off as even more creepy). 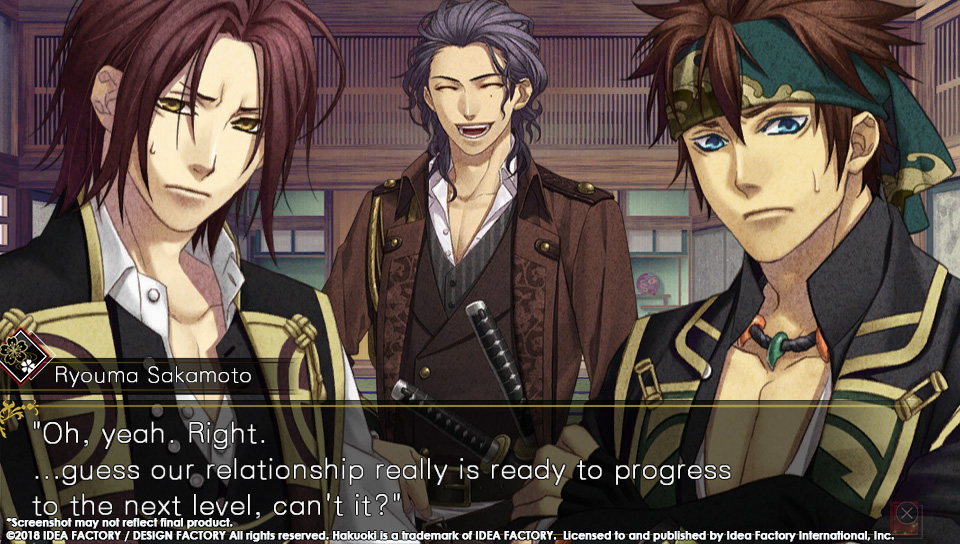 That isn’t the case with Hakuoki. This is more the politics of a fantasy version of 1860’s Japan, with a heaping dose of monster fiction and good old fashion anime nonsense thrown in. The fact is that, like Collar X Malice before it (my only previous experience with the genre), the story has little to do with training Chizuro to vault as many poles as possible and is more dedicated to telling a good danged yarn. For the fantasy novel nerd, the best parallel that can be drawn is Jennifer Roberson’s Sword Dancer series. It tells of a burgeoning and then troubled romance, and it could be said that is the primary focus, but the tale is one of such well-written action and intrigue that even the hearts and flowers adverse will find themselves invested in the adventures of Tiger and Del. Also, the dudes are really, really sexy.

Coming into this title without any previous experience, it should be noted that I was not lost any any point in the game. Divided up into a selectable story arc for each of the major males, the game gives a great, clear and concise recap of the relevant details from the previous title, with additional events and terminology highlighted during conversations for an easy glossary look up. Becoming well versed on prior events with ease managed to make revelations carry the same emotional heft. The previously unmentioned drawback of being a Fury (Read: “Mostly Vampire”) still carried impact. The emotional drama of another protagonist dealing with failure was completely relatable.  Idea Factory and Otomate knew that the uninitiated would show up here and made great strides to make them feel welcome without dumbing it down for returning fans. 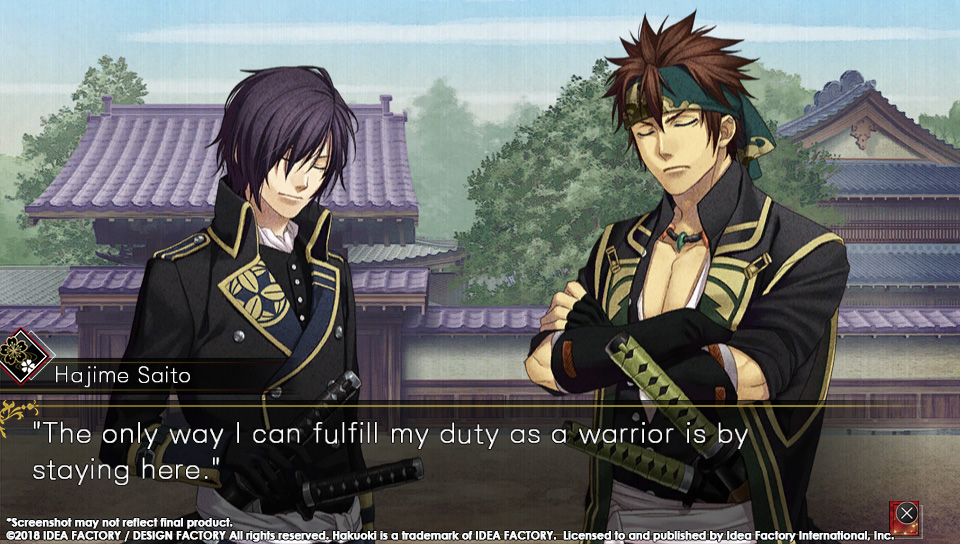 That’s important because story is all there is to do here. Unlike other popular games that bill themselves as visual novels but beef up the gameplay with other elements, such as Danganronpa‘s logic puzzle based trials, there is little interaction found in Hakuoki: Edo Blossoms. The time spent with this title is basically reading the story and making a few decisions here and there, such as choosing whether to give Hijikata some blood, some medicine or just watch him writhe around. Since the point is to use these decisions to reach one of thirty different endings, spread across the twelve warriors available to select at the start, the experience could have been a slog. Fortunately, the tale being told is compulsively readable.

The tale is bolstered with some well-drawn art. Each of the pretty boys are detailed and set against some authentic feeling backgrounds. The colors and style pops on PS Vita’s screen and one can tell that real effort was put in to keep the art attractive. It’s a bit of a double edged sword, though. In keeping the art attractive and the tough samurai dudes androgynous, it can be difficult to tell some of them apart by look. This can be a complaint with many games of this ilk, but it feels amplified here with changing hairstyles and outfits making keeping the characters straight difficult for the newcomer. Even a long time series fan has admitted to me that it can take some time to get it all down. 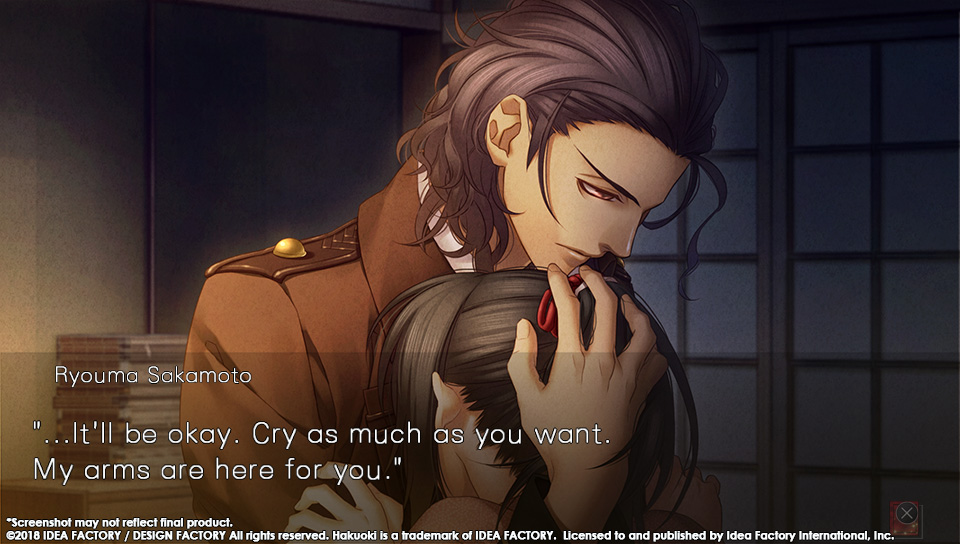 Hakuoki: Edo Blossoms is not what it markets itself as. Instead of a frilly samurai epic, it’s a monster fantasy that steeps itself in Japanese lore and historical politics. It sidesteps its marketing to be a title that anyone looking for a good story can enjoy. The ladies love it, which is always fantastic. Otaku dude-bros with a sword fetish as well as manga nerds, however, will also have a fantastic time with this one. One does wish that there were more interactive elements, but this is a great read for those who simply want that and one with tons of value considering the fact that there are twelve interlocking and lengthy story paths to see through.