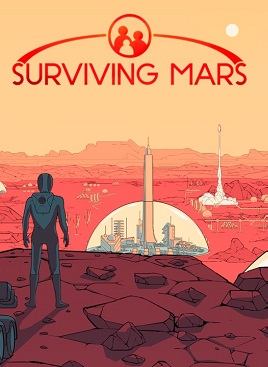 Home is where the heart is, even when that home is a different spinning ball of rock in our known universe. Welcome to Mars traveler, we hope you find your new home and living experience to be out of this world. All the bad space puns aside, Surviving Mars proves that sometimes you don’t need war to make a grand design, but putting people in extreme situations can bring out the best and worst in us.

Survival is in our blood; it’s something that has taken humanity towards where we sit today and where we’re still going. Survival is a part of our everyday; eating, drinking water, breathing air, people must do these things while also making certain life choices for themselves. It all boils down to living in hopes to see what tomorrow will hold. Drive combined with curiosity can lead to ingenuity, bringing out the best in what we have to offer to ourselves. That same ingenuity can at times become a forced hand and in those moments we find we can shine even more or completely watch it all fall apart due to our own hubris or self-destruction. Surviving Mars proves to be the best of both worlds (sorry).

Surviving Mars at its base is a city builder and anyone who has played a Sim City or Roller Coaster Tycoon should immediately feel right at home. It’s something else, though, and the name is right in the title. That’s right, Surviving Mars is a survival game, making it even more worth the experience of such a genre combination. It’s a combination that players will feel comfortable getting to know, even with a bit of a steep learning curve. Having two games in one means understanding where to put priorities, which is where the curve begins to show itself and where Surviving Mars struggles to welcome its newcomers to such an exceptional home. If one can get past these initial humps, then Surviving Mars will show itself to be a fantastic time in an alien environment that can hang with the best city builders. Before even landing on our neighboring red planet, it’s important to get off the one we’re currently on, Earth. Where other sims’ or builders’ beginning choices revolve around picking certain civilizations, species and traits, Surviving Mars begins with picking a Corporate Sponsor (think of it like a civilization). Sponsors range from an International Mars Mission to countries racing each other to the new red home, each Sponsor coming with their own unique traits. If Surviving Mars does one thing well it’s attention to detail and this becomes immediately apparent with the opening choices. For newcomers, it would be wise to go with the given picks, building from there. Each Sponsor will come with a set amount of funding, resources, etc. which will be allocated throughout the building of this new home. 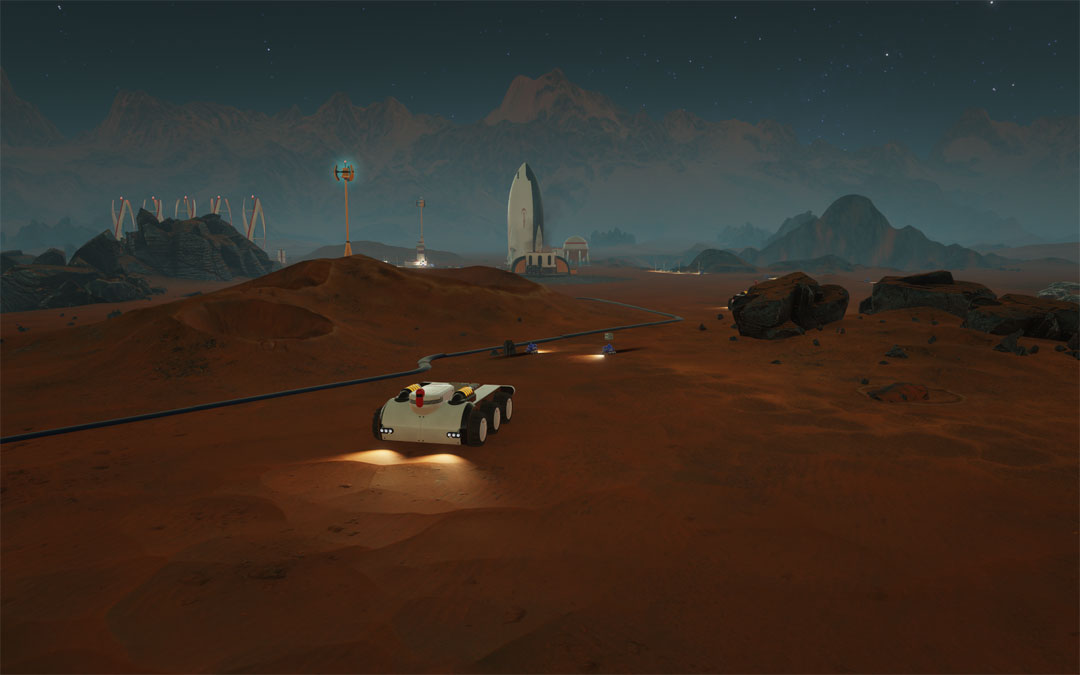 The initial trip to Mars will see no colonist for reasons that will become apparent later. Before landing on the new home, Surviving Mars will let you scope out a Mars fully rendered from NASA’s data, spinning it as a globe to the heart’s content until finding the perfect allocation of resources and avoiding the planet’s element effects as much as possible. Unless feeling extremely comfortable with city building games, it’s advisable to pick a location on Mars rich in resources and low in meteor showers or dust storms for obvious reasons, but the various terrain of Mars will prove less important than the map being generated each time between real data and the game.

No matter where one picks to begin colonization of Mars, it will always be represented in an easy to use 10×10 grid. With the entire planet as a choice of potential landings, it guarantees every playthrough will be different. Landing on Mars is important for several reasons, but one of the biggest lessons to take away is making sure to unload resources and fuel up for a return trip to earth ASAP. Getting a healthy cycle of rocket flights going in the early stages is everything. Rockets not only bring cargo, but colonists as well. 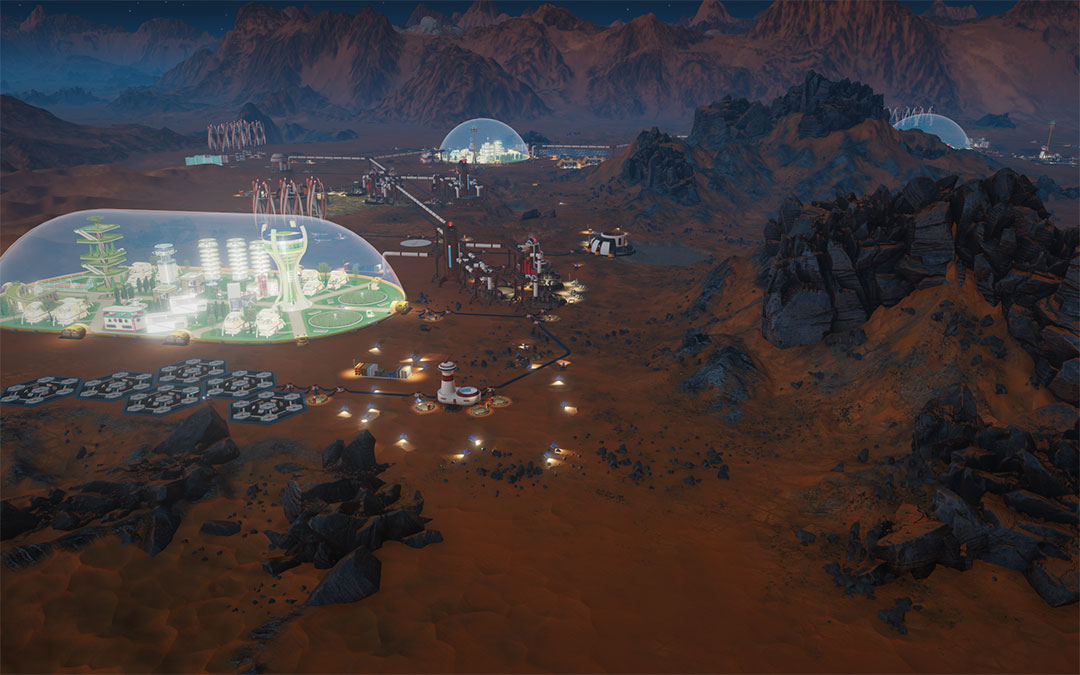 The first rocket should have three vehicles on it crucial to surviving on Mars: the Rover, Transport and Explorer, along with Drones, but these are dedicated to the colony at large. Drones will end up doing most of the heavy lifting on Mars because of its inhospitable environment. Much of the early game is dominated by drones laying the groundwork to welcome the first colonist to their new home. Along with an hourly day/night cycle, time is measured in Sols (one earth year). The first few Sols will be constructing power-grids, getting other resource sites ready and laying literal ground work for the first colonist. All this resource gathering is in lead up to building the first Dome. Domes are where colonist live and thrive; their entire lives will be spent in these Domes and making the most of their new home isn’t an option, it’s the way of life.

Domes need three things to function: power (all structures), oxygen and water. Things here on earth that most take for granted. If any of these three things goes down, it could mean the end of the first colony before the true colonization of Mars has even began. The first colonist needs to survive ten Sols before others will even think of joining a mission to Mars, but after those ten years the flood gates will open and soon Mars could be a thriving Colony rivaling the biggest cities back on earth. As the colony grows, so too will the domes. Domes can be filled with a variety of structures from apartments to hydroponic farms, to schools and parks. With new research being discovered by colonist daily, breakthroughs in science, industry and agriculture happen right before their eyes. Colonists are so important in fact, they are given individual names, traits and beliefs. They will grow, love have children and die all on Mars and it’s up to the player to see them through to becoming a thriving home, even if a bit of weirdness gets in the way and Mars holds more than one secret. 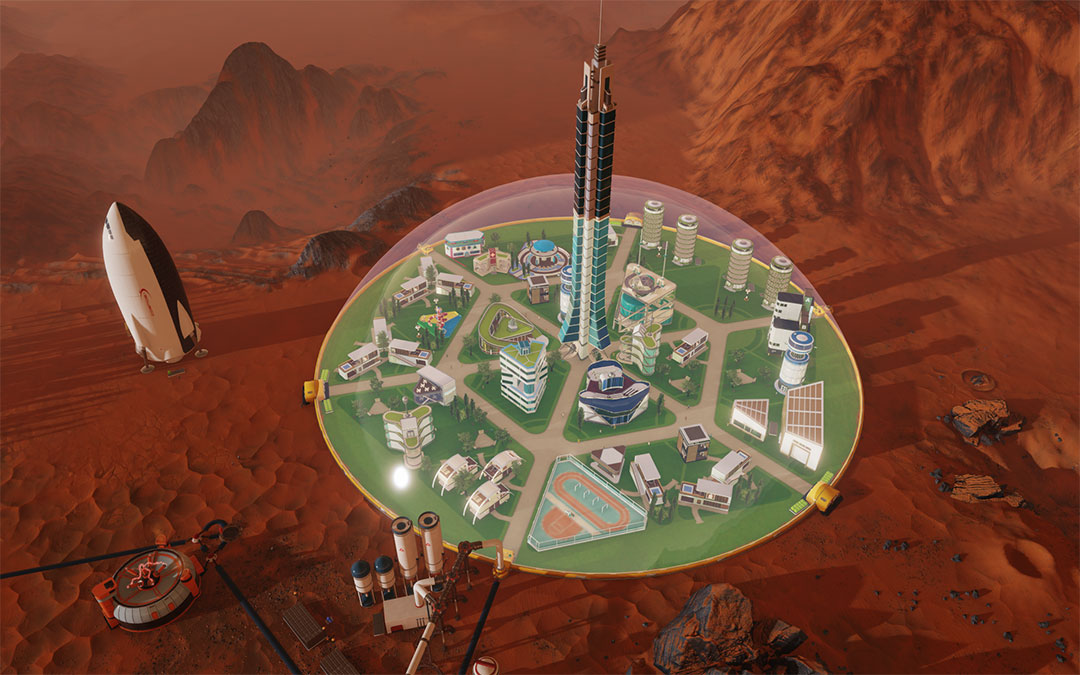 One of the choices not mentioned earlier when creating a new game was the Mystery choice. Mystery is a choice that will predetermine endgame for Surviving Mars and it goes deep. Haemimont are obviously fans of weird old-school sci-fi because Surviving Mars is teeming with it. Colonists might think they’re safe and happy on their new home, but what happens when aliens show up and those aliens aren’t little green men but something even more horrifying? What happens when the AI workers that were such a breakthrough in technology begin to truly think for themselves? What has been happening back on Earth during the time the colony has been steadily growing; are things OK back home? All these questions revolve around the Mysteries of Surviving Mars and make a great city sim survival game even more astounding. It adds just the right amount of intrigue that is appropriate for the territory of space and sci-fi. It draws players into a late game that could otherwise be stagnate, giving purpose to an established colony.

The classic sci-fi vibe doesn’t just resonate with the end game, though. Everything about Surviving Mars from the slick logos to the retro-looking, Jetsons-esque bubbles show off this aesthetic. One of the best features might be the radio; it’s hard not to flip through the different channels depending on the mood. From surfer rock back home to a Mars radio station, the stations even have banter for certain radio DJs giving it that perfect feel. Mars is visually stunning and the camera can be pulled to all sorts of angles to get up close towards the colonist living in this unforgiving environment. There is even a photo mode to remember all the hard work or destruction that will happen throughout the colony. 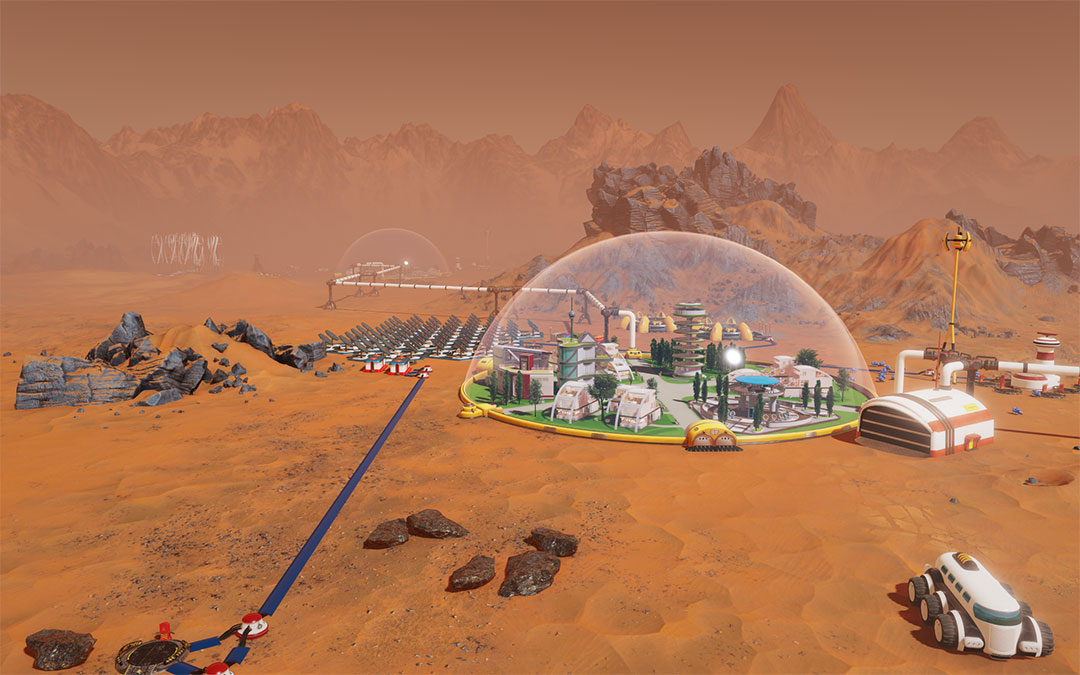 Surviving Mars is a new twist on a classic game structure. Haemimont have outdone themselves taking everything they learned from Tropico and expanding upon it. Surviving Mars isn’t just a fun city builder, but a nod to a different age of sci-fi when aliens were weird and the universe seemed limitless. Unfortunately, some might be turned off by lack of tutorial, as it can be confusing in the early hours as to what everything does due to a rich structure. What little tutorials are there don’t help all that much. If one can get past these early hours, especially newcomers to the genre, then Surviving Mars will prove to be a joy. It’s a truly-rewarding game and feels even better building a city with such unforgiving odds, backed by the strangeness of classic sci-fi. Surviving Mars is a gem and is sure to only go further through the stars from here.