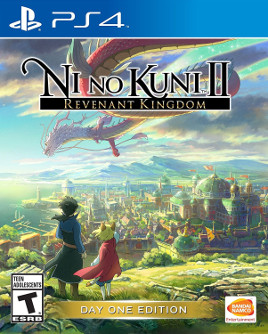 Ni no Kuni: Wrath of the White Witch was an adventure that spanned across two worlds, a modern world not unlike our own and a fantasy world filled with magic and monsters. Featuring animation by Studio Ghibli, Ni no Kuni: Wrath of the White Witch had a certain element of wonder and whimsy about it; playing it felt like stepping into an anime version of a Harry Potter. Ni no Kuni II: Revenant Kingdom maintains this dual world feature, but beyond that the sequel branches off down a different path from the original. Instead of playing a young boy sucked into this new world to discover how to use magic, the game begins as an older man named Roland in a position of power and influence.

Ni no Kuni II: Revenant Kingdom begins by thrusting Roland into the kingdom of Ding Dong Dell after a catastrophe in his world, not unlike how Oliver got acquainted with Drippy not long after his own tragedy. In Ding Dong Dell Roland appears to have regressed to a much younger age, possibly in his twenties or thirties. Roland is greeted by the young would be king of Ding Dong Dell, Evan Pettiwhisker of the House of Tildrum, who naturally views Roland as a threat. Given Roland’s experience in politics and running a country, he quickly figures out the royal guards are not there to protect Evan and he conveniently entered this world during a coup to usurp the throne, being carried out by none other than Mausinger, someone who was believed to be an ally. Evan is able to escape to safety thanks to Roland’s assistance, but saving his life comes at the cost of his kingdom. In order for Evan to reclaim his throne, he needs to obtain a Kingmaker which can only be done after he is deemed worthy by completing the Kingmaker’s Trials.

After the usurped king and his newfound otherworldly companion escape Mausinger’s takeover, the game world starts to look more familiar to returning fans. The overworld design looks as though it was plucked straight from the PlayStation 3 title, albeit with some improvements due to the PlayStation 4’s higher resolution and processing power. Once again we have an incredibly detailed three dimensional world that looks much more realistic than the animated characters and creatures found roaming across it. 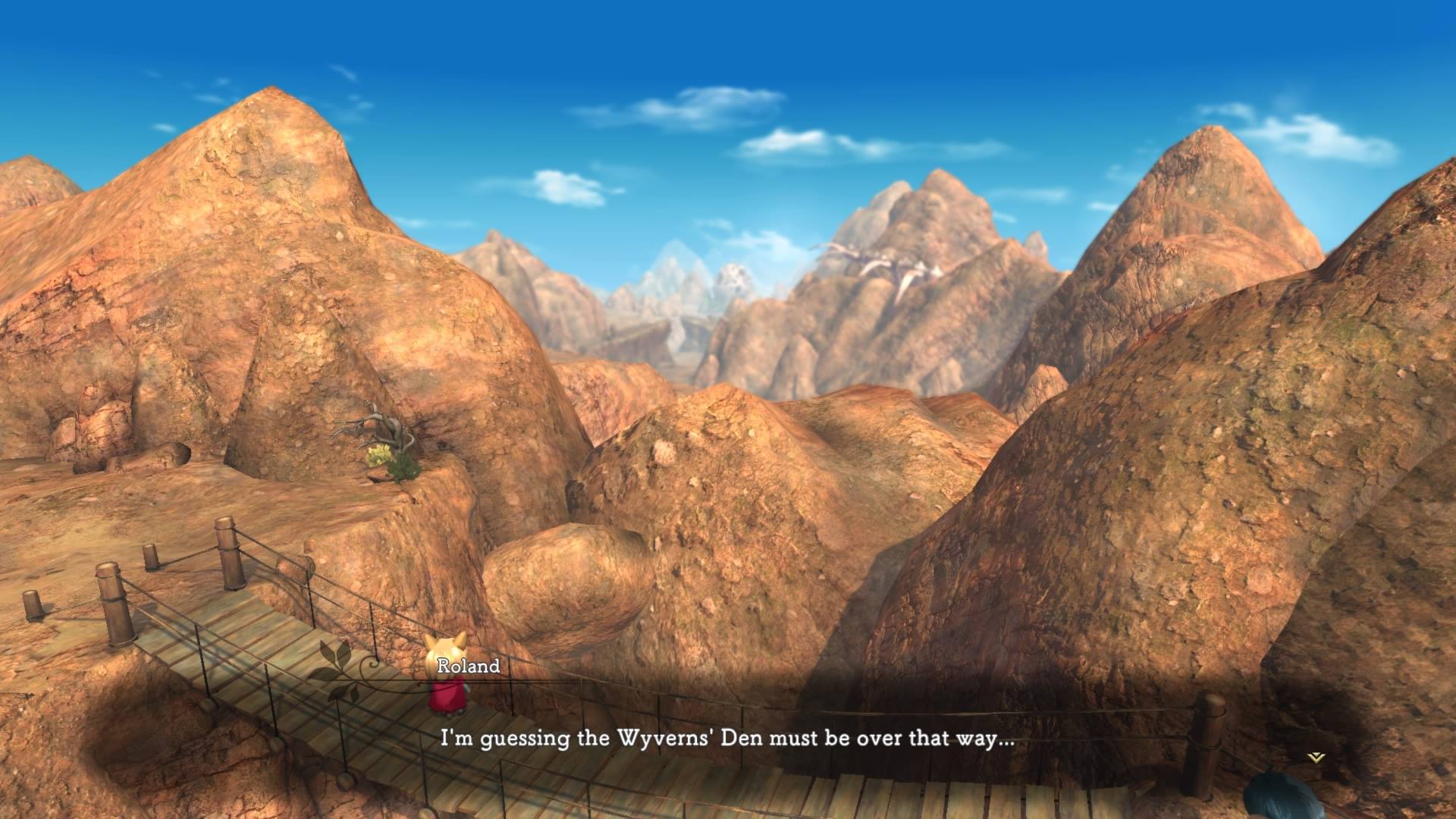 While this dichotomy sounds like it could be jarring, it actually only contributes to the overall visual quality of this title. Wrath of the White Witch set a high bar for quality visuals, and relative to their release dates and consoles, Revenant Kingdom doesn’t disappoint in living up to the expectations its predecessor set. Whether discussing the playable dungeon maps, overworld or creature design, Ni no Kuni II: Revenant Kingdom is a feast for the eyes as the artists have mastered the art of merging traditional anime visuals with 3D rendering.

The core gameplay will feel comfortable to returning fans, but there are some noteworthy changes to the system. Battles are still confined to an arena with all enemies visible on the map prior to engaging them, but the controls shift to a more action-oriented system once engaged. Instead of controlling the assorted monster companions, Revenant Kingdom takes on a more traditional approach by having the player take direct controls over one of the three active party members. The player can quickly swap between which party member they are controlling and change their weapons on the fly, being able to equip three melee weapons and one ranged weapon. Battles are fought in real time and space, so for example any flying enemies would need to be dealt with by jumping melee attacks or ranged attacks. Each character can also equip up to four different skills that consume mana, and activating these is as easy as holding down R2 and pressing the assigned button. 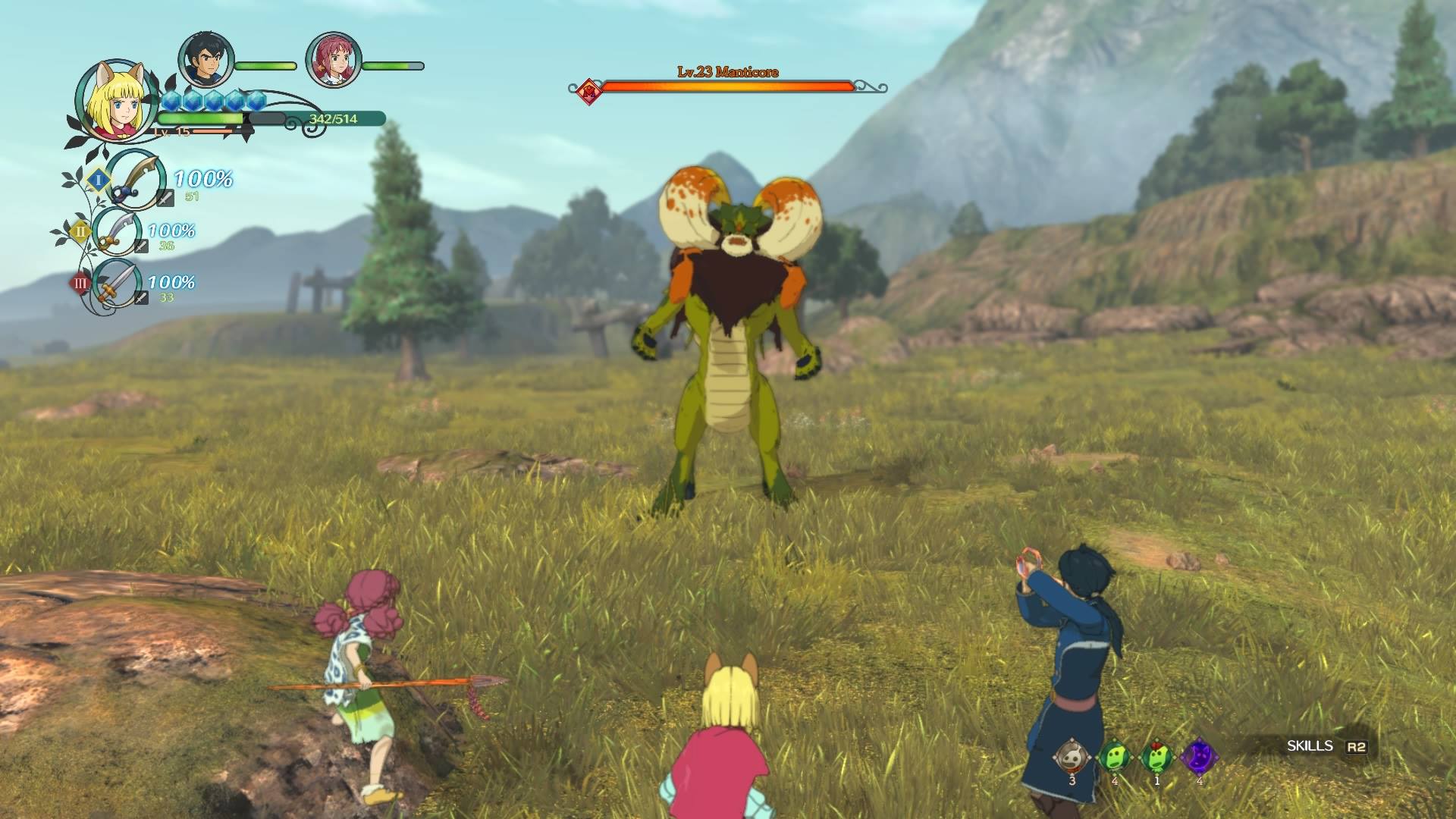 Wrath of the White Witch had a certain Pokemon like quality to it, where players would collect various monsters to fight by their side and would level them up and evolve them. Revenant Kingdom doesn’t have the same gotta catch ’em all approach, but that doesn’t mean there won’t be any odd friendly monsters running around the battlefield lending a helping hand. The new creatures are Higgledies, which are weird little bipedal critters that have special abilities. Trying to control Higgledies in the heat of battle is similar to herding cats. They tend to run around and do their own things, like randomly attacking enemies, but when they group in a circle is the player’s opportunity to have them unleash their special action. This can be a variety of different things, such as giving life restoring green orbs to the player or manning a cannon to add some artillery support or creating some purple vortex of death. Only four of these guys can be taken into battle, but after amassing a small army of them swapping them out and experimenting with different combinations can greatly impact the flow of battle.

Ni no Kuni II: Revenant Kingdom is in many ways a traditional JRPG. The plot centers around a young lad trying to rise up after a tragedy and end up single handedly overcoming some great evil that poses an immense threat to the world, more accurately single handedly with some help from a small group of friends. The story may not deviate too far away from expected genre tropes, but is memorable and engaging nonetheless. The supporting cast that joins Roland and Evan suffer from a bit of being tropecast, but that can be forgiven due to how each one of them manages to come alive as part of this fantasy world. The characters, story, music and visuals all come together to bring the world of Ni no Kuni II: Revenant Kingdom to life in a way that feels as though the player has entered this magical world. While the main portion of the game is a traditional JRPG fan’s dream, there are a few other gameplay features that help set this one apart from its predecessor and help establish Evan Pettiwhisker Tildrum as the budding king he is. 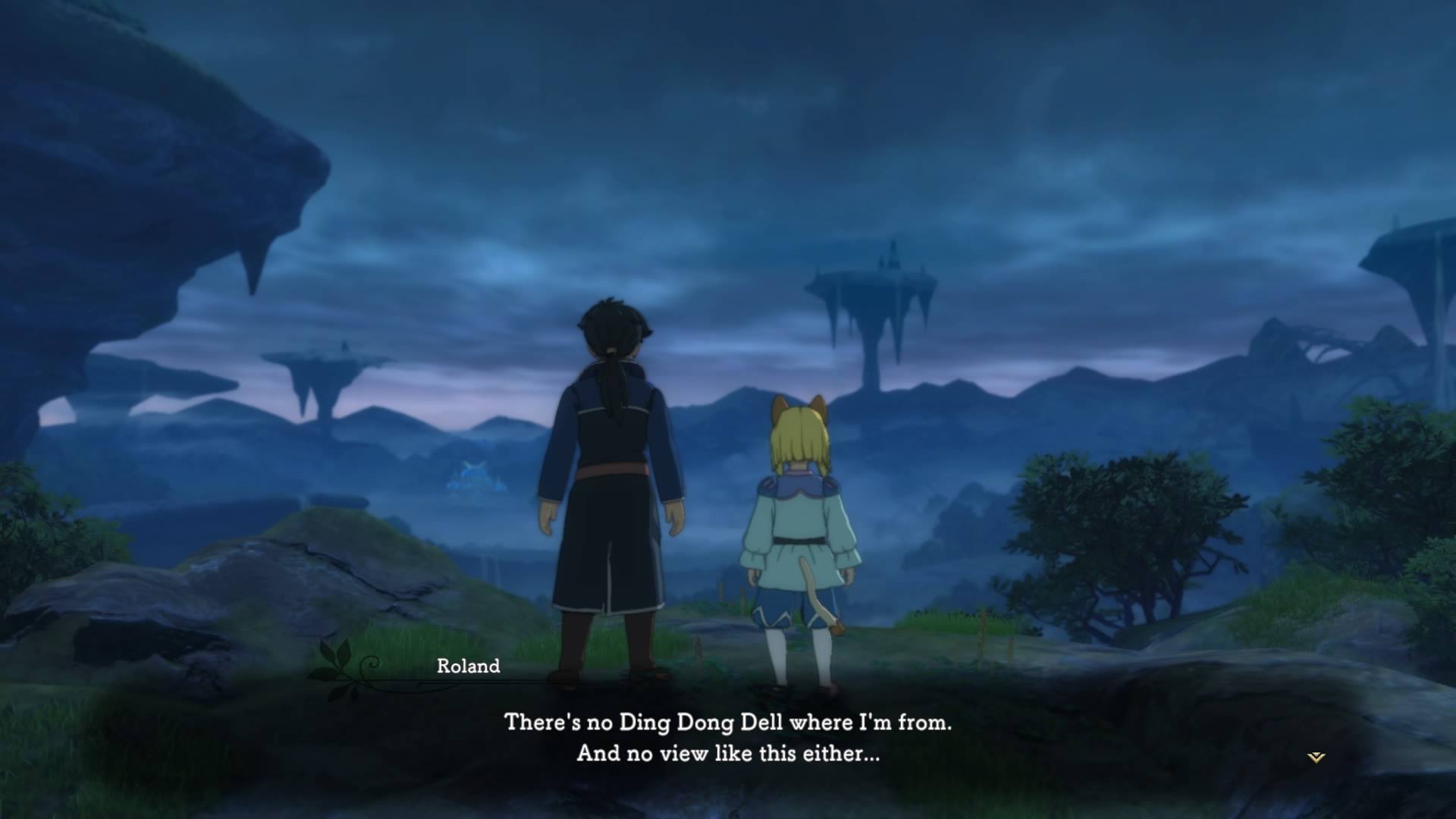 The first addition is an RTS-inspired battle mode called Skirmish, which is Evan leading his troops into battle. These battles are actually quite simple by RTS standards, but provide a break in the standard formula and mix up gameplay a bit. The graphic mode for a Skirmish stays in the standard overworld map view where Evan and his companions are in their chibi forms and they just basically run around on the battlefield, fighting their enemies and destroying barriers. There is a semblance of a rock paper scissors system in place where swords beat hammers, hammers beat spears and spears beat swords, but it’s still nothing too exciting and simply charging into battle and throwing out some special moves is about all it takes to win. One of the more satisfying special moves comes courtesy of the sky pirates where a squadron of their airships bombs the enemy forces and that can turn the tide of battle quite quickly. if the player can pull that off when several enemy groups are clustered together.

It would be a bit of a letdown if Evan went through all this trouble to get his Kingmaker and didn’t get to actually build a kingdom. Thankfully that isn’t a concern because after a few chapters the Kingdom Building mode gets unlocked. Like Skirmish, this is a rather simplified version of a city management simulation but again this is first and foremost an RPG. This particular mode in spite of its simplicity can be rather addictive. As king, Evan determines what facilities are constructed, who occupies them and what the research and development priorities are. There are facilities that develop spells, train Higgledies, make weapons and armor, make food, develop medicines and gather natural resources like lumber to name a few of them. A special currency is required to build and expand these facilities which accumulates over time within the kingdom. To conduct research to improve each facility, Evan must assign his beloved citizens to work in each facility and not all citizens are equal for all jobs. Batu for example has a decent War IQ, so he can do decent work in the weapon making facility but when it comes to the Higgledies Auntie Martha is the only logical choice to work in the Higglery. Watching Evan’s kingdom grow into a noteworthy world power is one of the more satisfying elements of this title. 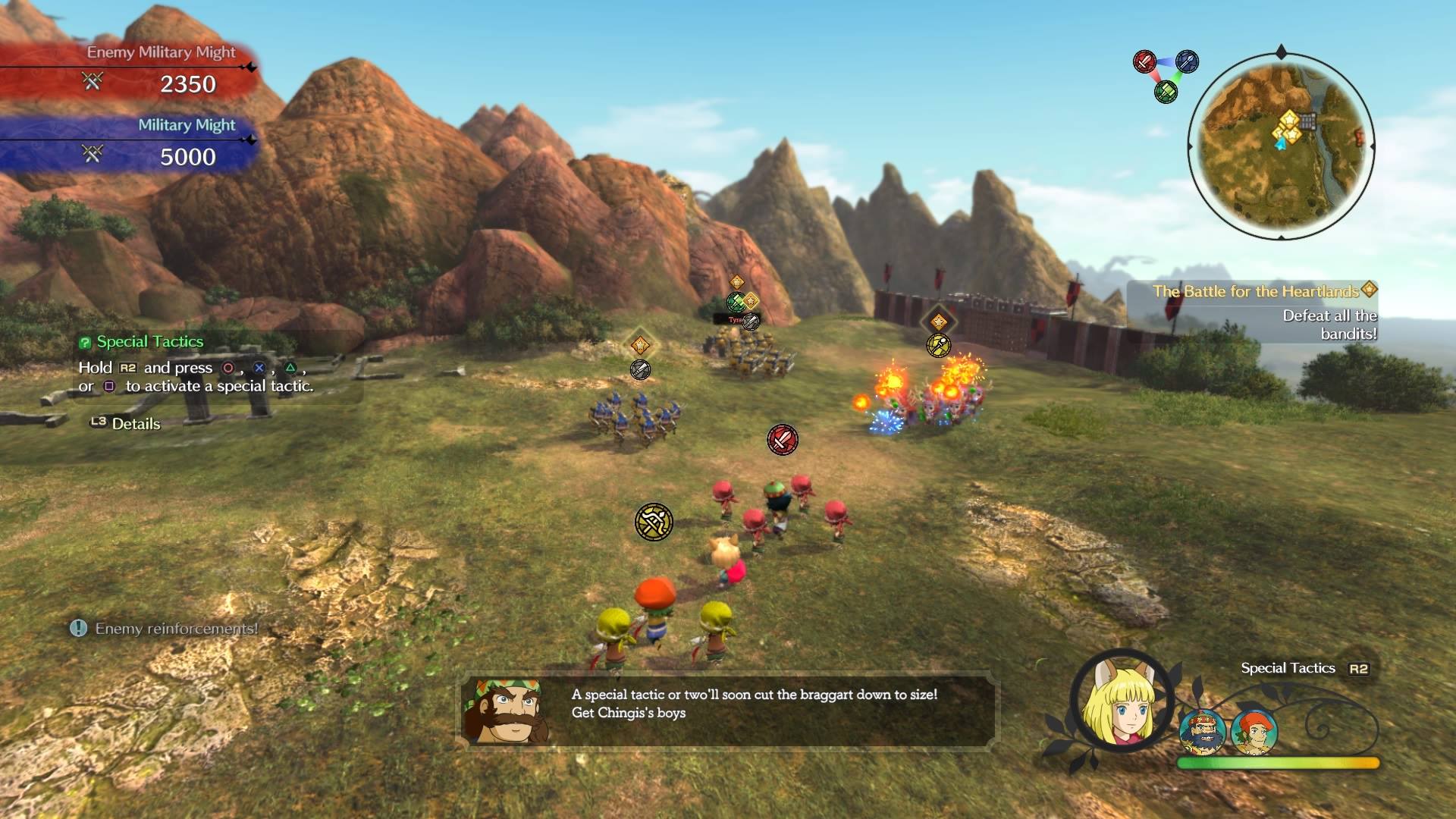 Ni no Kuni II: Revenant Kingdom is able to create a brand new world and adventure separate from Wrath of the White Witch, but is able to feel familiar enough where fans of the first game will feel right at home. The world that Roland is transported into is truly a wonderful realm of fantasy filled with anthropomorphic citizens and horrific beasts, but as we get to know Evan, Tami, Niall and all the other characters, it’s easy to become part of the world as Evan’s new kingdom rises up after he was forced out of Ding Dong Dell. The Skirmishes and Kingdom building are nice additions to make the role of a king feel more complete, but neither of those modes are what make this title great. Ni no Kuni II: Revenant Kingdom excels in delivering a top-notch JRPG by creating a magical world filled with great characters and visuals.