Monster Prom began its life on Kickstarter, where it shot past its initial goal and is now set to release on Steam in less than a month. Come April 27, gamers can experience this quirky monster dating simulator rife with humor, surprising depth and endless replayability.

The player has three weeks to find a date to monster prom – an unsurprisingly complex ordeal for anyone who remembers the dizzying intricacies of high school romance. The player begins by picking their character, which could be the werewolf jock, or the burnt-out gorgon, or even the hot-headed demon boy. Picking your character isn’t simply an aesthetic choice, as each comes with their own set of base stats, which include Smarts, Boldness, Creativity, Charm, Fun and Money. You’ll also answer a brief (and hilarious) questionnaire that helps determine those base stats.

These stats are imperative to the game’s progression and pay off, as potential suitors will or won’t accept your advances based on certain attributes. You can increase these base stats by participating in events, like going to gym class or sitting with certain monsters in the cafeteria. These choices can raise or lower your stats, depending on which dialogue options you choose. You can even buy items like a voodoo doll’s severed head or vials of blood from a merchant in order to increase stats further. In fact, you can manage to take the merchant to prom if you’re cunning enough to win her favor.

The game takes place over a three week period, during which over 1,000 separate possible situations may arise, adding to the game’s replayability. Though the characters are all monsters, Spooky High is a decidedly modern school, and the student’s lives reflect this. The game includes dating apps, emoji use and even inappropriate cell-phone pictures you can choose to send to a potential suitor (which may or may not be attractive to some monsters, depending on their taste). 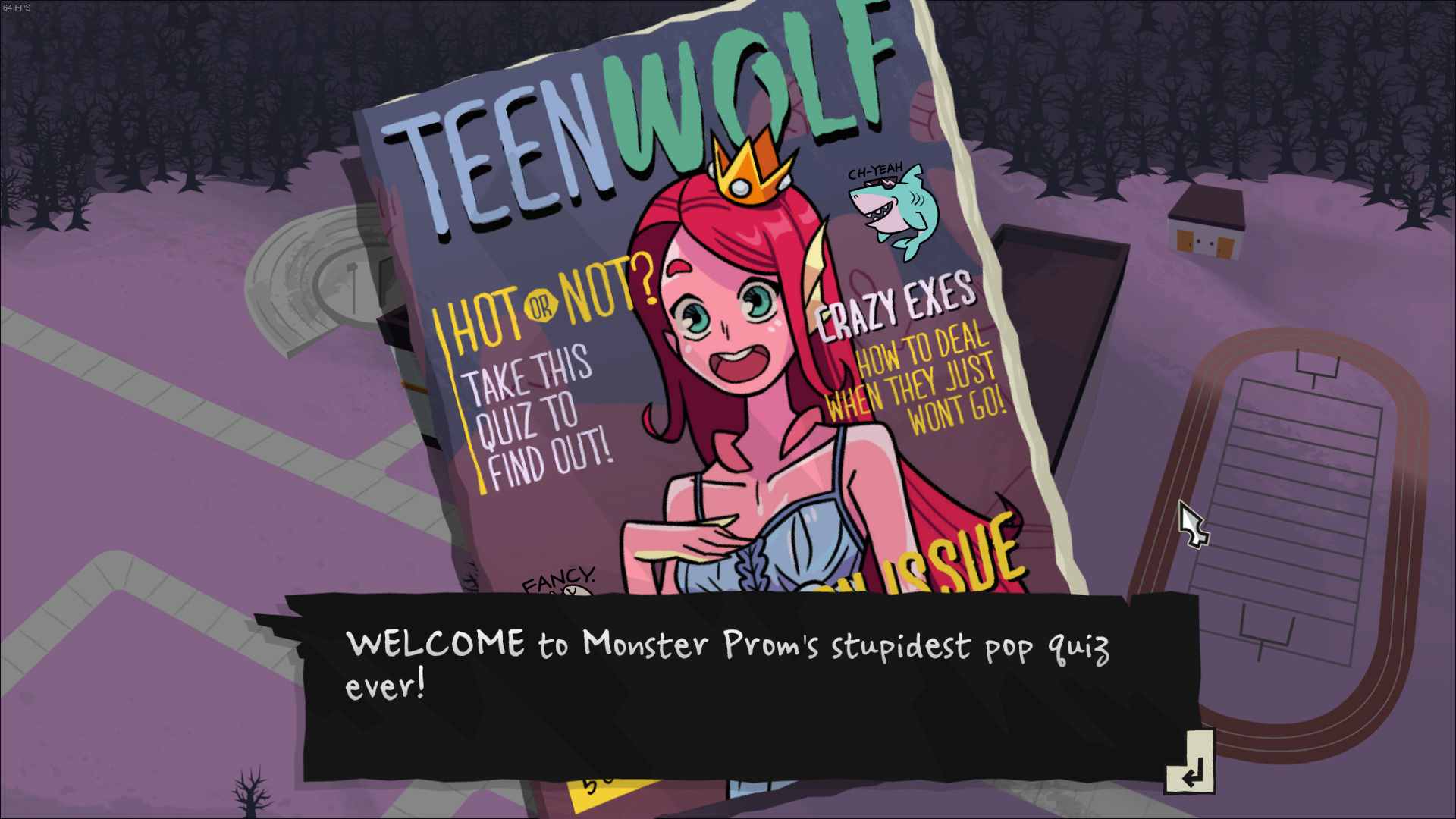 Monster Prom is, above all, a funny experience. Written by Cory O’Brien, Maggie Herskowitz and Julián Quijano, it pokes fun at any topic under the sun, and does so throughout its one-hour (or so) playtime. Though this may seem brief, the game’s undeniable replayablity will considerably extend its length. Think of Monster Prom as more of a board game, one that is intended to be played from beginning to end in a single session and replayed over and over again.

Though the game can be played by a single player, it’s best tackled as a multiplayer experience. Up to four players can take turns on the same computer, picking their character, choosing events to attend, deciding on dialogue options and more back and forth. The multiplayer functionality becomes most interesting when players attempt to go after the same potential date, as choices and stats will become more important than ever to steal that ghost or ghoul out from under your friend’s beak. Monster Prom won’t have online multiplayer at launch, though it’s a possibility that a future patch may change that. 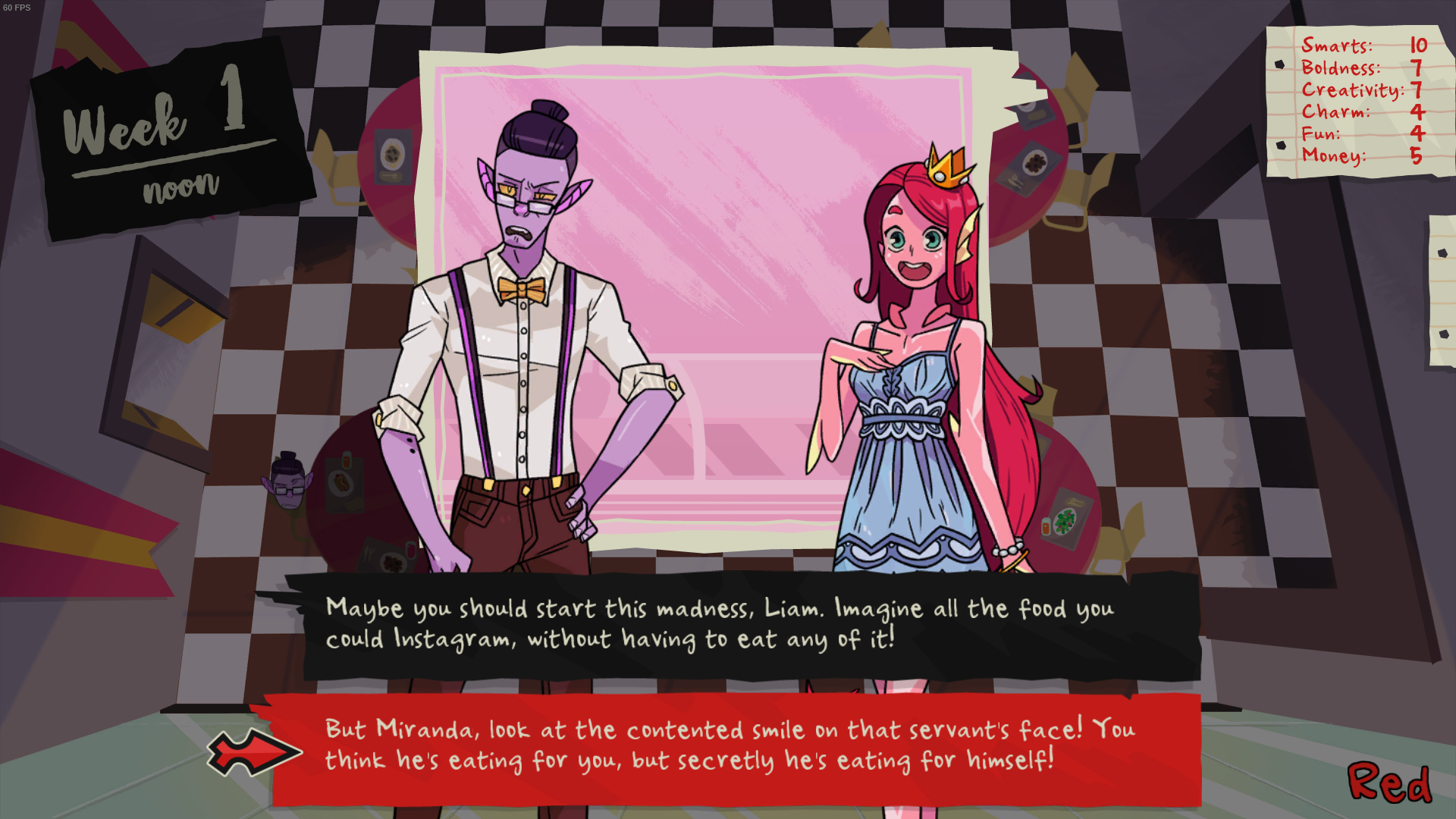 Monster Prom’s writing and progression are unique, but its art style sets it apart from the competition. The game’s lead artist Arthur Tien has done an excellent job incorporating every monster in the general cultural lexicon into the game then transforming them into high school archetypes. It’s distinct and colorful, making players gravitate towards one possible date or another simply depending on their design alone.

Monster Prom is a unique, multiplayer, monster dating simulator that is sure to delight players when it hits Steam on April 27. Developer Beautiful Glitch have crafted something special here and while it remains to be seen how big of a splash it will make when it comes out next month, it’s a game to keep on your radar. For more from GDC 2018 and Monster Prom, keep an eye on Hardcore Gamer.