Survios has made a name for itself by going all in on the VR market and delivering excellent games.  Raw Data is a unique FPS VR title and a stellar debut for the company. Sprint Vector proved you could move at high speeds without feeling nauseous. So, it shouldn’t be surprising to hear that their next project is tackling another genre, boxing. Creed: Rise to Glory will be Survios’ first foray into the boxing genre and their first title based on an existing IP. With the studio’s pedigree of finding new ways to experience genres in VR, how does Creed: Rise to Glory change the genre?

Creed: Rise to Glory is based on the established Creed and Rocky film franchises. You take on the role of Adonis Creed as he trains with Rocky Balboa and rises to glory. Based on the time with the demo, it wasn’t immediately clear how much of a story element the game would have or if it would somehow tie into the upcoming Creed II. Either way, it’s clear that the game’s real focus is on simulating boxing.

Rise to Glory utilizes Survios’ Phantom Melee Technology to create a boxing experience that packs a punch. A quick tutorial helps prep you for the upcoming match by having you throw punches, block and learn the various parts of the body you can hit. The tracking was good with the game following physical movements correctly. What makes the technology impressive isn’t just how precise the fighting is, but how it makes other elements of boxing feel more realistic. 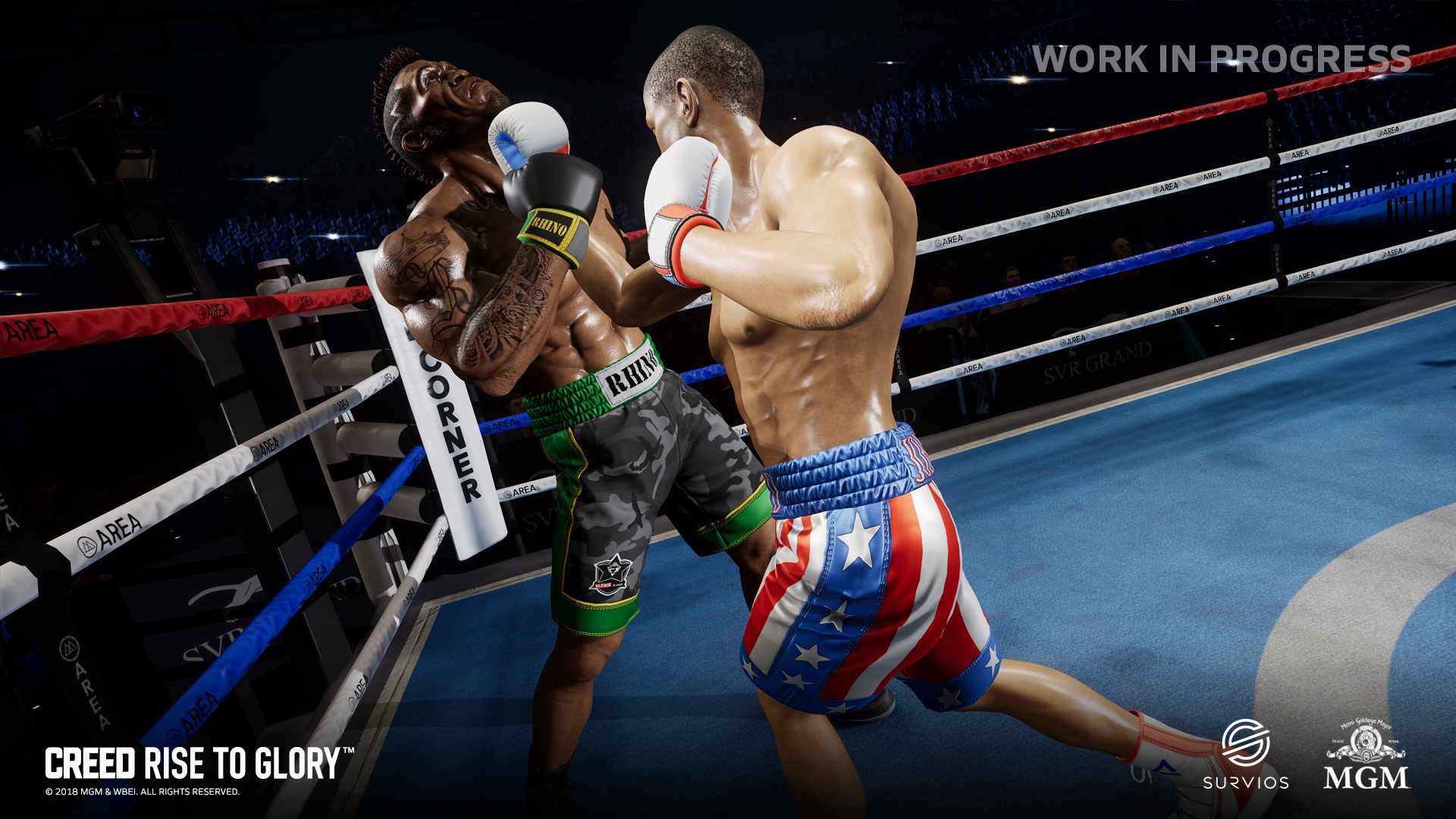 Stamina plays a large part in a Creed boxing match. Punch too quickly and your in-game Adonis will start to slow down and become sluggish. Players can keep track of Adonis’ current stamina by looking at his gloves. The redder they become, the more stamina Adonis has spent.

Rise to Glory also goes to great pains to make it feel like you’ve been hit. When taking a major hit, Adonis will be pushed back and time will slow down. You’ll then need to mirror his pose to regain control. While it sounds silly to imagine that, what Survios has done is create a system that feels tenser and involved than a typical VR fighting game.

Even tenser is the mini-game that comes with getting knocked down. When knocked out, it looks and feels like your senses have been punched out of your body. The camera pans out, color fades away and you’re left staring at Adonis’ body on the floor. You’ll have to flail your arms like you’re running to get back to Adonis’ body before the referee rules you defeated. Much like getting it hit, it sounds silly to imagine, but is compelling in-game. 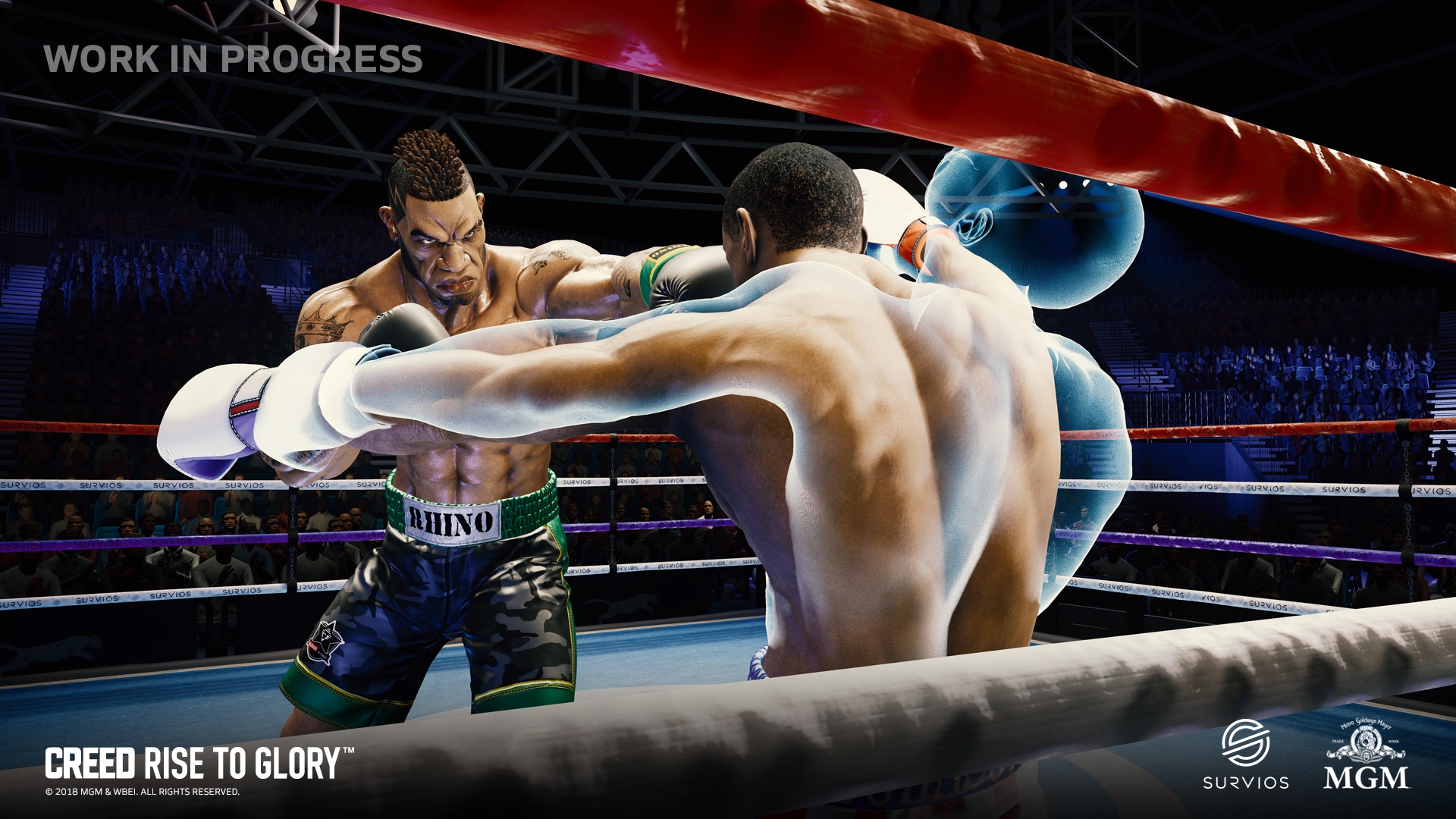 A lot is going on in Creed: Rise to Glory. You can’t just punch wildly like in Wii Sports and hope you win. You’ll need to combine various types of punches, ducking, blocking and the previously mentioned mini-games to claim victory. Despite not being able to move around the ring, matches are tense and fun to participate in. No word yet on how many matches will be included in the game.

Creed: Rise to Glory is shaping up to be a strong VR boxing title and another strong showing from Survios. No word yet on if there will be any form of multiplayer, nor do we know what platforms the game will eventually release. We’ll keep you updated should Survios make any announcements.