At this year’s GDC, Hardcore Gamer had the opportunity to go hands-on with EPYKA, a VR adventure game that takes advantage of the medium like few other games have before it. Made by brand new Italian studio Singular Perception, EPYKA puts players in the shoes of Dr. Scott Hudson, a man looking to discover the secrets in the lost world of EPYKA — which at the beginning simply appears to be a small island, but the game has more than a few secrets hidden beneath the surface. Though a specific date has not yet been announced, EPYKA is set to hit the HTC Vive and Oculus Rift later this year.

The gameplay of EPYKA is split evenly between 1:1 player inputs via motion controls and issuing commands to Jack, your loyal and endlessly useful canine companion. In the short slice of gameplay we experienced during GDC, Hudson and Jack begin on a beautiful, vibrant island full of foliage and ancient buildings. Jack behaves just like a real dog – he distrusts the crabs wandering on the beach, hopping around them, barking wildly at their mere presence. He’ll come right up to the player, practically begging to be petted and paid attention to. Luckily, Jack isn’t simply a glutton for affection: he’s core to EPYKA‘s gameplay, and is absolutely necessary to progress through its various puzzles. Think of him as a less temperamental and easier to control version of The Last Guardian‘s Trico. Jack leads Hudson to an old tower and the two immediately start to explore. 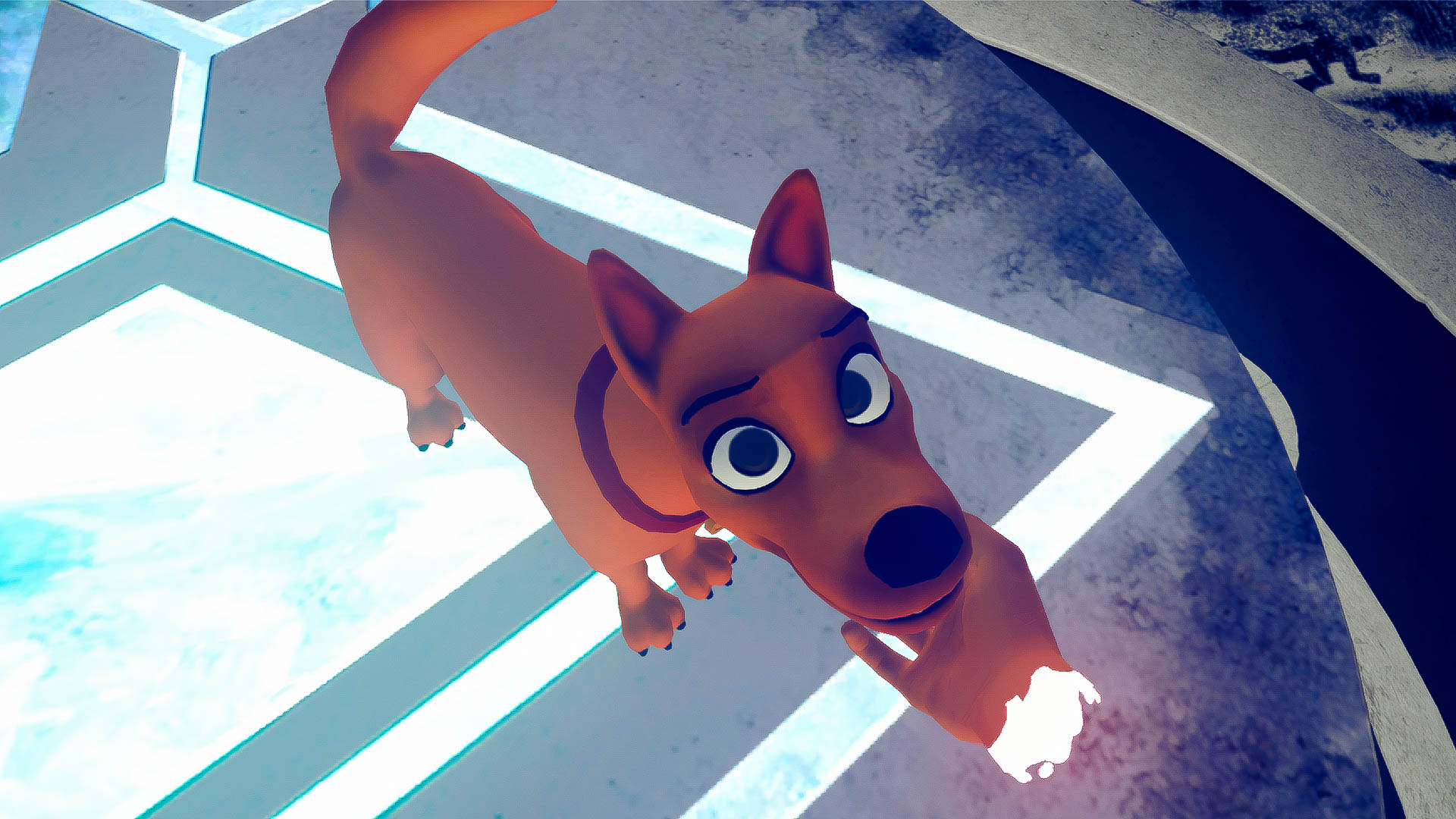 Like most VR adventure games, you move your avatar by pointing to spots in the 3D world to immediately teleport to. It works seamlessly, and commanding Jack works in a similar fashion – instead of Jack teleporting to a location, however, he’ll simply move there upon issuing the command. In this early portion of the game, this mechanic was used to have Jack initiate pressure plates to open doors for Hudson. Of course, there are often two plates to press, necessitating both Hudson and Jack to stand on them simultaneously. This is a classic, exceptionally simple puzzle mechanic we’ve come to expect from almost every game under the sun, but EPYKA begins to take advantage of VR more fully soon after.

Jack and Hudson discover a tablet of sorts, one that the player can grab hold of in real-space and looking through its glass body reveals runes scattered across the walls of the tower. The game requires the player to move around with the object hovering in front of their field of vision, making use of the full-body motion capabilities of VR that many other games hold back on. These runes correlate to symbols emblazoned on a treasure chest sitting in the center of the tower. If the player correctly ascertains the order in which to press these matching symbols on the chest, it will open and reveal a crystal. The physical movement of pressing these buttons whilst holding the motion controls feels indescribably natural and the standard movement and performance hiccups present in many VR games is nearly non-existent here. 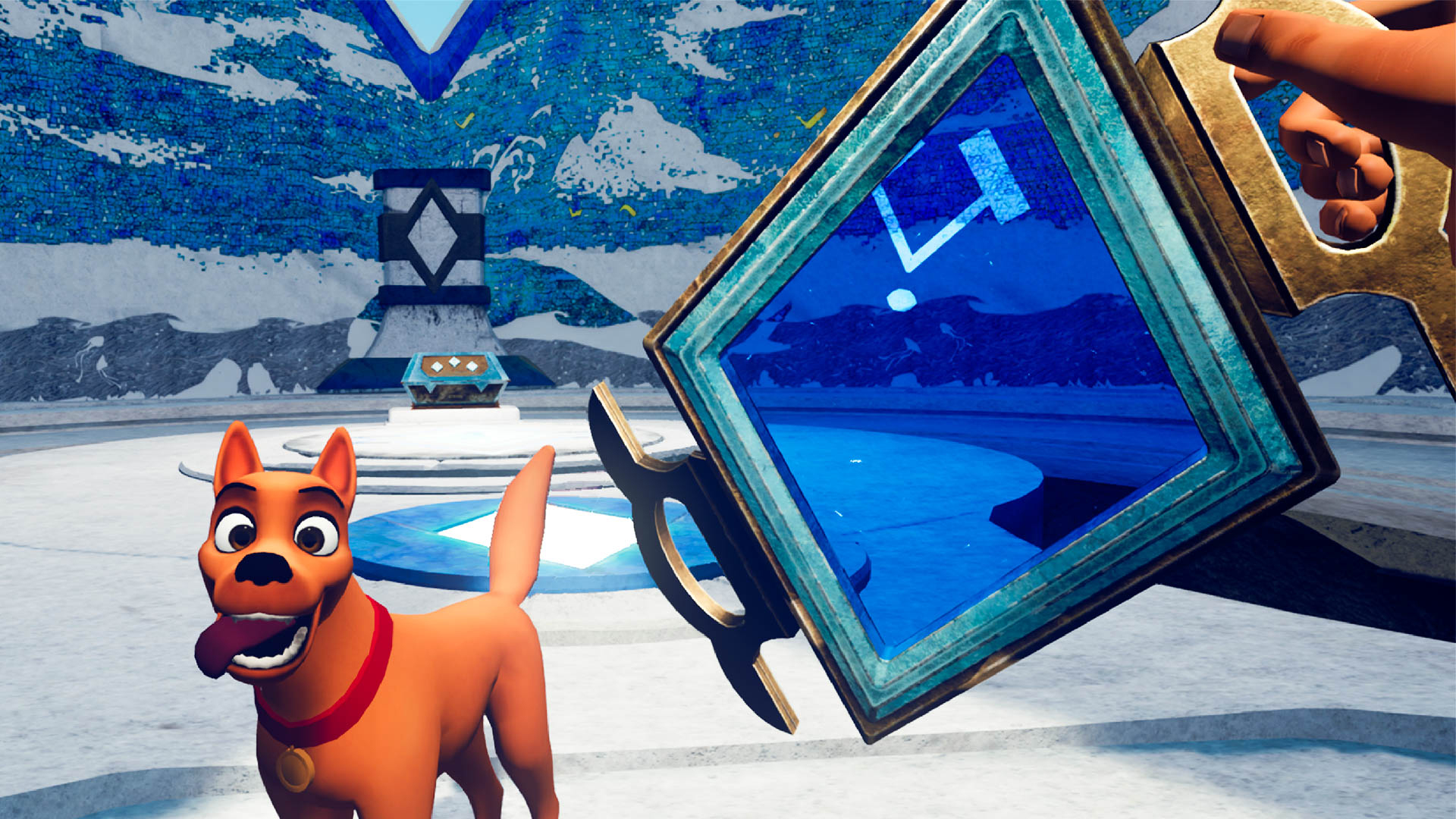 Upon touching this crystal, Hudson and Jack are teleported to the inside of a volcanic cavern, where they discover a mysterious woman. She briefly gives words of warning before a massive hand made of lava crashes down upon the plateau the trio are standing on, forcing the screen into black, making us wait until the full game is released to discover the rest of the puzzles and secrets the world of EPYKA has to offer.

Though this small slice showed relatively simple gameplay, the VR controls handled and felt better than nearly every other VR game we’ve had the chance to play thus far. Holding the glass tablet felt natural, as did moving your hands in real-space to push the buttons on the treasure chest. Jack is an adorable and useful companion, and we’ve been assured that his AI has been a major focus for Singular Perception, and it looks like their hard work is taking shape, as he behaves just as you’d expect man’s best friend to from moment to moment. 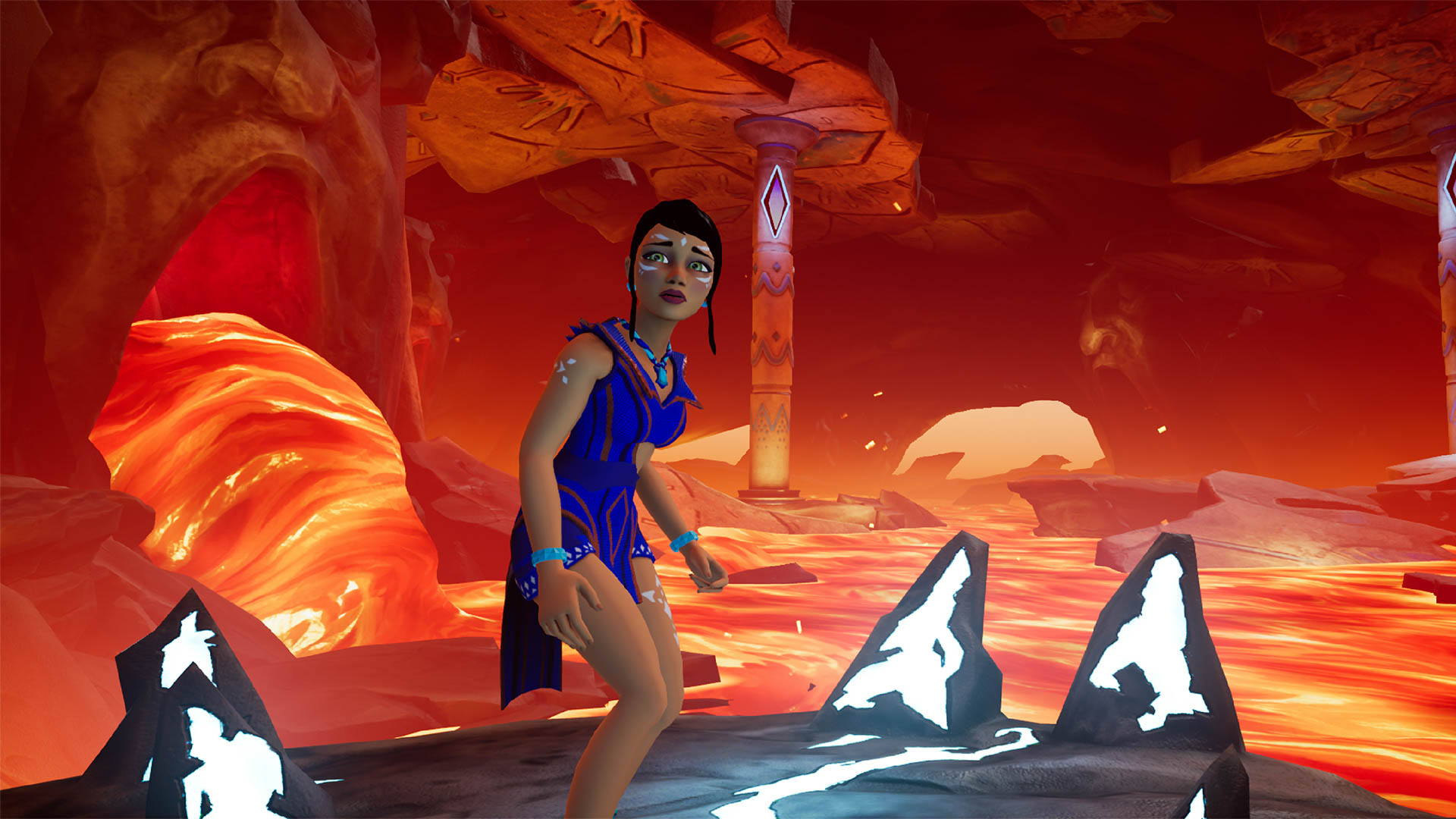 EPYKA is gorgeous, lush with saturation and detail. Though the graphics don’t focus on intense minutia, the overall effect of the nearly cel-shaded simplicity of the game is highly effective and gorgeous to experience on the HTC Vive on GDC’s show floor. Though there is still quite a bit of development time left for EPYKA, it currently feels exceptionally well-polished, with nary a misplaced asset or unsettling use of VR movement in sight. Unless you’re exceptionally prone to motion sickness in VR, don’t expect EPYKA to churn your stomach.

We’ve been told EPYKA will just be the first game in a much longer series that is planned to take place in this mysterious world. The creators believe it will take most players about three hours to make their way through EPYKA, leading them to assure us that it will not be a full-priced release. Though there’s currently no plan to make the game for PSVR, EPYKA will be coming to HTC Vive and Oculus Rift later this year. With all that it has going for it, it’s hard not to be impressed. Trust us – this is one VR game you’ll want to keep an eye on.