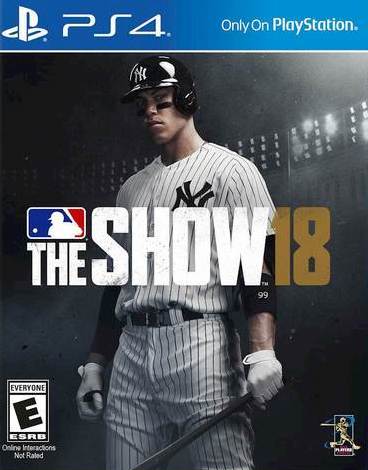 San Diego Studios has always pushed the limits of every PlayStation console with its MLB The Show franchise. The series has consistently been the most proper representation of its associated sport and that continues with MLB The Show 18. The task of improving a perfect representation of a sport becomes increasingly difficult, but the developers manage to apply new touches every year. Fans come for the excellent baseball experience but want things to stay fresh. MLB The Show 18 offers enough improvements in the right direction while unfortunately leaving some things out. The most important aspect is that the actual game of baseball is lights out and the visuals help knock it out of the park.

This is the first year I’ve owned an HDR television, so the option to have the best available visuals are there. The game consists of three visual options: balanced, sharper and faster. Running on a PS4 Pro, the sharper image option will add the most details and while the gameplay runs at a consistent frame rate, the cutscenes are extremely sluggish. The balanced option, which is the default option, combines the best of both worlds which may amount to some dynamic resolution. The option that seems the best, however, is faster as the game runs at a much smoother frame rate and animates extremely lifelike. There is some visual degradation but the player models and stadiums still look great in general. The HDR can look great at times, but sometimes the reflections off of objects and players is too much. It can truly bring afternoons to life in certain situations. The option can be turned on or off in the visual settings. The end result is the best looking rendition of MLB The Show to date.

San Diego Studios has implemented a much more accessible and visually-appealing menu. Plenty of tutorials that are easy on the eyes and simplified navigation in menus enrich the experience. The Show 18 also has presentation upgrades during games. It still has three choices for television presentation, but features full MLB Network score overlays. It can truly make people think you’re watching a real television broadcast. A few camera options have been added along with a ball tracer to follow the action. Another noticeable change is the dynamic crowd attendance. This will vary by how well you are doing, the day of the week, the weather and a few other things. If you start losing some games, you will see the crowd start to dwindle. 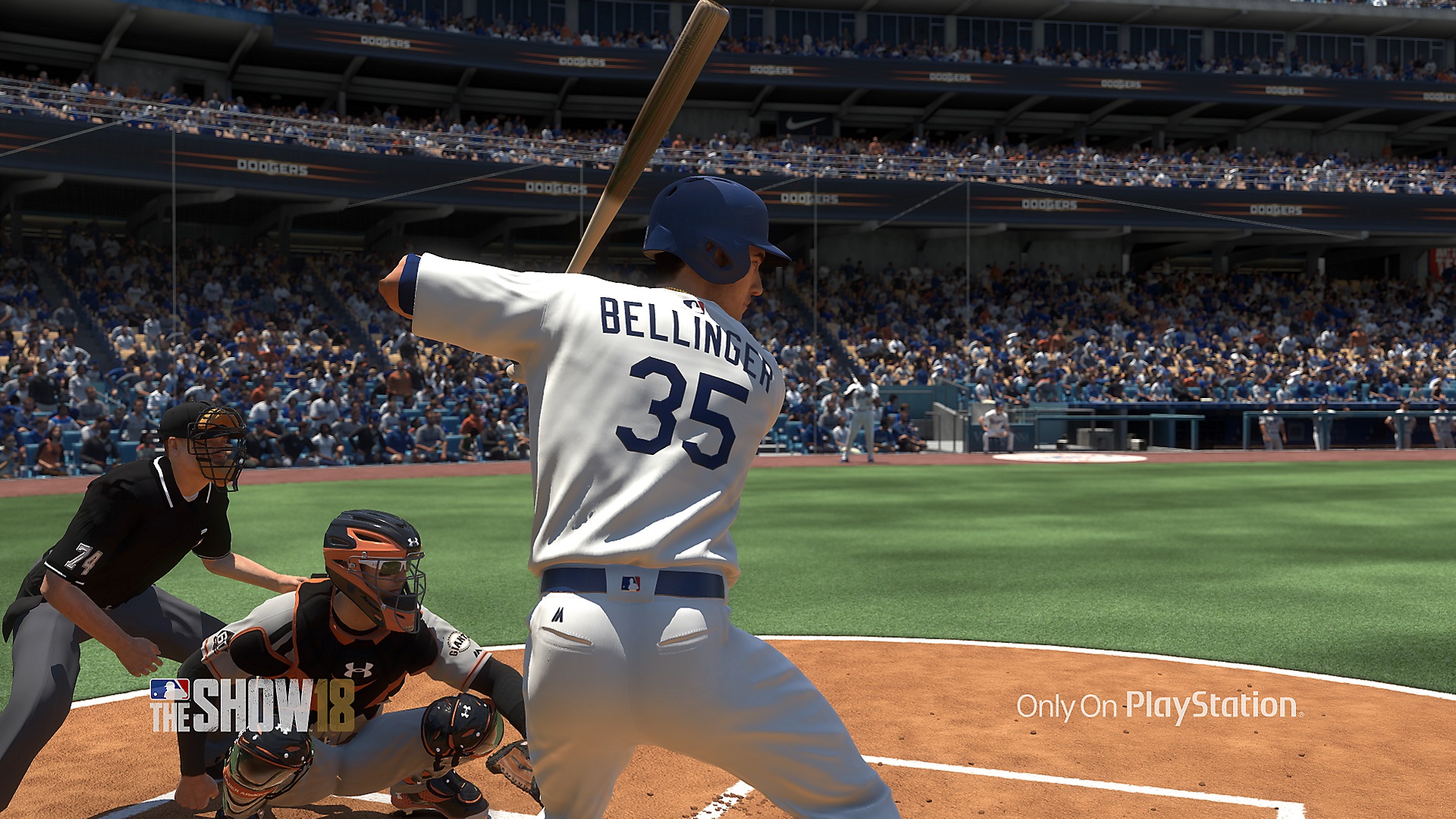 Ball physics have been improved and this is immediately noticeable. Hitting a ball feels fresh when it comes off the bat. The typical hits seem a bit more varied and even diving for a ball on defense and blocking it feels completely new. There’s a new swing graphic in the batter’s box that helps to prove that you swung early or late. One thing I have noticed is still the abundant amount of foul balls, which comes off as unreal sometimes. The game has the option to hit with a directional interface to aim your swing, zone to use a cursor, or analog for pure timing. Pitching interfaces still remain the same as well. There was once a time that every year featured a new way to hit or pitch, but nothing innovative has been added in recent years.

To complete the broadcast experience, Matt Vasgersian returns as the voice of The Show. He is joined by returning commentator Dan Plesac and new commentator Mark DeRosa. Neither outside of Vasgersian has a discerning voice and the commentary still can be repetitive. What was done going into this year was live recording between the three that allows for a more natural delivery. Vasgersian doesn’t come off as repetitive as he has in the past, which may be due to less puns and more focus on the action. There was a lot of dialogue created, but maybe grabbing whoever does official MLB Network broadcasts would be a good idea in the future or a separate commentary booth for each of the three broadcast options available. 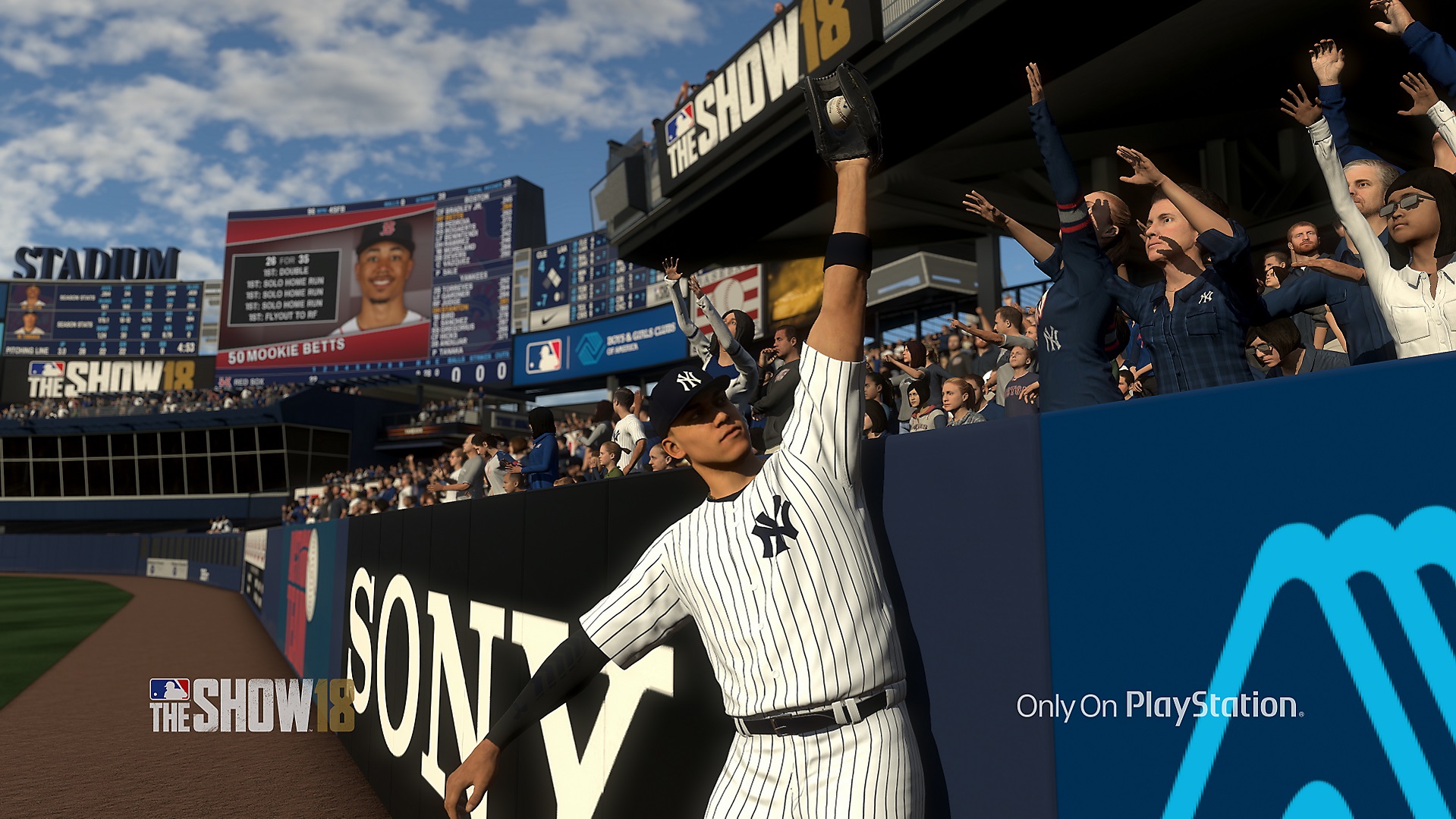 Franchise, Road to the Show and Diamond Dynasty returns as the premiere modes. Franchise mode feels more accessible and executing trades and signing players are very straightforward. The season is also broken down into different tiers to make it feel like it’s broken up. Upon starting the mode, players can choose how deep they want their options to be in terms of managing the teams. It still includes the daily radio show. Franchise is still meaningful with a fresh coat of paint. Diamond Dynasty is the card-based mode where players earn stubs and continue to build their team via the Risk-like Conquest Mode or playing online. Legends cards can be obtained such as Babe Ruth and Ken Griffey, Jr. These will vary in tiers so you may start getting a 70 rated Babe Ruth and kind of takes the fun out of it.

The most impressive mode in MLB The Show 18 is Road to the Show. In the past, players would create a player and play a entry game and get drafted, but it goes a bit deeper this year. Not having messed with the mode in recent years, I was impressed by the narration aspect and the speed of progression. Scouts will initially look at your skills in a practice and then your player goes on to play two trial games. If you don’t like where you’re drafted afterwards, you can go back to college. Selecting responses will help define the player you are as the mode features a good bit more backstage action. 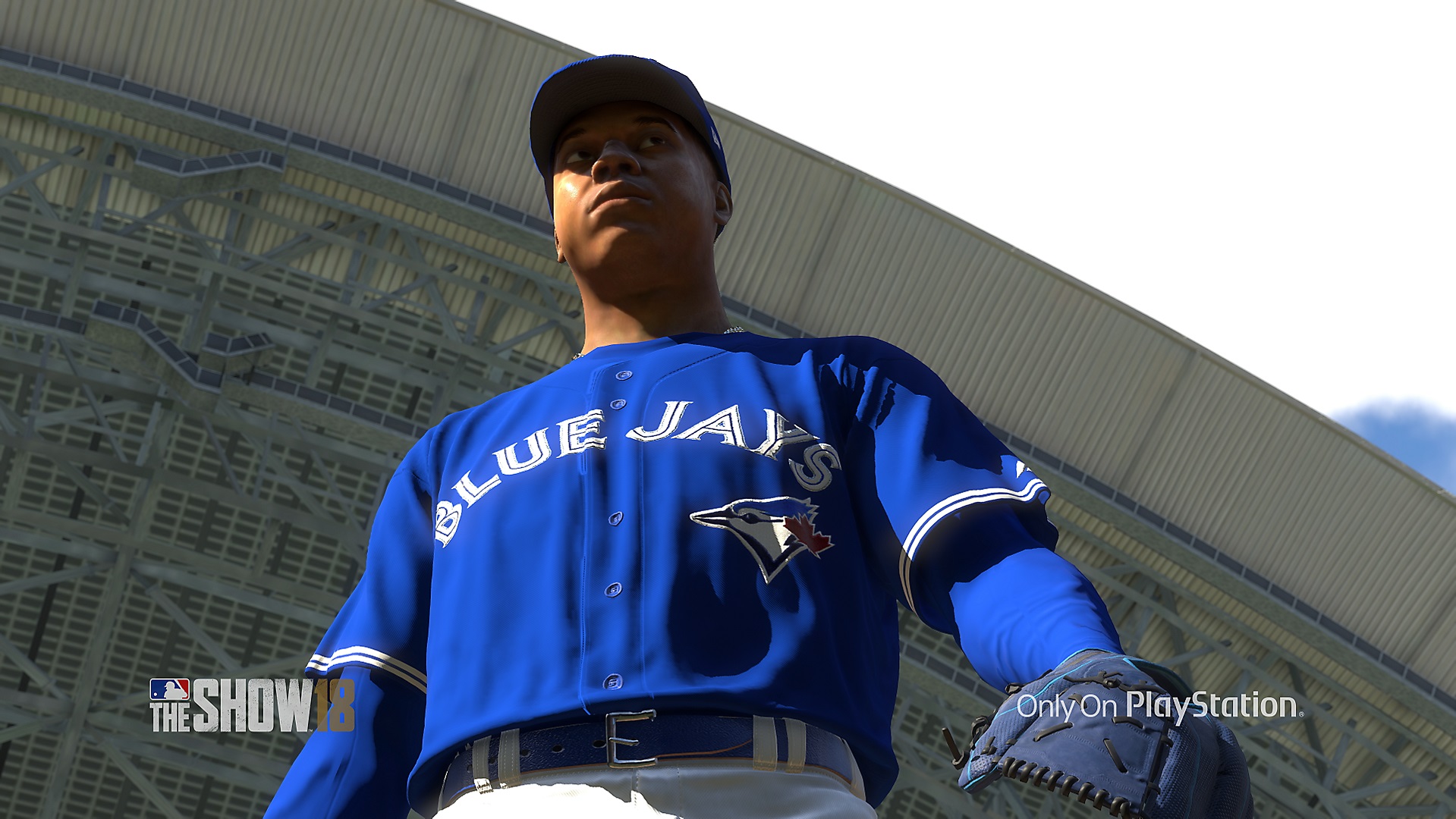 The control in the field will feel familiar. The Show tends to be more for advanced users in its action, even if the modes and menus are more user friendly. Fielding uses weight and momentum to move in the field. There are also still some quirks with baserunning such as trying to advance all and your runners just don’t do it. In Road to the Show, the fielding control feels even more difficult. The hitting and pitching are what stand out in the franchise but the fielding model could use some modernizing.

Other modes worth noting are the return of Retro Mode and the Daily Challenges. The Retro Mode features a 16-bit nostalgic overlay and plays an arcade-style of baseball. Your Franchise can even be played in this mode. This mode is geared for couch co-op and is a fun mode to mess around with. The Daily Challenges are addictive. The season started off with an Aaron Judge challenge that felt a bit like the classic Triple Play Baseball Extreme mode. Garnering points for hits and consistency, these modes change and offer incentives. 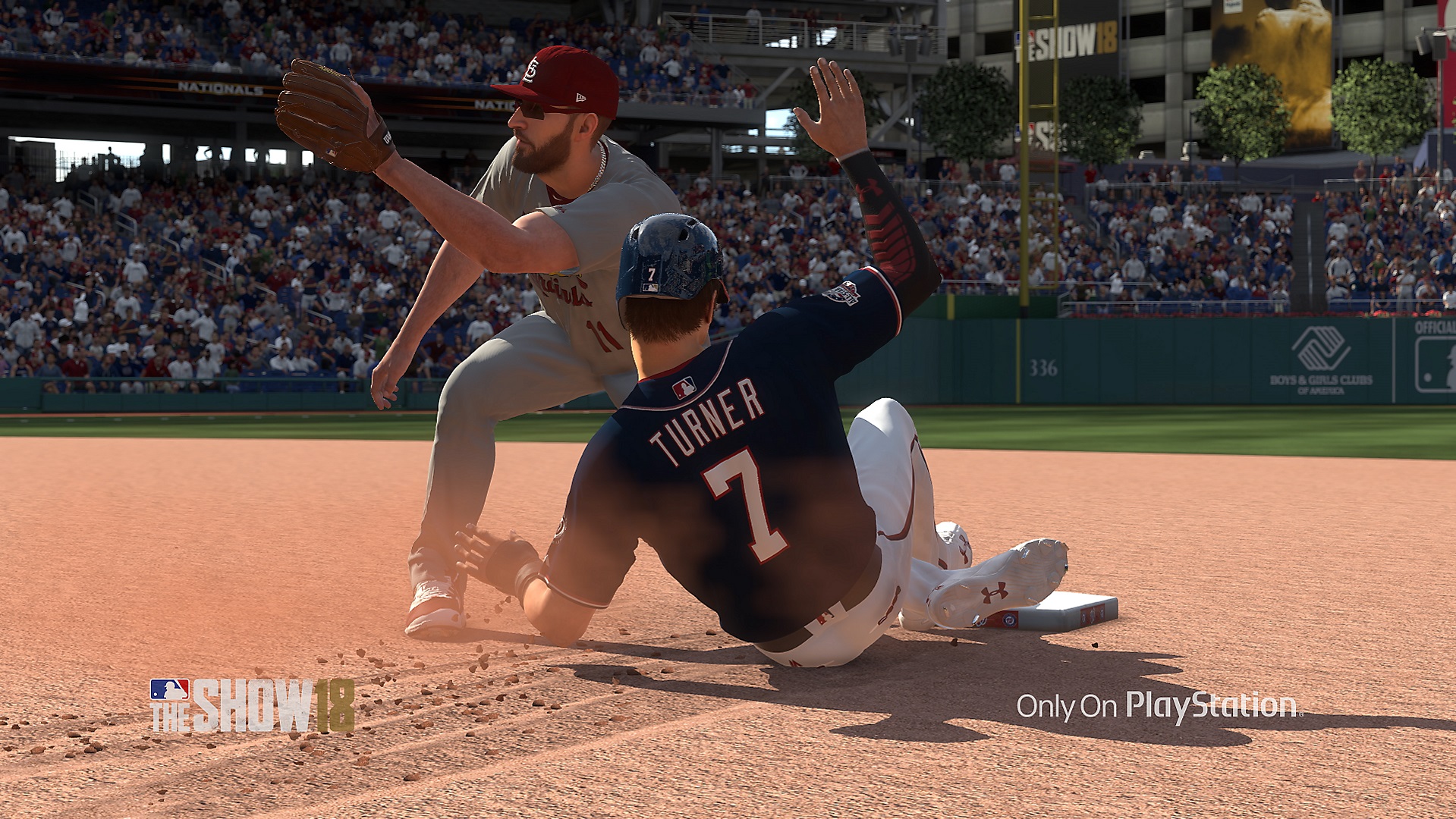 What has been removed is the heavily-played Online Franchise and the generic Season Mode. A lot of players purchased the game specifically for the Online Franchise, while others don’t want to play 162 games. Simulating doesn’t help or having reduced games. Baseball is one of the few games where playing a full game mimics full stats unlike trying to play fifteen minute quarters in Madden or twelve minute quarters in a NBA game. There have been a few things pulled out in recent years such as predicting pitches and motion controls from the PS3 days. VR baseball would be worth exploring in the future and hopefully reintroducing Online Franchise won’t be considered a “new” feature in the future.

The most nagging issue with the series has been online functionality and so far it seems like its taken a step backwards this year. Not only does playing online not offer a consistent experience due to hiccups with a sport that can’t afford hiccups, but the launch has been plagued with server issues. This can eliminate cloud saves and transactions on Diamond Dynasty. If the server is down, there are certain modes that cannot be accessed. A patch was recently released to fix the server issues but only time will tell if this has been improved. While the online gameplay isn’t nearly as bad as it was in the last generation, it’s currently serviceable at best. 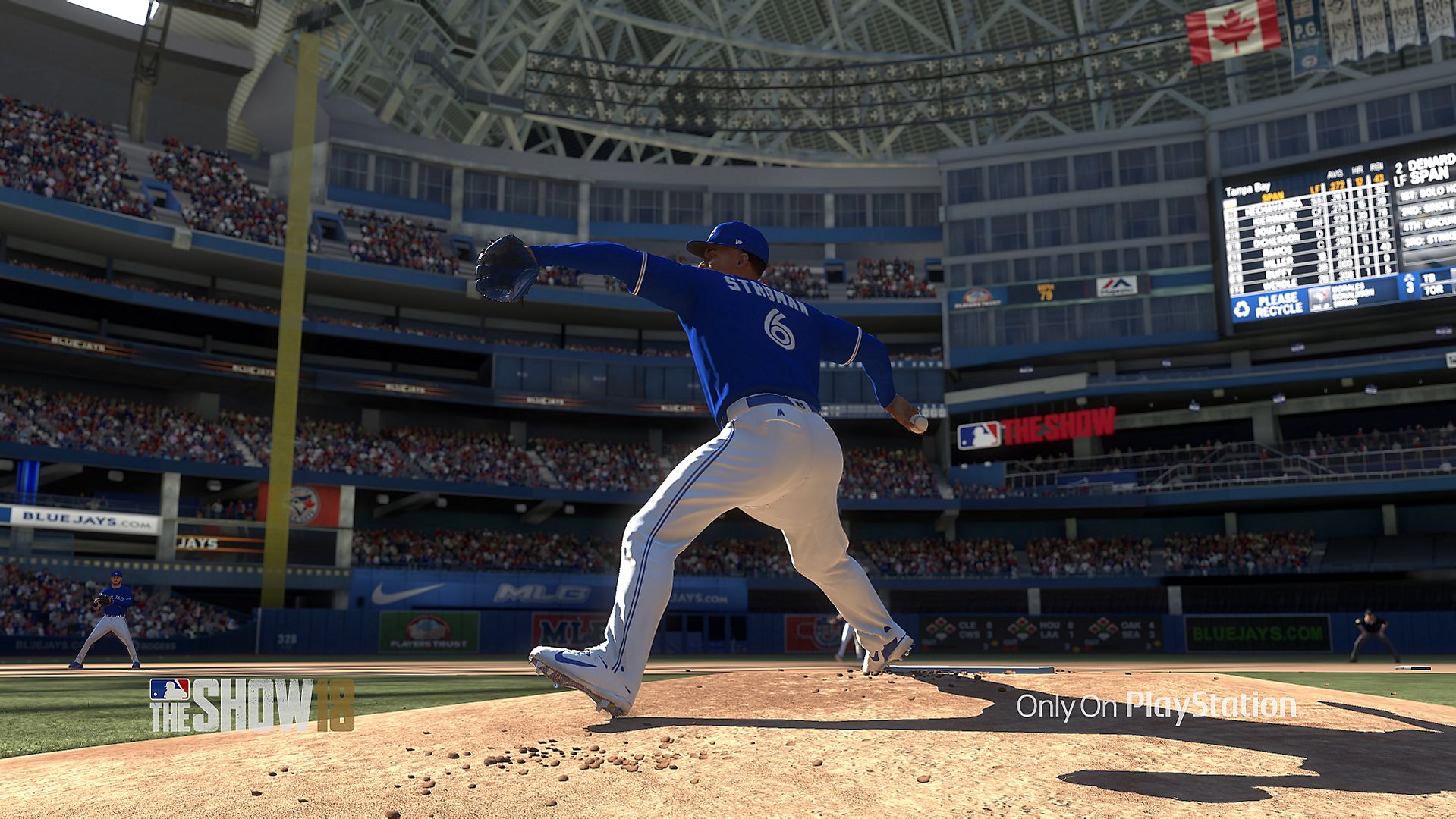 PlayStation 4 is the only place to get the best and most authentic baseball experience there is. MLB The Show 18 incorporates plenty of content to keep players busy while offering the best visuals and strongest core gameplay in a sports simulation. Franchise Mode feels more intuitive, Diamond Dynasty is loaded with Legends and many different outlets to score more cards, and Road to the Show is the best version the series has seen. The adjusted ball mechanics can be felt immediately, but there still seems to be an abundant amount of foul balls. While the lack of something revolutionary may bother yearly players, the game of baseball that The Show 18 plays will attract baseball fans.