While most indie publishers at GDC only have one or two games to show off, French-based Playdius had seven distinct titles to bring to the table. They demoed a rhythm game that fashions its worlds after classic video games called Old School Musical, gave us a taste of the Viking-centric resource survival game Dead in Vinland, let us dive into the first-person adventure/shooter/RPG/jolly title Away: Journey to the Unexpected, the Japanese-style RPG based off of classic Final Fantasy games Edge of Eternity, the spiritual successor to Jet Set Radio called Hover, the fun top-down circuit racer Brakes are for Losers and the bizarrely funny adventure game Jengo.

A constant homage to classic games, Old School Music will undoubtedly scratch that rhythm game itch and stroke player’s nostalgic tendencies every minute the game is played. The gameplay is simple: notes fly from the sides of the screen towards the center, corresponding to up, down, left or right buttons (which can also be played on the face buttons on the right half of the controller if that’s more comfortable for the player). Certain sections of songs have two sets of notes fly towards parallel lines, indicating left or right trigger inputs. Luckily, this simple layout and design feels absolutely spot on – where other rhythm games go for obtuse control schemes, this very straight-forward layout has allowed developer La Moutarde to tighten the feel of the game. If a note is missed, it’s absolutely on the player, not the game.

What really sets Old School Musical apart is its constant referential bent. Though there are dozens of original (and fantastic) songs throughout the game, each take place in certain throw-back worlds. For instance, one world is clearly modeled after classic Metal Gear games from the MSX2, another is drenched in 2D Final Fantasy goodness, there’s even a solid Pokémon world to jam your way through. Theoretical gameplay goes on in the background, and if the player doesn’t perform well enough, the avatar in that world’s game will miss a jump, or get caught by a guard, or take some damage. The enemies are often chickens, enraged at their horrible treatment in past games like The Ocarina of Time. Old School Musical includes a multiplayer mode as well, and though the same button prompts are shown on screen for both players, the game’s progression is decided on the average inputs of the players. At the end of the song, the game will tell them who performed better by which percentage of notes they hit. Old School Musical is set to come out Q2 of 2018 for the Switch and on Steam. 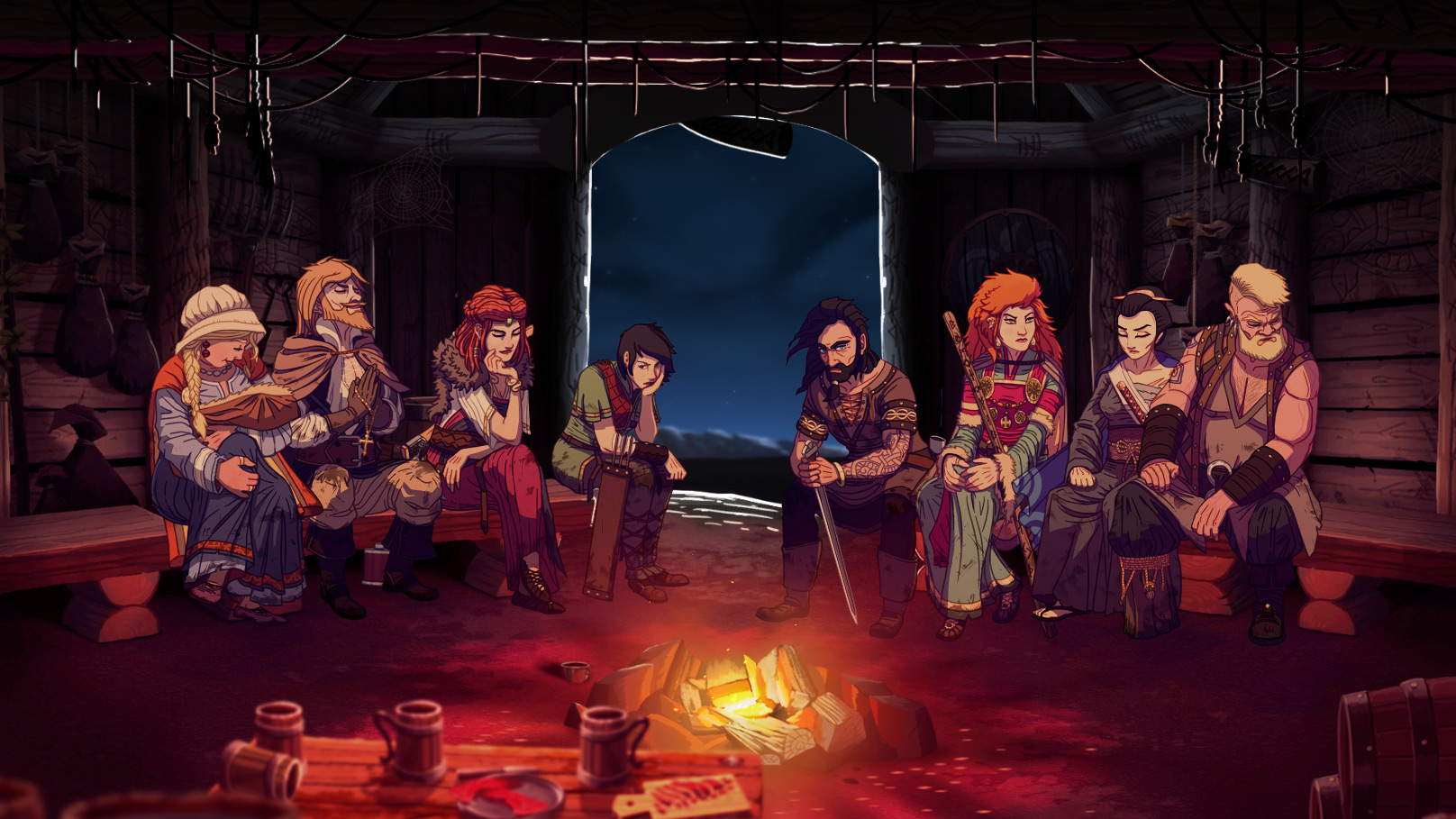 Though survival simulators feel like a dime a dozen lately, Dead in Vinland manages to feel fresh. You play as a Viking family stranded on an island. It’s your goal to keep the entire family alive by assigning each member – a father, mother, daughter and son – to certain tasks, like food gathering or crafting. Eventually, more members join this small group and a small settlement begins to form. There are various attributes that the player must keep track of and to sure they don’t overtax any character: hunger, thirst, depression and more are all things to watch out for, and if any of these attributes is maxed out, they die. If a single family member dies, it’s game over, though less important members of the group can pass away without ending the game.

The settlement has to deal with constant outside pressures, including raids that can result in injuries to specific parts of a character’s body, like a broken jaw, leg or worse. Encounters aren’t simply automated, however, and a complete row-based battle system is heavily integrated into game. Diplomacy is paramount, then, in order to avoid as many of these raids as you can. Unfortunately, almost any decision will have both positive and negative consequences. For instance, if the father decides to kill a raider instead of talk things through, his wife will commend him for his bravery, but his daughter may become enraged at his reckless behavior. Dead in Vinland is planned to release April 12 on Steam for PC and Mac at $19.99 US.

Away: Journey to the Unexpected 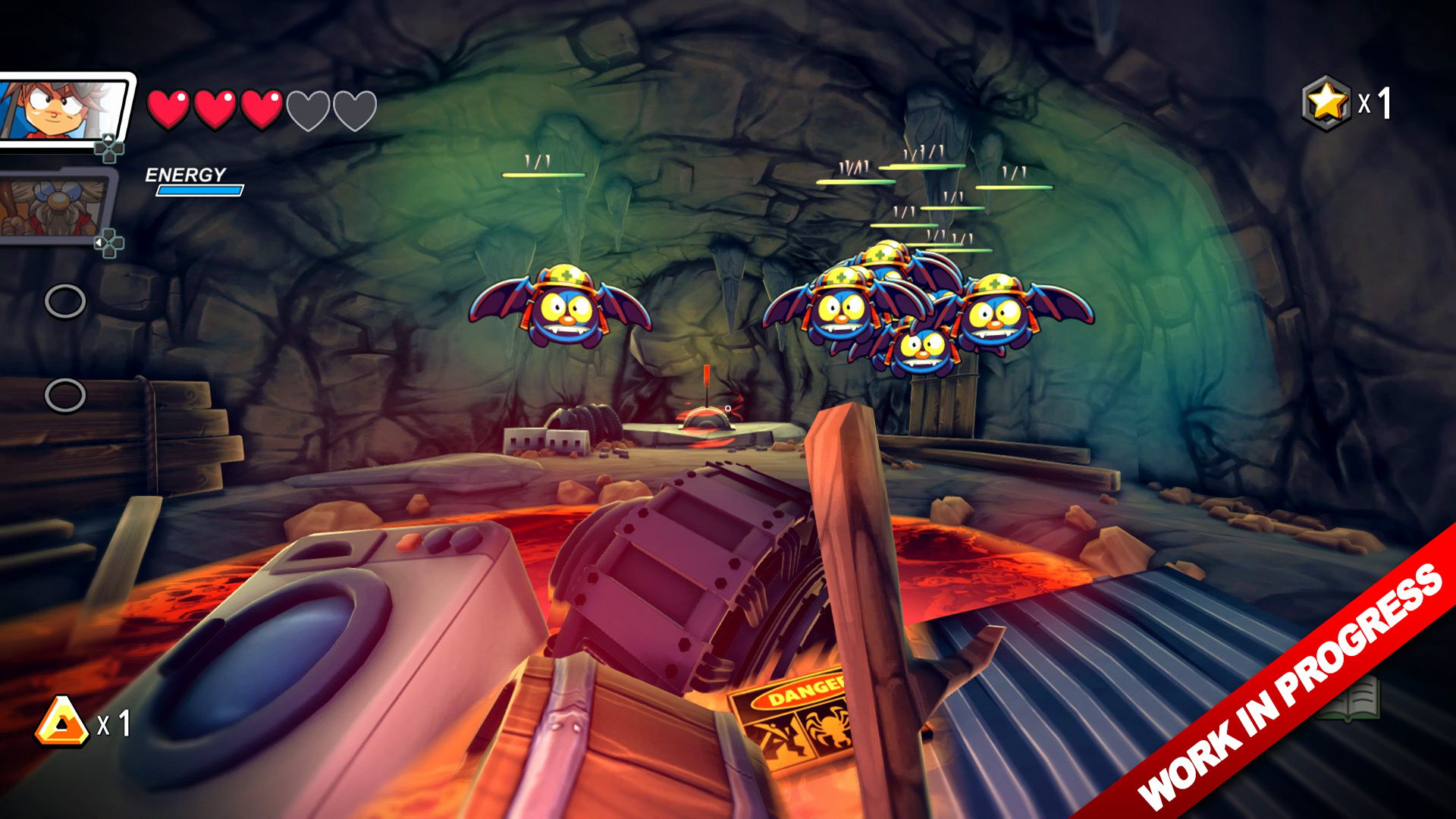 If you’ve ever wondered what old-school Dragon Quest games would be like if you actually moved around the world and manually attacked enemies in the first-person, then look no further – Away: Journey to the Unexpected is a delightful, expectation subverting first-person adventure RPG coming soon. In it, you play as a young boy being raised by his grandparents and through the various doors in their house he is transported to numerous whimsical landscapes. All movement is done the in the first person and the boy’s specialties lie in wielding a stick for melee damage, and being able to run fast and jump far at will.

This boy soon befriends various characters in this unexpected journey and each can be taken control of by the player in turn. A mutated tree that we befriended after a couple of minutes is capable of deploying floating mine-like plants for enemies to run into and his vision is blurred and sepia-tinted, mimicking what the developers imagined looking through the eyes of a tree would be like. We’ve been told other companions are similarly game-changing.  Away: Journey to the Unexpected feels like there’s a lot of mystery left to discover, and it’s coming to PC and Switch later this year. 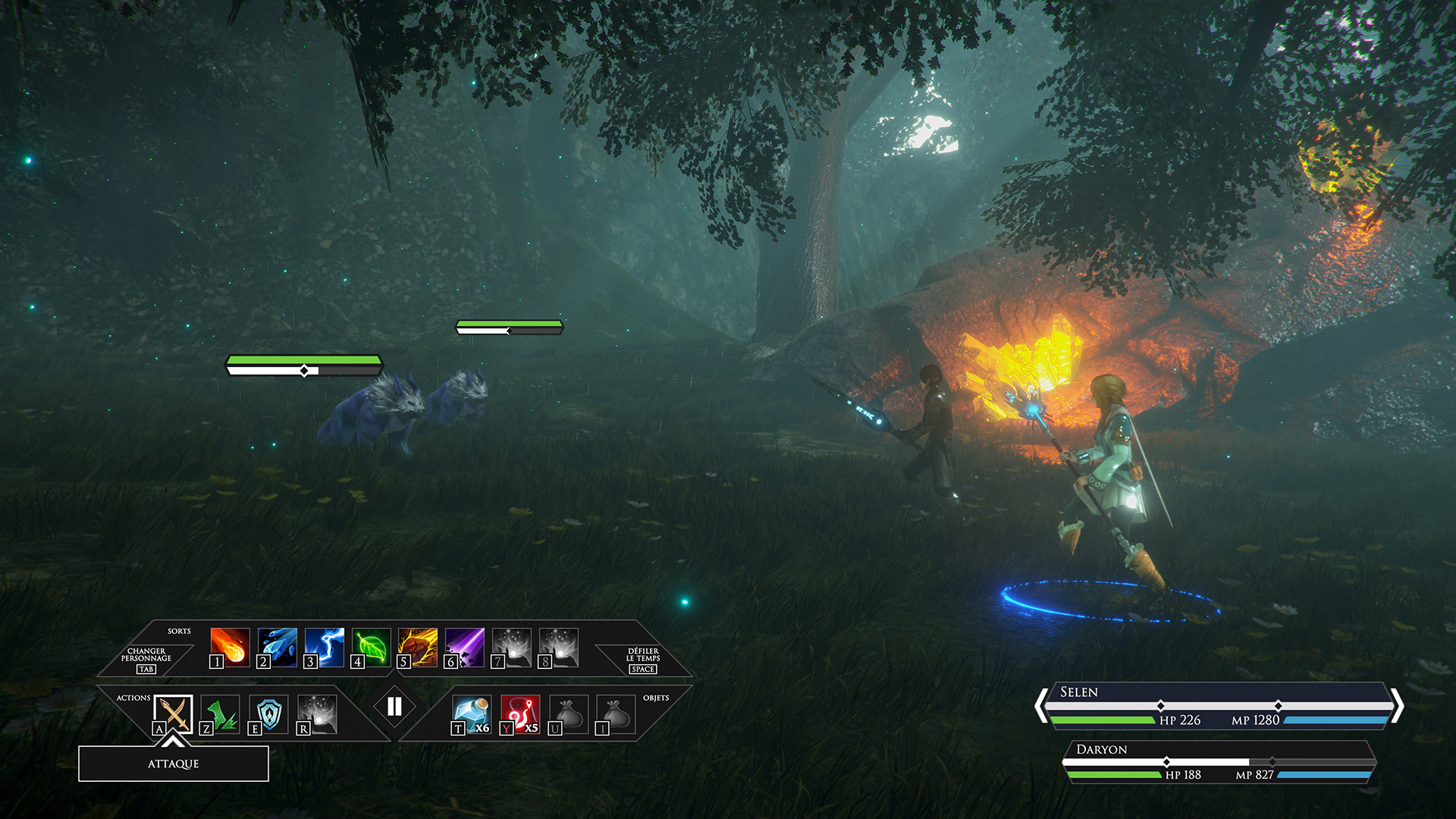 Any sort of RPG is difficult to demo in a brief period and Edge of Eternity unfortunately doesn’t buck that trend. Envisioned as a parallel to classic 3D Final Fantasy games, Edge of Eternity simply doesn’t measure up. In the five minutes or so of the game we played through, character movement felt stiff and the turn-based combat felt exceptionally bland and devoid of personality. The growth system of the game focuses more on weapon upgrading than traditional leveling up, and it could prove to be an interesting wrinkle in this game come its release on Steam, Xbox One and PlayStation 4 sometime later this year. 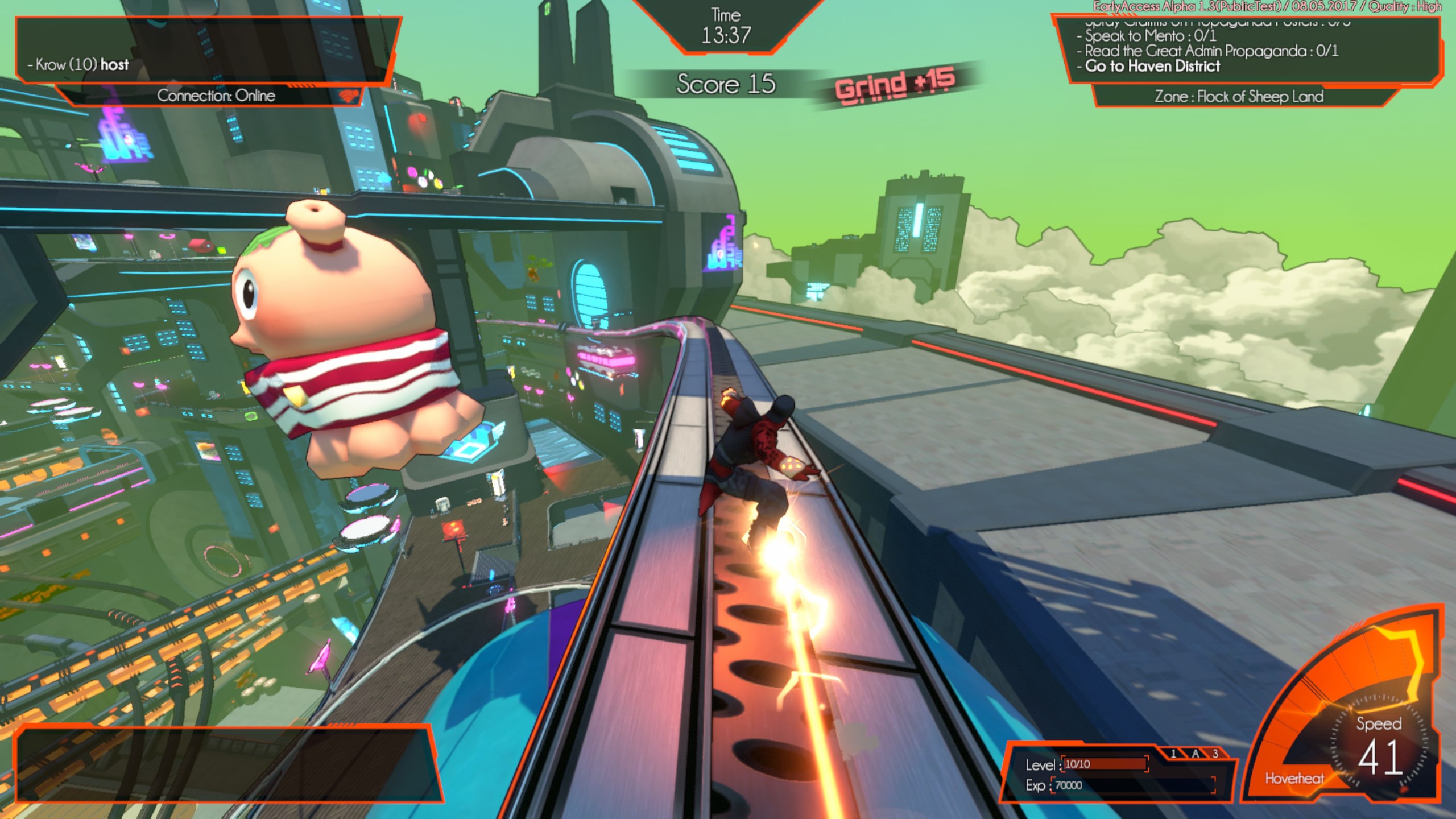 Painted as a bit of a spiritual successor to the Dreamcast classic Jet Set Radio, Hover involves playing alone or with friends across the internet while running, jumping, grinding and more through a highly-modernized city with a stylish art style that will bring memories of the early 2000s rushing back. Various missions can be taken on alone or with friends and can be picked up from various NPCs scattered across the city. Hover is already available for PC and Mac on Steam for $19.99 and is coming to the Xbox One and PlayStation 4 later this year.

Brakes are for Losers 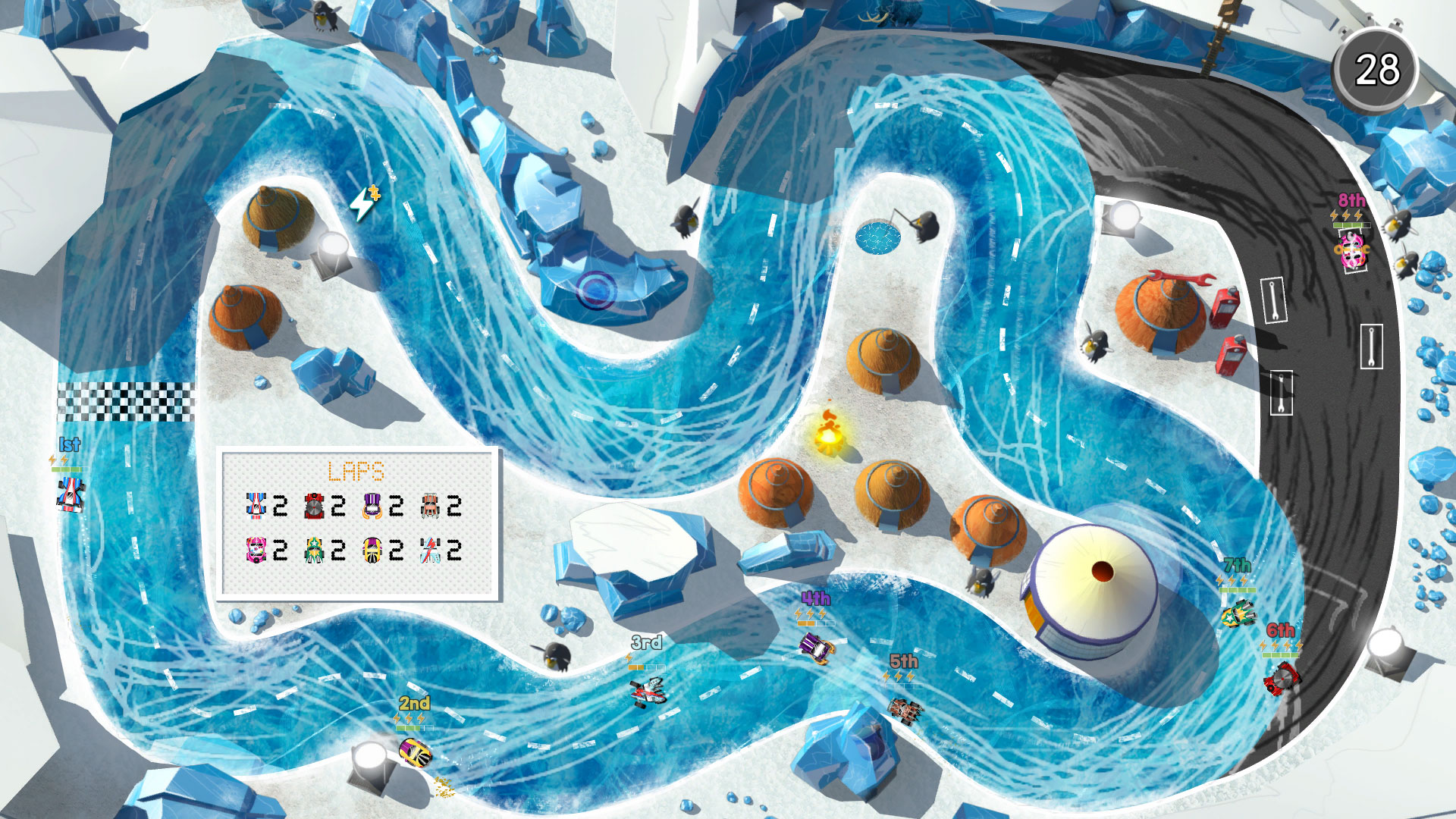 Though we didn’t get a chance to go hands on with Brakes are for Losers, we did get to see a bit of gameplay. It’s a multiplayer, top-down circuit racer that has cars zip around tight loops over and over again in quick, playful rounds. It can be played with up to eight players at a time. It’s available now on Steam for PC and is coming to the Switch soon.

Another game we only saw a trailer of, Jengo looks to have some promise as an oddball point-and-click adventure game. Its focus on out-of-left-field humor looks to be its strength, and in many ways is reminiscent of Tim Schafer’s classic adventure games. Check out the Fig pitch video above to give a better feel for what the game’s going for.