Board games being converted to video games isn’t exactly a new idea, but thanks to this newfangled VR technology, this can be done in a way where it actually feels like it’s still a board game. Catan VR was announced a few months ago, which seemed interesting enough since The Settlers Catan had already enjoyed a successful conversion to a digital format, but all we had to go off at that time was a launch trailer, which doesn’t do the VR experience justice. VR games have come a long way in the past couple years and are just now starting to hit their stride and they seem like an ideal platform for a tabletop video game as the medium is able to combine the best of both worlds.

The Settlers of Catan is a German board game developed in 1995. The oversimplified description is that it is a game designed for two to four players who are trying to establish colonies on the island of Catan. Players use resources such as lumber, grain, ore, brick and sheep to build settlements and roads. Roads are used to connect settlements and settlements can be upgraded to cities. Players can trade the resources they have with other players to purchase roads or settlements, or trade them with the store for a specific item card if they can afford the brutal exchange rate. The robber is a useful item that will prevent a hex area from generating a resource and strategic placement of that can work to a player’s advantage. 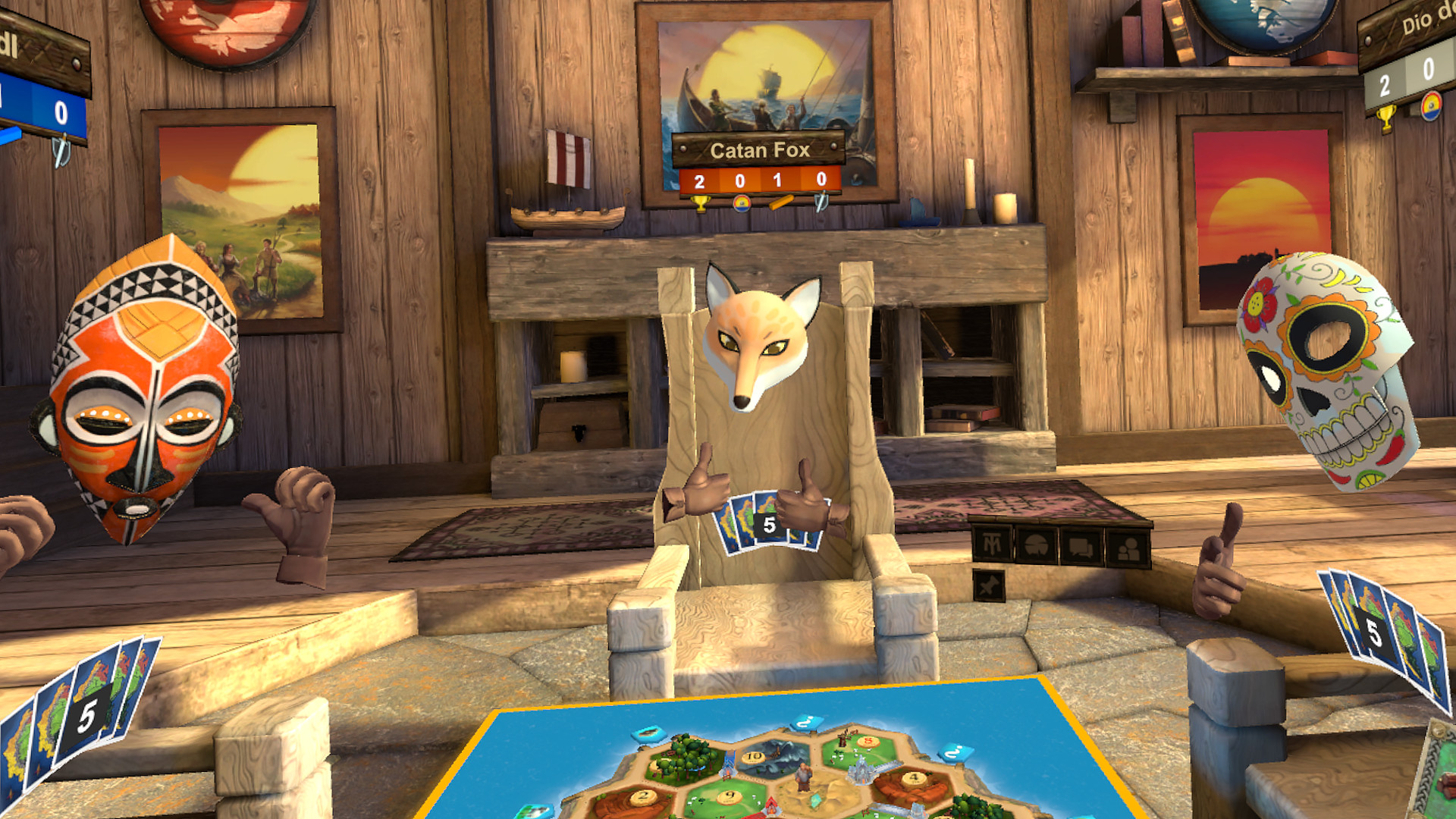 When it’s the player’s turn, they roll the dice and if they have settlements adjacent to the hexagon whose number matches the roll, they collect the resource from that area, provided the robber isn’t placed on top of it. The first player to get to ten points wins. Having a settlement will get the player one point and having a city is worth two points. Certain other conditions can also grant points and there is more to the game than this paragraph but that’s the general idea.

During the demo session I played against one other person and two AI opponents, whose AI behaviors are based on actual Catan players. The AI players had character portraits to represent them so it was like having a cartoon character sitting at the table. The other human player was sitting to the side, who happened to be wearing a cat mask but his face and arms moved like a person, so it sort of felt like he was sitting at the table with me. Interacting with portraits and a disembodied cat mask was a tad surreal, but honestly the game and interactive portion of it was quite enjoyable. Games of Catan typically can last a couple hours and Catan VR is streamlined to the point where offering card trades or making purchases is expedited so the players can just focus on playing the game and having fun. 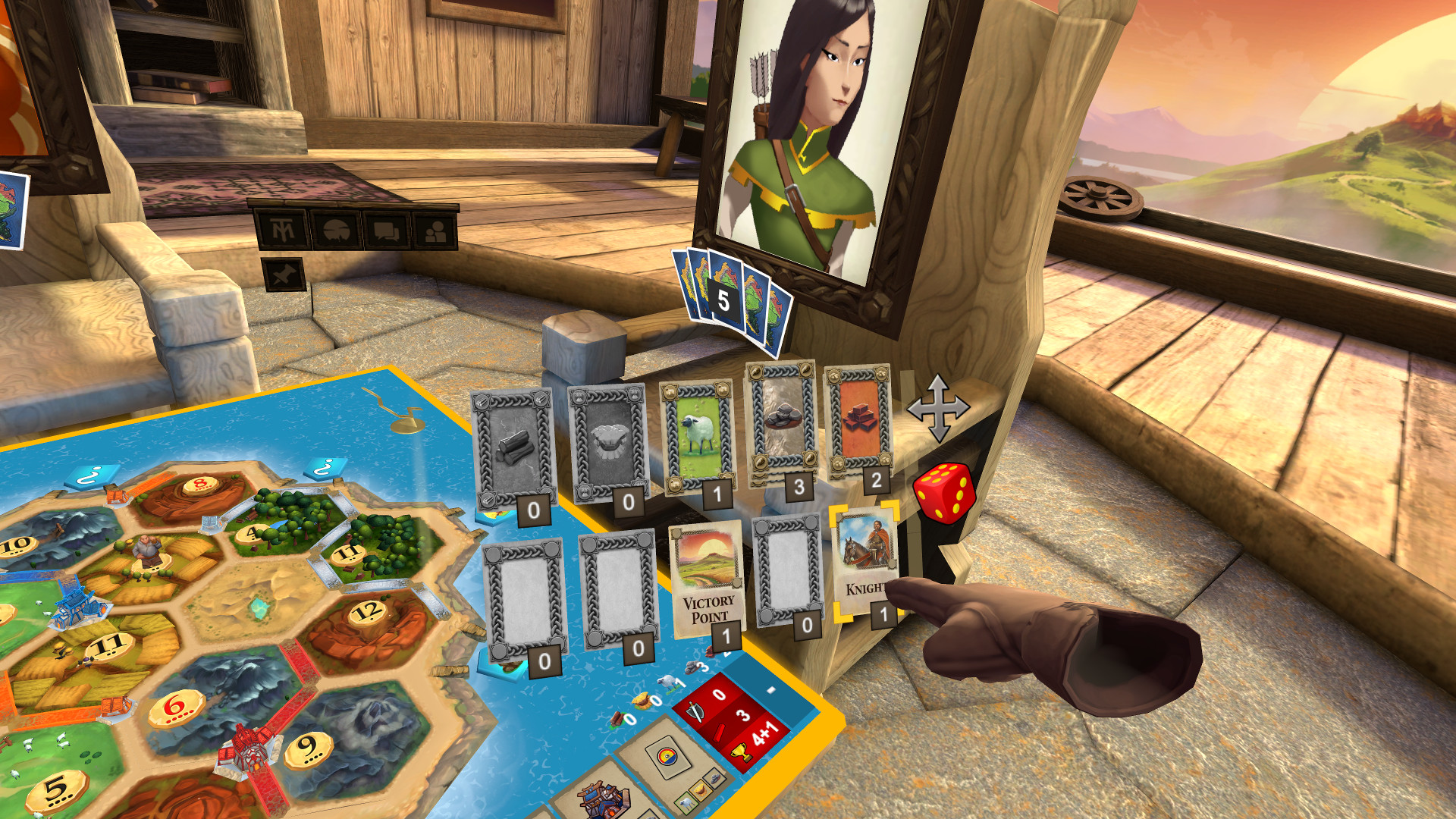 Catan VR takes an enjoyable tabletop game and converts it to a video game form that replicates the joy of playing the physical game. This is an ideal game for people who enjoy tabletop games but suffer from the common condition of their close friends and family members being scattered across the world where game night isn’t as convenient as it used to be. The space within the VR headset created the illusion of four friends sitting at a table in a Viking lodge, with the game board in the center of the table with the dice and cards at the player’s side. The game mechanics do an impressive job of replicating the feel of actually playing a tabletop game. No video game can currently replace engaging in an activity with friends in person, but Catan VR shows what the next best thing can look like, and the cross-platform playability makes it more accessible. Catan VR is published by Asmodee Digital and is available now for the Oculus Rift and Gear VR with plans to appear on other VR platforms in the near future.