Not too long Hardcore Gamer came down from the cross to take our first naked stroll through the unforgivably hot and sandy desert in Conan Exiles. Last September this survival action game set in the world of Conan the Barbarian wasn’t in a state where it could be considered great by any measuring standard. Given that it was in Early Access at the time and obviously a work in progress we could look past all its shortcomings and see the potential was there to develop into something great. Its release date is drawing ever closer, but we are pleased to see that progress in the right direction has been made.

Conan Exiles does not have the player control Conan. Instead they design their own individual character choosing their own race, religion and gender with virtually unfettered freedom in selecting their physical attributes. The player is crucified and left to die in the desert until someone who may resemble a long-haired 34-year-old Arnold Schwarzenegger cuts them down to freedom and gives them their life back. After that they are freed in the truest sense of the word, where they go out in the world to crush their enemies, see them driven before them and hear the lamentations of their women; that is after they’ve hopefully procured a pair of pants. 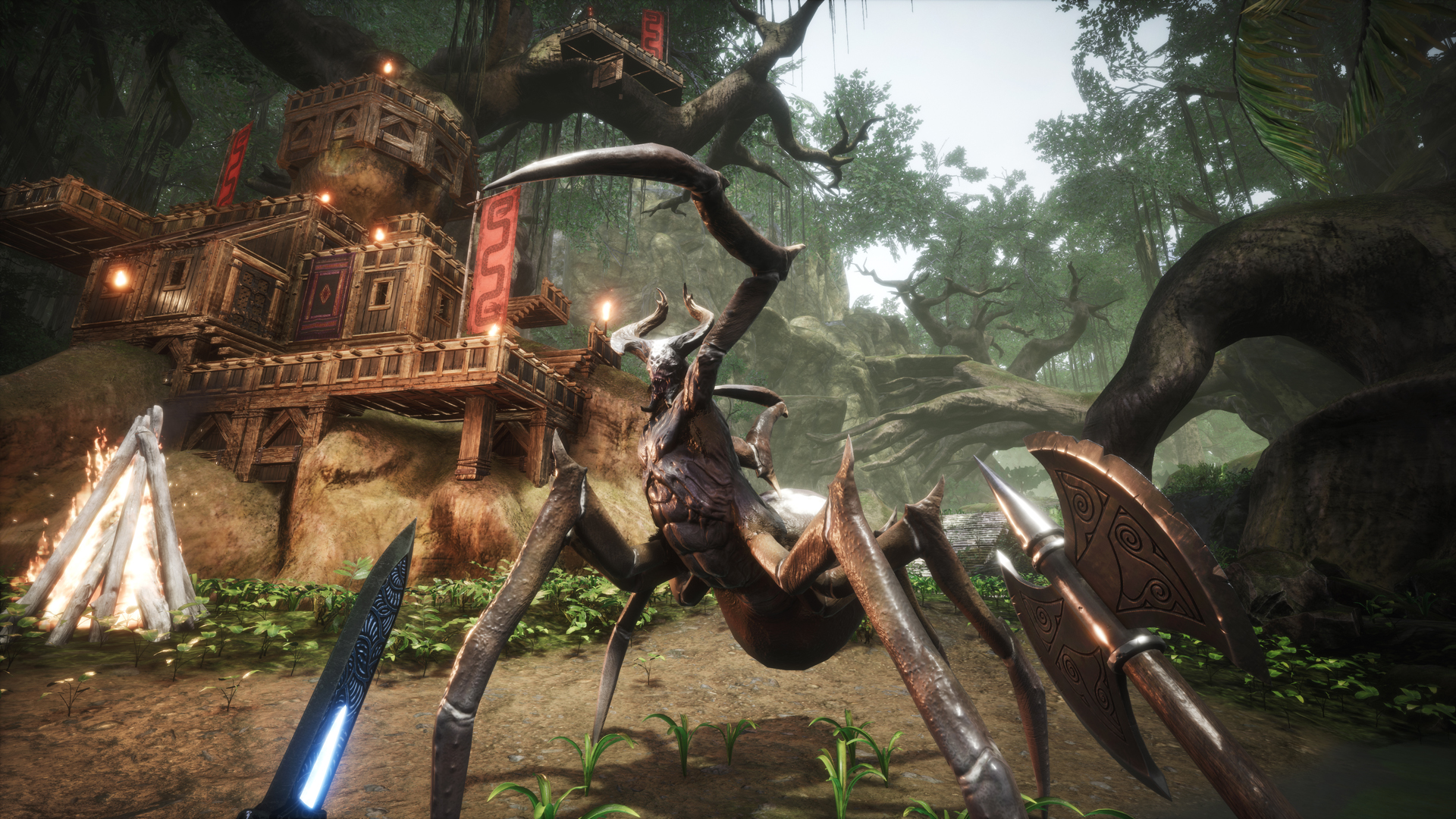 Conan Exiles is actually much more than just going out into the world and slaughtering one’s enemies. As a survival game, the player will need to collect resources to build their own shelter, generate a source of food, clothe and arm themselves and generally make sure they are protected from the elements. Since our initial taste of Conan Exiles, the options for creating the player’s domicile have increased substantially. Players will be able to choose from different clothing and equipment styles that are patterned after the Hyborian Age equivalent of real world history cultures, such as ancient Rome and Egypt. This multicultural aspect carries over to building equipment so the player could choose their favorite applicable historical period and pattern their stronghold after that or go with some sort of Frankenfortress hodgepodge of various elements.

While there is a lot more to Conan Exiles than just combat, combat is a crucial part of the world of Conan the Barbarian and an aspect in the Early Access build that needed improvement. From what we’ve seen it looks like combat is headed into a direction that is fit for barbarian warfare. Equipped weapons and armor factor into how a player will move on the battlefield. Heavy armor will limit a character’s movement and make dodging more ineffective, but will allow the player to take a beating. Likewise, like armor will let the player nimbly flip out of harm’s way, but let’s hope that giant warhammer doesn’t catch them. Players will have regular and heavy attacks that can be chained together in combos, and naturally fighting with two daggers will behave differently than when swinging a seven foot two-handed sword. Combat controls do feel tighter in the updated build. 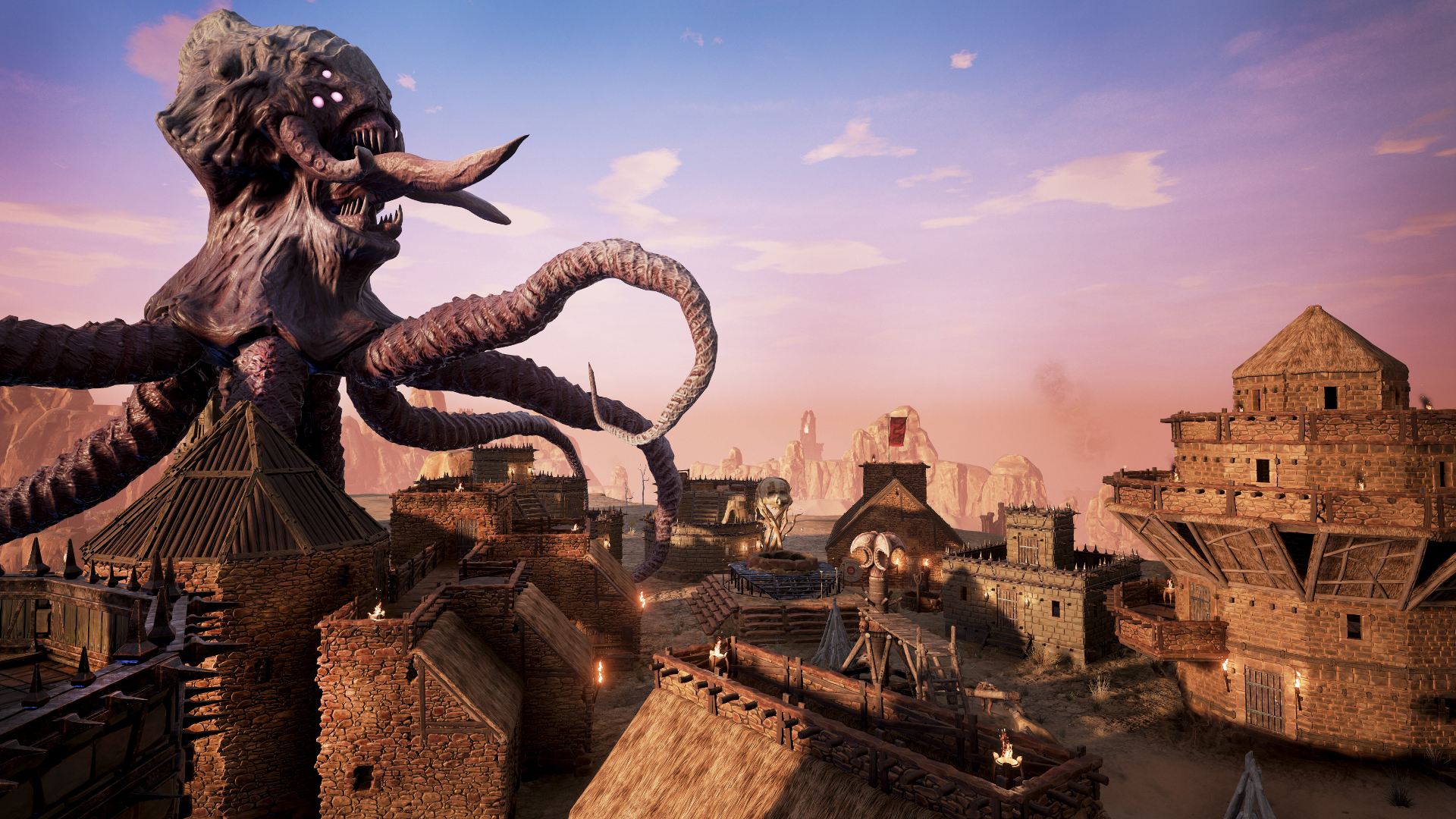 Conan Exiles begins players in the desert but there are different environments to visit, such as the snow-covered north along with jungles and forests. In addition to other players and humans, mythical creatures and monsters also pose a threat, some of which are of gargantuan proportions. In addition to improving the combat mechanics and adding more crafting options, the RPG elements of Conan Exiles have been fleshed out with being able to customize the character’s attributes, traits and abilities. It’s not quite ready for a full assessment yet, but it’s come a long way in the six months since we first took a look at it. The finalized Conan Exiles is scheduled for a May 8 release for PlayStation 4, PC and Xbox One and an incomplete build currently is available on Steam Early Access and Xbox One Game Preview.