The Bard’s Tale was a once popular series of PC games that vanished after the ’80s ended. There was The Bard’s Tale Construction Set in 1991 that was basically an early RPG Maker using the engine from the Bard’s Tale games and there was the 2004 isometric action RPG The Bard’s Tale, but there hasn’t been a proper Bard’s Tale since 1988. That changes with The Bard’s Tale IV: Barrows Deep. This is a return to Skara Brae as a dungeon crawler in the larger world of Caith. Set 100 years after the events of The Bards’ Tale III: Thief of Fate, so slightly longer than the time lapse between releases, this new entry is a return to form with a modern makeover, promising to enchant new and returning fans alike.

Like most adventures, The Bard’s Tale IV: Barrows Deep begins as a solo outing, but soon new companions will be recruited to become a formidable dungeon-crawling party. As the player levels up they will be able to customize their party members’ abilities and equipment as they delve through dungeons filled with numerous traps and mysterious puzzles. The journey will take the party to many unique locations, such as the lowlands of Baedish, the island of Einarr and the Forests of the Fichti. 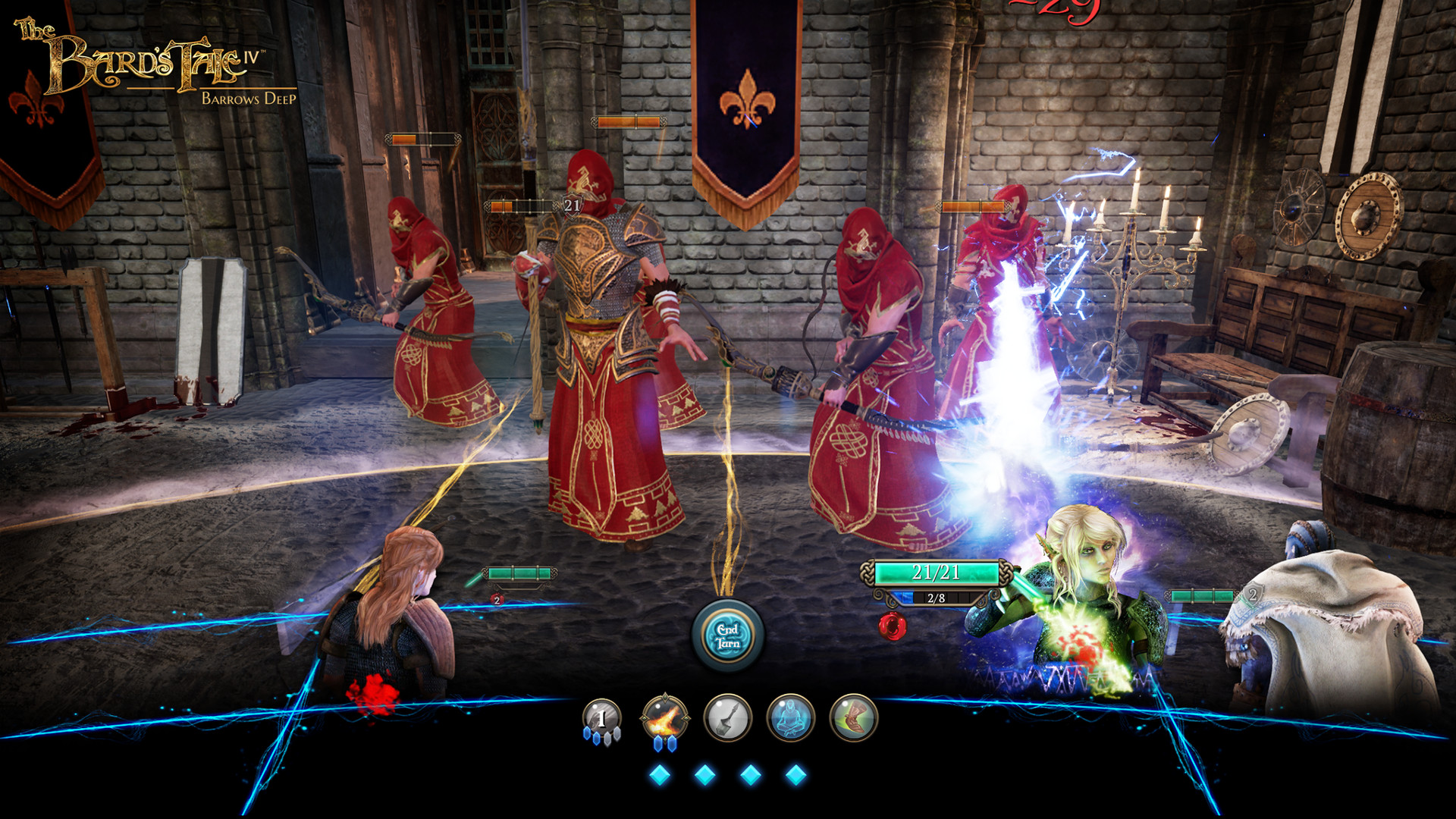 The Bard’s Tale IV: Barrows Deep plays like a regular first-person dungeon crawler. During our time with the demo a few puzzles were discovered while exploring the dungeon we were in. The solutions were not necessarily obvious at first glance, but they were easy to figure out after examining nearby clues. Combat is turn based and fought over a grid, so player positioning factors into what abilities they should use and what their viable targets are. Area of effects and damage over time were things to take into consideration, but there were other factors as well such as a character who unlocked more powerful abilities if they happened to imbibe alcohol during one of their turns. It’s called The Bard’s Tale; what kind of bard wouldn’t have some element of drunken merriment?

Our time with The Bard’s Tale IV: Barrows Deep was woefully short, but the game presented itself as a charming and somewhat humorous affair in that amount of time. The strategy necessary for victory in battle presented a level of challenge where the player needs to put some thought into what they are going to do for each character’s turn, but not merciless if they aren’t a brilliant tactician, so basically they found the happy medium between boring and frustrating. It looks and feels like a modern dungeon crawler, but also maintains the charm and overall essence of the older titles. The Gaelic music provided by Ged Grimes of Simple Minds contributed to creating a unique in game atmosphere for this title and the legendary Gaelic folk singers employed helped bring the Bard’s songs and melodies to life, which naturally will have some effect on gameplay. 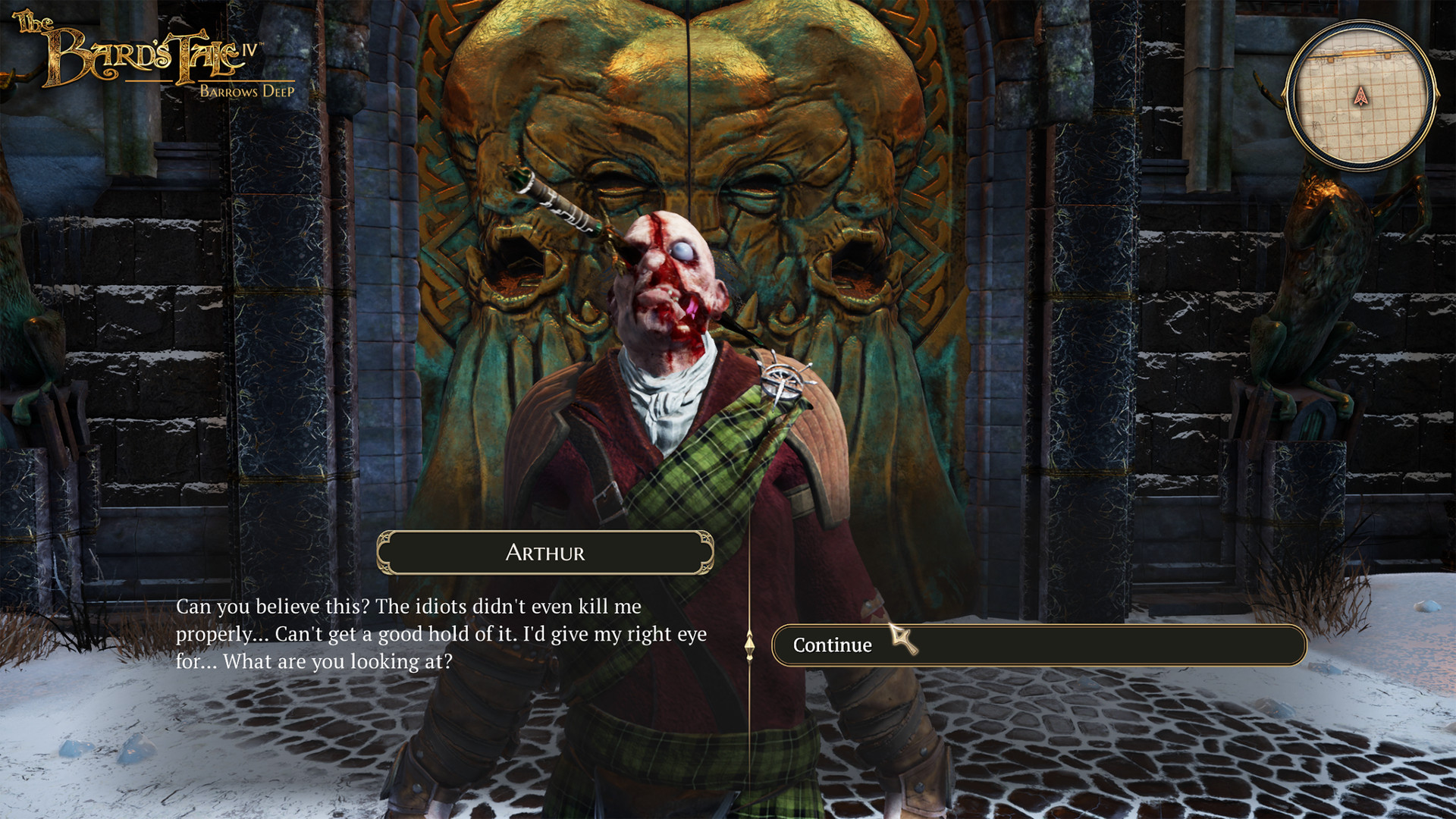 The Bard’s Tale IV: Barrows Deep is designed to scratch that old school, dungeon-crawling RPG itch. While there are several nods to the previous entries in the series and this is meant to appeal to fans of The Bard’s Tale, it’s standalone title that is meant to be enjoyed by all RPG fans with no prior experience with the Bard required. There is no release date set outside of sometime in 2018, but it can be pre-ordered from Steam. It’s hard to form a definitive opinion on a game based on a brief work-in-progress demo, but from what we’ve seen this has potential to be a welcome return for the franchise.