The early ’90s were an incredible time for Sega and fans of comic books as well. Beyond the former getting into a war with Nintendo and winning for a bit and the giant comic boom, fans of one could wind up as fans of the other thanks to high-quality games being crafted using comic licenses. Sega had Spider-Man while arcade-goers has the outstanding X-Men brawler and their own well-made Spider-Man game. Sega had never given Batman a go (outside of a legally-different character appearing in the original version of Revenge of Shinobi), and with this also being an era of each company wanting exclusive versions of games whenever, it led to each console having games with the same name hand-crafted to showcase the different hardware.

When it came to Batman: The Animated Series, its rechristening as the Adventures of Batman and Robin hurt its momentum, but not its quality. The SNES version was created by Konami and used a side-scrolling platformer motif with light puzzle-solving thanks to item selections and didn’t incorporate Robin much. Sega on the other hand, opted to use Clockwork Tortoise and wanted to show off its faster hardware. While “blast processing” was a gimmick, the Genesis was a faster system by default — even if titles like Super Turrican, Hagane and Rendering Ranger showed that the SNES was technically capable of doing fast-paced games. The Genesis became known as a system where sports games thrived due to speed, while shooters of all kinds generally received less slowdown and faster overall action. 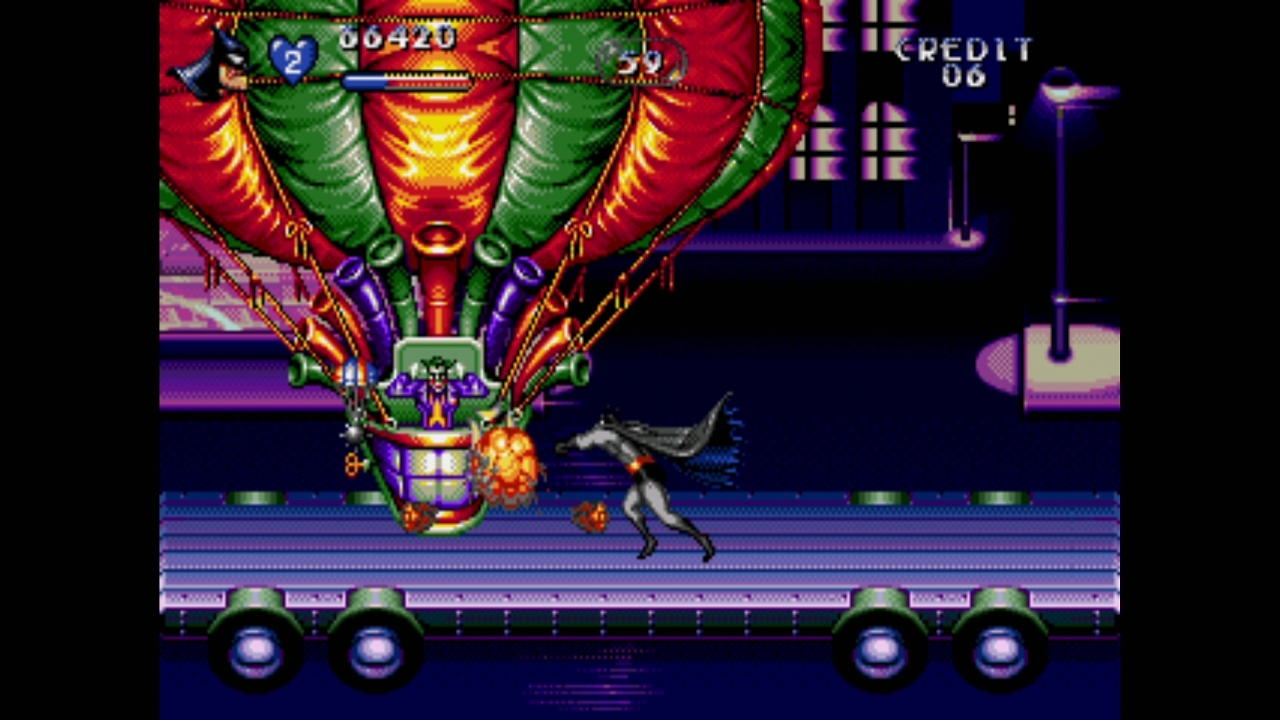 Clockwork Tortoise was commissioned to create an all-action Batman adventure and did just that. While the game stars Batman and Robin and features a handful of their rogue’s gallery, it feels far more like a Contra game than anything else. It takes time to get used to and doesn’t play like one would expect a Batman game to play, but it’s mostly a blast. You have a variety of weapons to use, with a fast but weak weapon, a larger but shorter-range weapon and one that’s essentially right in the middle. Much like a horizontal or vertical shooter, they can be upgraded with like-colored power-ups as well and grabbing another one switches your loadout up.

As Batman, Robin or both you can demolish swarms of enemies in fairly short order in a wave-based assault. Each stage has the goons and environments wrapped up in a theme that fits the main villain of the stage fairly well — with the opening Joker level featuring some silly props and even an early gaming appearance of Harley Quinn. The game is a technical showcase for the Genesis and features a surprising amount of graphical effects that are rarely seen on the console. Early on you face a group of flashlight-wielding enemies and all of the flashlights emit their own light source in the night-time stage. It’s a small detail, but it makes the in-game world seem that much more realistic. No matter if the enemy is up or knocked out, the light continues from the flashlight and it’s clear that a great deal of thought was put into every small detail. 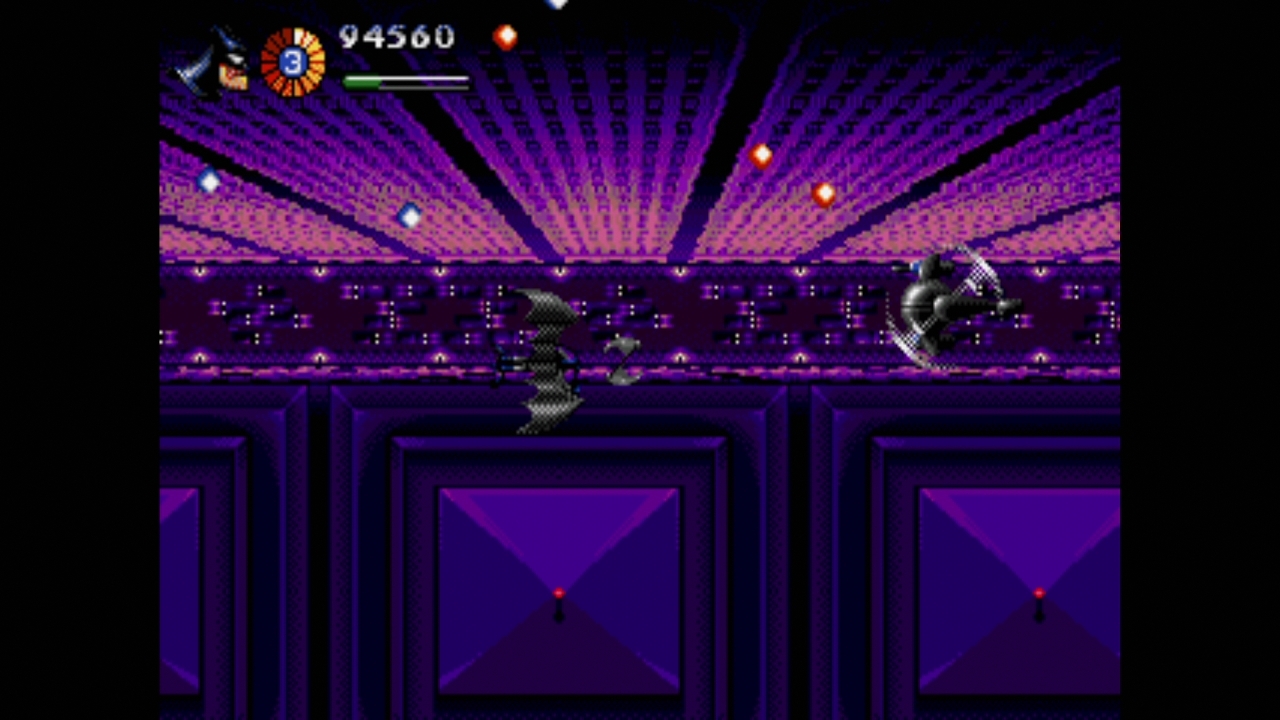 This continues with things like the wide variety of shooting stages offered up. This trend begins with a side-scrolling shooter with Batman in a presumably rocket-powered glider and in theory is a lot like R-Type. It pits you against another set of enemy swarms, and while Batman’s sprite does take up a lot of space, so do the enemies. The real key here is that not only is all of it slowdown-free, but you’re soaring over the city. While every building looks the same beneath you, they all have a surprising amount of depth to them. They also have varying amounts of light, with the bottom portions being more well-lit due to street lights and vehicle lights, while the roofs that you’re soaring above feature minimal lighting and appear darker. Tiny cars also dot the streets and add to the living, breathing city.

The frantic pace is reminiscent of Alien Soldier, although the pacing here is far more laborious. That was largely a boss rush game with a bit of filler between the bosses, while this game does feature tons of filler sections and generally feels a bit over-long at times. Stage two features an extended elevator area that could easily accomplish the same goal of “beat the exact same group of enemies” in 1/4 the time, while the shooting sequence features the same backgrounds over and over and just swaps new enemies in occasionally. This leads to the game not lending itself well to extended play sessions due to that, but also being something where you want to at least beat a stage to make it worth your while. 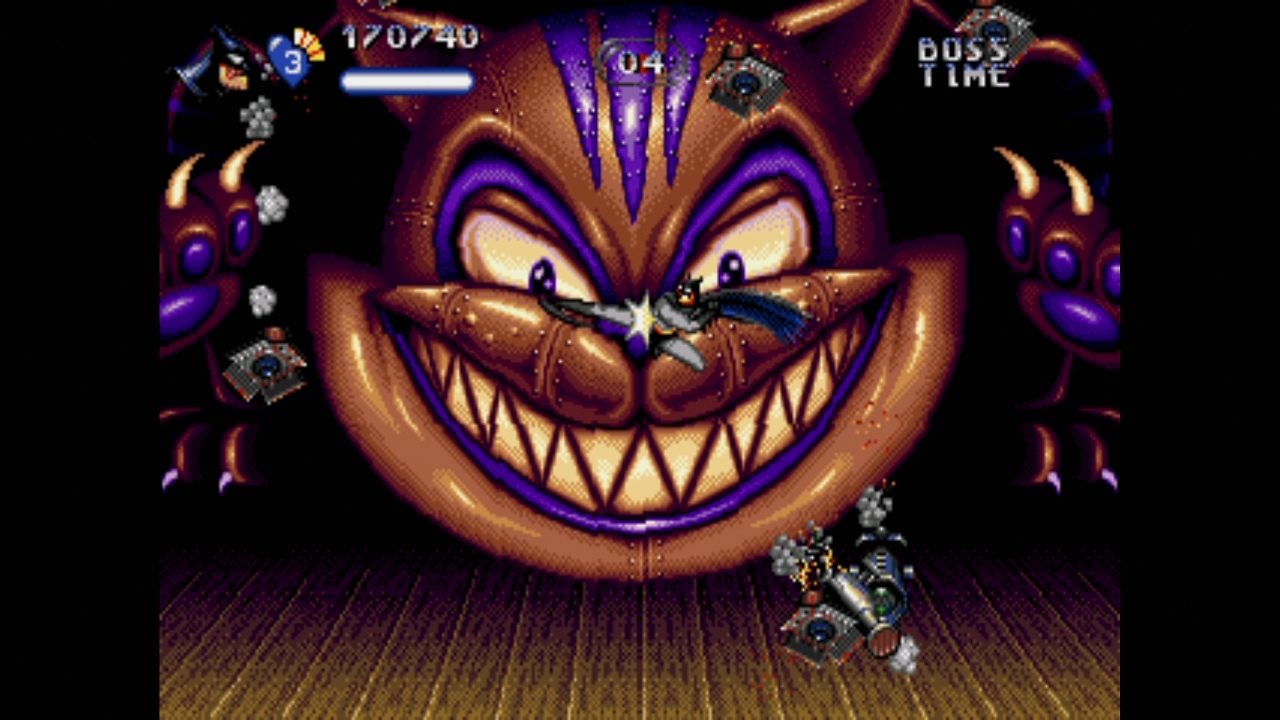 Fortunately, while the stages themselves can drag on, the boss battles are usually worth it. The Mad Hatter’s stage is easily a highlight with the Cheshire Cat and its devilish grin filling the screen and offering up a bit of nightmare fuel at the same time. It’s a tough battle, but sets the stage for one of the most bizarre battles in a 16-bit game — one against a giant lumberjack-esque toy that hops around on a single leg. The battle with the Mad Hatter itself is another bright spot as it pits you against him on a red and white checkboard stage with his vistage on it while playing cards of the hatter’s face littering your path as you try to defeat the hatter inside a giant hat.

Batman and Robin is a visual feast for the eyes thanks to all of its graphical trickery and it holds up quite well over twenty years later. Some parts of the presentation do stick out as a bit flawed like the fairly small character models, but those also allow for more things to be on-screen at once even if they can make the action harder to follow. Most of the effects look solid today, and while something like minor lighting from a flashlight may not be impressive now, it does impress given the hardware it’s on. 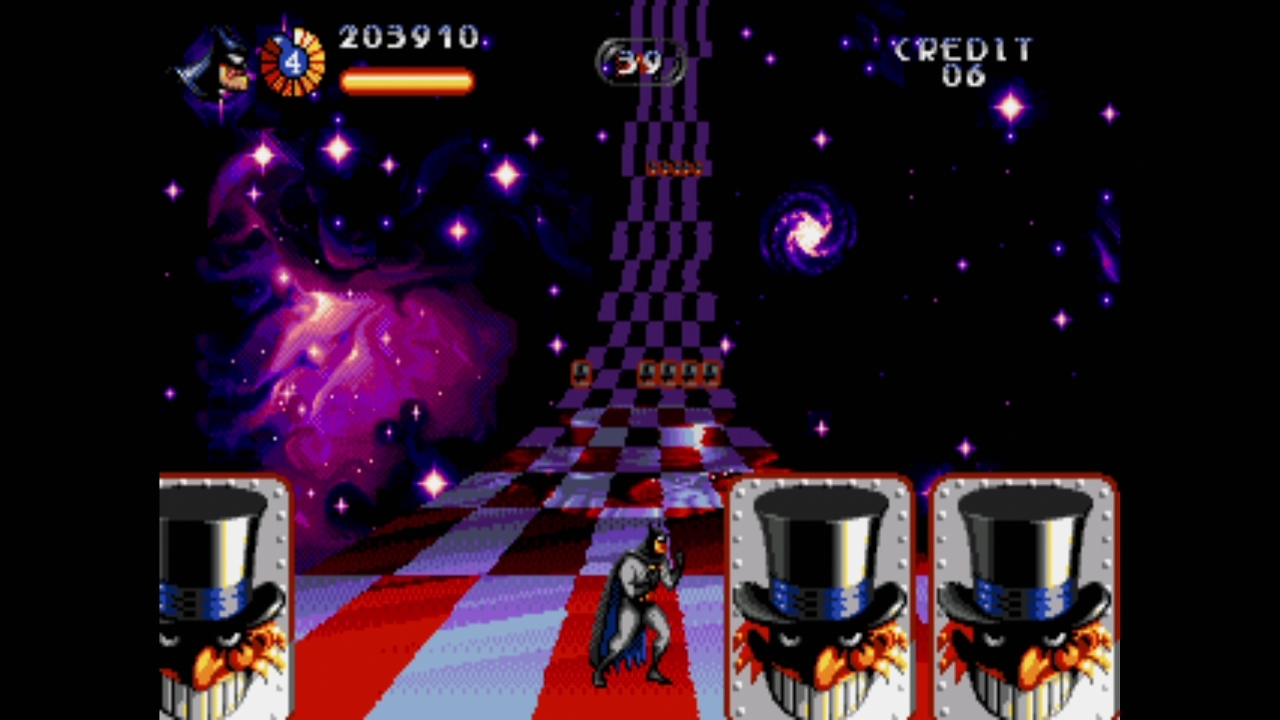 The soundtrack is completely unlike anything a Batman game had before or after. Instead of the dark orchestra music from the Tim Burton films and animated series, this Genesis adventure features a dark electronic score. Jesper Kyd composed the music and it feels aggressive. Everything has a grinding sound to it and it’s harsh on the ears, but in a good way. It’s something that you gain a greater appreciation for outside of the game and then go back to hearing it with a new set of ears during another play session.

This incarnation of Batman can be yours for around twenty dollars now which isn’t too bad given how much of a showcase it is for the Genesis’s hardware. It’s a great fit for the console and works well during marathon play sessions of Contra: Hard Corps or Alien Soldier. It’s a shame that licensing will likely prevent this from ever being given a release on a retro compilation, but you can enjoy it with relative ease with an HD-capable clone console now. 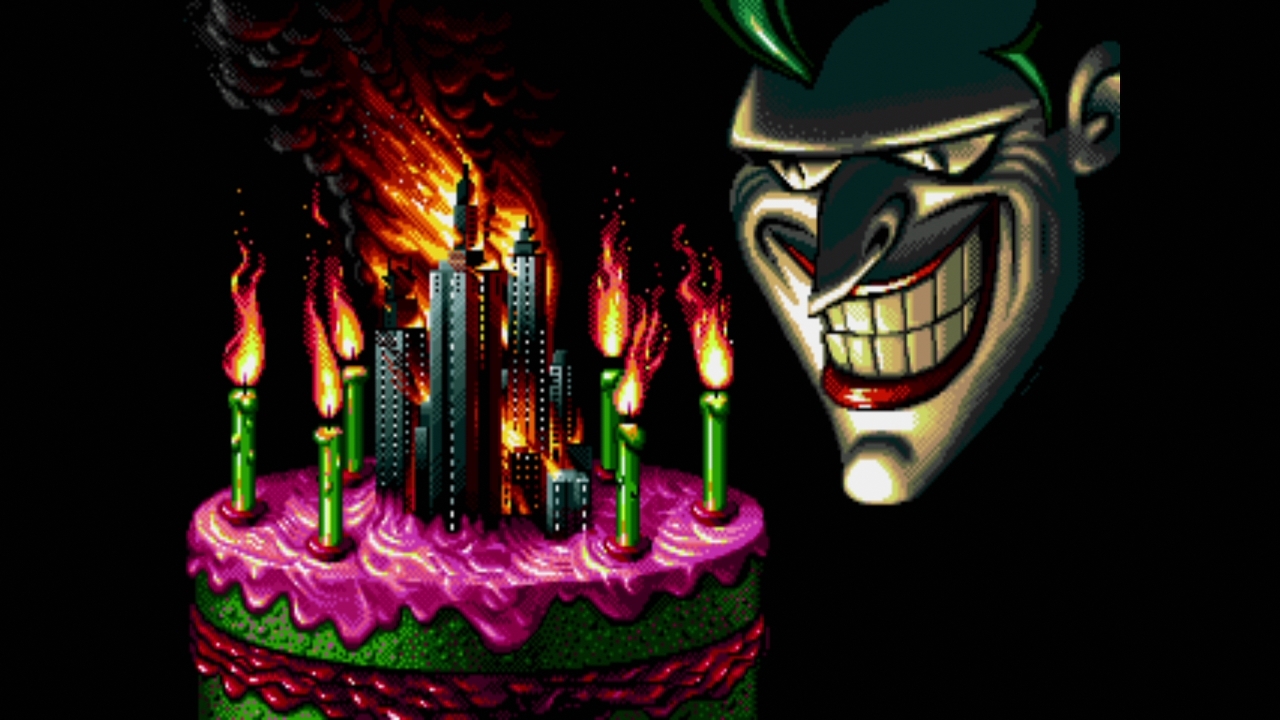