As previously detailed, Yakuza 6 cares not for how out of left field or bizarre its vast trove of mini-games might feel amidst the crime-infested streets of Japan. Yet as it turns out, it’s quickly become one of the series’ biggest accomplishments — alongside the superb writing and enjoyable combat-centric gameplay coming as standard. But if the vast array of concepts, as much entirely different genres, leaves many a pleasant first impression, it’s the addictive nature of some of these that heralds The Song of Life as but one more entry in the series you can be sure will have significant longevity. Perhaps even, deadly levels of addiction. Thus, whether you’re in it for the surrealism, the self-masochism or (preferably) a bit of splendor along the way, here are seven deadly, but delightful, mini-games we’re convinced you should check out. Just try not to break either your controller or your TV in the process. 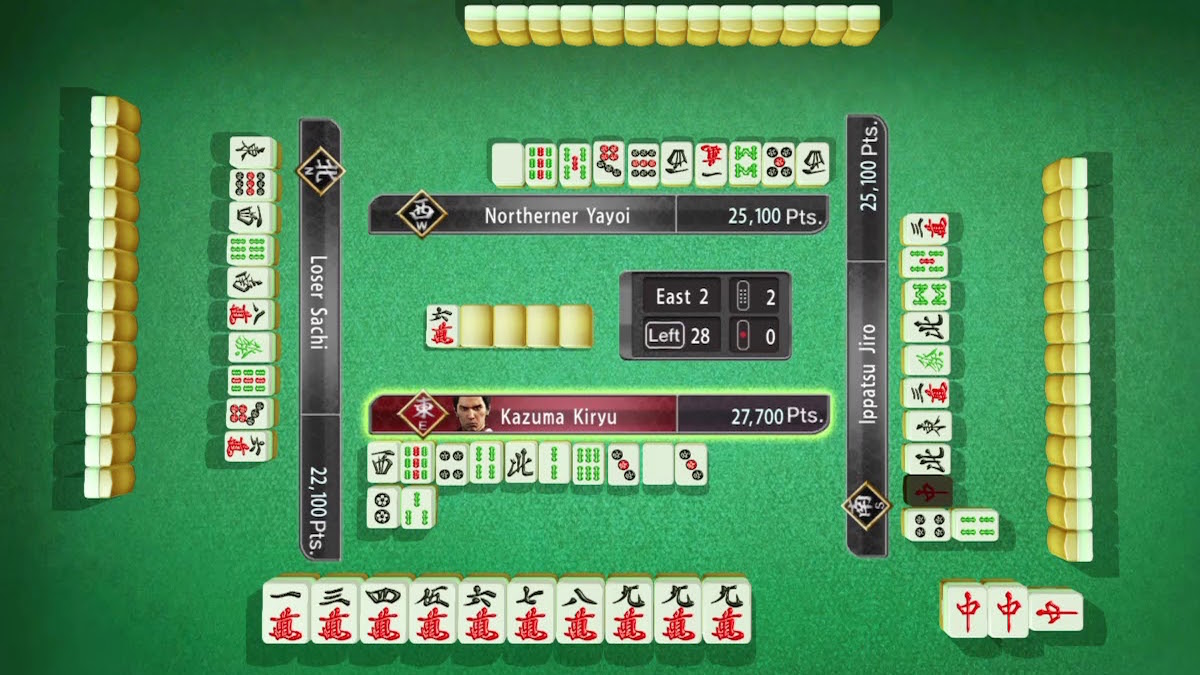 At the risk of filibustering — the in-game tutorial is fourteen pages long after all — let’s just say Mahjong is a game of the mind, rather than the body. The basic concept around this most traditional (if a little mind-numbing) of Asian tile-based games being that your objective is to accumulate as many group of threes as possible, so as to end a round with the best possible hand of thirteen tiles. Though not the easiest game to grasp at the first attempt — with different categories and suits of tile to consider and remember — players will slowly-but-surely come to grasp the mind-game mentality of Mahjong and how, like Poker, it’s not a case of playing your own hand, but instead attempting to “play” the hand of your opponents.

A mixture of strategy, timing, deception and perhaps a little bit of luck, Yakuza 6’s simplistic interface and presentation lobs the tension back into the player’s head. Before long, you’ll be hoping above all hope that you don’t end up seeing Kiryu’s defeated animation yet again — one that’s greyscale in color and leaves our protagonist utterly dejected, like he’s just lost the will to live. A game that will often land you a “so close, yet so far” conclusion, Mahjong’s rather minimal display is far more complex than its many painted tiles would have you believe. 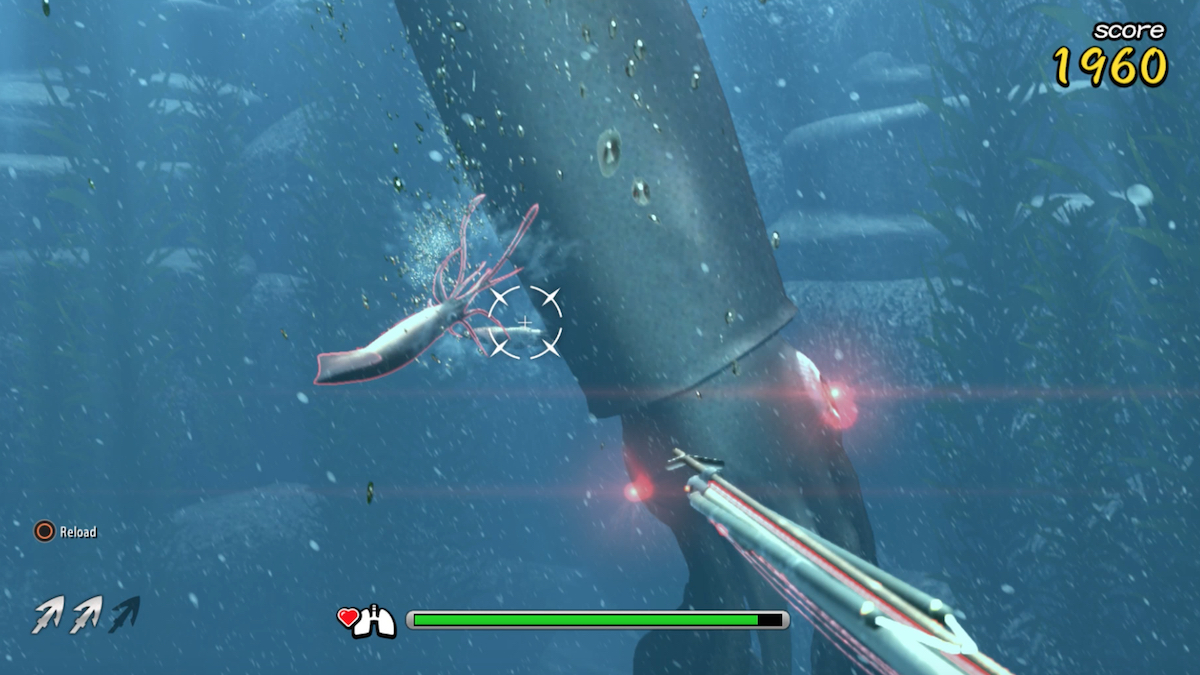 Other games might settle with simply standing by the lake’s edge, waiting for fish to take the bait, but Yakuza it seems isn’t settled with letting those of us play the waiting game. Instead, Yakuza 6’s fishing efforts take a bit more of an on-rails approach, with Kiryu swimming up and through Onomichi’s underwater reaches, picking off fish and squid and even sharks alike with the aiming reticle and one’s trustee spear gun. But things are fortunately a bit more strategic than simply spamming spears through the water.

For one, certain guns vary based on their sized slots as well as the strength of the spears they house. And while players must be careful to be constantly reloading their weapon manually — so as to avoid the automatic reloading animation taking up more considerable time — they must also be aware of some rather more antagonistic marine creatures that will hurl themselves at you and cause slight loss to your oxygen meter. And as you might expect, levels end by facing up against a monstrous variant on creatures like the squid where attacking its weak point (for massive damage) is of course, critical. You could have simply sat by the water’s edge and waited, but Yakuza has other ideas when it comes to wrestling with fish. 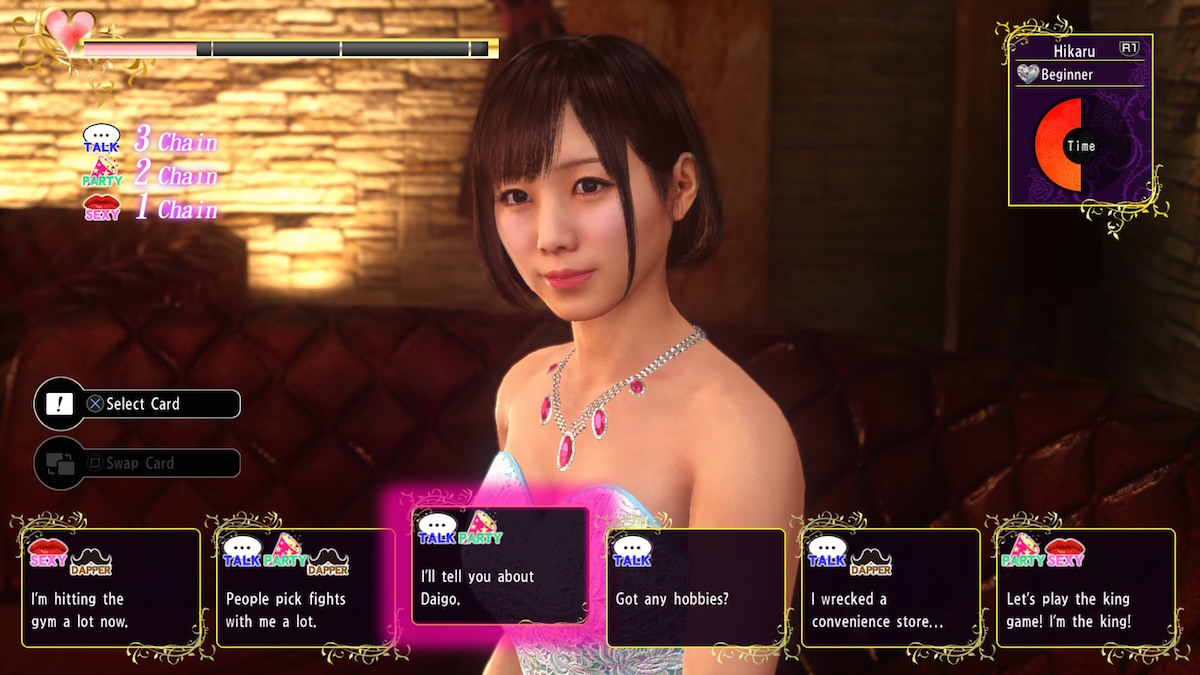 The Hostess Club could very well have been mere flattery and bordering-on-fan service for the masses, but thankfully, Yakuza 6 finds a way to integrate a bit more of a gameplay aspect into one of Kamurocho’s popular evening affairs. Tasked with ensuring Kiryu gets to know more of the girls on offer, players must decide from a selection of response cards as to how the conversation progresses within a limited time. Each of these cards increases the count of a particular topic trait which can then be added to with additional cards. Of course, while it’s beneficial to rack up points so as to max out that bar during a conversation, part of the game’s replay value, not to mention how cleverly strategic it can be, is in getting to know each of these girls personally. Deducing correctly what they like and even love will mean your conversation can go a lot smoother and your relationship status can increase.

With other mechanics such as the ability to order food/drink, knowing when best to play these cards is part of the hidden charm to Yakuza’s Hostess Club and one you’ll easily be coming back to, more so for the gameplay than anything else. And as much as they might offer a gracious and respectful bow to denote one’s time is up, no doubt you’ll be hurling cries of “mate…go away, I’ve almost got this!” towards the waiter, which you can extend a certain number of times for an additional fee. There are only a fixed number of correct routes to achieve maximum “friendliness” with each of the hostesses, but needless to say that for something as simple as a conversation, Yakuza 6 finds a way to pressure you even more into making the right decision. 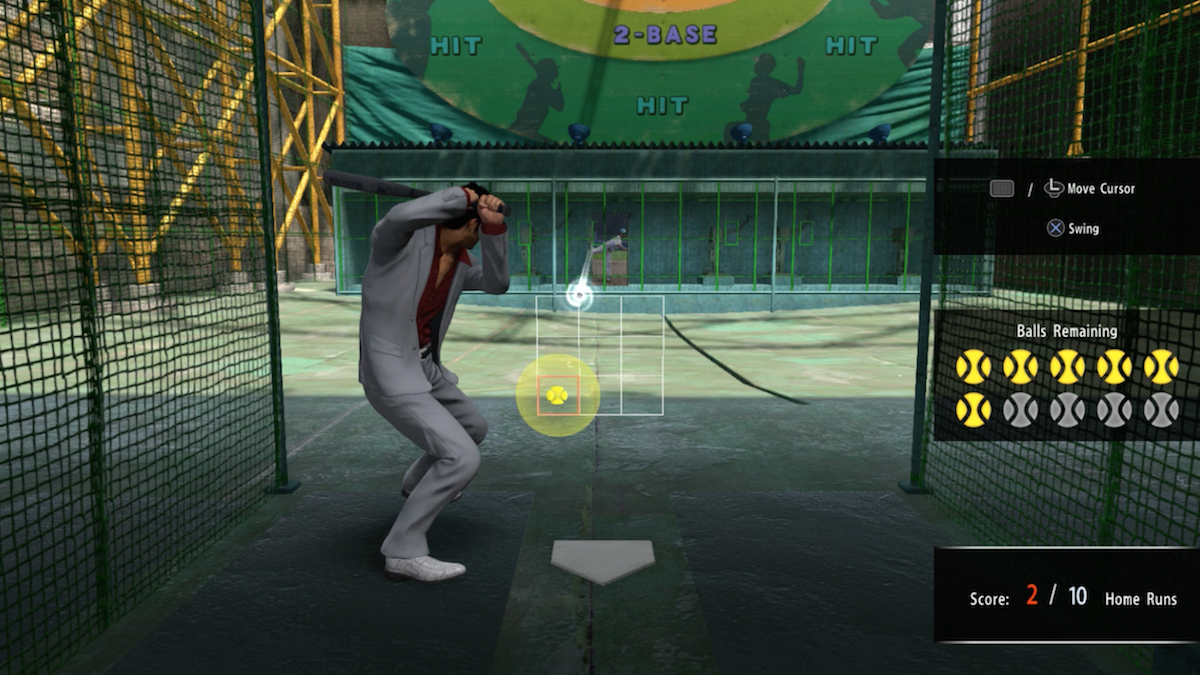 If you’re looking for a mini-game that can satisfy the self-masochist in you best of all (or should that be worst of all?), the batting fields located at the most northern reach of Kamurocho is all you’ll ever need. While its increasing difficulty levels — which must be completed and have its target objectives met if you want to progress — fortunately teach you all the different pitching techniques and manner of ball movement, don’t be surprised if you find yourself telling the game to go have intimate times with itself, to word it in a more gentlemanlike manner.

There are two modes on offer here. Home Run, which as its title suggests, requires you to hit a set number of Home Run’s to succeed. And then there’s Challenge, which is a bit more lenient in that you’re required to have as many figurative runners reach home base after the tenth ball thrown. Even so, the pitcher is no less forgiving whichever mode you pick and like so many other mini-games dotted about the game world, it’s a guarantee you’ll be coming back time after time — certain you can snatch that one last crucial home run and rub the AI pitcher’s nose in it. 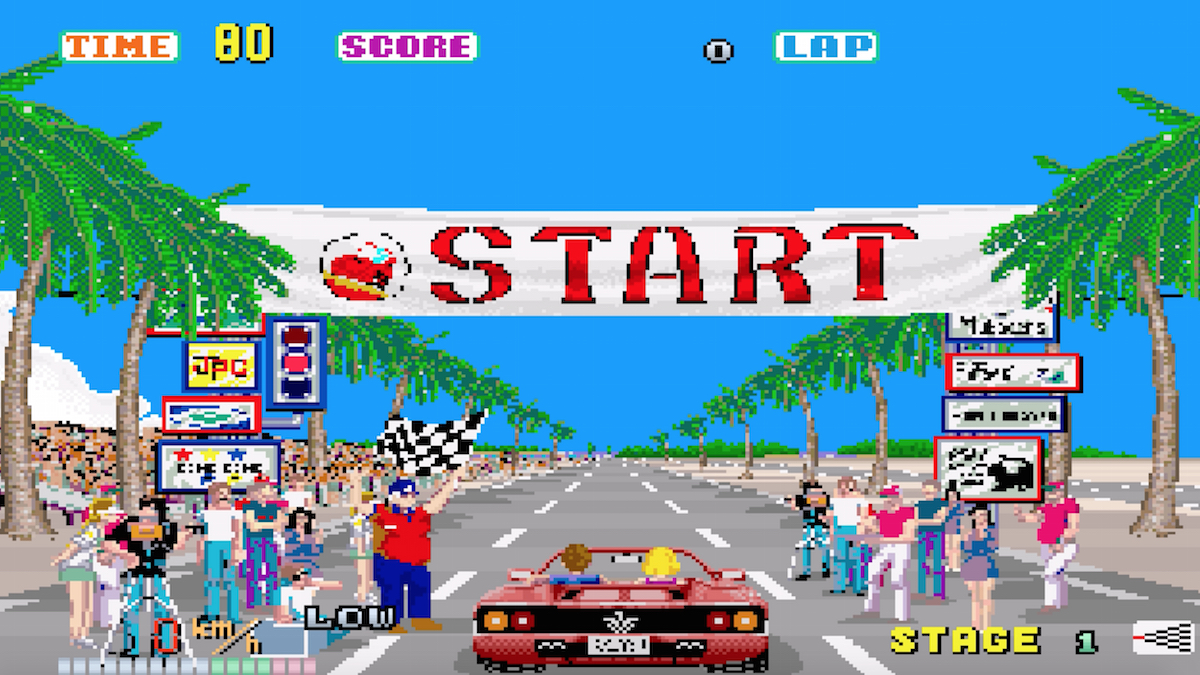 The first of our two Sega Arcade entrants and one that is absolute proof that time-based racing games aren’t just for nostalgia. Out Run remains just as enjoyable to play now as it is so cunningly wicked in its luring players into a false sense of security. For anyone who hasn’t played or even heard of this classic ’90s racer, Out Run is a pseudo-3D game where your goal is to get to the finish point before time expires. At certain points, the track deviates into two split paths, requiring you to make a split-second decision on which terrain/environment type you want to tackle.

While part of the challenge is of course reaching each checkpoint so as to refill your timer, the main gameplay lies in actively avoiding traffic all while maintaining the correct driving line so as to navigate its twisting, bending corners. Out Run gives no lenience to those who judge it wrong and whom might end up crashing into the environment on either side of the track — to the point you’re screaming “RESTART ALREADY!!” upon making that critical mistake. It’s a game as much about perfection as it is muscle memory and while it’s the least charitable mini-game here, Out Run is one of the more infectious reasons as to why traditional arcade games can be so addictive. 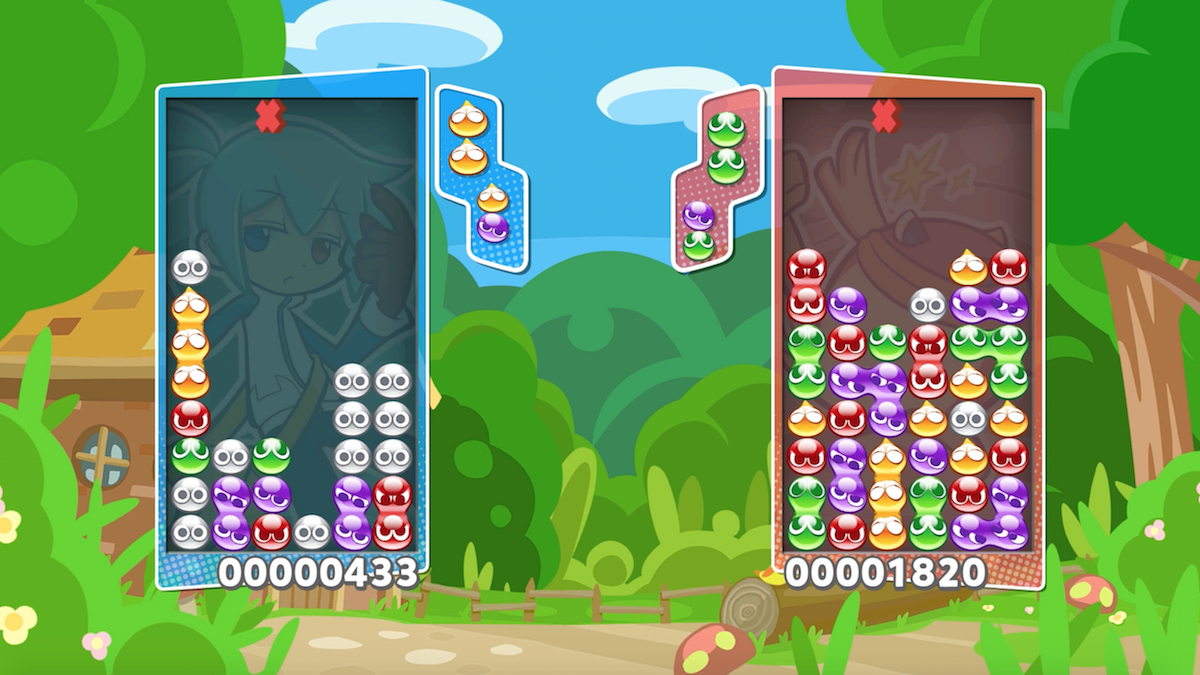 Though the established puzzle series has recently found an upturn in popularity thanks to its recent cross-over with fellow tile-matching giant Tetris, Puyo Puyo’s presence in Yakuza 6 offers the opportune moment for those of you eager to rack up as high a score as possible. For the uninitiated, Puyo Puyo is all about linking four or more of a particular color “puyo” so as to prevent your designated tower from filling to completion.

In Yakuza 6, the game’s primary competitive aspect is front and center with players able to pit themselves against an AI opponent or even each other via two-player co-op. But be warned, the AI — even on early levels — is no push-over and are always sure to try and tactically prepare a myriad of puyo chains so as to screw you over. Puyo Puyo, similar to fellow puzzler Bust’a’Move (itself a spin-off from Taito’s Bubble Bobble series) is all about deducing when best to complete a group so as to potentially, wickedly, ruin your opponent’s own strategic planning. More often a case whereby it’s whoever moves first that loses, Puyo Puyo is sure to shatter friendships, especially for those willing to risk it in couch co-op. 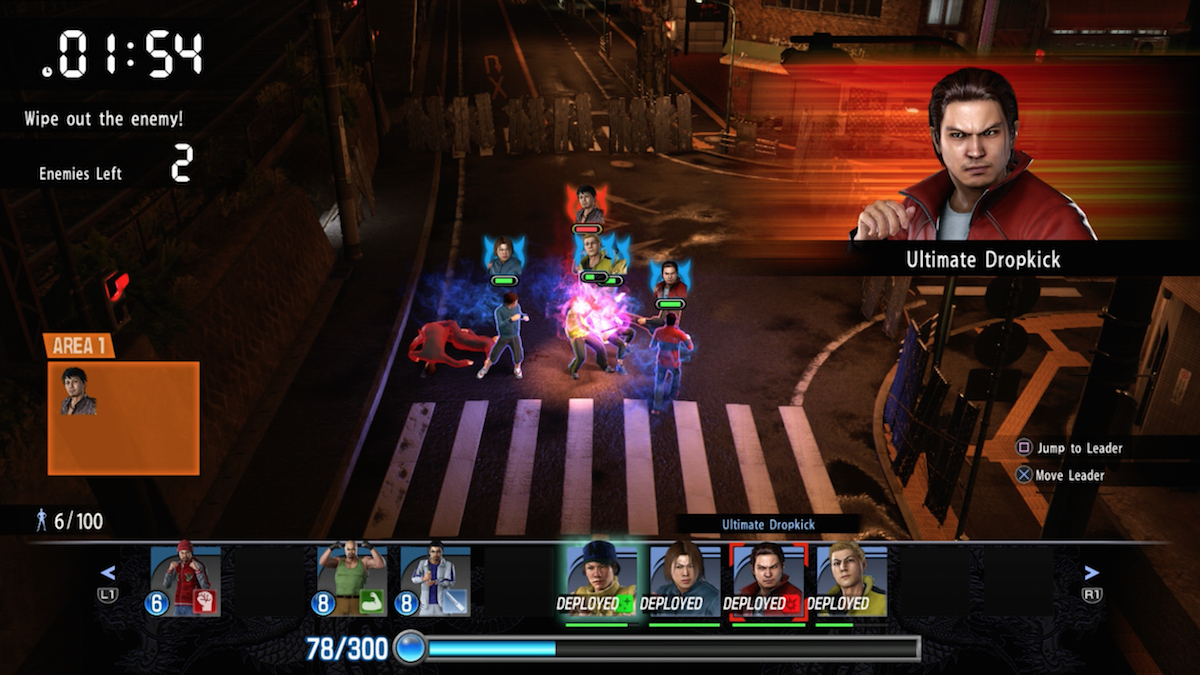 But if you’re looking for a game that manages to feel surprisingly fleshed out, compact, stand-alone and above all else, a mini-game you could find yourself easily spending more time invested in than you care to imagine, Clan Creator is easily one of the best mini-game offerings in Yakuza 6. A strategy RPG-inspired series of time-based missions that have you commanding clan members in real-time, overhead confrontations on the streets of Kamurocho and Onomichi alike. In much the same ilk that games like Metal Gear Solid V and even Xenoblade Chronicles 2 incorporate optional missions that make use of your accumulation of troops into, Clan Creator provides you a list of increasingly-difficult clans to duke it out with whereby you determine which members slot into designated roles.

Further to that, where each individual is ranked — potentially providing buffs to a given character’s strengths and skills. For such a simple premise, Clan Creator has a surprising level of depth and tactics to consider on the fly and one you’ll likely be changing as much out-of-battle as you will be in it. Deciding when best to throw in another brawler or “tank” or firearm-wielding specialist is just the tip of the iceberg, though. Besides, no mini-game ends a successful procession by having your entire clan — Kiryu as well — offering a gracious applauding of your work.