It’s best not to question the inner biological workings of a two-headed dog, especially when the heads are on either end.  Honestly, as anyone who’s ever owned a dog already knows, it’s doesn’t make much difference anyway.  Fortunately the two-headed pooch in Phogs! is all about adventuring through a happy world of bright colors, with each head working in co-op with the other to advance the whole doggy unit forward.  My time playing it was two-player, working in tandem with another player while each of us controlled a single head, but you can also go twin-stick style trying to do everything all by yourself if you can divide your brain in two.

Just about every task in Phogs! requires some level of cooperation between the two doggy heads.  From the moment they/it start/s moving to the last moment of jumping into a giant snake’s mouth to exit the level, the ever-cheerful pooch has to work with itself to progress.  About the only real skill the dog has is to grab things in its mouth, seeing as it’s got no paws or even legs, but it’s enough to get by.  One head grabs a ring and then the other swings over to grab the next, then the first lets go to swing over to the third ring in the series.  Or one head latches on to a faucet and the other spews water onto a seedling to sprout the nut the end-level snake requires to open its mouth as passage to the next area.  Seeing as the dog is basically two heads connected by a tube, water and even light passes through without problem. 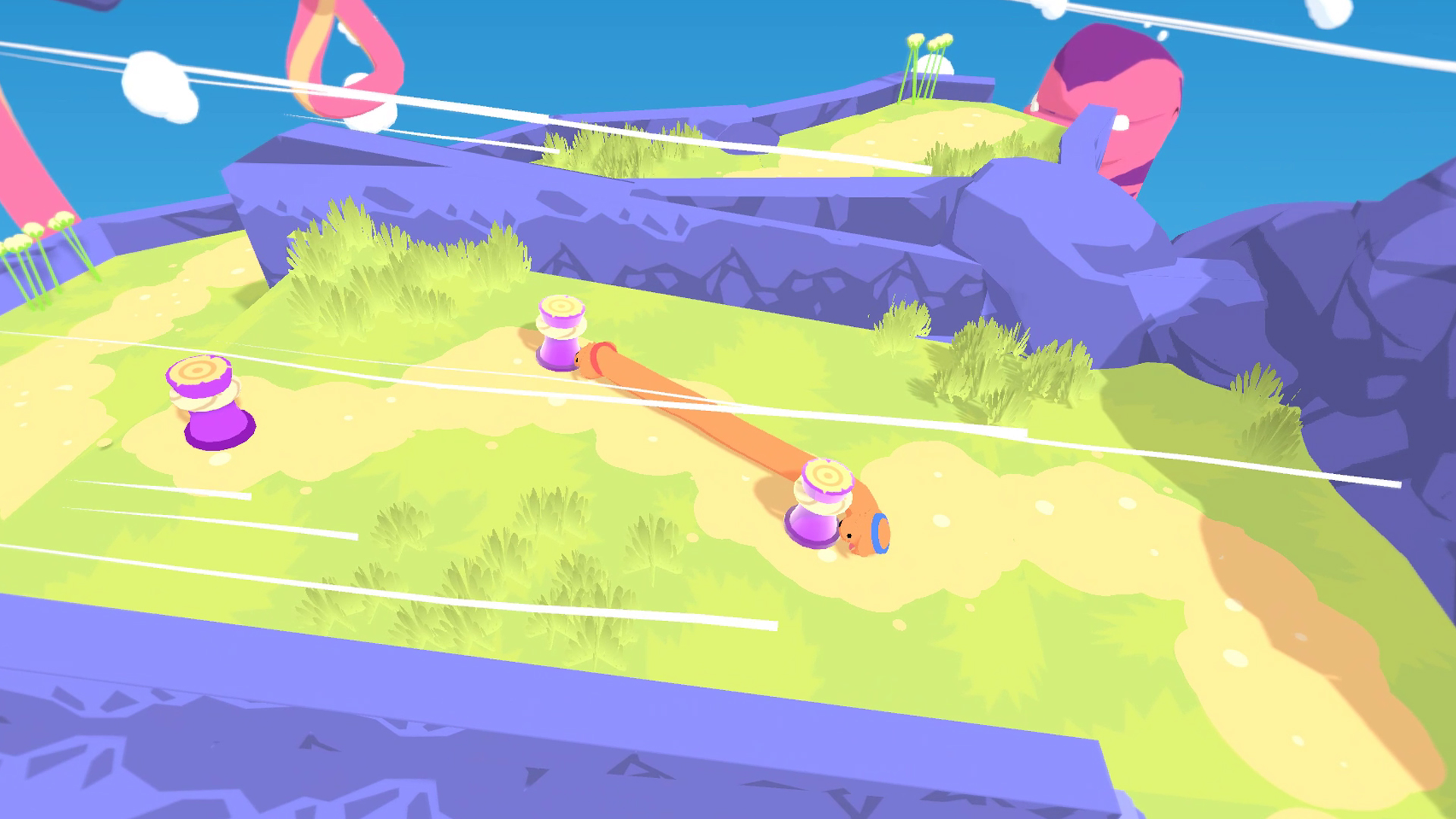 The heads aren’t too stuck with each other, though.  While they’re never going to be completely free their body is stretchable to a worrying degree.  This not only helpful when two players have different ideas on what’s important but also handy for puzzle elements that aren’t as close to each other as they might be.  The levels may not be particularly large but they’re still going to need a bit of exploration to both progress and turn up their secrets.

My hands-on time with Phogs! was only the first two areas with the themes of Food and Sleep (the third, Play, will be shown off later) but they had a nice amount of challenges to overcome.  Nothing too difficult, at least in these early sections, but each with a secret collectible to pick up and a nice amount of videogame weirdness along the way.  The game unquestionably skews young, but it’s a cheerful, upbeat young that’s fun for adults and would be a blast to play with one’s kids, too.  Or to set the kids working together just to see who throws the controller at the other first when arguing over which direction to go.  Phogs! is turning into a bright, happy cartoon of a game, and whether you play alone or with a friend it’s going to be almost impossible to resist the doggy’s infectiously smiling heads.