Every so often we get to play a game where the protagonist is someone we can truly identify with. As a bald bearded guy who spends a lot of time in the gym and lacks interpersonal and anger management skills, Kratos is one of the more relatable characters in my gaming career. The aforementioned description might not be as relatable to most of our readers, but that doesn’t change the fact that God of War is one of the highlights of the PlayStation 2’s library. Recently Kratos has stepped up his beard game and traveled to Scandinavia, but once upon a time he had a wee goatee when he was committing deicide against a large portion of the Greek pantheon.

God of War begins on the cheerful note of Kratos plunging face first into the sea to free himself of the nightmares of his past. Prior to his current state he was a respected and powerful captain in the Spartan army but one day met his match and needed divine intervention to save himself. Pledging servitude to Ares, Kratos was victorious over the barbarians and was bound to him through the Blades of Chaos. Kratos continued waging war under the command of Ares until one day when he attacked a village populated by worshipers of Athena. Unbeknownst to Kratos, Ares had transported his wife and daughter to the village for the purpose of killing them. In Ares’s mind this was to free Kratos of his earthly attachments and make him the ultimate warrior, but instead this turned him against his master, igniting his quest for revenge against Ares.

Flashing back three weeks prior to Kratos’s suicide attempt, God of War doesn’t waste any time getting down to business as Kratos is immediately attacked by other warriors on the ship which he quickly dismembers with his Blades of Chaos. This beginning sequence introduces the player to many important aspects of God of War, such as destructible environments, brutal combo filled combat, large enemies and the importance of killing anything with a circle above its head. As a Spartan warrior and usurper to the God of War’s throne, Kratos is absolutely ruthless on the battlefield. Decapitations, removing limbs and tossing enemies into the air only to continue slicing away is how a typical encounter with Kratos will play out. 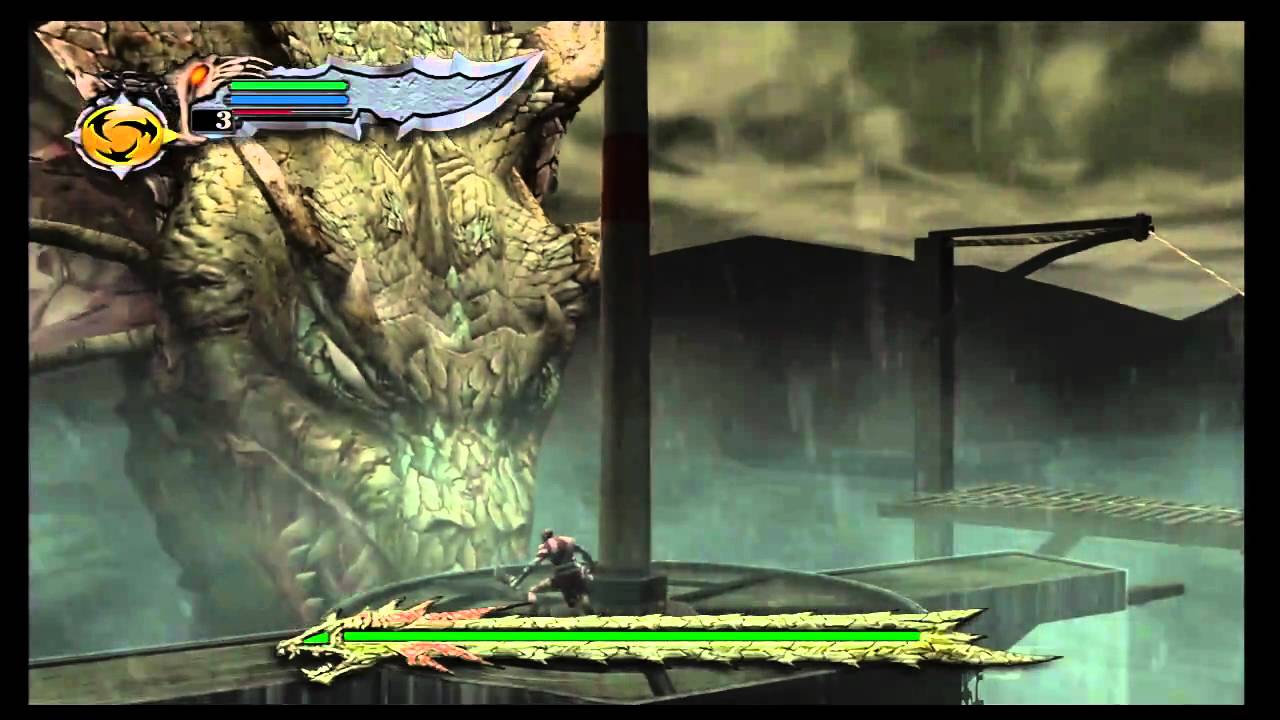 Reaching the end of this naval level Kratos has to defeat the hydra, which establishes two important principles of God of War bosses that continue with the later games in the series. The scale of these enemies is impressive, forcing Kratos to have to best some gargantuan creatures in his travels. The second part is these boss battles will typically follow some pattern that requires a certain strategy to overcome, usually involving a quick time event of sorts. This fight involves trying to get the two smaller hydra heads under control before going after the large head and figuring out how to take out the dragon head that is large enough to swallow Kratos the way we would take on a goldfish cracker.

Getting past this multi-headed sea serpent introduces us to another common recurring theme of the franchise, which is the sex minigame. During the very first playthrough this was a rather unexpected turn of events, provided a reviewer didn’t spoil it. The game was simple: rotate the thumbsticks as the screen instructs you to and then pressing the button in a QTE fashion to satisfy the women Kratos has taken to bed, even if it does only provide superficial mirth. Unlike in real life, if Kratos fails at completing this task he is able to try again instantly instead of having to wait thirty minutes. The sex minigame was mildly amusing the first time around, but as it became a tradition it felt less exciting and more forced in each subsequent entry (Editor’s note: too easy). As such, we are glad this is something Kratos left in Greece after he went through his midlife crisis and decided to go be a viking. 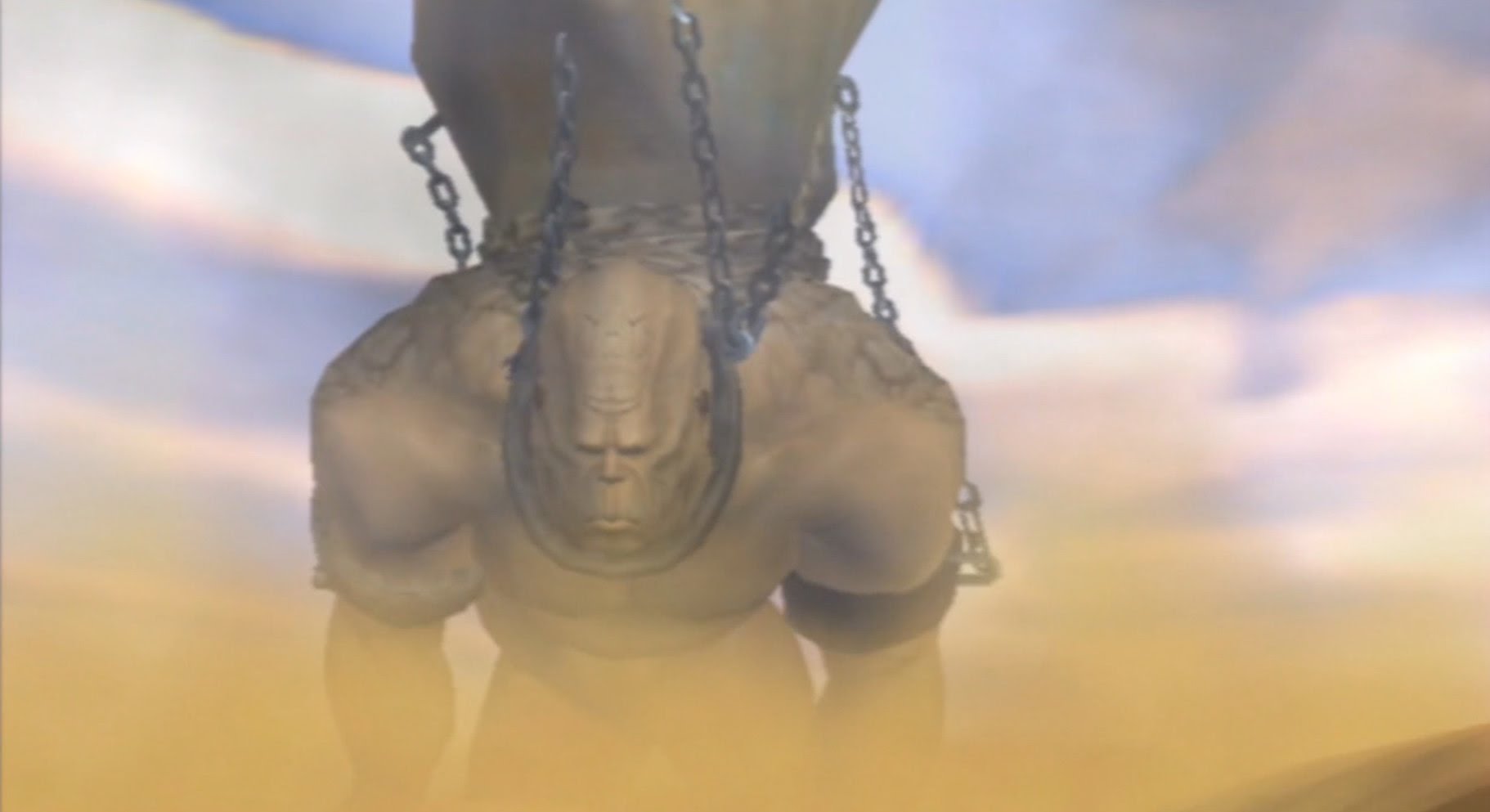 Greek history and mythology are filled with a wealth of source material for epic storytelling, which God of War carefully researches and compiles only to take countless creative liberties with them. The incredibly abridged version of the story is Kratos makes a deal with Athena to be forgiven by the gods for his misdeeds and rid of his nightmares if he kills Ares. This requires him to retrieve Pandora’s Box from a temple that was chained to the back of the titan Cronos, for within Pandora’s Box is the power to kill a god. Oh, and Kratos may get killed in this quest as an excuse to make the player travel through the underworld but he can come back to life if he escapes. So no deviation from traditional Greek mythology whatsoever.

During this journey Kratos will come across many gods and other mythic figures, though their exact roles from mythology may have been repurposed for the sake of telling the original story of Kratos. Kratos doesn’t wipe out everyone he encounters since we still have to worry about two sequels, two spin offs and one prequel, but he makes a decent dent in the Greek pantheon before he replaces Ares on the war god’s throne. I may be incorrect in this since I haven’t extensively revisited all six PlayStation Greek God of War titles, but I think across the series Kratos has the decency not to kill Dionysus or Aphrodite because booze and sex are important in making existing worthwhile. 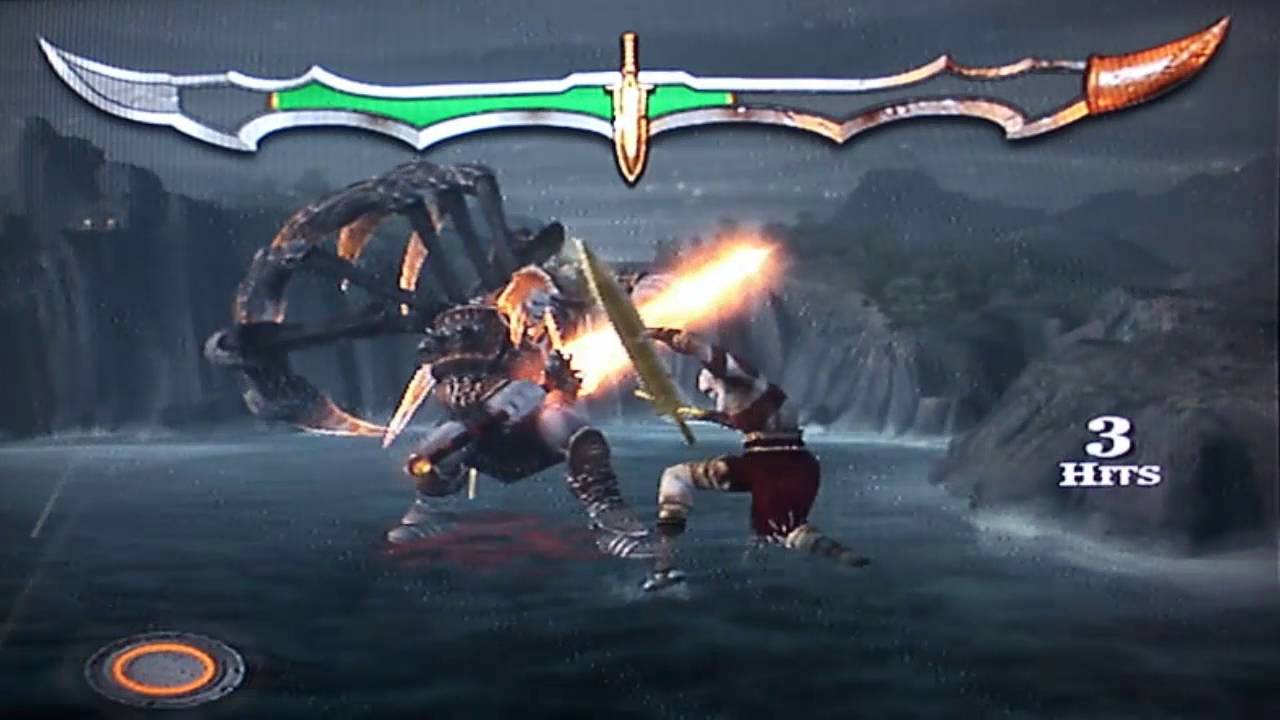 God of War kicked off one of the more memorable PlayStation-exclusive franchises. The scale of the structures in the world made the world daunting, but having such an ambitious world allowed it to house impressively-sized creatures for Kratos to fight. Watching the enormous Cronos in the introductory cutscene was impressive; having to scale the titan was something else entirely. And then there is the climatic battle against Ares. During the initial visit to Athens, Ares and his flaming hair are larger than life, but at the end of the game when Kratos has Pandora’s power it is a true clash of the titans. Kratos is a great antihero, though much of this first installment his emotional range runs the spectrum from angry to angrier. His character grows and develops throughout the series, leading to a satisfactory conclusion in God of War III. The success of the series led to the prequel God of War Ascension, and while that title was not terrible, it clearly was the weakest entry in the series and a far cry from the level of grandeur the main trilogy provided. There was nothing left for Kratos in Greece; his family was dead and none of the surviving gods made for convincing antagonists, let alone the fact their numbers were too few for a proper game. The days of Kratos being a warrior were over, so he traveled north to get a new start where time and distance could ease his memories. In this new land he met a nice viking girl, and while things didn’t seem to have worked out with them in the long term, he at least gained partial custody of his son. Soon the two of them were out in viking country, realizing there was a whole new pantheon of gods for him to kill. Kratos needed a break from death and destruction, but no God of War could live out his days in peace.