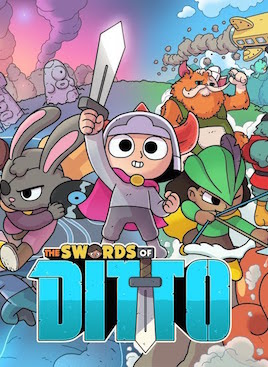 The Swords of Ditto

While one’s assumptions about the inclusion of roguelike level-building have been proven wrong by some well-designed games, the ample number of releases that end up degrading their possible longevity usually outweigh those that help expand it. An environment organically crafted with reason will always trump one that’s mathematically construed and left to pure, computational luck. We can of course take note of developer onebitbeyond’s clear hearkening to contemporary cartoon animation or even the generally upbeat nature of its aesthetic — both of which resonate well in a game like The Swords of Ditto — but there will always come a point where the back-end limitations begin to show and the early proceedings reveal themselves as the one-and-only loop underpinning the whole experience.

Of course The Swords of Ditto doesn’t shy away from the notion that, more likely than not, you’ll find yourself repeating the same basic gameplay loop. Explore the overworld, discover and subsequently beat a dungeon or two, level up along the way. There are moments sprinkled about that feel intentionally set up to trip the player up. Enemies that have the potential to gang up on you and inflict serious damage; traps that can set off a chain reaction which similarly incur a greater loss to one’s health. In regards to solely its RPG aspects — particularly the constant shift from combat to puzzle-solving and back to combat — The Swords of Ditto is a competent enough experience that more than warrants its players approaching things with a bit more of a careful consideration. When instructions are there to be subtly learnt and discovered for themselves, there’s no problem.

There is a problem, however, when it comes to everything else the game looks to introduce and explain. Or rather, not explain; this surprising absence — this deliberate keeping players out of the loop — that feels like The Swords of Ditto’s greatest hindrance. Players have the ability to rewind time so as to better prepare for the final boss via the use of a particular item…though it’s never stated you actually need a certain number of said item before it’s too late. Time itself is restricted to four in-game days yet never provides any manner of hour-by-hour dial/clock. Seemingly useless items dropped by enemies actually play a role without any vague suggestion. Penguins that momentarily pop up about the map that can be used to increase your bomb count, but it never says how you go about actually catching them before they disappear for the time being. Then there’s the bizarre justification of what enemies reward you with XP and which ones don’t. In the most baffling, extreme scenarios: two enemies of the exact same type/level — one rewards XP, yet the other one doesn’t for some reason? 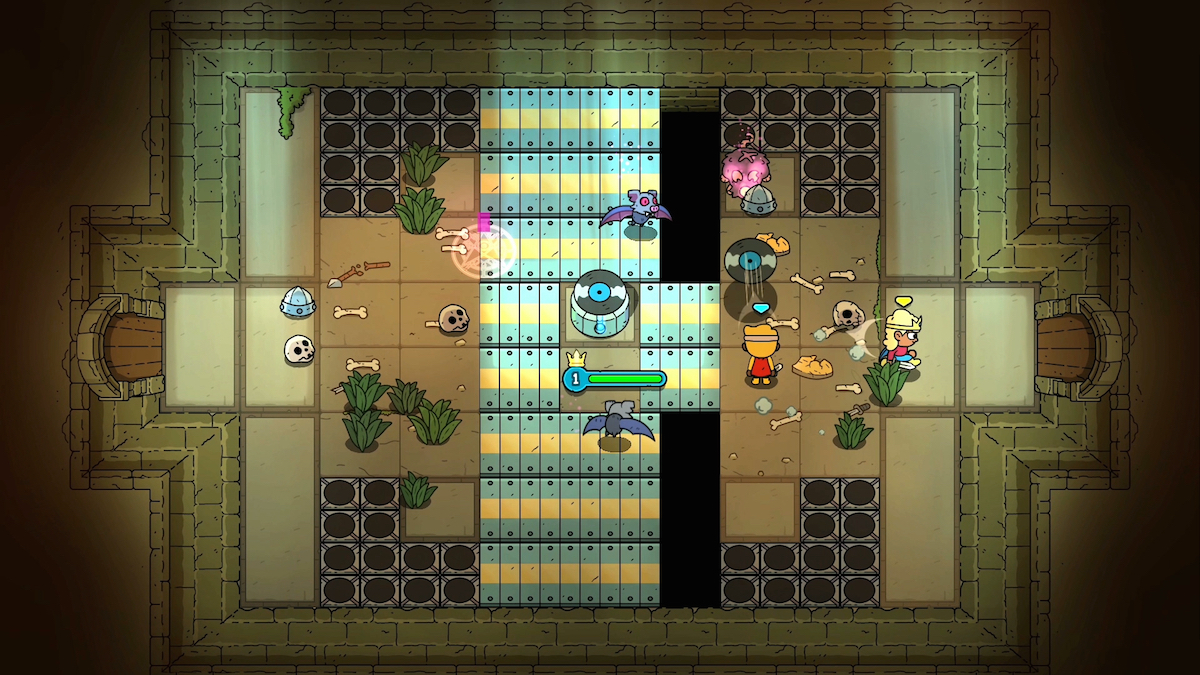 These small little irks, frustrating on their own, only pile up the further you progress or perhaps find yourself restarting the loop upon your previous character meeting their untimely demise. Yet for all its procedurally-generated make-up in regards to its dungeons as much its overworld, the game does a fine job at pushing past its roguelike structure to be something more. More than its novel get-around of character death — players simply taking the role of someone else an additional hundred years into Ditto’s fated future — its main gameplay does chug along at a reasonably fun pace, even if it can get a little cumbersome with its necessity to grind your character to the next level so as to open a dungeon’s entrance.

Combat is still engaging and edge-of-your-seat when it needs to be — certain end-dungeon bosses do surmount to a fitting test of one’s skills and are just-as-fittingly satisfying to conquer as a result — even if it is built around mechanics we’ve seen a thousand times already. Three-hit combo’s, dodge-rolls and the ample number of buffs/status effects to consider along your way. Though enemies can suffer from said status effects as well and the ability to lure one enemy into another’s line of attack or incurring some area-of-effect poison/flame/ether to one another, adds an additional level of strategy and smart thinking on top of what is a pile of modest niceties the game manages to sprinkle about that neither lift up nor hinder the steady flow of one’s time. 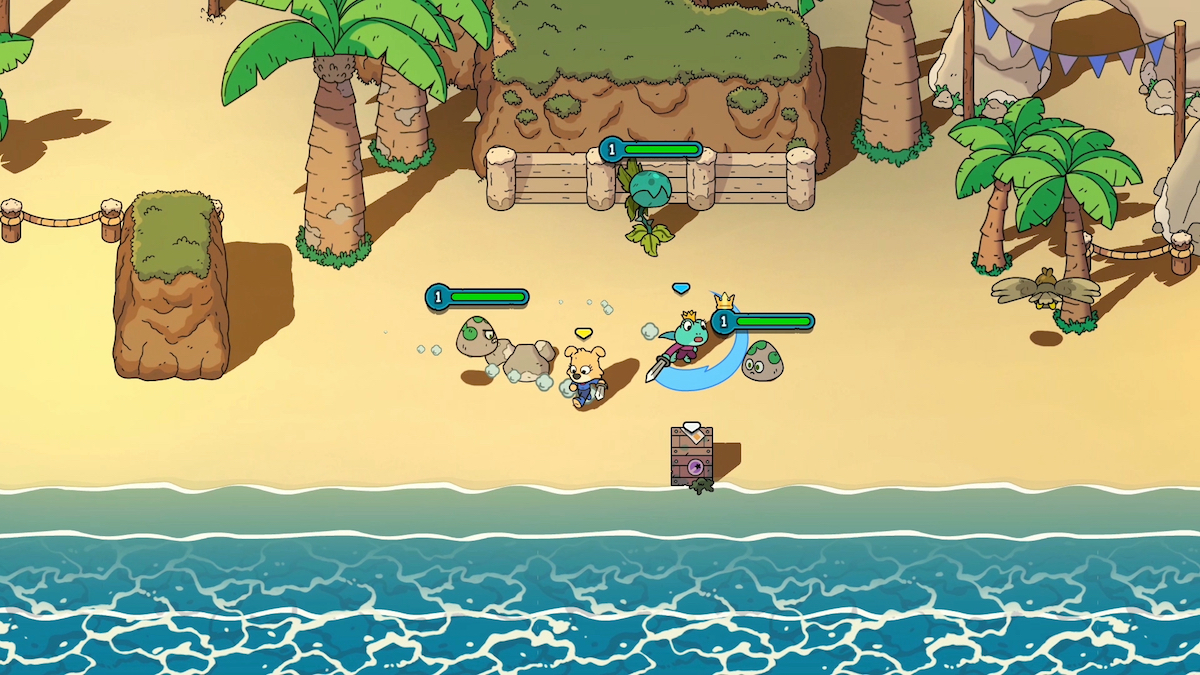 Perhaps the best moments — the ones that do help push The Swords of Ditto into the realm of unexpected surprise — are those that are (or at least feel like they are) outside of the regulation of its core loop. Stumbling upon an NPC whom gives you a key to an unknown location which in fact turns out to be a completely stand-alone dungeon, complete with its own puzzles, and best of all, worthwhile items/loot to salvage. When it’s at its most organic — least of all when the roguelike delivery of its dungeons, no matter how many times you might have seen that same aesthetic/texture/color palette, aren’t as obvious — The Swords of Ditto is a wonderful demonstration of how to do dungeon-crawling right. Albeit dungeon-crawling to a procedurally-generated caliber.

While some players may easily complete the main campaign in under four or five hours, part of the charm the game deservedly garners is in picking out each and every secret tucked away amidst the many caves and generated dungeons alike. The addition of stickers, which grant stackable buffs/skills, as well as the ample amount of items/weapons to uncover literally means that no one play through will be the same. And while there’s rarely a restriction on how far you can progress with your current arsenal, the accessibility of its combat, together with the positive and upbeat art-style (even when its tone is at its most unsettling or oppressive) always brings an allure to keep at it. 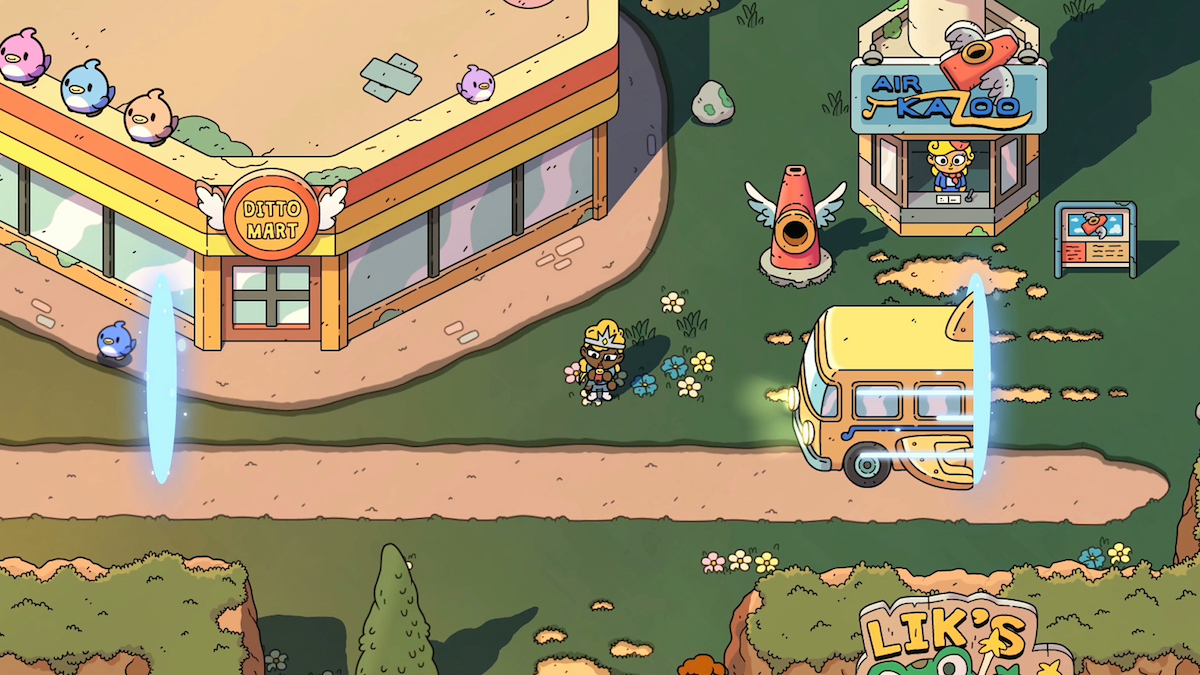 By no means as high a flyer as the ample Devolver Digital outings as of late, The Swords of Ditto does conjure enough of a challenge and inevitable reward for the adventure to feel satisfyingly just, if a little taxing and lost in translation at points. The absence of some key explanation aside, the implementation of roguelike elements does thankfully ease into the backdrop when it needs to, leaving the more organic components through exploration to flourish more so. As obvious these repeated assets or limitations may be. The Swords of Ditto thankfully doesn’t end up faltering as a result, managing to ride out its weaker moments to deliver a dungeon-crawling RPG, that while unspectacular, is nonetheless worth the time and effort needed to tackle its ordeals head-on.