When it comes to outrageously fast-paced action games such as the Devil May Cry and Bayonetta series, there’s always room for more. Assault Spy is the latest title trying to appease genre fans with gameplay full of speedily dashing and fighting with an unique style to tie it all together. Up until now, developer Wazen has been trucking along with a tiny development team of one — and you can’t tell at all. NIS America’s decision to publish the indie title is likely due to the fact that this looks quite polished at first blush. Of course, looks aren’t everything. As of now, Assault Spy is in Early Access and will remain there until at least Fall 2018.

It may not be a finished product just yet, but the build on Steam does provide enough to get a good feel for the core concept. Players jump into the shoes of a spy focused on getting important business intel from corporations. The full game will feature two playable protagonists — Asaru and Amelia — but right now the game only offers Asaru as a playable character. He’s down on his luck and forced to take any jobs due to being paired with a terrible partner named Kanoko. She takes nothing seriously which leads to trouble on practically every mission. After getting a sense for the characters and gameplay in an extended tutorial, players jump into the real meat of Assault Spy. 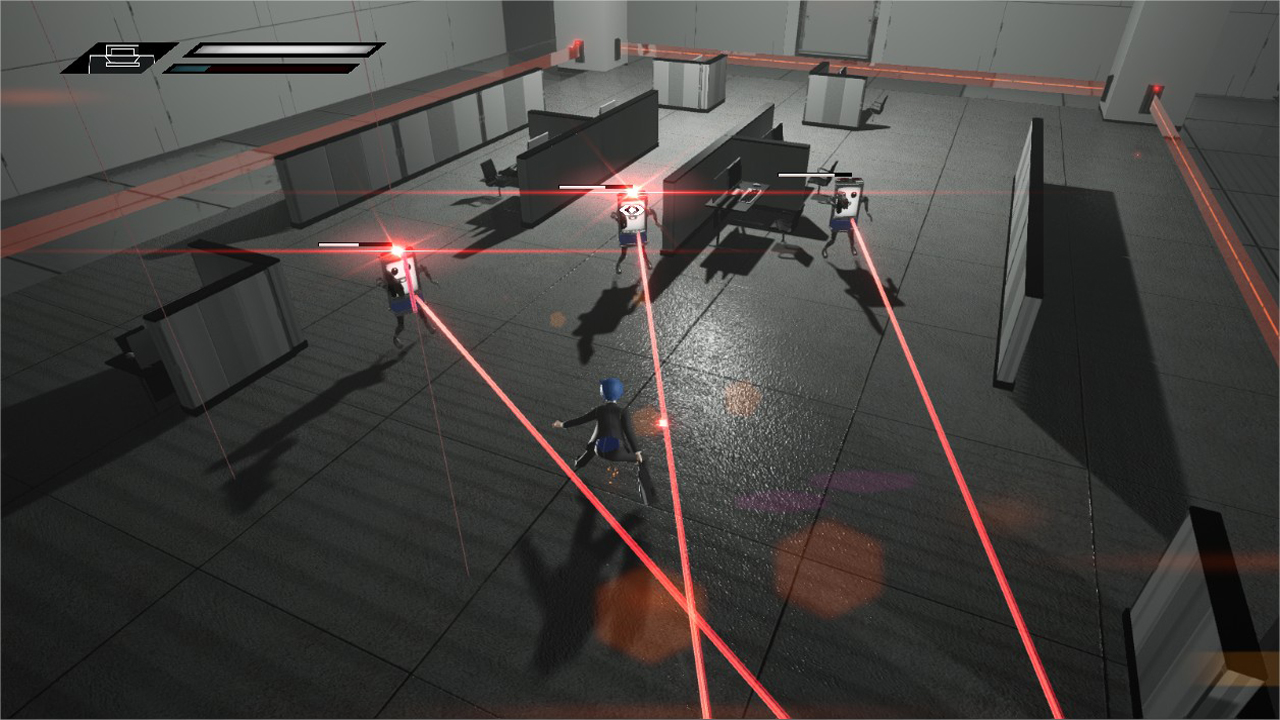 The gameplay loop for Assault Spy appears to be based around taking down four major bosses in order to stop a violent “hostile takeover” of the Negabot Corporation. Unfortunately for Asaru and Kanoko, Negabot specializes in robotics. As such, expect tons of normally subservient service robot baddies equipped with lasers, guns and more. It’s weird, yet hilarious, seeing a simple Roomba-style robot puttering around only to attack with a hidden sawblade. Players will need to learn the patterns of these different bots in order to most efficiently take them down.

Offering a corporate espionage storyline is nice and all, but the most pressing aspect is whether or not the gameplay is good. So far, it’s going in the right direction. Players start out with simple abilities — jump, dash and a light and heavy attack — and there are also a variety of different attack patterns which enhance the core moveset. There are also unlockable moves in a variety of groups which allow for more maneuverability, projectile attacks and a better means to beat down on enemies in general. Although these moves require specific button presses to utilize, it’s also easy to get through most areas by simply button mashing. Chances are that won’t hold true for the entire game, though. 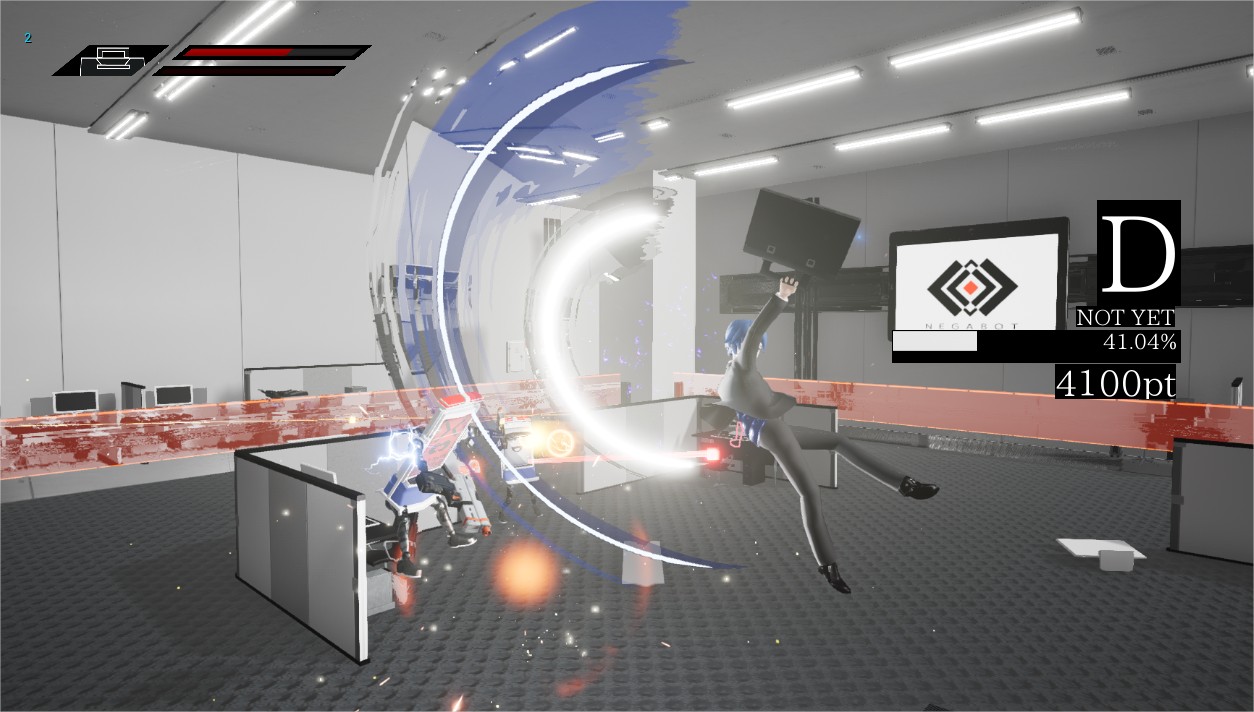 Enemies are dumb. They hone in on you mindlessly, or a distraction if you put one up, and nothing else. If they see Asaru then they’ll continue walking in the same direction. Because you are so much faster than the enemies it’s easy to juke around them with fast dashes to deliver a killing blow. Every enemy is also slow with attacks and clearly designates when they’re about to strike with a red flash. Even so, combat becomes tough when there are tons of enemies all coming for you simultaneously. Bosses provide more interesting battles because these characters typically can match Asaru’s own speed and multi-faceted attack skills.

Stylistically, Assault Spy is both intriguing and droll. Thanks to taking place within Negabot’s headquarters you should expect to see a ton of business environments. There are cubicles, meeting rooms and vending machines. The futuristic, sparse design and setting itself do set the game apart from anything else in the genre even though the backgrounds are perhaps too sparse. Menus could use more work to spruce them up before final release. There’s probably something to be said about further improving gameplay as well, but it already flows well. It would just be nice to see more unique battle setups then simply walking into a room, disposing of robots, then moving onto the next same-y room. 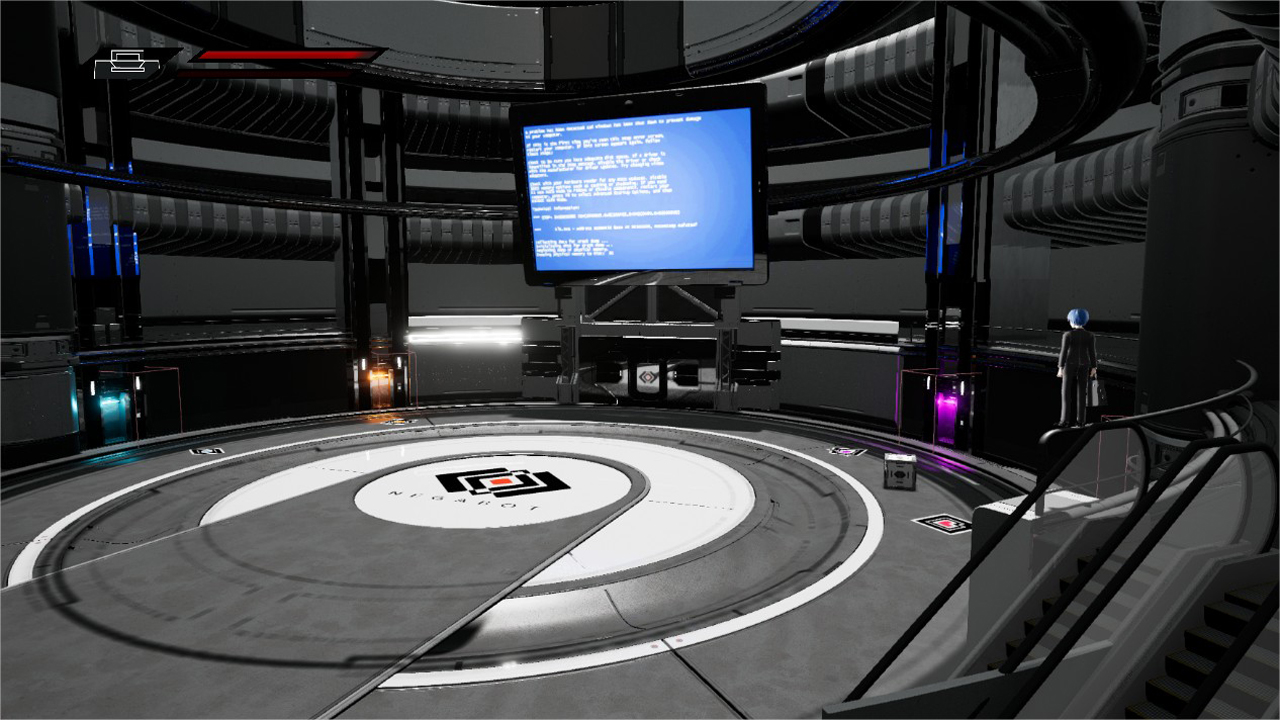 Unlike some Early Access releases, Assault Spy already features a soundtrack and even full voice acting for the story segments. The Japanese voice acting already seems ready to go rather than a first recording. The music gets jazzy and feels inspired by Shoji Meguro’s work on Persona. Character sprites also look polished. There’s still a ways to go before the game is ready for full release, though. Outside of currently only having one of the two promised playable characters, there’s only about a fourth of the story mode included.

It should take most players just under two hours to run through to the end of the currently available story mode. After that, they’re left on a cliffhanger after a first major boss fight. The only other mode included at the moment is a training room to test out Asaru’s skills. If Wazen continues to update the game build on a regular basis then it would be worth jumping into the game early. If it takes a month or two between updates, however, then it may be better to simply wait for the Early Access period comes to a close. Either way, Assault Spy shows promise at this stage of development.