Hot off the news that the Virtual Console isn’t coming to the Nintendo Switch, many gamers are understandably disappointed. In the past, we’ve wondered where the Virtual Console service was and when we’d finally get it, but it looks like the truth is it’s never coming. The Switch is the perfect device for playing older games, as they can be played both on the go and on the big screen, so why in the heck is Nintendo dropping this lob of easy money and goodwill among its fanbase? Well, it might not be so cut and dry. There are various reasons Nintendo may be forgoing the Virtual Console for the Switch, chief among them being their extremely successful Classic line of mini-consoles, their Netflix-like distribution method of NES games that will be coming along with their recently announced $19.99 USD a year online service and a desire to make legacy games more than simple emulations. It’s time to look beyond Nintendo axing the Virtual Console banner and think up what else they might be up to with legacy gaming.

We’ve previously imagined what the Virtual Console might look like on the Switch, but now that the classic idea of what the Virtual Console was is off the table for the Switch, there are other ways for Nintendo to deliver these golden oldies to fans. First there are the Classic line of consoles, of which we’ve already gotten the NES Classic Edition and the SNES Classic Edition. These little guys are essentially greatest hits packages bundled inside miniaturized versions of the original Nintendo Entertainment System and Super Nintendo Entertainment System, with nearly identical controllers from their original counterparts — infuriatingly short chords and all. They brilliantly emulated the games from the original consoles and added a few quality of life additions, like a quick-save feature and the ability to use different controllers if so desired. The SNES Classic even introduced the world to Star Fox 2 in proper form for the first time, as it had been canceled after being essentially finished in favor of starting from scratch to make Star Fox 64 for their first truly 3D console. 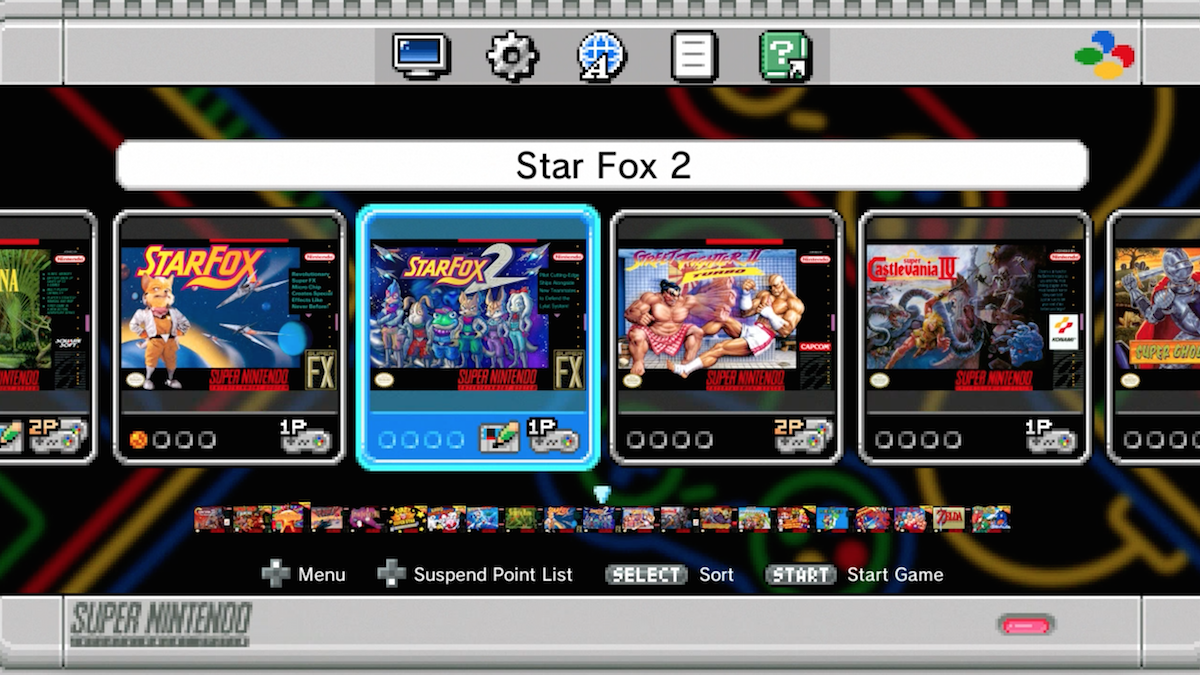 The NES Classic came with 30 games, many of which are must-play golden gems from the early days of console gaming, like Super Mario Bros. 1,2 &3, The Legend of Zelda, Metroid, Mega Man 2 and more. The SNES Classic paired its collection down to 21 games, but almost all of them are masterpieces, including Super Mario World 1 & 2, The Legend of Zelda: A Link to the Past, Super Metroid, Final Fantasy VI, Mega Man X, Super Castlevania IV, Earth Bound and more (though, it notably and tragically left out Chrono Trigger). Nintendo is sure to release a Nintendo 64 Classic Edition this holiday season, packing in even more undeniable heavy hitters, and though its controller hasn’t aged well, Nintendo could do a lot to tweak some of its weaker qualities. This Classic line could go as far as the GameCube, but is unlikely to go further than that, considering the recentness and more complex input methods of later consoles. They could also introduce a handheld Classic line for the Game Boy, DS and more, but that’s for them to decide. What these machines aren’t capable of, however, is delivering games in an à la carte fashion, allowing gamers to pick and choose the legacy games they want and eschew the rest. Even with these successful Classic machines, it doesn’t quite add up to Nintendo ditching legacy titles for the Switch – something else is likely the culprit.

Nintendo recently detailed their paid online service, simply called Nintendo Switch Online. It’s launching in September and will run gamers $3.99 USD for a single month, $7.99 USD for three months, $19.99 USD for a full year and $34.99 USD for a year-long family plan that can include up to eight systems. Naturally, it’s replacing the free bare-bones model currently in place, meaning if gamers want to play Switch games online, they’ll have to pay for the service just like the other consoles. This paid service will also allow access to a collection of classic games that can be downloaded and played for “free,” just like PlayStation + and Microsoft’s Games with Gold programs – though, as of now, it doesn’t appear that Nintendo will be giving away proper Switch titles any time soon. As of now, the service will be launching with twenty NES games, nine of which have been formally announced: Soccer, Tennis, Dr. Mario, Donkey Kong, Mario Bros., Super Mario Bros., Super Mario Bros. 3, Balloon Fight, Ice Climber and The Legend of Zelda. 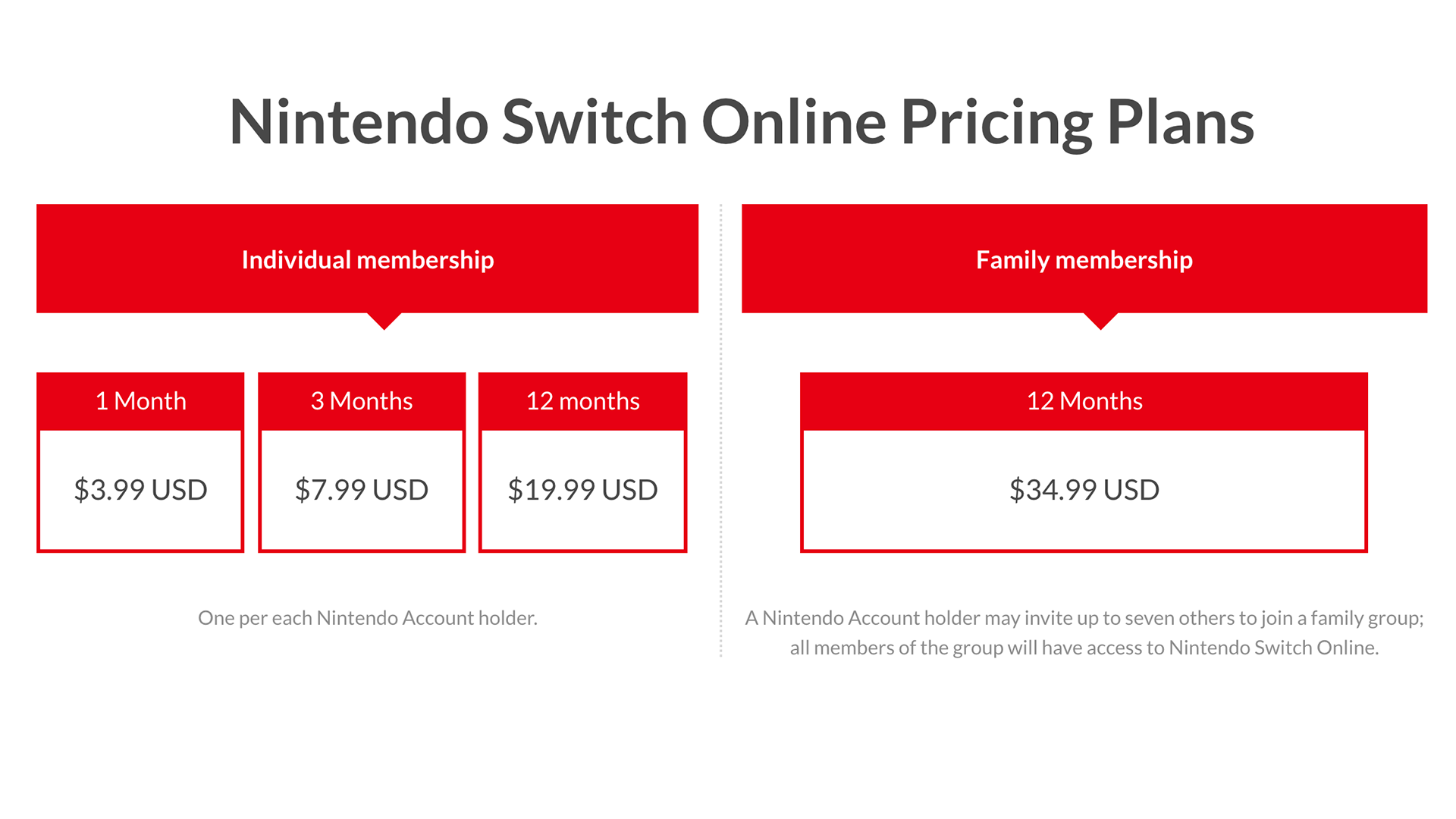 The most interesting thing about these classic releases are their new additions. Each will have online functionality, like leaderboards, or in some cases, online play that can include passing the controller for games like the original Super Mario Bros., where one player would be Mario until they died, then the next would play as Luigi. This online play could be a game changer for classics on other consoles, like the multiplayer-centric Mario Kart series or classic Super Smash Bros. games. Though they’ve kept silent on this, there are more new additions to these games that have yet to be announced. This could include improving the games instead of simply porting them. Think of this as a pseudo remaster, where aspect ratios could be shifted to 16:9 to better fit the Switch and HD television displays. This wouldn’t mean stretching the image, but rather altering the game’s programing to allow the game to be properly played in a wider format. This is just conjecture, but it’s an exciting prospect if other Nintendo console and handheld games were introduced in this fashion.

This got us to thinking: perhaps this is why Nintendo is discontinuing the Virtual Console line in the modern era. Simple emulation has been done, and they could very well be preparing for a new way to digest legacy games. They’ve already made some notable improvements to older games in the NES and SNES Classic Editions, why not take it further? Not all games would be conducive to this, and it’s unlikely Nintendo would make these changes to non-first-party titles, but releasing the best, most modern versions of legacy games could very well make gamers who already bought all the classics back on the Wii and Wii U do so once again, just to have the best possible Super Mario Bros. experience. 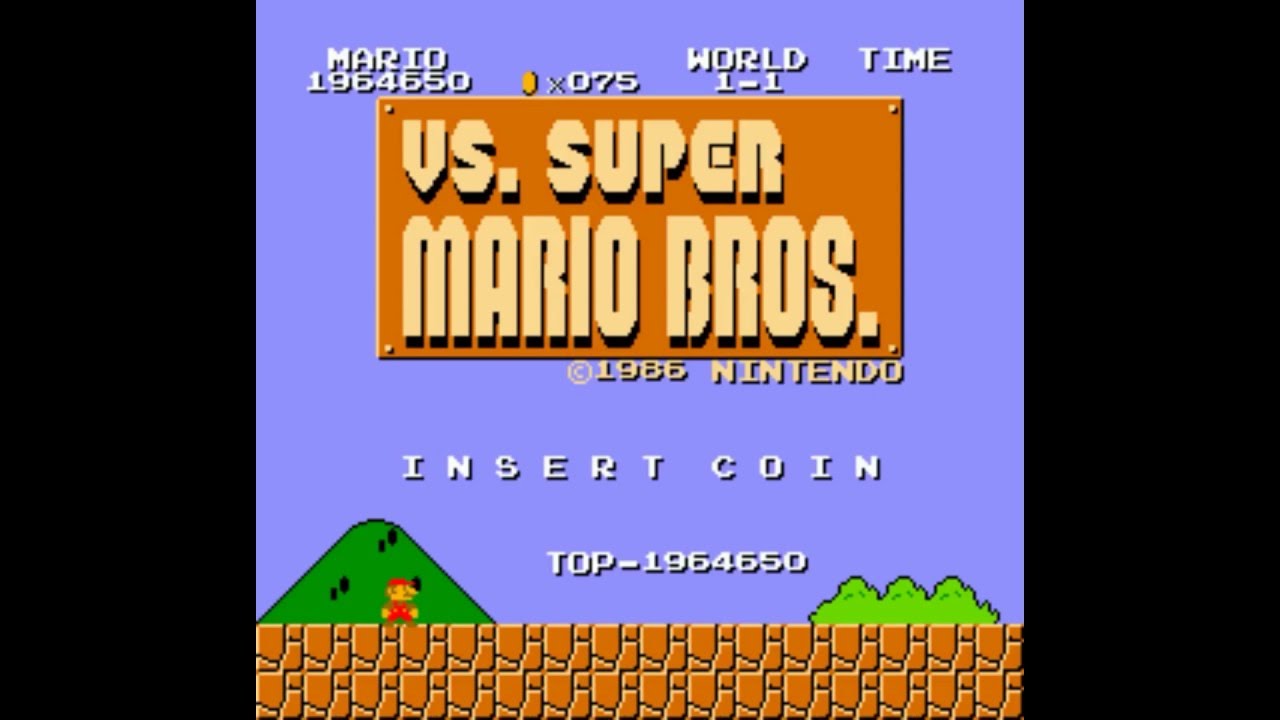 This is decidedly not the best possible Super Mario Bros. experience.

It’s unlikely Nintendo will restrict these games as “free” titles through the Nintendo Switch Online service and will instead offer some for a month-long period (as previously announced) and the rest could be purchased permanently if so desired. It’s highly unlikely that Nintendo will stop with NES titles and have even mentioned the possibility of SNES games coming to the Switch. More than that, N64, Game Boy, Game Boy Color and Game Boy Advance games could come to it as well – in fact, expect this to happen at some point in time. Even further, the much clamored over edition of GameCube games is a distinct possibility in the future, and with the motion-capable Joy-Con, Wii games could come as well. If this is the case, don’t decry the death of the Virtual Console: embrace the possible future of legacy gaming.

Only time will tell exactly what Nintendo is planning to do with their bevy of legacy gaming content for the Switch, but it almost certainly won’t stop with twenty NES games at the launch of the Nintendo Switch Online service. In fact, don’t expect it to stop with simple emulation either, as the included online features could be implemented in most legacy games and even more can be done to improve these classics. Though Nintendo gave us a brief glimpse at their online plans, more are likely to be disclosed at E3 this June or at least before its launch in September. Until then, keep an eye on Hardcore Gamer for all your Nintendo news, reviews and more.