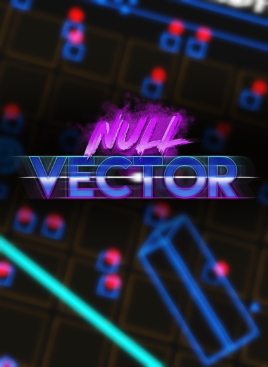 There’s always an element of risk involved when attempting to mix genres. Add too much or too little of one or the other and players will question why the attempt was made in the first place. Select the wrong elements and the experience is doomed to feeling clunky at best and downright irritating at worst. Choosing the correct pieces and getting the mix just right, however, will yield a product that feels so natural that players will wonder why no one else had thought of it before. Such is the case for Null Vector, a surprisingly successful fusion of twin-stick shooter and roguelike.

On initial inspection, it appears that Null Vector’s creators had two main goals for their project. First, create a faithful callback to the vector-style arcade games of the 1980s; a goal that it fulfills with great enthusiasm as the simple presentation comes across beautifully. Thankfully, Null Vector doesn’t just copy the techniques of the past. The original vector graphic-based games were novel back in the 80s, but they weren’t exactly easy to look at. With few exceptions, they were confusing messes that were more likely to result inspire headache than they were feelings of enjoyment. Instead, Null Vector is more like a modern re-imagining of the aesthetic.

Unlike more modern peers such as Geometry Wars: Evolved, Null Vector doesn’t solve the old vector problem by simply keeping everything flat. It still creates the illusion of 3D space, but limits it with an almost top-down perspective. Combine that with enemies that make full use of all three dimensions, a smooth 60fps framerate, clear distinction of the player’s ship from their enemies, have everything radiate a cool tron-like glow and the result is a game that’s beautiful in its simplicity. It’s not completely perfect; the game could use a couple more musical tracks and it keeping track of one’s ship can get difficult on screens filled with enemies and projectiles. Beyond that, Null Vector’s presentation is well-crafted indeed. The same can (mostly) be said about its gameplay. 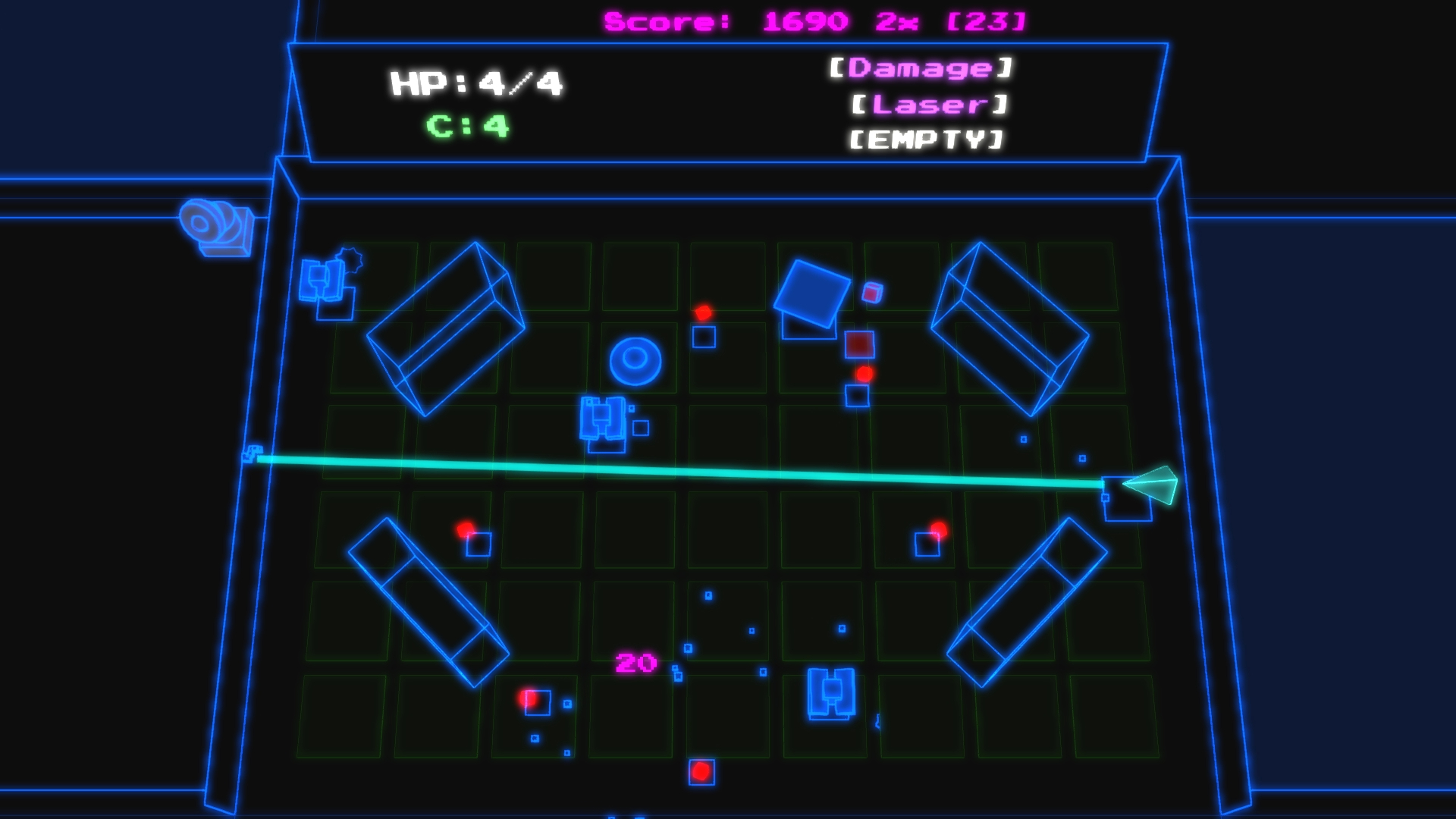 There’s plenty to like about Null Vector, but only once its most standout issue is dealt with. Put bluntly, the default controls aren’t ideal. It’s absolutely playable with its keyboard control scheme, but twin-stick shooters are that name for a reason. Without a controller or at least remapping aiming to a mouse, it becomes all too easy to trip over one’s fingers, drop important items and generally get oneself blasted to oblivion while attempting to quickly outmaneuver enemies and their many, many projectiles.

Null Vector succeeds as a blend between twin-stick shooter and roguelike because both aspects continually feed into each other. Its shooter half serves as the gameplay foundation while the roguelike portion provides a strategic framework for players to work within. Being able to consistently eliminate enemies and evade their attacks is vital in any shooter, but Null Vector takes it a step further by constantly asking players to make decisions and evolve their strategy. Ample warning and time is given to players before anything happens, allowing them to consider exactly what the best move is. Is it better to tackle the single wave room first or the three wave room? Move onto the next stage the smarter option or would it be better take on the challenge room for a chance at more power? Is that sub-boss worth the risk? Every action has the chance to yield rewards, but the chance of getting overwhelmed is just as great.

Most of these choices revolve around power-ups (aka “ship parts”) and crystals (Null Vector’s currency). Ship parts increase the ships offensive and defensive capabilities. Once acquired, ship parts can be either upgraded or permanently welded to one’s ship in order to free up inventory space for new parts. Upgrading and attaching pieces is essential to progressing, but every extra bit of power comes at a cost. Crystals aren’t exactly plentiful and they can be traded for all-important health as well as upgrades, welds and map knowledge. As players progress through the game and start dialing-up the difficulty, success or failure can hinge on how they spend their crystals. It can also heavily depend on the order one chooses to clear a stages rooms, or even whether or not they attempt them at all. 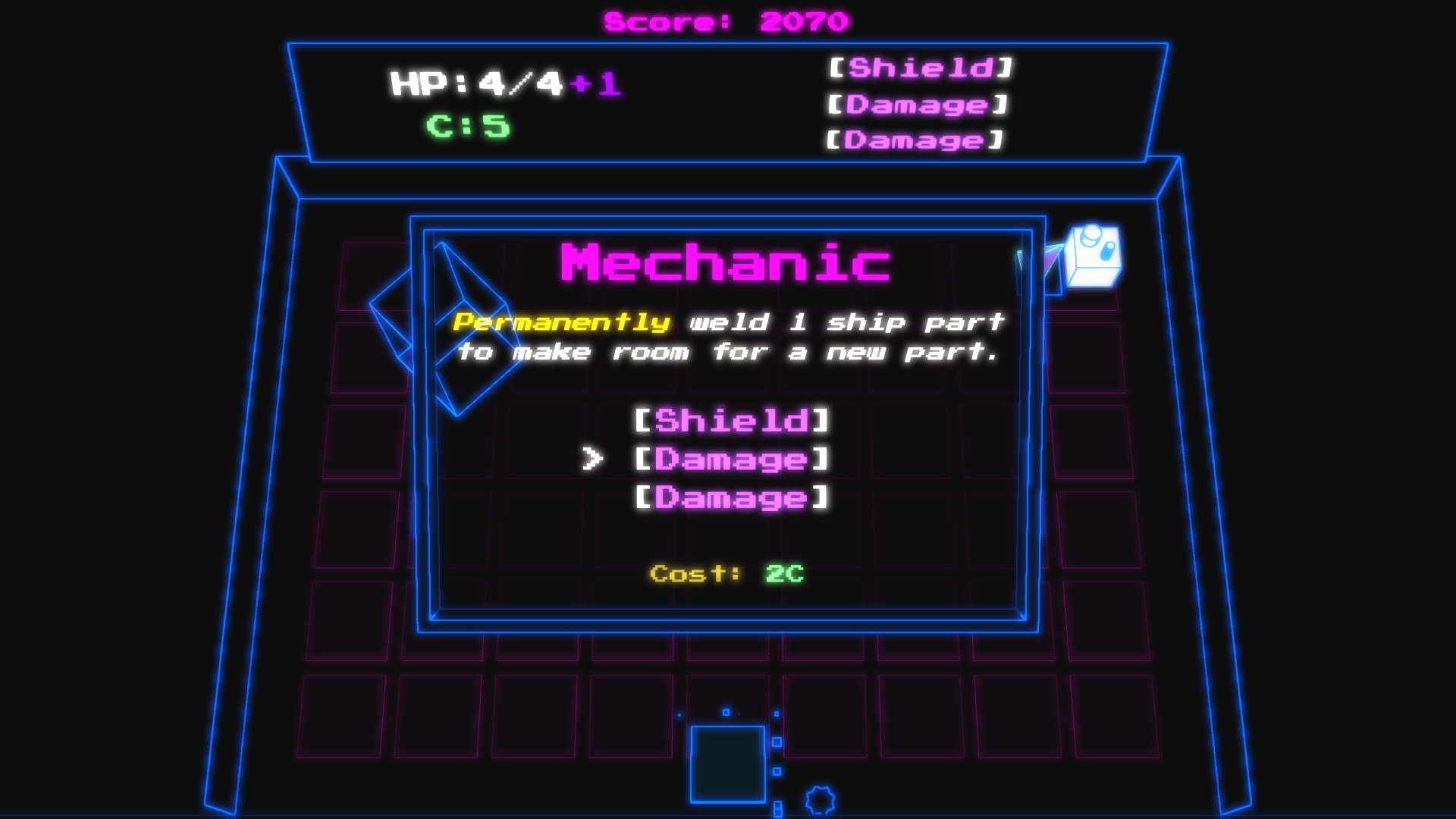 Stages in Null Vector have a few constants, but are otherwise randomly generated and it’s up to the player to figure out how best to clear them. The individual rooms in each stage are marked with either letters or numbers. Numbers tell how many waves of enemies wait within, while letters describe special rooms. Special rooms can contain a choice of parts, a special challenge or an optional boss. All three have the potential to yield valuable rewards, but the latter two can easily spoil an otherwise good run if rushed into. While getting sent to the “game over” screen means the permanent loss of one’s ship, the sting is lessened a bit due to the game’s overall length.

A successful run of Null Vector actually doesn’t take that long; it’ll probably take a competent player about twenty minutes to reach the end boss and watch the credits roll. With practice, that same player could easily reduce that time even more. This would normally count as a strike against the game, but clearing it the first is means to draw players in and encourage them to try again under different circumstances, and the overall short length compliments this. It’s easy to try-out new modes and difficulties when one doesn’t have to invest much time into a run. Those who stick around long enough to clear the game once are treated to the first of many difficulty modifiers which alter Null Vector’s combat mechanics. These modifiers can vary from boons like better drops to banes like tougher enemies, faster enemy projectiles or starting out with less HP. Between these and the randomly-assembled stages, there’s plenty of replayability and challenge to be found in Null Vector. It even features a shared-screen co-op mode that comes complete with a distinct ship for player two and no annoying collisions or friendly fire (though there is still plenty of kill theft). 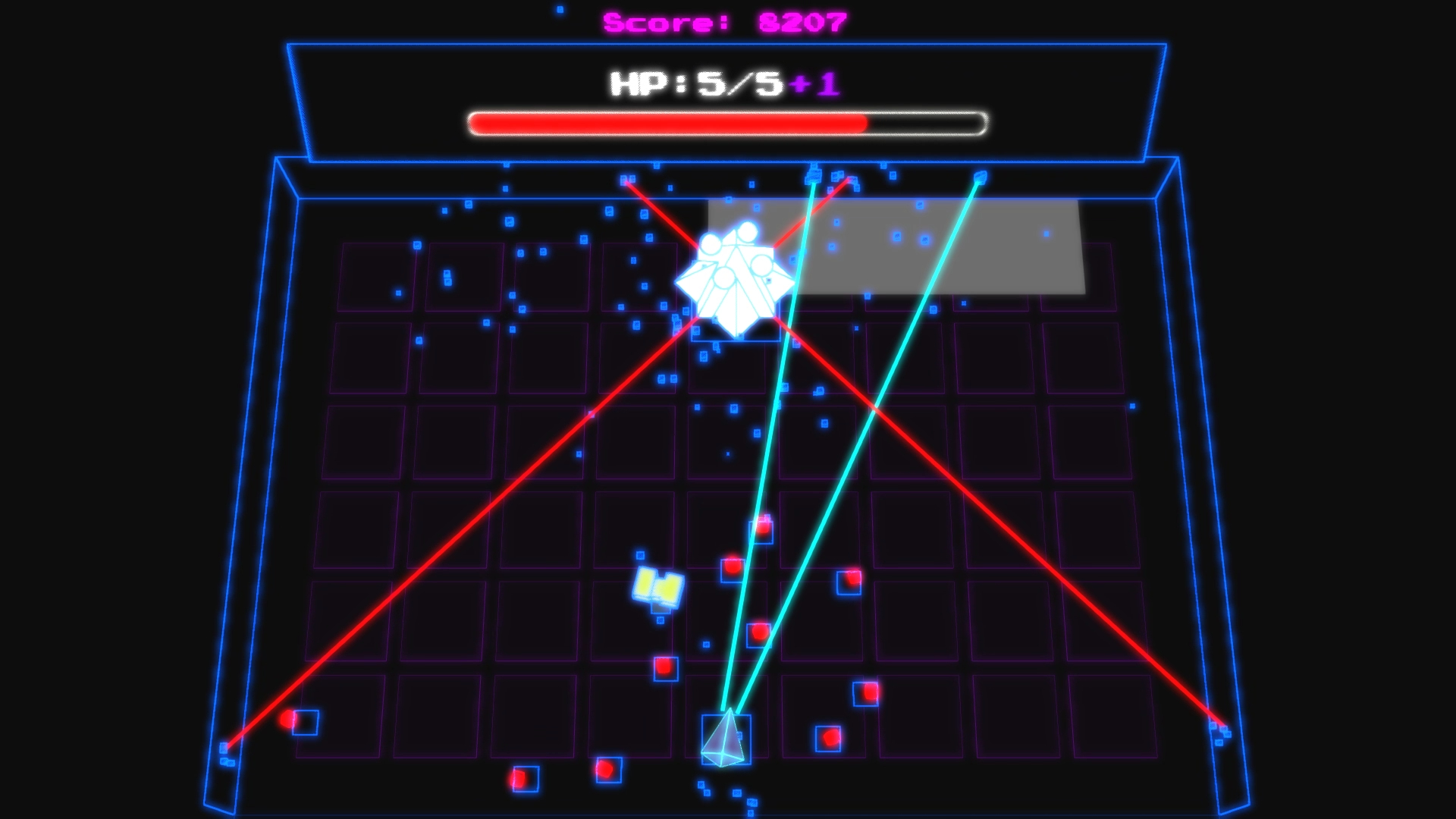 Null Vector successfully takes two distinct genres and blends them together in such a way that they feel like perfect compliments to one another. More musical tracks would be nice, but its overall presentation does a great job of calling back to the vector graphics of old without succumbing to their visual drawbacks. Its core loop of shooting, looting, upgrading and strategizing is genuinely fun, and its short run time makes it easy to keep coming back for more. It doesn’t work all that well with its default keyboard controls, but that’s an issue more inherent to the twin-stick genre than anything else. Once mapped to a proper controller, Null Vector is something new that twin-stick shooter fans should check out.