The late ’80s and early ’90s were a haven for beat ’em ups in both the arcades and on consoles. Arcades saw the rise of the genre thanks to Double Dragon, while consoles flourished with games like Streets of Rage offering up the same kind of action with their own twist. The genre’s very nature of having you battle a ton of enemies at once was perfect for the coin-op model, where continuing on cost you a quarter and you had a variety of ways in which to avoid spending money. You could either get really good at the game or excel at building up points in the hopes of getting a 1-up. If you were lucky, you’d get someone else to play alongside you and put the odds at least somewhat in your favor since the amount of enemies will stay the same whether you’re flying solo or not.

The Punisher was an underrated game in its time as it gave players a lot of the same thrills as the other brawlers of its day, but mixed things up in different ways too. The core combat still had you using punches and kicks the majority of the time, but longer-range weapons were also fairly commonplace. This one was of the more violent, but not gratuitously violent, brawlers out there with bloodshed, smoking thanks to Nick Fury and a lot of gunplay. Explosions were also conveyed with more visceral end results as you could see charred remains for a good long while too. For a genre that is naturally violent, it was nice to see a game embrace that side of things without going too over the top with it. 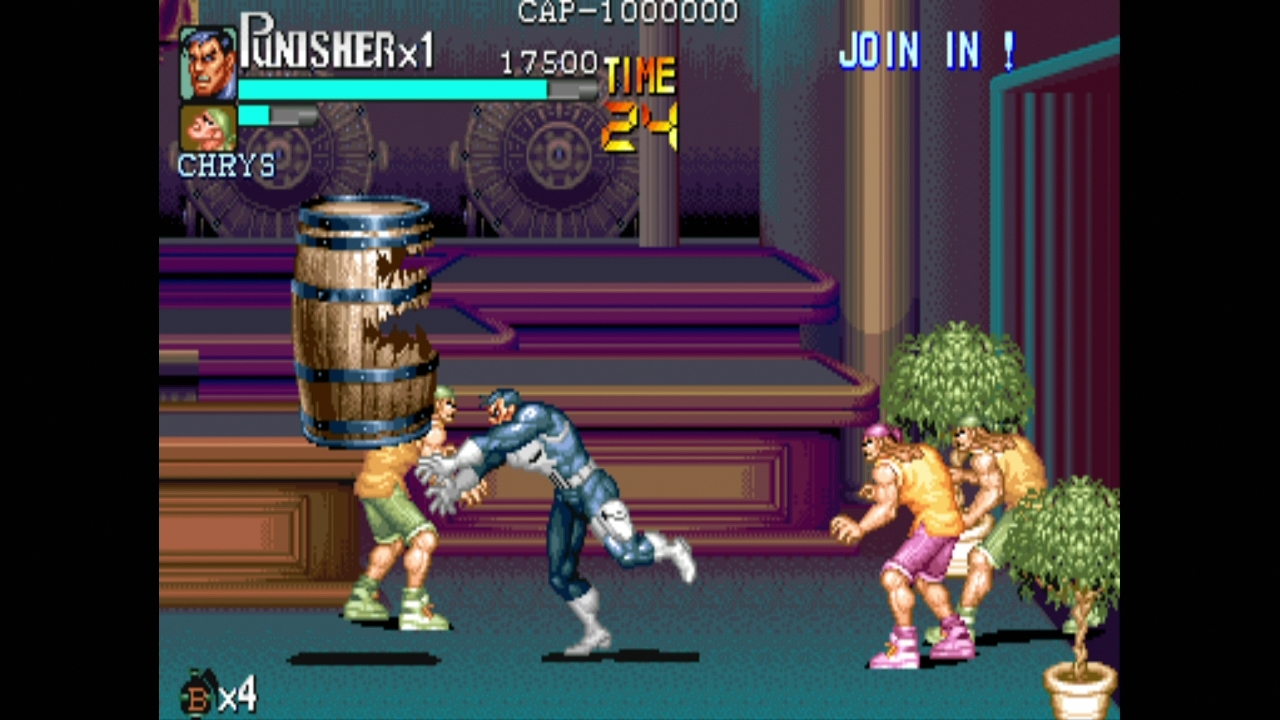 The game also provided a far greater weapon selection beyond just pipes and knives. Axes and flamethrowers give the game a more violent feel to it. While guns added a bit of variety, there was strategy involved to each type. A pistol was more common and did less damage per shot than a machine gun, but was far more accurate. With a pistol, you’ll lock onto enemies and guarantee a few hits in if you’re towards the center of the screen. As with all brawlers, being on the edges puts you at risk for being attacked by slightly-offscreen enemies, so being in the middle lets you survey the scenery and plan out attacks. Having a pistol allows you to clear out middling enemies and make way for bigger boss characters.

While those being such hit sponges, it’s usually a bit better to save machine guns for them. They tend to stay in a single area longer or at least stick around on a single plane. This means they’re more vulnerable to attacks that travel quickly, and fast-moving gunfire is just what you may need to conquer them in a swift manner. Their patterns are also some of the most predictable in the genre, which isn’t an altogether bad thing as it makes them easy to learn and allows you beat them with minimal lives being lost — so it actually feels rewarding to beat them instead of just being thankful a chore-like boss battle has come to an end. 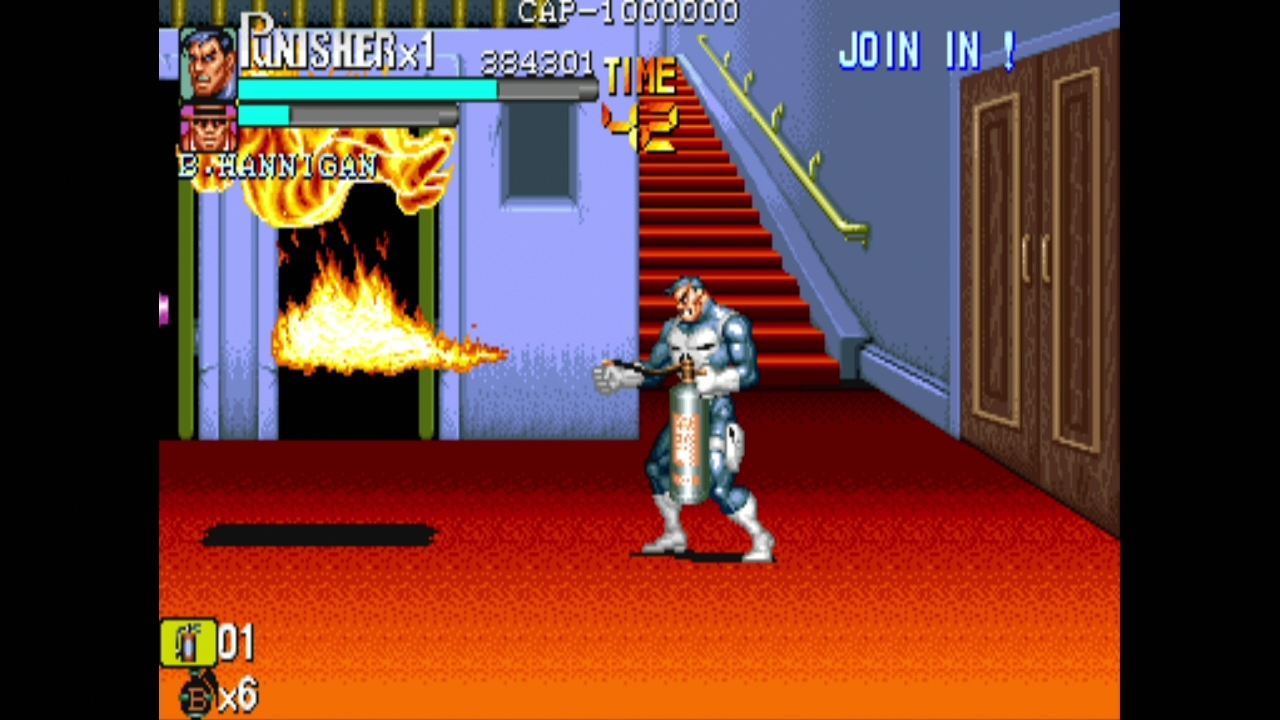 The Punisher’s faster than usual pace never gets overwhelming either. Boss battles are fun and the core combat is a blast too because enemies are spaced out on the screen far better than most games. Enemies don’t gang up on you nearly as much, and outside of boss battles throwing mooks into the fray alongside bosses, you wind up with a game that is always fair to the player to some degree. There aren’t many cheap areas, other than sections with empty pits you can be thrown into, but even those come with the caveat of being fun to use since you can toss enemies into those same pits and send them packing.

Visually, The Punisher stands out as an early ’90s arcade brawler thanks to its usage of a real-world setting. Having the game take place in locales like bars and pools wasn’t done a lot – as many of the arcade beat ’em ups used more sci-fi-inspired settings outside of the original Final Fight and Double Dragon. These games, however, were long-gone from arcades by the time The Punisher hit arcades and the level of detail in the worlds remains impressive. The character sprites are also thoroughly-detailed, with Frank Castle’s anger coming through in just his face as he always looks pissed throughout the adventure. 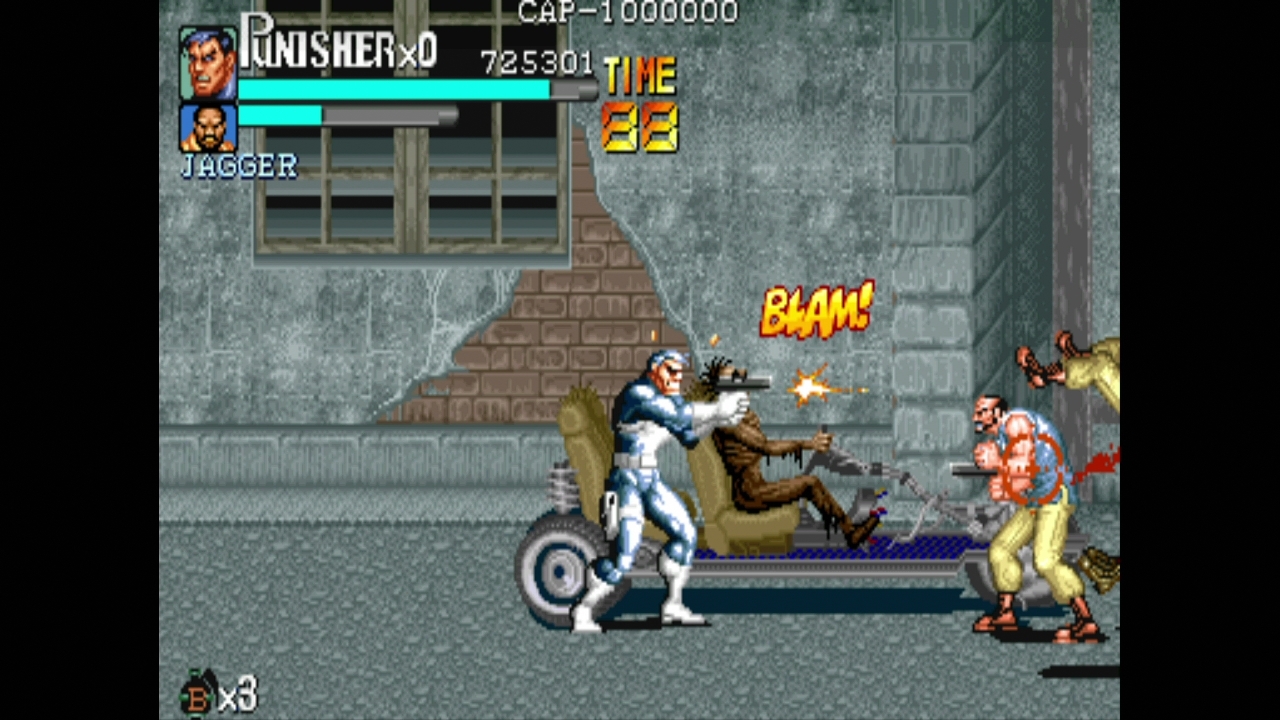 Capcom’s brawlelrs were known for having memorable soundtracks and The Punisher is no different. Its songs aren’t as iconic as Final Fight’s, but they do give the game an ’80s action movie feel with their layout. You could picture a lot of the songs here as background music in something like Die Hard and there’s even some usage of stringed instruments to build up dramatic confrontations at times. Beyond that, the sound effects are great with every punch sounding violent and gunshots varying depending on the gun and the enemy type hit. Landing a shot on a robotic foe will sound different than a human and it’s clear that a great deal of care went into the sound design as a whole.

The Punisher is an outstanding brawler and one of the better entries in the genre. It benefits from coming towards the tail end of its lifespan, so a lot of common issues that plagued other games aren’t here. It’s also greatly helped by Capcom’s development pedigree ensuring a high-quality product even if that didn’t quite extend to the translation which suffers from some iffy word usage. Fortunately, that kind of stuff adds a bit of charm to the final product, and unlike some high-quality brawlers like X-Men, this one actually did a console release around its release. In 1995, the Genesis received a port of the game, but it doesn’t look nearly as good and the sound has been greatly downgraded as well. It’s still better than nothing though and doesn’t cost too much. 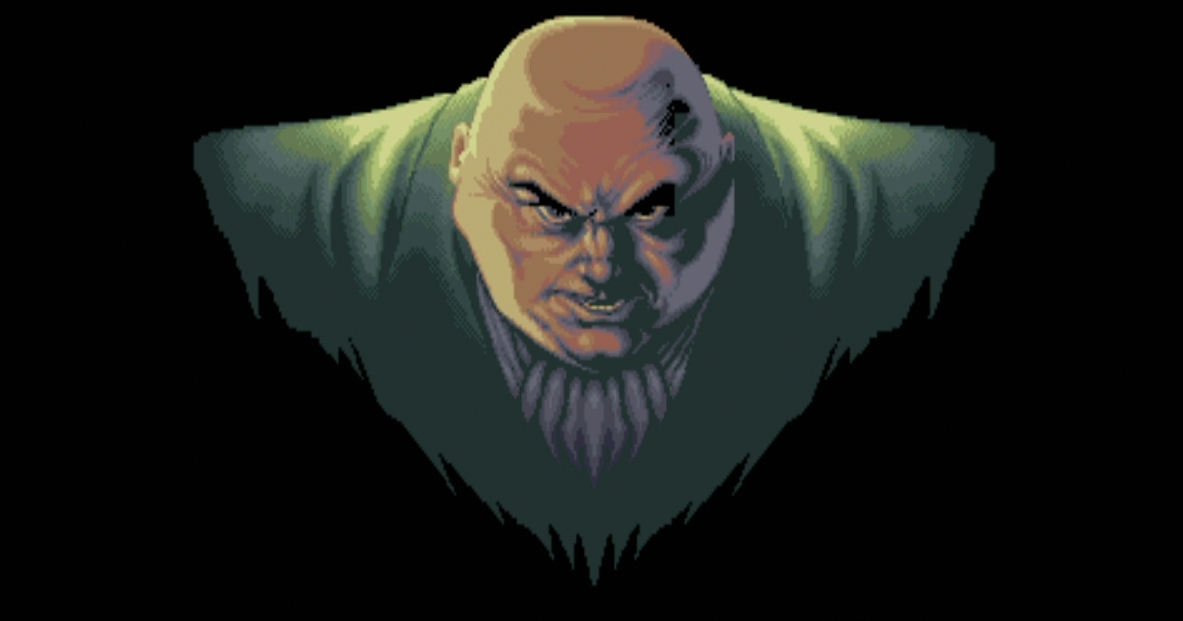