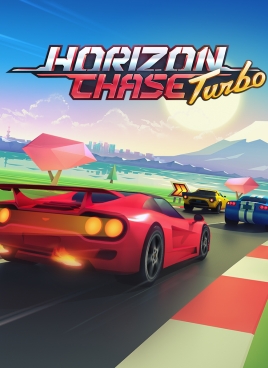 The original Horizon Chase was an incredible release on mobile devices in 2015 because of just what it brought back to gaming. For many years, arcade-style racers didn’t exist and while mobile OSes have plenty of racing games, they’re usually free-to-play games with counter-intuitive structures that encourage paying bits and pieces and aren’t focused on fun. Horizon Chase gave you a solid amount of high-quality content for free and then unlocked everything for a low price — so it was a lot better for consumers. It also allowed you to buy it on a phone or tablet and then play it on an Android TV device, but controller support was spotty and trying to control it with a remote control wasn’t ideal. Once you got a controller working, it was a great experience — but it still felt like the game was a rough draft given that it had some graphical glitches and a touch of input lag too.

Horizon Chase Turbo takes everything that worked about Horizon Chase and builds upon it to create the best arcade-inspired racing game since Outrun 2006: Coast 2 Coast over a decade ago. HCT wears its Outrun influences proudly and offers up the same kind of pick up and play thrills, but with more content to sink your teeth into. Unlike Outrun, this is a pure race against rivals with a goal to become top dog and win the race. Doing so rewards you with a sense of pride, while doing it for every set of tracks in a given area unlocks vehicles — something you can also do by performing well outside of just pole positions.

HCT incentivizes of all things a collect-a-thon approach to racing games that we don’t recall being done before — and it works shockingly well. Each track contains small tokens that go towards your final point total. Grabbing them all alongside a top finish gets you more points, which unlock special cars and makes unlocking other vehicles easier. There’s a risk/reward element too, however, to think about when it comes to the tokens. While they are placed on easy to see paths, the packed nature of the races with up to twenty racers on-screen at once means that you may not easily be able to grab them all. You can risk getting as many as possible in a lap, but wind up being hit by a few rivals and get stuck in the back of the pack. 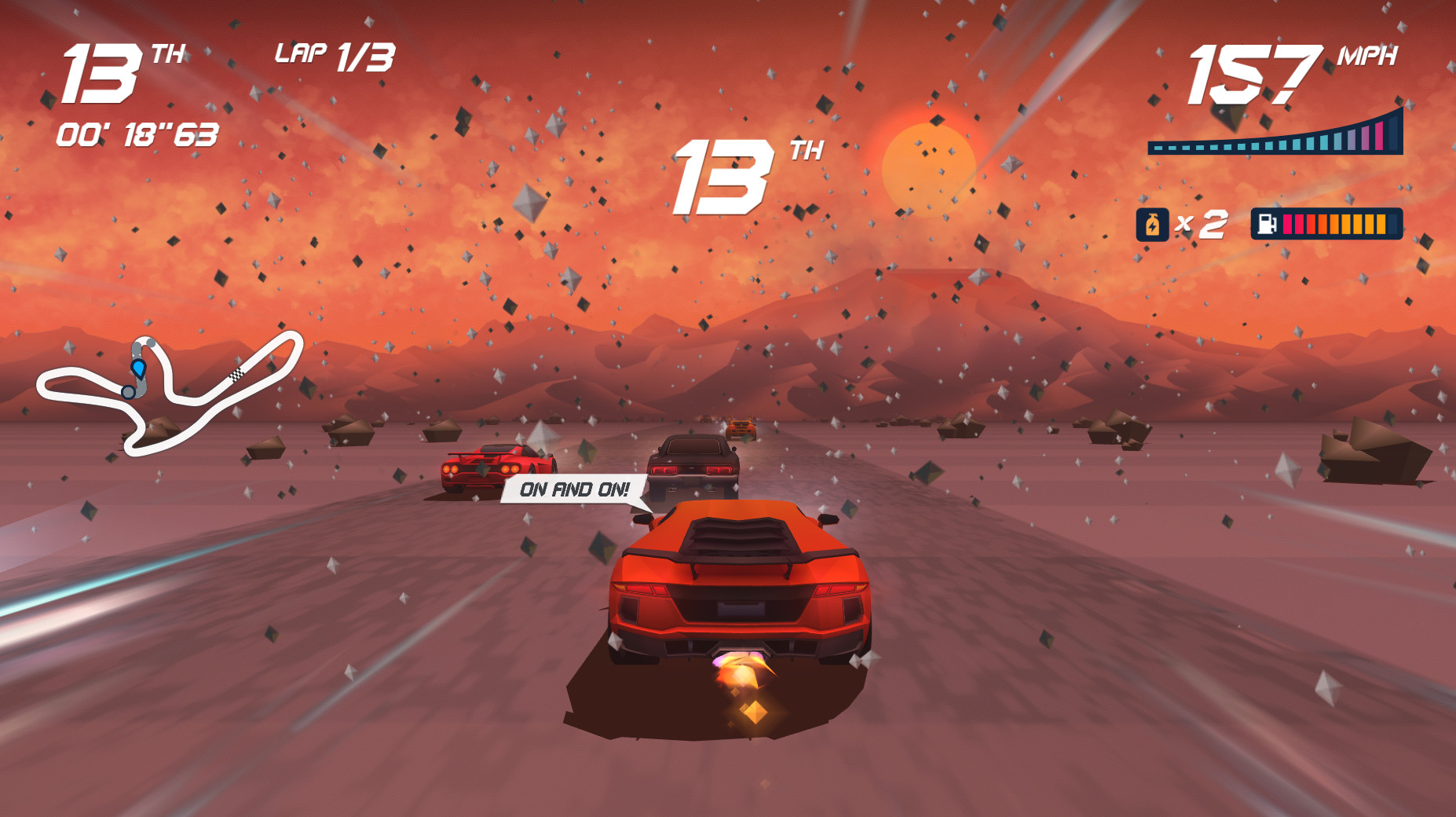 Should disaster befall you like that, or maybe you hit a roadside obstacle, you do have a few chances to catch up. Beyond drafting behind rival cars, there are three turbo boosts to work with. Some tracks litter a bonus one, but no matter how many you have, you need to be careful with them. The key to every boost is to ensure that you’re using them not only when the timing is right when it comes to traffic flow, but also keeping track position in mind. If you’re nearing a corner, using a turbo might slingshot you past a few rivals — but it’s very risky. Doing that gives you a higher chance of smashing into a roadside object and eliminating any advantage you would have gained. Similarly, trying to dart through a cluttered pack of six cars is thrilling — and all the more heartbreaking when you get past five of them only to have the sixth dart in your path.

Events like that are just some of the reasons why every race in Horizon Chase Turbo is exciting. It starts off with you wanting to properly time your acceleration so you can get a bit of a boost and then becomes a never-ending battle until the end of the race. Enemy racers will bump into you to succeed and every bump you take has the chance of sending others ahead of you. Bumps to the back or front of the vehicle should be avoided at all times, while shots to the side will slow you down — but won’t impact you as much. This means that while you do want to race with speed, you can’t sacrifice precision. You’ll be threading the needle through several cars at once multiple times per race and it’s thrilling each time you pull off that perfect pass.

Having such precision would be a nightmare without spot-on controls, and thankfully, Horizon Chase Turbo delivers the goods there. Using an Xbox One controller for the PC version feels ideal — much like how the Android version felt with an Xbox-like controller thanks to the triggers working perfectly to control your speed. If you so desire, a digital-only setup is possible using either the d-pad or face buttons to control your acceleration and braking à la older Gran Turismo games — but the game excels with a more thorough control setup of sticks and triggers. Controls are responsive and the default button layout is logical and easy to use. 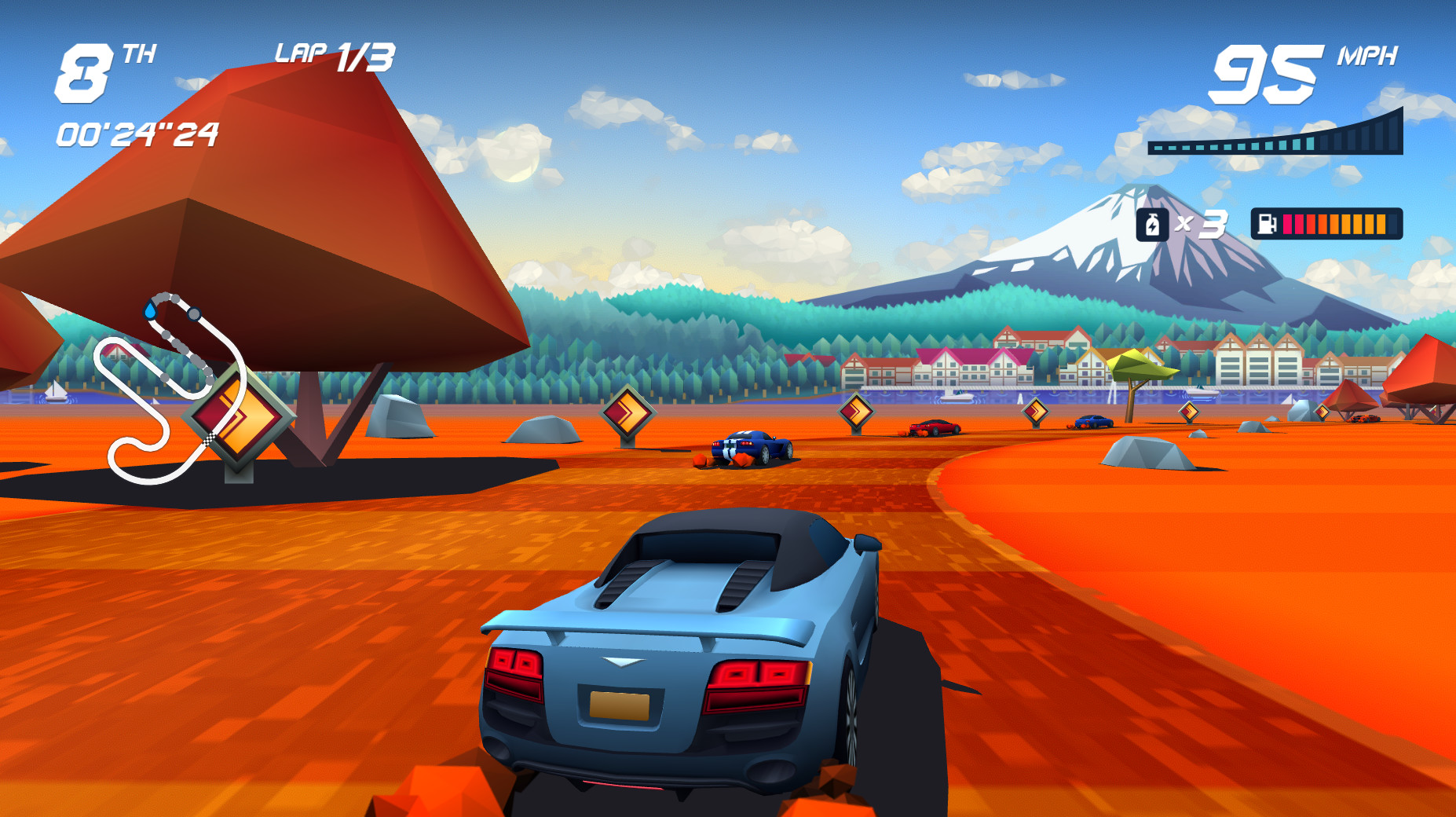 Horizon Chase Turbo keeps the same minimally-shaded look from the first game and expands upon it perfectly. This visual style isn’t for everyone, but in keeping the graphics on-track so similar to the 16-bit era’s tile patterns, it allows it to evoke the past while still looking like an appealing modern-day product. The environments themselves have lush trackside details, much like the Outrun franchise, with each track standing out from one another thanks to both that and a fantastic use of color for different times of day. Night time races feel more chaotic since you have less light to work with and have to rely on taillights and headlights alongside lamp posts to see where you’re going. Similarly, some tracks are affected by fast-moving snow or dustups that make navigation tough if you don’t think things through. Making use of the on-screen map is a must and allows you to combine your ever-increasing skills with the map itself to find your way around trickier maps.

The sound design is also strong — with a catchy soundtrack that gets your blood pumping. All of the music is designed to sound like something you could hum along to in an arcade game, but with far more depth to the composition than was possible in the 16-bit era. This holds true for things like the snowfall and dustups as well, which sound realistic and add a bit of terror to the racing action. Surrounding cars also add excitement thanks to the sound of their engines roaring around you — but it never gets overwhelming to hear so many things going on at once. 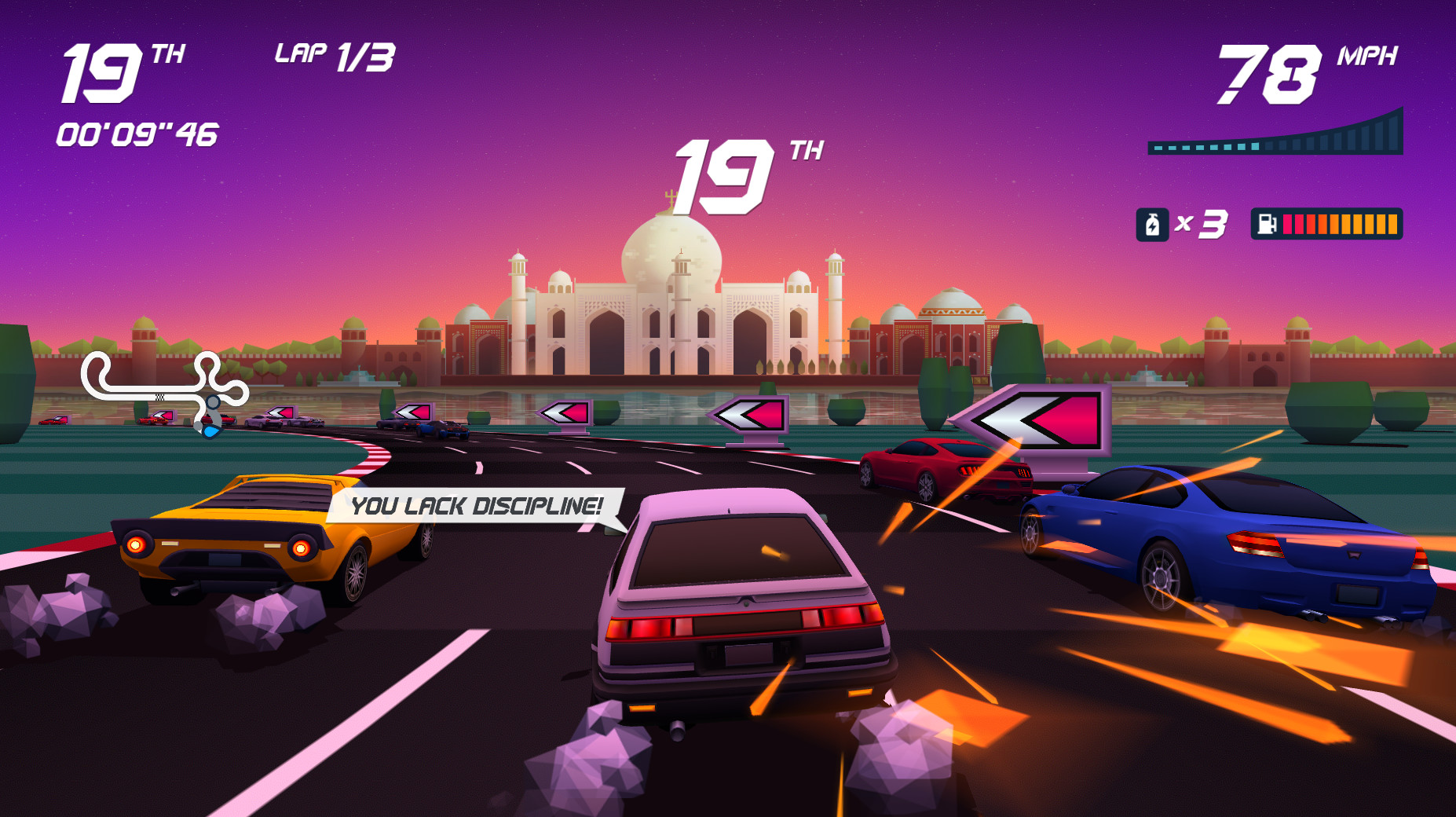 Combining the same kind of fast-paced fun that worked so well years ago with a picture-perfect progression model, Horizon Chase Turbo is exactly the kind of arcade-inspired racing game the industry has needed. Doing well is rewarded with a slew of unlockables and doing poorly is never punished. It’s a forgiving game and one that provides a high amount of high-quality content. The addition of tournament and split-screen local multiplayer modes to the action give it a ton of replay value as well. Anyone seeking an arcade-style racer should give Horizon Chase Turbo a shot — you won’t regret it.