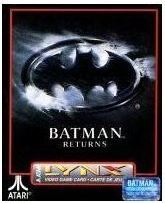 Most people associate Batman Returns with the 1992 Tim Burton film where the caped crusader has to deal with Penguin and Catwoman. What does not immediately jump to most people’s minds are the numerous video game adaptations that were spawned as a result of the film’s popularity. At last count, there were nine games released in 1992 and 1993 that were named Batman Returns, and the title is basically the only commonality. These were different games with different developers and publishers, and naturally different levels of quality. With so many different Batman Returns games floating around, two of them made it to the relatively new handheld market on two long dead systems: Sega Game Gear and Atari Lynx.

The Atari Lynx is not a console that is brought up often in conversation even among people who were actually playing handheld games in the early ’90s. Nintendo’s Game Boy was the obvious champion, as they still dominate the handheld market to this day. The Sega Game Gear was the closest portable system to dethroning Nintendo and we all know how that ended. The Lynx had less than 100 games released between 1989 and 1995. The limited number of available games compared to other handhelds likely contributed to its relatively low sales despite being a technically impressive piece of hardware, but a few of its titles looked impressive for the time, one of which was Batman Returns.

Developed and published by Atari, Batman Returns was a sidescroller where players would don the cowl and rid Gotham of the Penguin and Catwoman. The game itself is short — only four levels — and could be finished in under a half hour if the player was good. Like many old games, the short gameplay is extended by having an extremely high difficulty. Batman will have to fight his way through Gotham city to eventually put a stop to Penguin, and he will encounter several familiar faces from the movie, such as clowns on motorcycles, street performers and actual penguins equipped with rocket launchers. The cops are also trying to take the pep out of Batman’s step, but thankfully his plastic molded muscles are impervious to bullets.

The graphics are impressive for a 1992 handheld game with large characters occupying the screen. The scenery and character designs do a good job of referencing the movie, though Danny Elfman’s memorable score has been replaced with generic synthesizer-heavy soundtrack. Mindless charging into battle fighting everyone is a fast track to an early bat grave. Instead Batman needs to take advantage of his surroundings, taking higher paths above the greater danger on the ground. Short, straightforward and filled with cheap deaths, it’s questionable how well this title will hold up to someone playing it for the first time today, but once upon a time this was considered impressive. 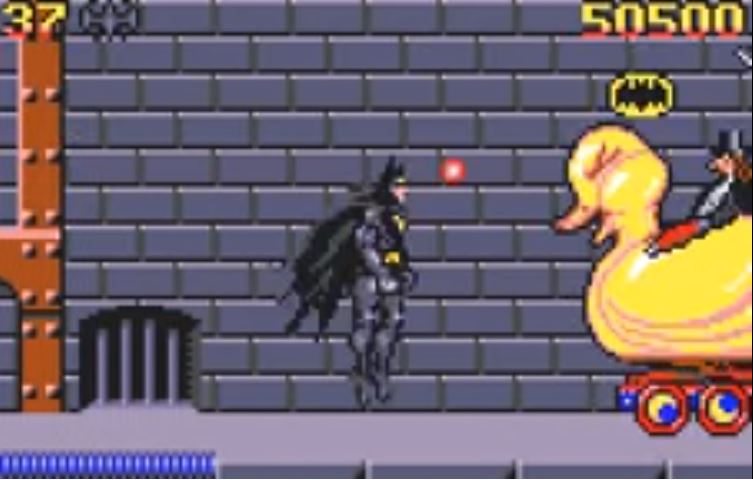 The Game Gear Batman Returns was developed by AspectCo Ltd., and despite looking inferior to its cousin on the Lynx due to hardware differences, is actually the better game. This time there are five levels instead of four, but there is much more level variety since there are different routes in the first four levels. Route 1 is generally the easier route and a bit more straightforward with its platforming. Route 2 is the more difficult route, and this is where Batman has to rely more heavily on his grappling hook to swing across large sections of the level where there is no floor, which brings up the question that is constantly asked when playing 8-bit and 16-bit platforming titles which is who in the world hired these architects?

The gameplay holds up much better on the Game Gear Batman Returns than on the Lynx version. The level designs are more fun to travel through on either path and the fact that there are branching paths greatly enhances the replay value. The Game Gear version is challenging but is more forgiving than the Lynx title that has a tendency to feel too cheap. Using the grappling hook to traverse the areas above Gotham makes the title feel more like Batman and just offers some general gameplay variety. The soundtrack on the Game Gear is more varied, less generic sounding and overall better composed than the accompanying music on the Lynx but still lacks the music of the former Oingo Boingo frontman. Perhaps he was too expensive for the studios working on these games. 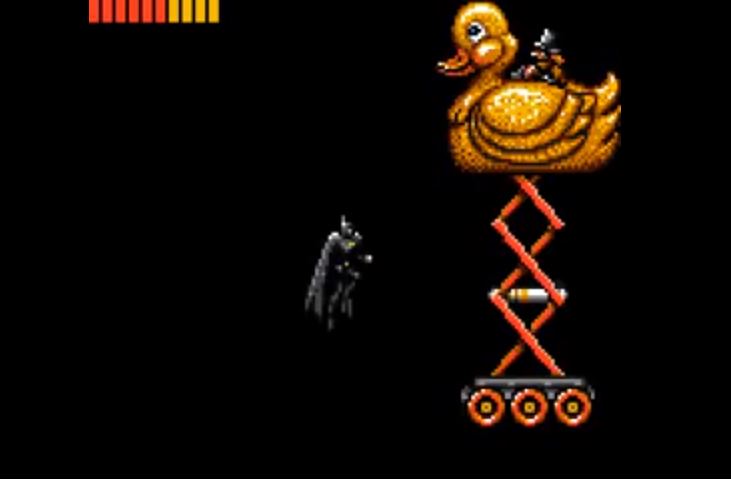 Games based on movies were incredibly common in the 8-bit and 16-bit era, but good games based on these movies were quite rare. Batman Returns fared rather well in this regard all things considered, even though trying to keep track of all the games named Batman Returns can be a daunting task for anyone’s short term memory. The Atari Lynx version was mostly impressive for its visuals at the time and is worth checking out for people who enjoy short action games that extend their play time with excessive difficulty. The Game Gear version is a well done 8-bit platforming action game, and if we can look past the dated graphics, there’s a solid game to experience, especially considering it’s a game licensed from a movie.