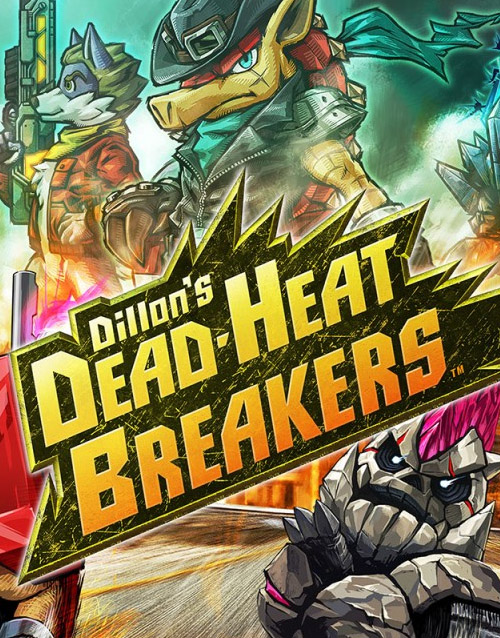 Dillon the armadillo first appeared in a fairly small title known as Dillon’s Rolling Western back in 2012. Players took control using the touch screen to steer and attack with Dillon as he fought off giant grock enemies and protected towns with action and tower defense elements. A year later, he saw an expanded storyline with The Last Ranger which introduced a handful of new mechanics, but was mostly similar in all other aspects. Now after nearly five years, the rolling armadillo is returning once again in Dillon’s Dead-Heat Breakers with a familiar yet fresh new take on the action strategy gameplay.

Dead-Heat Breakers begins with a mii chosen by the player and becomes their avatar as an Amiimal. After remembering the escape from their home village in a huge truck, they come back to reality only to be surrounded by enemy grocks looking to tear their truck down. They honk for help, and hopefully Dillon and his companion Russ are nearby to help take them down. After saving the Amiimal, everyone is introduced and learns of the village that is now covered in a nearly impenetrable shield which require the team to construct a special machine in order to break through it. Fortunately Russ is smart enough to do this, but it will take quite a bit of grock parts to make it come together so the team decides to go out on missions saving nearby towns while collecting the goods they need along the way. Those familiar with the previous titles might notice the shift in scenery as Dead-Heat Breakers steps away from the wild west in favor of a more sci-fi apocalyptic wasteland. This works well given the improved technology the people of the world are given to fight with, and transforms it into even more of a Mad Max inspired look than ever before.

The basic premise of gameplay is a mix of tower defense and hand to hand combat. Every day there is a new town in danger, so Dillon and company head to the nearby hotel to hire some gunners they can take with them. The gunners come in three main varieties at the beginning: slow long-ranged cannons to deal high damage, medium-range turrets to deal quick but low damage and the short-ranged shotgun to pick off enemies that get close enough. Deciding which to take into battle is a major deciding factor in how the combat will go and fortunately Russ will offer some tips on who to pick. Players can view the upcoming map to help them get an idea of how these gunners can be set up while getting a feel for how to approach it when combat finally begins. After hiring the Amiimal gunners and purchasing any extra upgrades or items, the team heads out to the town in need. 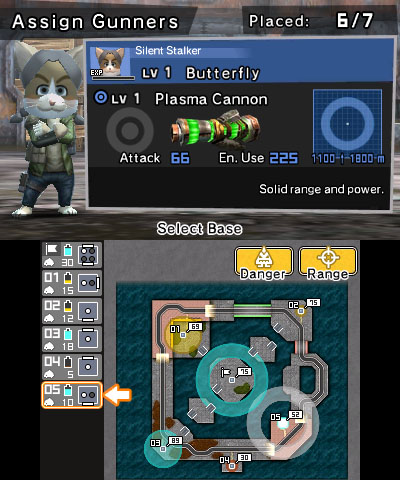 Once in combat each gunner must be placed in a tower. The map on the bottom shows their range of fire which helps coordinate how to set them up to be the most effective. After setting them in place Dillon can give some of his metal items to the bases in order to strengthen their doors if he’s found enough of them. Finally after all that is settled, the roaming begins. An average battle has four rounds, the first has no enemies as players take control of Dillon. His main mode of transportation is rolling, to which he will begin to do around the map gathering items and charging up the gun posts. Along this traversing through the area he can also gather scruffles to increase the scrog count, which acts as the life of the village so getting more essentially increases the amount of damage that can be taken before losing a round. The second round of battle is the last time Dillon can deliver items and is much shorter to prepare before grocks finally start appearing. Finally in the third round grocks begin falling from the sky leaving it up to Dillon and the gunners to stop them.

Dillon will need to race around the field and charge into enemies in order to engage in a fight. Once there, he fights a number of enemies in a small field which he must defeat using rolls and claw attacks before the grock is destroyed and he can continue. The Amiimal character can be called into battle to assist or told to travel anywhere else on the field to engage in combat alone. Large boss grocks in these fights appear as one large entity with lots of health, but they slowly try to make their way to an exit to stop the fight leaving Dillon to try and defeat them as quickly as possible. Once a good number of enemies has been defeated, they will change into their final form and begin the fourth round. All grocks take on the shape of cars and Dillon must chase them down while ramming into them to destroy them before time is up. If time does fully deplete, the grocks will transform into even more powerful forms that will be much more difficult to take down. 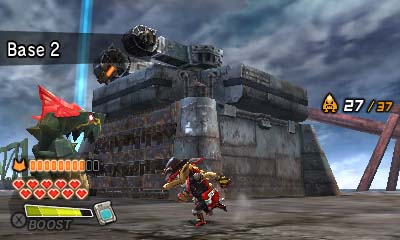 After the battle is over, gunners will gain experience from having fought alongside Dillon and even level up which often awards stronger weaponry for them in the future. There’s no guarantee the same team of gunners will show up again, but one from the last battle can be selected to show up next time. The head of the village will reward Dillon with an item or money before returning back home. Once there the Amiimal visits Weldon to sell monster parts and exchange the ones necessary for parts. Going back to the hotel will let the Amiimal sleep for the night, and begin the next work day.

As there’s no villages in danger during the day, it’s the perfect time to earn money for the next fight. There are a variety of options available for money making in the form of mini-games, the first of which is the grocery store. After selecting three items to stock on shelves, the Amiimal must make sure things stay organized while also running the cash register and making sure to charge the correct amount. Selling out of an item gives a bonus at the end of the day and the store will gain experience every time they work there making it a more popular place for the other Amiimals to shop. The second area to earn money is the recycle center where players must sort the good and bad items as they go down conveyor belts at increasing speeds. Finally there is the Hyper Arcade, where the Amiimal takes their gun in hand to try and earn a high score against computer enemy grocks in virtual reality. The last way to earn money appears every couple of days and has Dillon taking the lead again in races. He doesn’t actively race against other characters but instead is rewarded in first, second or third based on his time at the end of three laps. 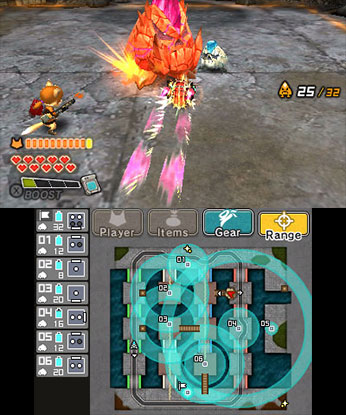 Occasionally a strange looking animal by the name of Otis will stop by asking for help to protect his mines from oncoming grocks. Defending the mines works nearly identically to the towns with a few exceptions, the main being there are no scrogs to protect. In the mines no gunners can be placed on the main building, making it vulnerable to grocks. The mines are typically a little more challenging, but offer good rewards for completing successfully. The mines are also the only levels which include unmanned gun towers. Unlike the other towers, the unmanned ones are powered by money which is drawn from Dillon while he charges them up. They’re not necessary, but will help in the fight and usually don’t cost too much to have up and running.

One of the most endearing aspects while exploring the main town is how alive it feels. Talking to townsfolk can give more backstory on Dillon and Russ or just reveal some of their hidden fanboys among the animals there. There’s also a scrog farm which is a relaxing little area where players can watch the pig-like animals sleep, walk around or even feed them bread for a little bit of money. These are delightful details that build up the city as a working society and makes it feel all the more important to protect the villages around them. It’s especially pleasant to see included after the previous Dillon titles didn’t have much of a world to explore and simply hopped from one mission to the next. 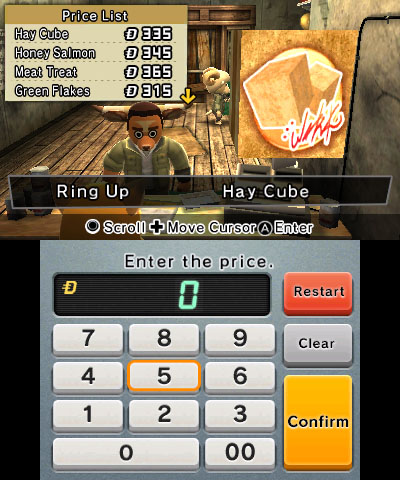 As one might think, five years can often do a lot in improvements for a series. The previous Dillon entries were much smaller in comparison but still looked great for the system, but it’s amazing to see just how lovely the latest entry is and how much that can really change given a few years. Prior to Dead-Heat Breakers, the main method of controller Dillon was using touch controls but this was taken out in favor of simply using the A button for all attacks. The soundtrack might not be incredibly catchy, but each song is delightfully fitting for the most tense or relaxing of situations. Those who use the 3D functionality on their systems will also be pleasantly surprised that it is a feature in Dead-Heat Breakers with a lovely amount of depth added to the world when used.

Although Dead-Heat Breakers does give a lot more breaks between fights, they can still feel a bit repetitive if played over a longer period of time. This entry does a much better job of making each map feel truly unique and make strategies differ quite a bit, but levels do end up revisited further into the story with some harder enemies to fight. Combat can seem simple, especially early on as fights tend to be a hack and slash to win, but eventually does add some more complexity that is well worth continuing through in order to experience. 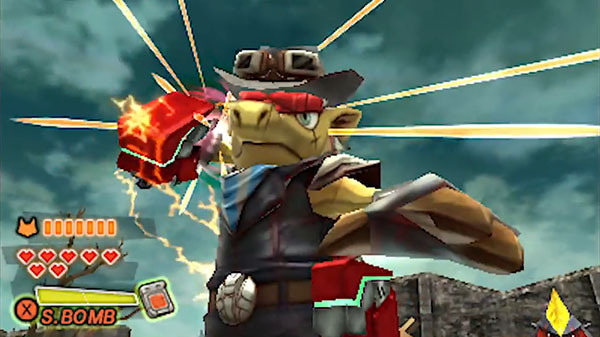 Dillon’s Dead-Heat Breakers is easily the finest the series has yet to offer players. It does away with the clumsy touch controls while offering more variety in gameplay and streamlined battles that perfectly fits the new approach. It’s a wonderful entry point for new players while returning ones will be able to immediately jump in and learn everything new it has to offer. What it lacks in variety for combat it makes up for in strategic challenges, where not paying attention for a moment can be the difference between defeat and victory. Anyone who enjoys tower defense or strategy action titles should consider picking up the wonderful take on the genres that is Dillon’s Dead-Heat Breakers.