It’s been an established mythos that great art can come from great pain. Van Gogh painted his greatest works while in emotional torment, Kahlo’s physical and emotional pain are subjects of her most recognized works, Lennon and McCartney forged their creative partnership following the death of their respective mothers. Matthew R. Walsh, of Logic Nine, poured his heart, soul and pain into Nothing: a third-person, open world cyberpunk RPG set in a dystopian Los Angeles. In his own words in a Reddit post, Walsh says that the sudden loss of both his best friend and mother to a rare cancer thew him into a self-destructive depression from which he thought he would never recover. To honor his mourning, he used his creation as an outlet for his grief. Drawing from personal experience, Walsh created a protagonist with a backstory similar to his own. His character is also a successful software engineer who is very close to his mother and, when tragedy strikes, gives up everything to save her. 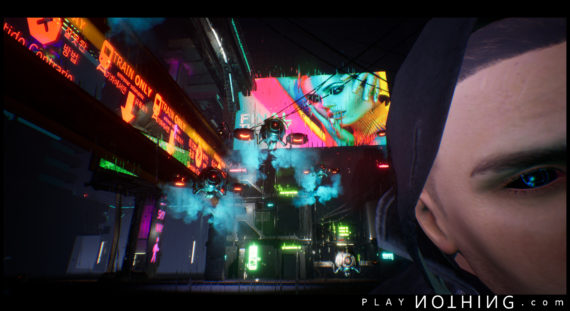 No cyberpunk game is complete without lots and lots of neon.

Using every possible resource, Walsh has built Nothing from the ground up. Using his pain as  motivation, he wrote, sketched and recorded everything for the game. He has personally hired artists, actors and musicians by digging into his own pockets. With close friends and family at the helm, it’s obvious that the game is “Nothing” but a labor of love. Walsh has stated that his team is close to producing a trailer and that a beautifully haunting dystopian soundtrack teaser created by Ron Wasserman (yep, Go Go Power Rangers Ron Wasserman)  is available for a listen. Additionally, initial details for the game promise a meticulous RPG for fans of the genre. In the year 2108, players can drive motorcycles, fly cars, hack systems, hack brains and a myriad of other abilities in order to control the future. Walsh promises twelve possible endings and a plethora of side missions. There are zero building facades which mean that if you can see it, you can enter it. Underground sewers, tunnels and other environmental elements add more depth to the world. Upgrade your protagonist with cybernetic augmentations, in-depth crafting systems and tons of personal and vehicle upgrades. More than anything, Walsh is committed to a story-driven adventure that will challenge your emotions. Currently, there is no release date information other than 2019. Walsh hopes to have a small showing at this year’s E3 and plans to set up a Kickstarter soon for release on PlayStation 4, Xbox One and PC.