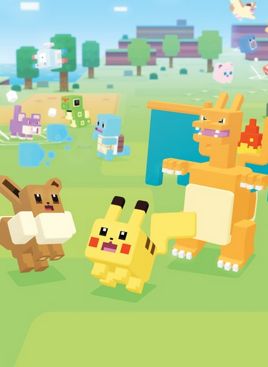 While a Pokémon title had been rumored quite a while before the official reveal of Let’s Go, one thing that came completely as a surprise was the free downloadable title, Pokémon Quest. This title was featured first in Game Freak’s reveal at the end of May and caught people by surprise. Although it was immediately overshadowed by the next reveal, Quest came as a free title for those with Switch consoles to download immediately to try out. While the series may have mixed reception when it comes to their free titles, this time it’s a look into Game Freak’s very own first take on a Pokémon spin-off.

Upon starting up Quest, players enter their desired name and find themselves on their way to a mysterious island only known as Tumblecube. Once there their initial goal is to uncover hidden treasure, that is before their trust robot companion known as Moovee IV begins to act up because of some mysterious interference on the island. They come to discover that Tumblecube is filled to the brim with Pokémon and find a small group nearby where one can be selected as a companion. After exploring through the area they set up camp and decide they should try to uncover the mysteries of Tumblecube while still trying to find any hidden treasures along the way with the help of their friendly Pokémon pals.

After choosing a companion from the iconic starters of generations 1, they are immediately thrust into a level where the gameplay begins. At first glance, it can appear similar to the Pokémon Rumble series but is simpler while also carrying some depth to it. Pokémon move and use their basic attacks on their own, with the Player given the option to use one of their special attacks whenever it’s available. Companions need no guidance and will automatically continue without any input making maps go by quickly. At the end of each stage, a much larger boss Pokémon is encountered with increased health and attack power that needs to be taken down. After a successful mission, the team celebrates and collects any items they picked up along the way. While it’s simple, combat does have strategic elements to it. Learning how a Pokémon attack will work is necessary, as if they are too far it won’t land or may sometimes be disrupted by the nearby terrain. Most moves will destroy a good amount of terrain like trees and some rocks, but picking the right move setup for battle is what can determine a loss or defeat. 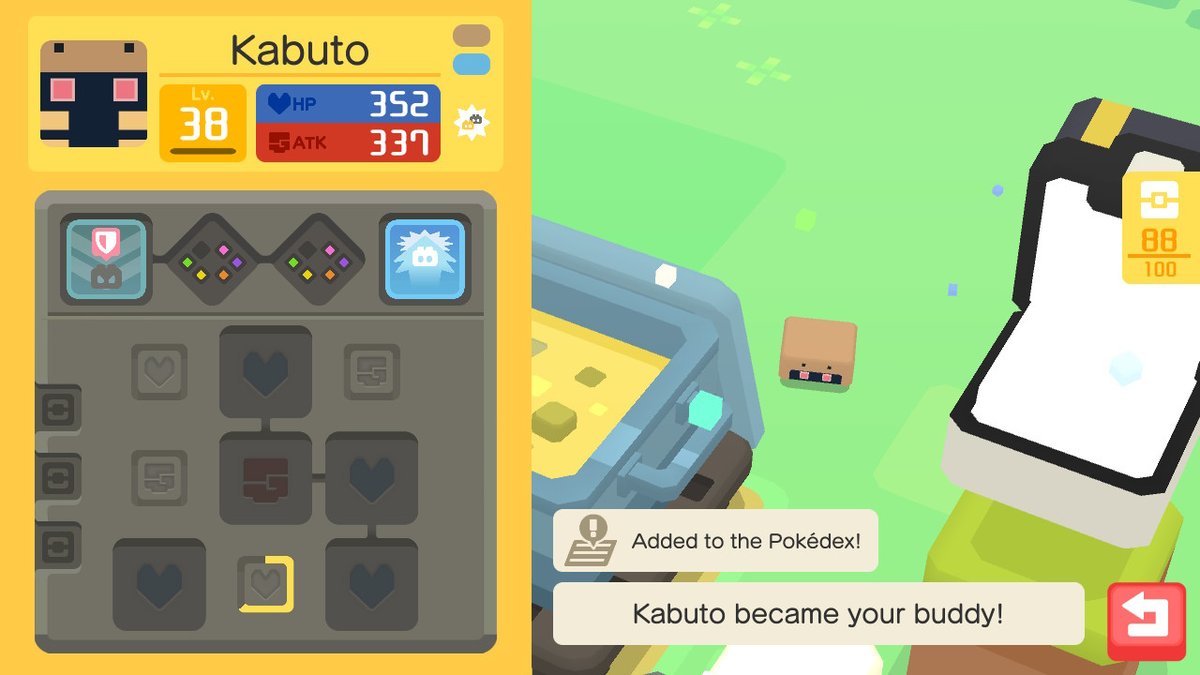 There are two main components to getting by on Tumblecube Island: training up Pokémon and befriending more of them to join up. Training is straightforward, simply going into a level and finishing it to gain experience. Befriending on the other hand works differently than any Pokémon title before it. There are no poké balls and no capturing mechanic at all, but instead a camp where the player can cook up a stew. These stews are made with the variety of ingredients received from fighting wild Pokémon that come in red, yellow, blue, grey and rainbow colors. Each of these has a taste, texture and type which can be used to craft a variety of different kinds of stews. Depending on the stew that is created, different kinds of Pokémon will appear and be immediately befriended. Meeting lots of Pokémon is important too as certain types will give advantages on stages that are extremely necessary for difficult challenges.

Aside from leveling up, Pokémon can also be strengthened with the help of Power Stones. These are found randomly while battling and can be placed into the unlocked charm slots. Each slot can boost either attack or health, and every Pokémon will vary in their available charm slots, making them important to stand a chance in high-leveled areas. The combined stats of up to three Pokémon that are chosen to adventure will determine the overall team strength. As each area has its own level of difficulty, it’s easy to gauge what strength a team should be at before progressing or otherwise be in a bit of a mess against stronger enemies. Fortunately every area also gives boosted strength to one type of Pokémon, so having one or multiple on the team will increase the overall power when heading in to fight. Move stones can also be unlocked through gameplay and instead of attaching to the charm slots will be connected to their moves. These move stones can increase the overall effectiveness of attacks by giving them a wider range, boosted ability or even a shorter wait time before use. 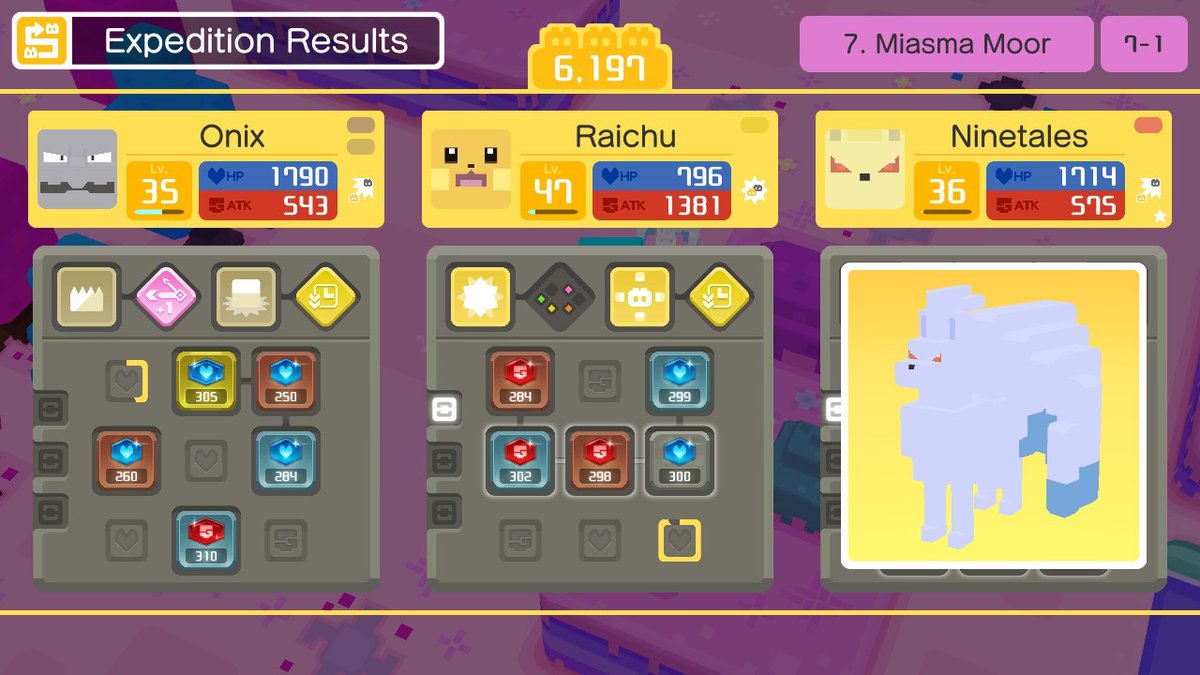 In Quest, Pokémon can only have up to two special attacks to use in battles. When a Pokémon is befriended it will have either one or two attacks, making each one a bit of a random chance. Every Pokémon has different attack pools that they are a part of which determines the attacks available, but if a Pokémon comes in with a rather weak or useless attack, it can be changed. Pokémon can be trained in both level and moves, which requires using others to make this change. This is the easy way to get rid of extra Pokémon taking up space, while also giving those being kept a nice bonus. Up to four can be selected to help change attacks, with the same type increasing the chance higher than others. Moves can be changed infinitely, but each change lowers the subsequent attempts, making players need to consider how many times they want to try instead of simply trying to lure another. Shiny Pokémon also appear in Quest and fortunately aren’t tied to any particular recipe but will appear randomly just like in the core games. One of the great changes to the formula is no longer requiring trading or stones to evolve, but rather all Pokémon evolve simply by leveling.

As with many mobile titles, Quest features a variety of challenges that can be completed for rewards. This includes recruiting certain kinds of Pokémon, completing levels and even simply making certain stews. The rewards are well worth it too as many include the PM Tickets which are used as currency, in addition to some of the larger and more potent ingredients used in stews. Most of these will be completed naturally while playing, but can make for a nice focus when looking for a way to progress quickly. There’s also a good amount of difficulty for anyone looking at Quest thinking it will be a walk in the park. While it starts out simple enough, it ramps up quickly and begins challenging the player to strategize. Going in with strong moves might sound clever enough, but the buffs and debuffs from attacks can be powerful or deadly when not properly prepared for battle. Early levels might be a bit of a cakewalk, but later on puts strategy to the test in defeating tougher bosses. 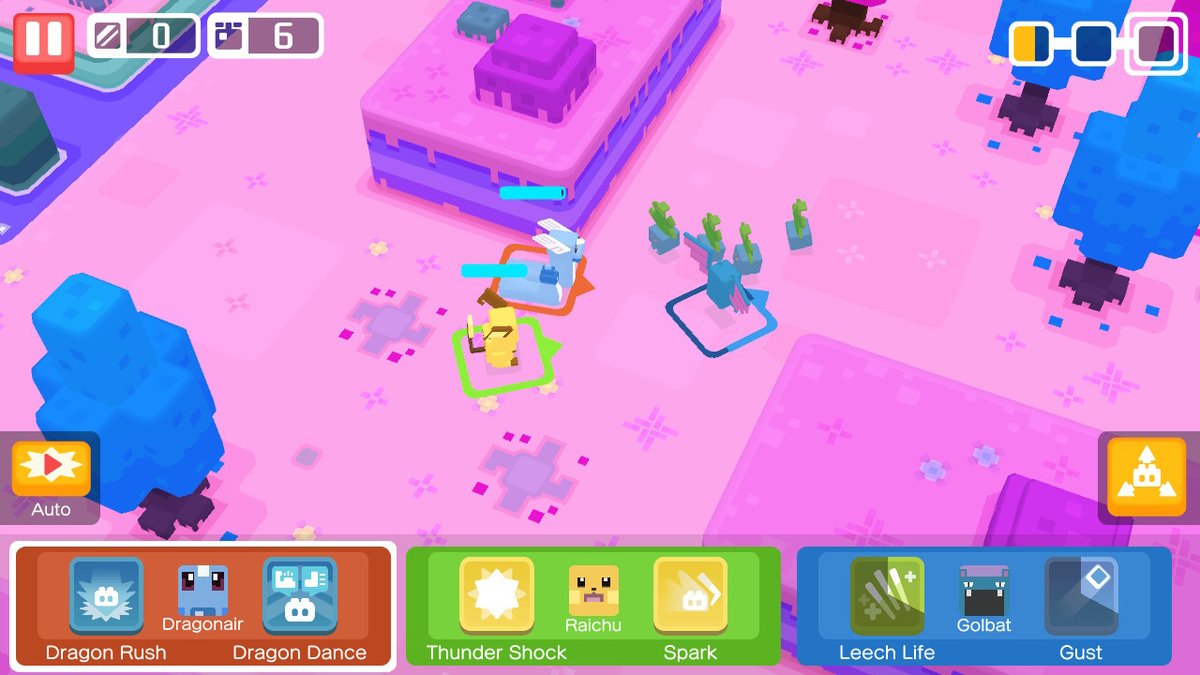 While it was different when it first appeared, Quest’s art style is endearing, as everything from the Pokémon to the natural surroundings is made out of every so slightly rounded cubes. The stylistic choice makes everything stand out and pop, with many Pokémon becoming even cuter or more exaggerated in a wonderful way because of it. One surprising aspect to Quest is just how simply enjoyable the soundtrack is. Tunes are catchy and never become dull because of how lighthearted and upbeat they are. Each area has their own tune and atmosphere, which makes traversing through them multiple times still feel fresh and enjoyable. One of Quest’s biggest flaws in repetition. There’s a lot of grinding needed in order to progress and it can grow tedious fighting in the same levels over and over to get stronger. While it’s possible to summon stronger Pokémon from stews, there’s never a guarantee to get a certain Pokémon or that they will be strong enough for what’s needed. The menus could also greatly use some other ways to organize the way Pokémon are displayed as it feels like having to sort through multiple menus in order to find certain information. There’s also no way to select any Pokémon as a favorite or specially marked as important, making it too easy to abandon one that was intended to be kept.

While Quest is free to download, it’s called free to start rather than just free to play. This term can almost seem a little bit misleading by implying that there is a purchase necessary to complete it but it in fact can be completed without ever spending a cent. There are also very few micro-transactions and can more accurately be considered DLC. There are a couple of packs which offers players exclusive items and extra cooking pots, in addition to some Pokémon with exclusive moves, but outside of that the only other purchasable item are Move Stones which can be obtained naturally through gameplay. There is also no way to purchase the in-game currency and instead players are rewarded with fifty every day in addition to one free Pokémon at the same time making it never feel like it’s trying to get the player’s money in any way whatsoever. Of course, this could change in the future, but as it stands the only purchases feel more like supporting Quest rather than any sort of pay to win or continue scenario. 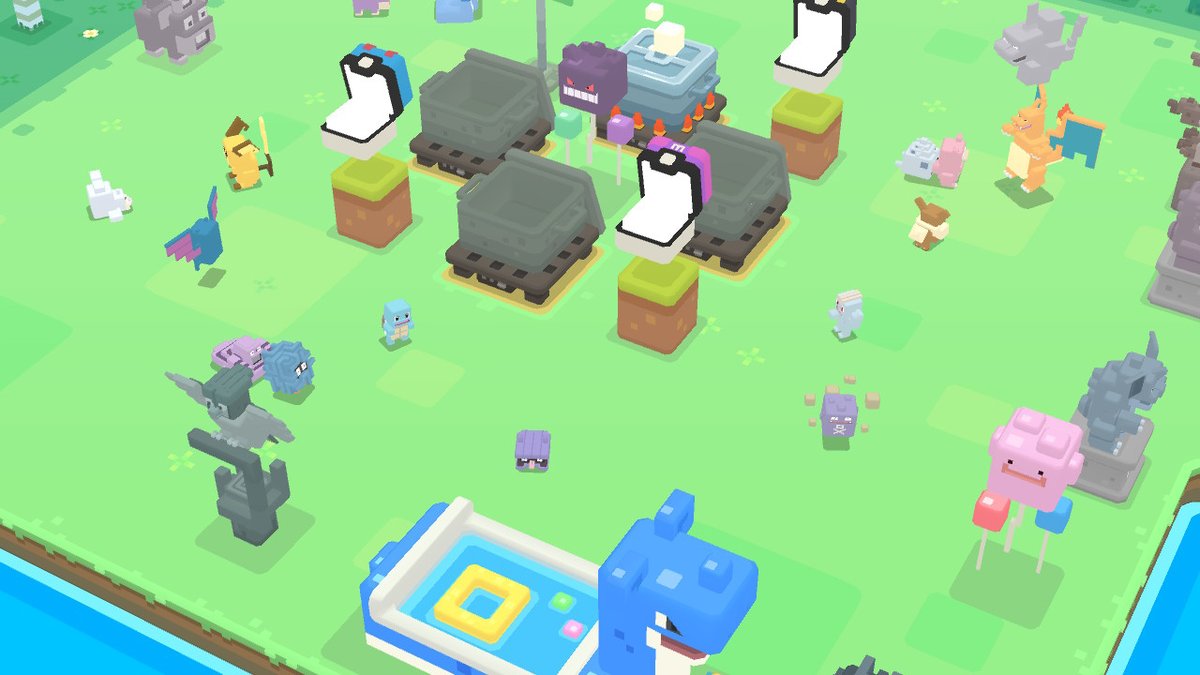 Pokémon Quest might not have the same variety as many other spin-offs in the series, but it takes a simple idea and extends it into a good experience that encourages really trying to collect them all. Although Quest currently only features the first 151 Pokémon, it’s likely that it will see future updates that slowly add in the others over time making even more reason for players to regularly keep up and return. There is some grinding that is necessary, but as it’s easy to put down and let run on its own, it never feels tedious. Pokémon Quest is a wonderful experience that is easily played in short bursts and feels properly at home on Nintendo Switch in particular as it makes great use of the tablet-like aspect of the system. Those interested in this cute cube-styled world should give Pokémon Quest a try as it’s truly a delightful treat for every type of Pokémon fan.