The original Overcooked is a party game based around working together to navigate the chaos of the kitchen while somehow producing good food quickly. Overcooked 2 is very much the same in that regard, it’s just turning up the culinary mayhem up a couple more notches.

The basic setup of Overcooked 2 is that the Onion King didn’t learn his lesson from the first game, and he’s once again inadvertently created a potentially apocalyptic situation by reading from the “Necro-nom-nomicon.” There’s no time to lose and lots of orders to fill, so it’s up to the the players’ team of top-notch chefs to cook their way through all of the Onion Kingdom’s improbable kitchens and save the hungry hordes.

The gameplay of Overcooked 2 is largely the same as that of its predecessor; it’s just grown a little bit. Players can now throw ingredients to one another, which isn’t a massive game changer, but does make getting some orders out a little easier. Players will need to master it nonetheless though, because it’s absolutely vital to success in certain types of kitchens. This is where that extra helping of chaos comes into play and where the game see the most change an expansion. If fans thought the kitchens in the original Overcooked were a bit zany, then they’d best brace themselves for what’s waiting for them in Overcooked 2. 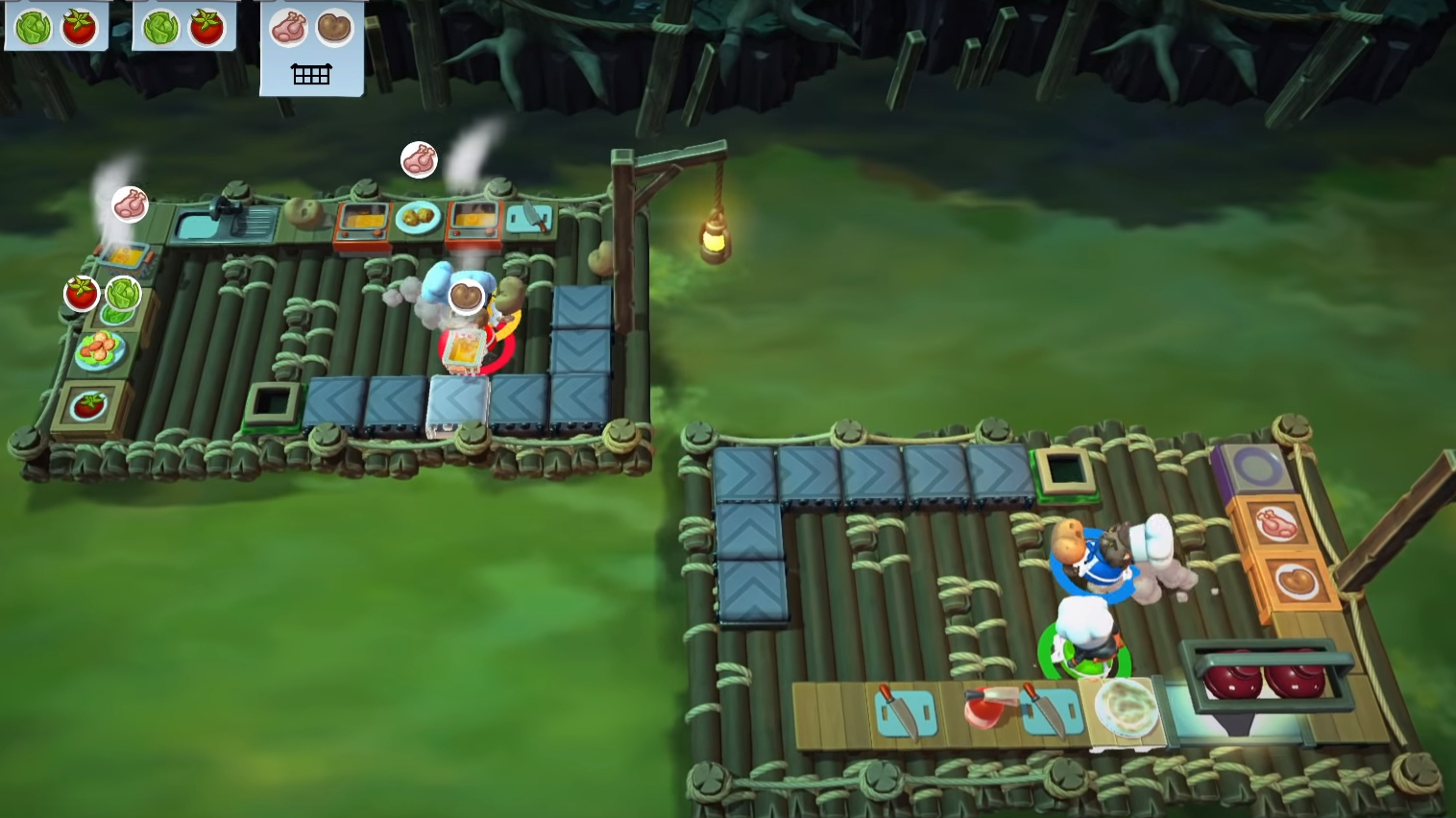 While there are still plenty of normal kitchens to enjoy in Overcooked 2, there are plenty more that offer unique and even puzzling challenges. In one case, players will need to figure out how to cook on a bridge with foot traffic trying to pass through, while in another they’ll have to deal with filling orders on a bunch of rafts lashed together. Some of the newer kitchens are dynamic rather than static, meaning that they change from a relatively simply layout into something more complicated as the round proceeds. Some of these won’t even on the main campaign path and will instead have to be unlocked through exploring the overworld map. Ghost Town Games really seems to be trying to create a more involved experience this time around.

To support their expanded goals for the game, Ghost Town Games has incorporated a few new features and extras beyond new types of kitchens. Many new chefs have been added along with a plethora of new recipes like sushi in addition to old ones like burritos and pizza. Players start with a small selection of chefs but can unlock more by progressing through the game and overcoming certain challenges. The overworld map is more or less the same as it was, but with more detail given both to it and the chef’s bus, and it also has secrets to find that will unlock otherwise hidden stages. The game’s multiplayer options have expanded as well. 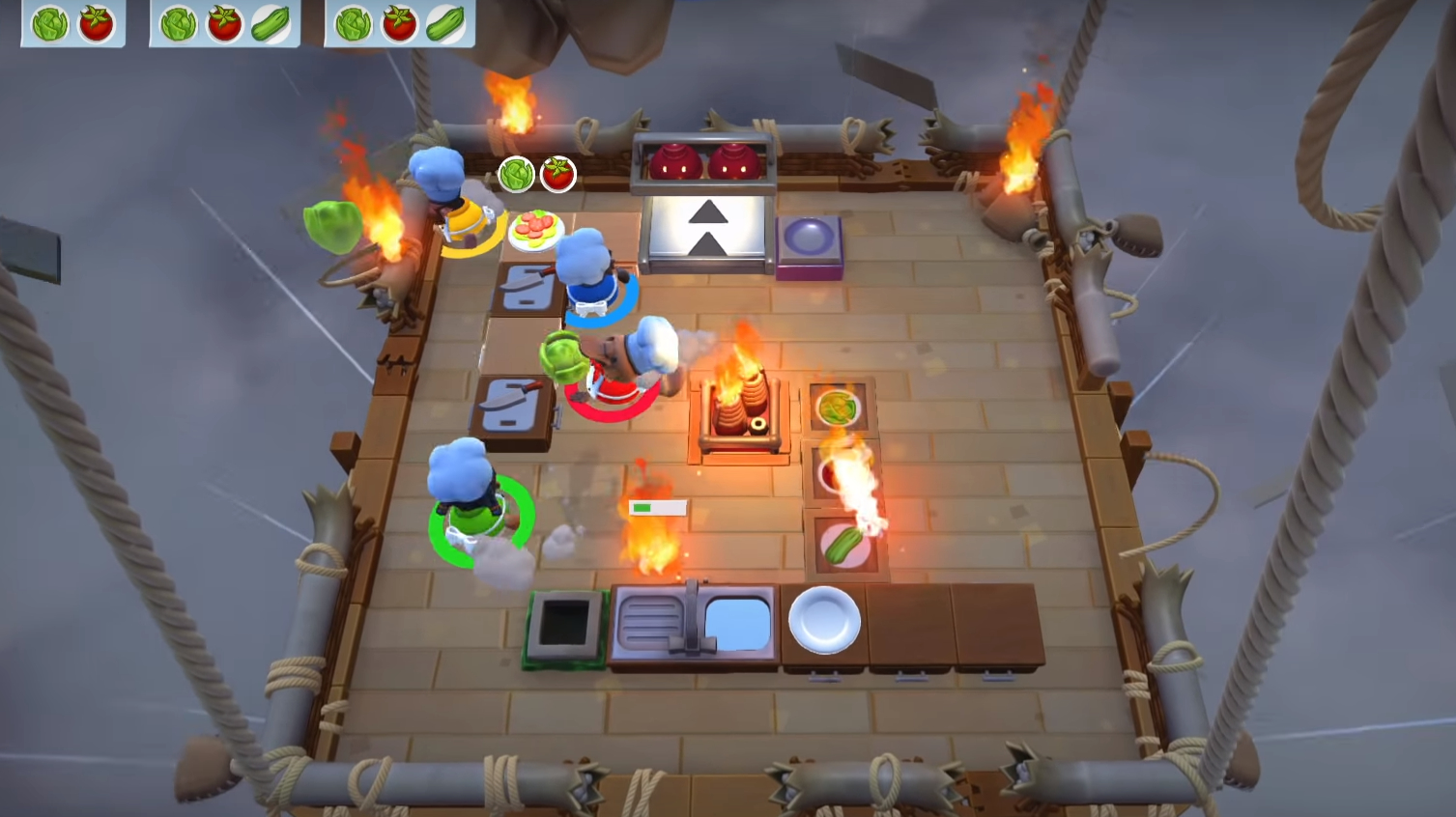 The original Overcooked only supported local multiplayer, but that’s no longer the case with Overcooked 2. This time, players can enjoy online multiplayer in addition to local, and those playing on the Switch even have the option of playing together via local wireless. The online multiplayer should be particularly interesting because players won’t be able to verbally communicate to one another. Instead, they’ll have to rely on a set of emoticons in order to express what they want other players to do. This sort of system has been used to great success in the likes of Portal 2, it here it’ll might just serve as an extra layer of challenge for those who want it. Of course, we won’t know for sure until after the game releases and players have a chance to actually try it out.

Based on what’s been said and shown so far, it looks like Ghost Town Games are doing their best to take what was great about Overcooked and make it even better in Overcooked 2. The humor is still there; there are more chefs to play as, more kitchens to conquer and more ways to play with one’s friends. Existing fans are certain to enjoy it, and those who missed the first Overcooked would do well to keep Overcooked 2 on their radar in the months leading up to its launch on August 7.