In a sit down playing session with Michael Mendheim, Creative Director at Digital Dreams Entertainment, we went over what is to come for the franchise. The team has announced that a Nintendo Switch version is on the way, along with a physical release in September. Known as Mutant Football League: Dynasty Edition, it is going to offer a Dynasty mode along with two new species (werewolves and demons), six new teams that brings the total to 25, and new Dirty Tricks and arenas. Also at the booth was commentator Tim Kitzrow, who is most famous for voicing NBA Jam. He has been very enthusiastic about working with the team. “This is the most fun I’ve had working on a game,” Kitzrow said. Listening to his commentating during the game, it truly is ridiculously over-the-top and fits the game perfectly.

The game plays exactly like the original NFL Blitz franchise. Players familiar with that franchise will be able to easily pick up and play this, but also the original NFL Blitz was geared towards players being able to do that, anyways. The game consists of Dirty Tricks, which are cheat plays. These can range from a Bomb Pass that literally blows up a player to bribing the refs to call back a touchdown or a big play. After-play antics are welcome and players have health meters. Once depleted, players can literally be killed. There are pun names for every player and some are laughable such as Wham Neutron (Cam Newton). Each team also has star players so the game is truly a parody of the real NFL, but it is also driven by the community. 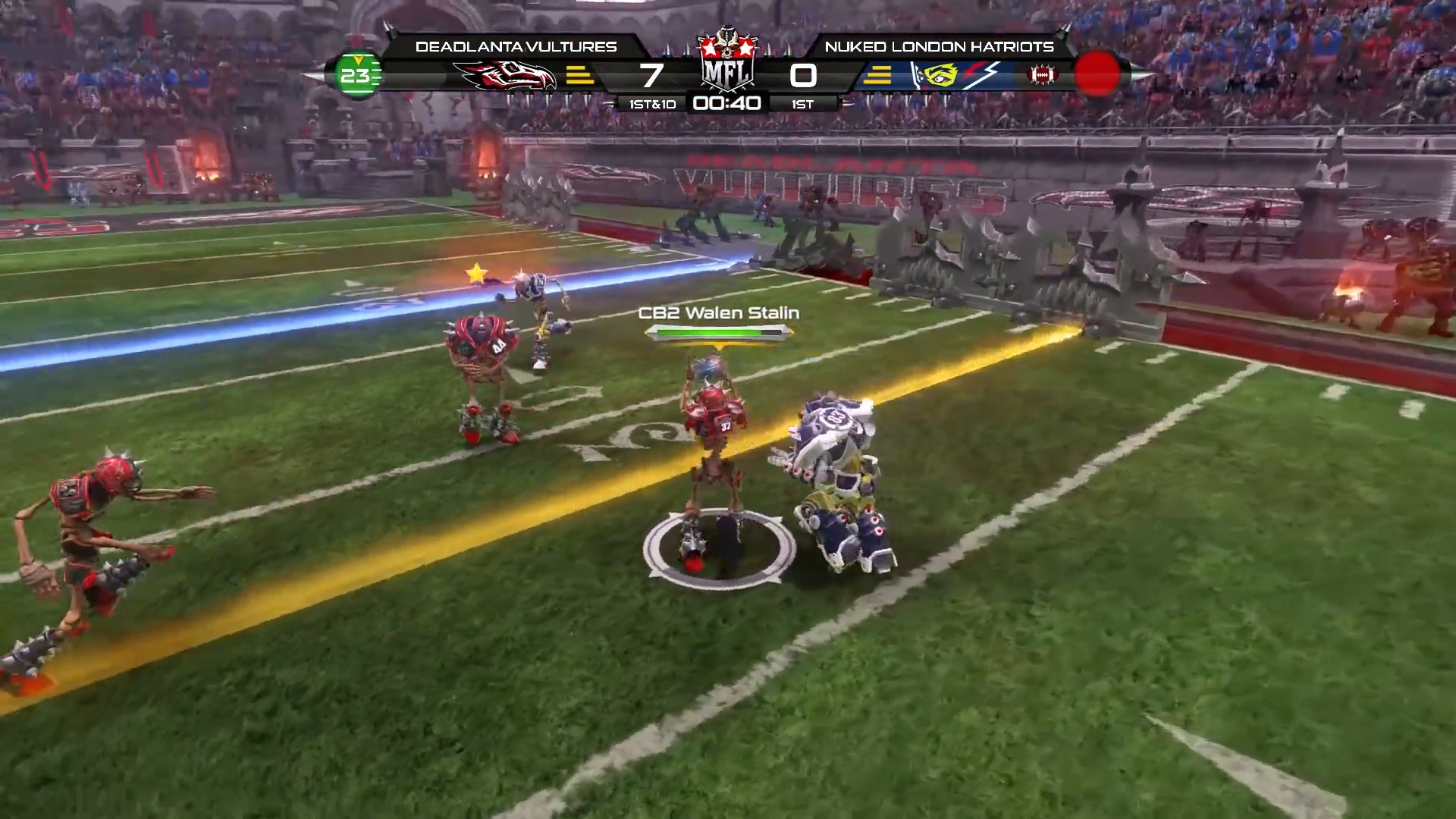 The biggest update to the game will be bringing the Dynasty Mode in. This is a single player campaign that will last five seasons but also parodies the NFL in terms of off-the-field antics. Players will start with a 40 rated team and earn XP to raise all players. Playbooks can be customized and the team can truly be built from the ground up. “There’s a team budget and you start out with a bunch of rookies and they suck,” said Mendheim. “You have a lot of money so you can pick up free agents and trade players. When players die, it costs money to bring them back. You’re constantly managing and what you’re trying to do is get your team so they can contend, get them in the playoffs and see how many Mayhem Bowls you can win. Your contract starts for three seasons and you have to make a Mayhem Bowl appearance. If you do, you get another two years. If you win it, you will get another extension.”

The most interesting aspect is the off-the-field antics that have to be accounted for. “Of course it’s Mutant League so we have to **** with it,” said Mendheim. “So every once in a while, we throw you curveballs where like Wham Neutron knocked up some cheerleader and the team is getting sued so it costs this much money. Or, he gets arrested for public intoxication and do we bail him out or we’ll hold out. We cover all things sports so we’ve going to have some controversial things in there. These are random and will happen in Dynasty Mode.”

So the playtime with Mendheim certainly represents the ridiculous and vulgar nature of what Mutant Football League is. Anything and everything is possible with this game. The physical edition will include updated rosters, as well, so parody players will be available on their correct teams. The game is an extremely funny and entertaining experience for any football fan.