Madden NFL Football jumped on the Frostbite Engine last year and the game was truly brought to life. With Madden NFL 19 on the horizon, the game will offer an even better experience in year two. We went one-on-one with Carlos Guerrero, Senior Producer of Madden, at E3 2018. The game is seeing improvements on and off the field with more news coming over the summer. We already know Terrell Owens will be on the cover of the Hall of Fame Edition, but players can also expect an All-Elite and All-Legends team to play with. That is just the tip of the iceberg.

Madden NFL 19 will bring the best visual fidelity of the game to date. This year there will also be a PC version for the first time in ages with mouse and keyboard support along with controller support for fans that want to stay traditional on PC. “We wanted to focus on that with year two of Frostbite,” said Guerrero. “We really focused on animations this year. Once and for all, we wanted to remove those immersion-breakers on the gameplay side of things. So pulling that animation quality up along with the visual fidelity will create a game that people will really want to play and enjoy.”

One thing that we experienced in our playtime was the ability to run the ball better. Being able to push the pile, find holes and pull off a one-cut allowed us to open things up while keeping the defense honest. One cut can be felt in the game in one-on-one situations and it isn’t just a lateral juke. This allows forward momentum and more yardage, as explained by Guerrero. “Yes, they definitely will be able to establish the run this year. We have a couple of gameplay mechanics when we’re talking about push the pile which will allow you to put your hands on the blocker and help move him around, then hitting the hole and one cut. One cut will allow you to accelerate on an angle. These are some really awesome things we have going. Defensively, a strafe mechanic is used to counter the one cut.” 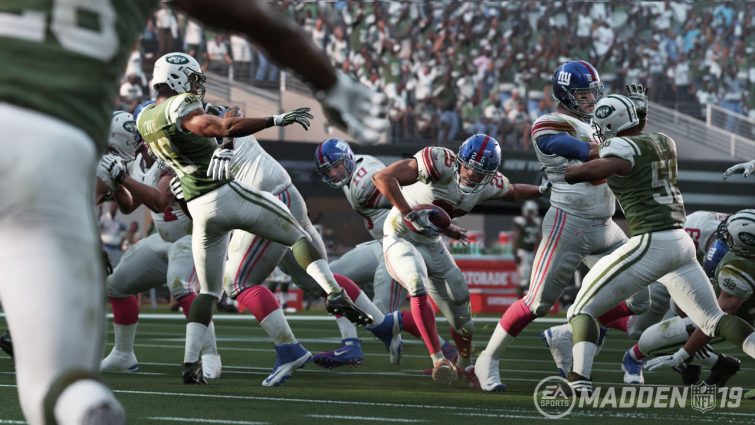 Besides the strafing ability to counter these one cuts, there will be other updates on the defensive side of the ball. Guerrero believes defense has to be just as fun as offense. “We’ve been working a lot with our coverage,” he said. “It’s one of those things that are constantly evolving. People play the game different ways and there’s always interesting and unique ways that develop on the offensive side that we have to constantly keep modifying the defenses to get there. We worked on our A.I. to improve that. Those are some of the big things on the defense of the ball.” One major mechanic that is being brought into Madden NFL 19 that players will love are the celebrations. When prompted after scoring or getting a user sack or interception, players can choose a specific celebration. These can be player-specific, team and a few other things. Guerrero broke this down more for us. “That’s one of the things that the animation quality allows us to do in Frostbite. Actually putting in signature celebrations for players and group celebrations. We are going to allow for players to get a little bit more of ‘I just did this to you.’  I think people will really love it.”

The Franchise Mode has been lacking in progression the last few years. Other modes seem to be rising but at the same time, it becomes increasing difficult to innovate a mode that does a good job of replicating a GM experience. We asked Guerrero about what he could discuss with what to expect with Franchise Mode. “We are adding custom draft classes to Franchise Mode this year. We are really excited this year. This will allow players to use their imagination to see what kind of draft classes they can make. You will start seeing people come up with classes and will help keep Franchise alive. Player Archetypes are awesome, as well. It gives a little more flexibility on customizing your player.” This will be the closest thing to importing players from the NCAA Football franchise as the classes can be shared across the board. 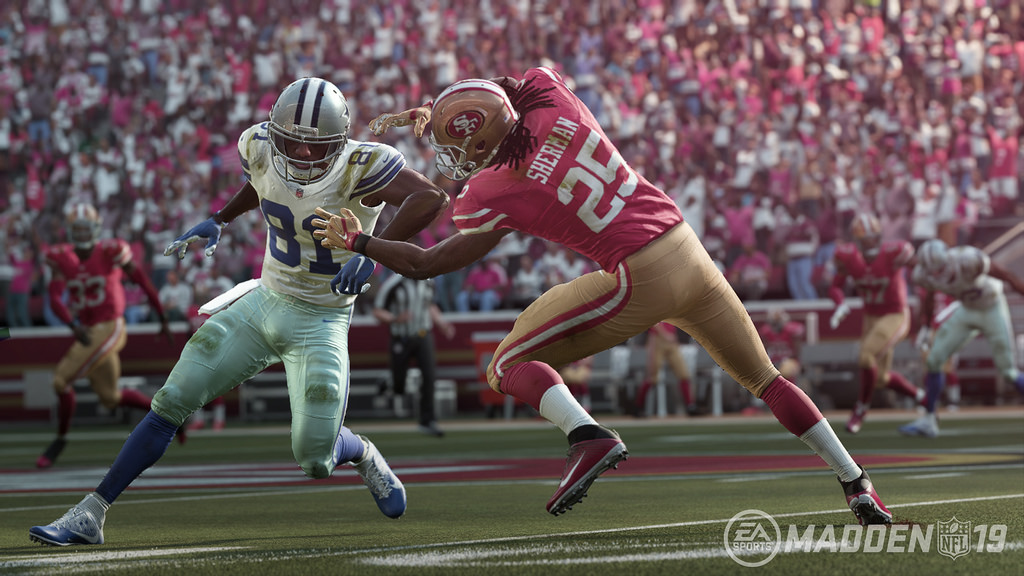 Madden Ultimate Team introduced a 3-on-3 mechanic last year. This year, it’s getting a PvE mode where three of your friends will take on the A.I. Guerrero shared some more about what to expect with this new way to play. “This is more like a campaign. Players will be able to play together and go through these challenges. We saw the solo play was pretty fun for players to go through the various challenges. Why not do that for your friends? Playing with friends is always fun and a lot of people don’t always want to play head-to-head, so let’s give them the opportunity to hang out and do something.”

When playing Madden NFL 19, the animations and the improved flow are noticeable. Players can also chain together moves as a ball carrier and throwing the one cut in there become necessary. The visuals stand out thanks to the improved lighting. Madden NFL 19 will launch on August 7 for Xbox One, PlayStation 4 and PC via EA Origin. The standard version cover athlete is still yet to be revealed, so look for that in the coming future.