Jump Force was a surprise announcement a couple weeks ago. Inspired by the popular Japanese manga magazine Weekly Shōnen Jump, Jump Force is an upcoming 3D fighter that combines several popular anime and manga characters. Jump Force is set in the real world, where characters from the Jump World have invaded and naturally have a bone to pick with each other. As this title was recently announced there isn’t a great deal of information about it, but that’s why Hardcore Gamer decided to sit down with producer Koji Nakajima to try to learn a bit more.

[Hardcore Gamer] Jump Force looks like the crossover anime fans have been waiting. So far we see Dragon Ball, One Piece and Naruto in there. Can you tell us who else might make an appearance?

[Koji Nakajima] Unfortunately I cannot say too much at this moment but I can tell you that it won’t be limited to just these three franchises you are seeing at this demo. We will be rolling out more announcements as development progresses and it gets closer to launch so please stay tuned.

It’s cool how all the different worlds from the Jump universe are coming together in the real world and doing a hybrid art style with the game where the characters look 3D and somewhat realistic but still have their trademark anime features. What inspired the idea to make things look more realistic and take place in real world locations?

The idea came about because we wanted to give a huge surprise to our fans commemorating the fiftieth anniversary of the Shōnen Jump series so we wanted to stick to the specific anime style but still do something we haven’t done before. The inspiration came from wanting to surprise and give our fans something they’ve never seen before. And I grew up reading the Shōnen Jump series and I’ve always had these fantasies and dreams like what if Goku was fighting in the streets just around the corner of my house of One Piece doing this in the world, I sort of had this image back then and that was another source of inspiration to this game. 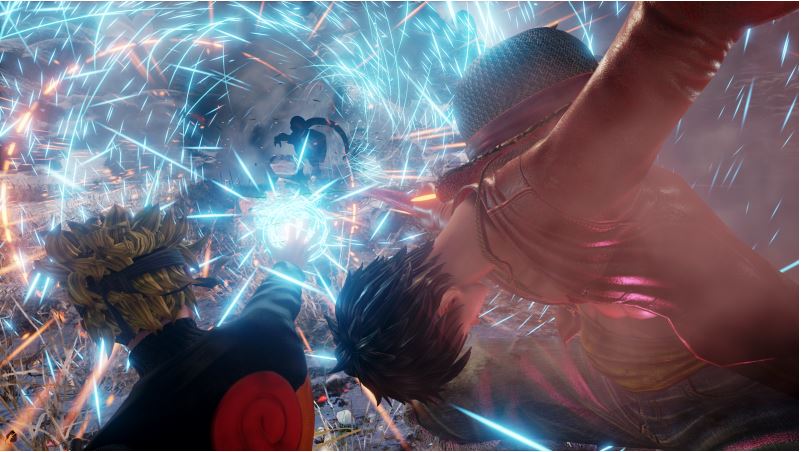 It definitely has an interesting look, the environments and explosions looks realistic while the characters have almost a claymation quality to their appearance. It’s unique but it works. I realize you can’t tell us all the franchises that will be included since you want to roll out surprises and keep fans interested and guessing but can you share a ballpark of how many playable characters there might be?

(laughs) Again, sorry but we can’t go into too much detail or give a ballpark about that at this time because it’s in such an early phase of development but what I can tell you is instead of trying to cater just to hardcore gamers and the competitive scene the focus is more on the casual fans but we still want the hardcore ones to enjoy it. We’re trying to develop a character roster that will please everyone so please stay tuned for future developments.

The controls did seem accessible and intuitive. It reminded me a bit of a 3D Dragon Ball FighterZ but different enough where it would be more like a complementary title. I have a feeling my next question might be premature, but I’m curious about the story of how these worlds ended up colliding and getting mixed up with our own world. Can you shed any insight into that?

So again (laughs) can’t really share too much detail on the story the pretext or premise of the story is that in the real world there is this Jump World view that we know of where people like Goku and Naruto will go and fight enemies. In the game trailer we throw in these little hints, I don’t know if you saw it yet but we threw something from Death Note so in the story we try to put in some mystery elements and try to explain how the real world and Jump World came together in the first place.

I see it’s using the popular three on three battle mode. What kind of different game modes will there be, like a story mode, tournament mode? I’m assuming there will be online and local multiplayer.

It’s still a little early in development to say what will be included in totality but there will be online multiplayer but as far as what we can do online will be announced so please stay tuned. Sorry we can’t delve into too many details. As it stands now the demo is still in the very early stages of development so there will be more features. We also want to receive feedback from people who have played or seen the game and want to implement change and improvements based on fan feedback. Right now we don’t have a specific release date but we’re saying 2019 to give us some flexibility.

Makes sense, you want to get the game out but you want to make it the best game you can without feeling like you have to rush into a deadline.

Definitely, this is our first time demoing at E3 and there are certain things we are blind to that we don’t see from a developer’s standpoint so it’s really important we pick up feedback as we receive it and get back home and make changes.

There have been a lot of good fighting games coming out recently. What are some features in Jump Force that will help it stand out from the pack?

In terms of how we fit in the fighting game series environment, for example I think Dragon Ball FighterZ is more of a bonafide fighting game, it has very deep game mechanics, something the hardcore fans can get into. On the contrary, I think Jump Force is something that would be everybody, it’s really made for the fans of Jump and we want everyone to be able to play their favorite characters, whether they be casual or hardcore on the spectrum. I think if we were to make a comparison to other fighting games out there now we would be more closer to Xenoverse or the Budokai series of Dragon Ball Fighting games. As far as distinguishing this game from the other anime fighting games is the realism crossed with things like the God Tree from Naruto growing in Times Square or Frieza’s spaceship. That crossover between the real world as we know it and the Jump World converging is something you don’t see in other fighting games. 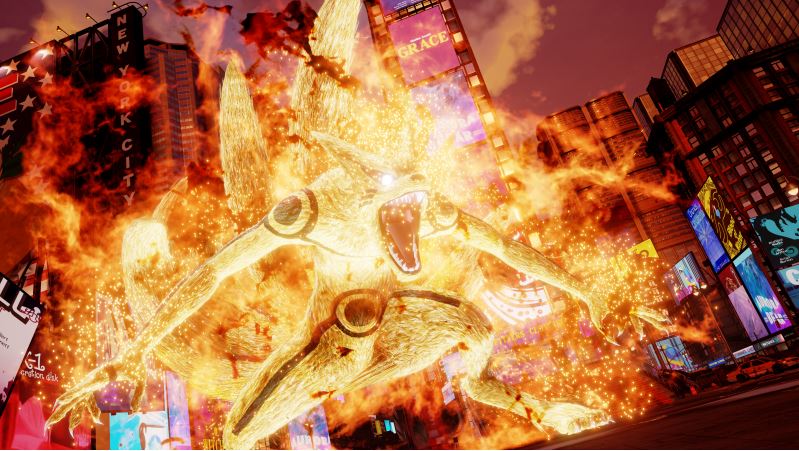 What are some things we haven’t touched on yet that you’re proud of and excited about with this game?

Personally the exciting part in this build is where you can see Naruto’s fox familiar appears in Times Square inside the buildings of New York and that is something everyone should see. I really had fun taking all these elements of the original series and putting them into the real world and see how it fuses together and how it looks together creating that new experience and putting the characters’ super moves and special moves and conveying them in the real world atmosphere, that part was a lot fun with the design. As we said before, this is a very early demo and our first time putting it out for fans to experience so there will be a lot more features that will be revealed and implemented in later builds. For example, it’s not in this build but there are elements inside this game where during the battle the characters’ clothes will rip and their bodies will get damaged. Our focus is really on realism so we want to really establish that and make people react at how realistic the game.

I don’t know if you can safely answer this question from a PR perspective but this is more for my own curiosity. Obviously you’re a big fan of Jump, are there any mangas in particular that inspired the whole thing or has particular significance to you?

It’s really hard to single out one title. The Jump series has been going for fifty years and it’s not like these titles are concentrated into one generation. The first manga I read was Dragon Ball and it was really really good and after a while One Piece came out and I loved it and after a little while Naruto came out and I loved that too so my favorite tends to change based on what my age was at the time. I have my personal desires about how I want this character to be in it, unfortunately I can’t tell you who that would be but I would like the fans to look forward to future announcements and have their own predictions or theories. I am very honored to announced Jump Force at E3 and I really apologize that I couldn’t reveal too much at this time but we will be coming out with new information and announcements as development progresses and we won’t leave you hanging for too long.