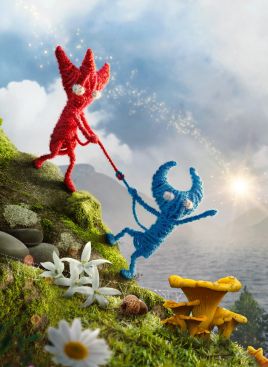 It kind of goes without saying that Unravel Two was a pleasant surprise when it was simultaneously announced and released at E3 a short while ago, given how much we loved the first game. But I’ll admit that I had some concerns when it was announced that the sequel would have a strong focus on co-op play this time around. It used to be that shifting gears to multiplayer was the standard route for a sequel, but in recent years it feels like too many designers emphasize it too much, having to tailor the entire game around it and either alienating those playing alone or having the extra players feel tacked on. And no way in hell would we want such a fate to befall Yarny, of all game characters. So can this new entry handle double the yarn, or does it wind up a tangled mess?

For this game, the focus is actually shifted away from from the lone red Yarny of the first game in favor of two different ones, red and blue. After meeting up with each other during a shipwreck, the two protector spirits set out to find a mysterious spark, using an old lighthouse as their hub area to transport to various Scandinavian landscapes while following the story of a young couple, played out in the backgrounds through various shadows. As expected, this tale has more than a few hardships along the way for both pairs, and they need each other to help get through it, prosper, and reach the end of their journey.

The aforementioned landscapes are unsurprisingly just as gorgeous as they were before, shock of all shocks. Our two Yarnys will have to journey through the likes of forests, ponds, factories, and even all little chunks of an urban city, all experienced from creatures about the size of your fist (if not smaller, but they do seem to change size slightly when needed). So you get to see incredibly detailed grass, inner workings of various machines, multiple animals, and more, and it is absolutely breathtaking. Again, the scope does a lot to make things epic. When a moose thunders across the background in a third-person open world game, it’s cool, but in a platformer like this, it actually feels like a massive event. 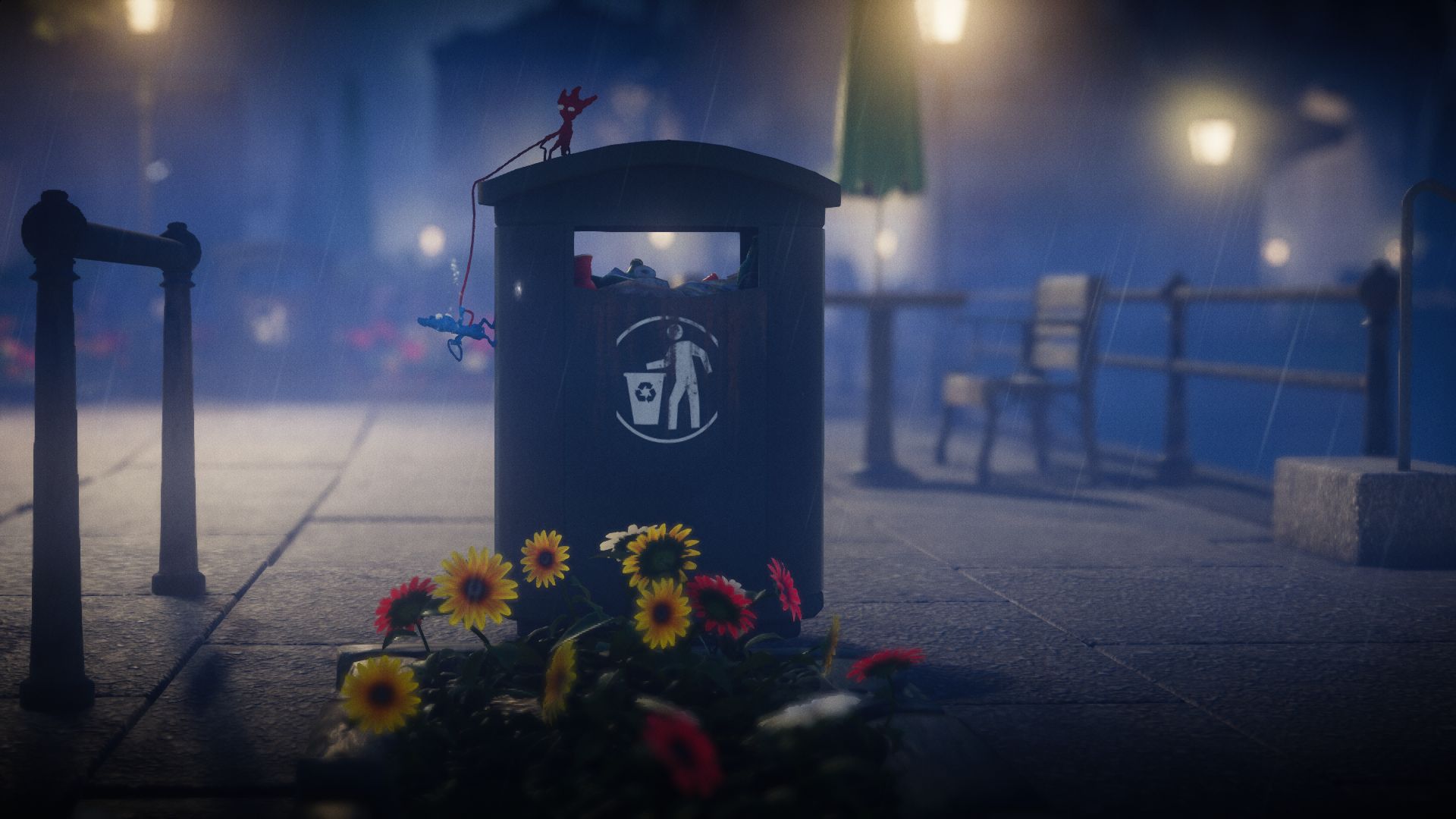 It also highlights more than few dangers that our heroes will have to face, coming from various environmental hazards such as ravenous birds or fish with gaping maws (in addition to a mysterious dark force that burns in anger, manifesting as standard platforming enemies most of the time). Escaping them provides quite the rush, and is thankfully easy to pull off with some rather impressive platforming controls. Like before, our main heroes have Spider-Man-like skills, being able to use the yarn that makes up their bodies to swing across certain points, tie knots, pull items, create platforms/trampolines, and more. It becomes quick and easy to get used to, and makes for maneuvers that are still just as much of a blast to pull off.

But now, getting into that co-op dilemma posed in the intro…well, it turns out there was no need for a dilemma, because it is integrated near-perfectly! Yes, even when playing alone, swapping between characters is done with the mere touch of a button, allowing you to switch between each Yarny or even combine them into one for convenience. With both of them joined together this time around, they gain new ways to get through areas, such as providing an anchor while the other swings from one platform to another, or allowing one to pull on yarn to climb up to new areas the other has reached. It’s just as easy to work with as the regular controls, and actually turns out to be incredibly fun with or without a friend. 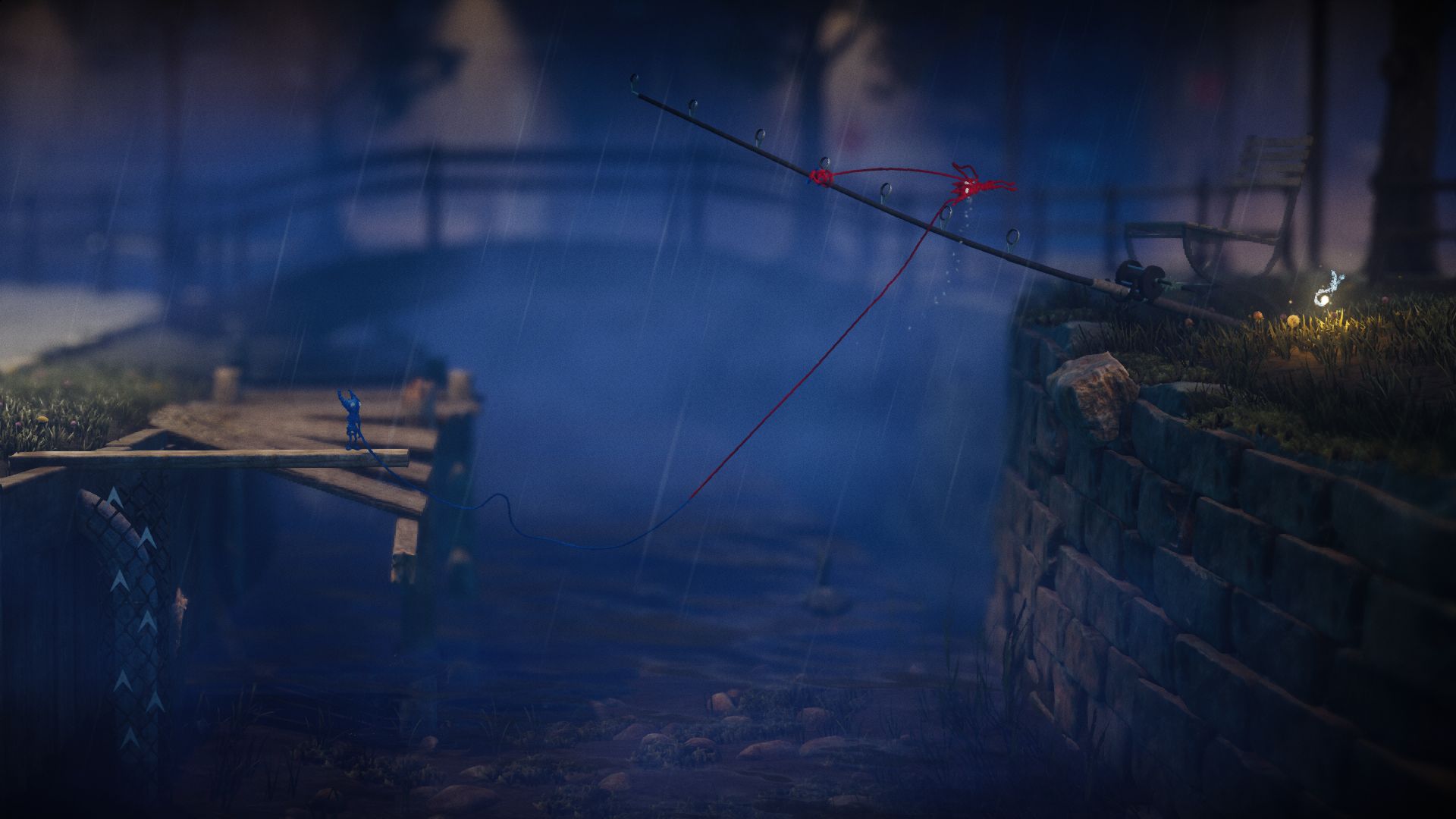 The addition of a duo means that Unravel Two also has to rethink its approach to puzzles slightly compared to before, but the brain-teasers this time around are perfectly suited for the new setup. It starts out with the basics like pushing a brick one character is standing on to the side of a wall in order to reach a higher area, then slowly but surely escalates along the way, having you tie and unravel knots in proper order to create platforms, maneuver a Yarny through a maze while hanging from the other, or having to find optimal ways to loop around objects in order to craft a path that leads the two out. The physics are terrific, platforming is utilized superbly, and there are even a few areas that can leave you stumped for a bit.

Despite being a narrative-based puzzle-platformer, Unravel Two has also worked on improving its replay value slightly. There are the standard collectibles in each level in the form of painting scraps, and medals for time trials, but now we also get twenty optional challenge levels that get unlocked as you progress, giving both your reflexes and brains a good workout with some rather impressive maps. Beating these levels also earns you extra body types and heads so that you can customize each Yarny, which isn’t a mind-blowing implementation of customizable characters, but is still quite the welcome touch nonetheless. 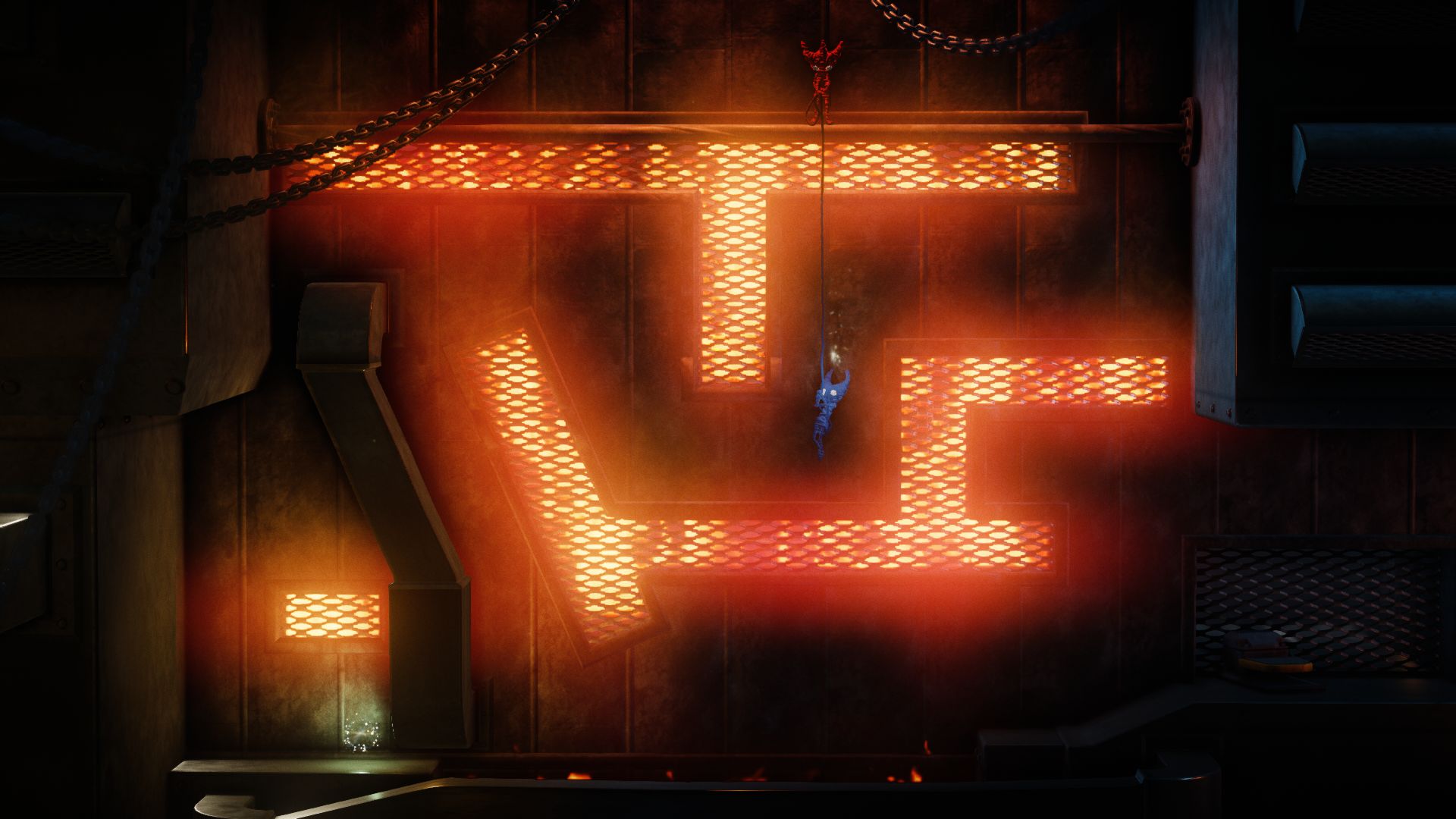 Unravel Two is overall an extremely solid and well-crafted game, though it does have a few minimal flaws holding it back. The level structure tends to get a tad predictable at times, with every stage seemingly ending in an auto-scrolling chase sequence and featuring exactly one token puzzle where you have to maneuver the two characters into separate areas on the map to unlock a way out. There are also a few skills set up in the (rather lengthy) tutorial such as swimming which get downplayed during the rest of the game (in fact, later areas with water seemed to be instant death, which felt slightly counter-intuitive compared to earlier). Not that their absence impacted much, though.

The final level is also a bit of a letdown. While it provides a good climax narrative and emotion-wise, it also scraps any challenge worthy of a finale with a sudden, new power gained only during this level that makes it into a bit of a cake walk (and left me scratching my head slightly as to what was going on story-wise). The background tale with the human characters also lacks the same oomph as the first outing, even feeling a tad cliche at times, even if it has a decent conclusion. 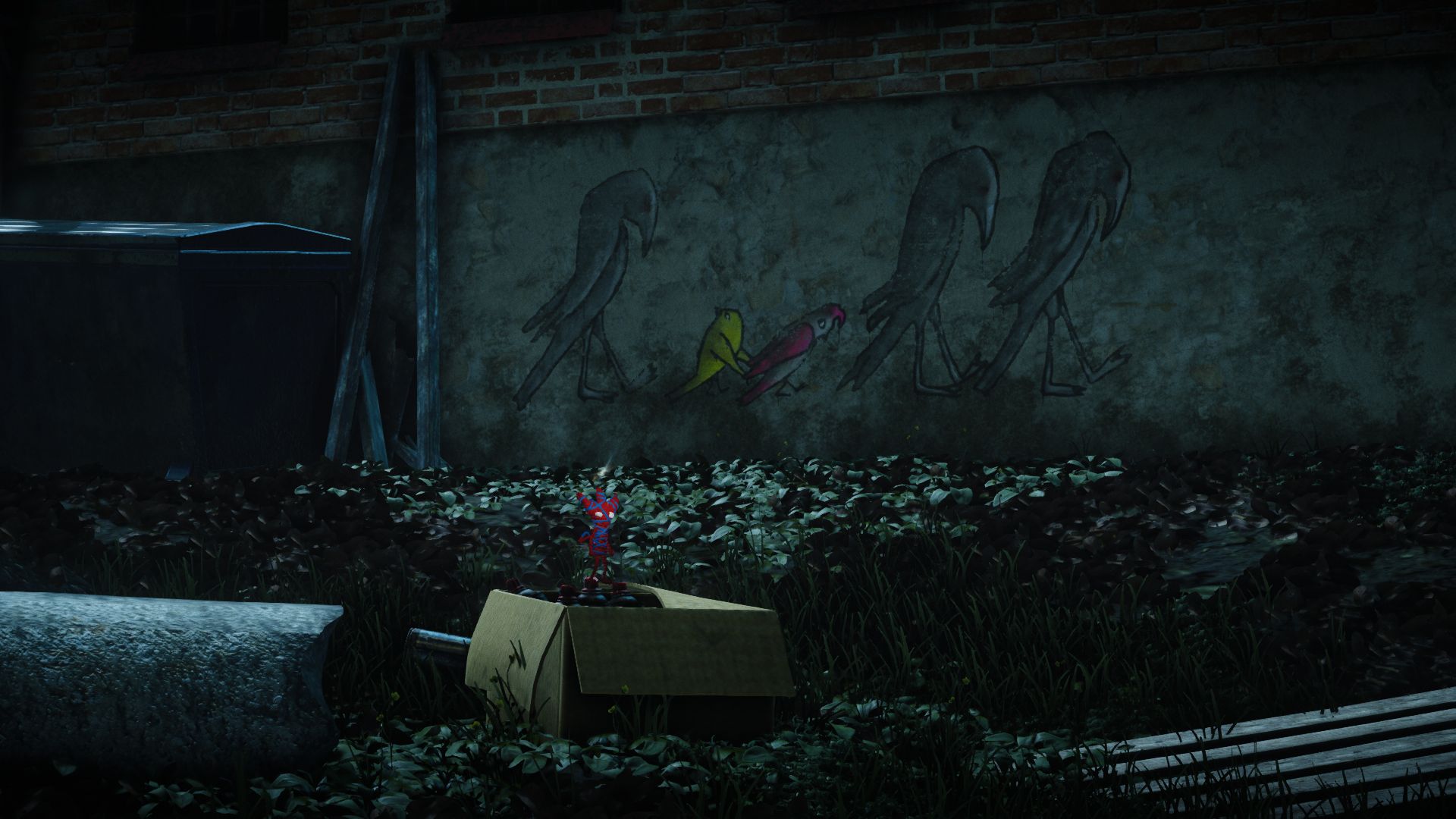 Unravel Two is a quick journey, but one that does its predecessor justice. Coldwood have not just avoided the types of hazards associated with co-op, but also used them to great advantage in order to expand upon their gameplay in the ways that the best sequels do. The puzzles are a blast, the graphics and environments are jaw-dropping, and little bonuses such as the challenge levels provide a good incentive to keep coming back for a while. It may not hit the same emotional heights as before, but the latest outing for our stringy heroes is one that cements them as the stars of a classic franchise in the indie gaming scene, so don’t miss it.