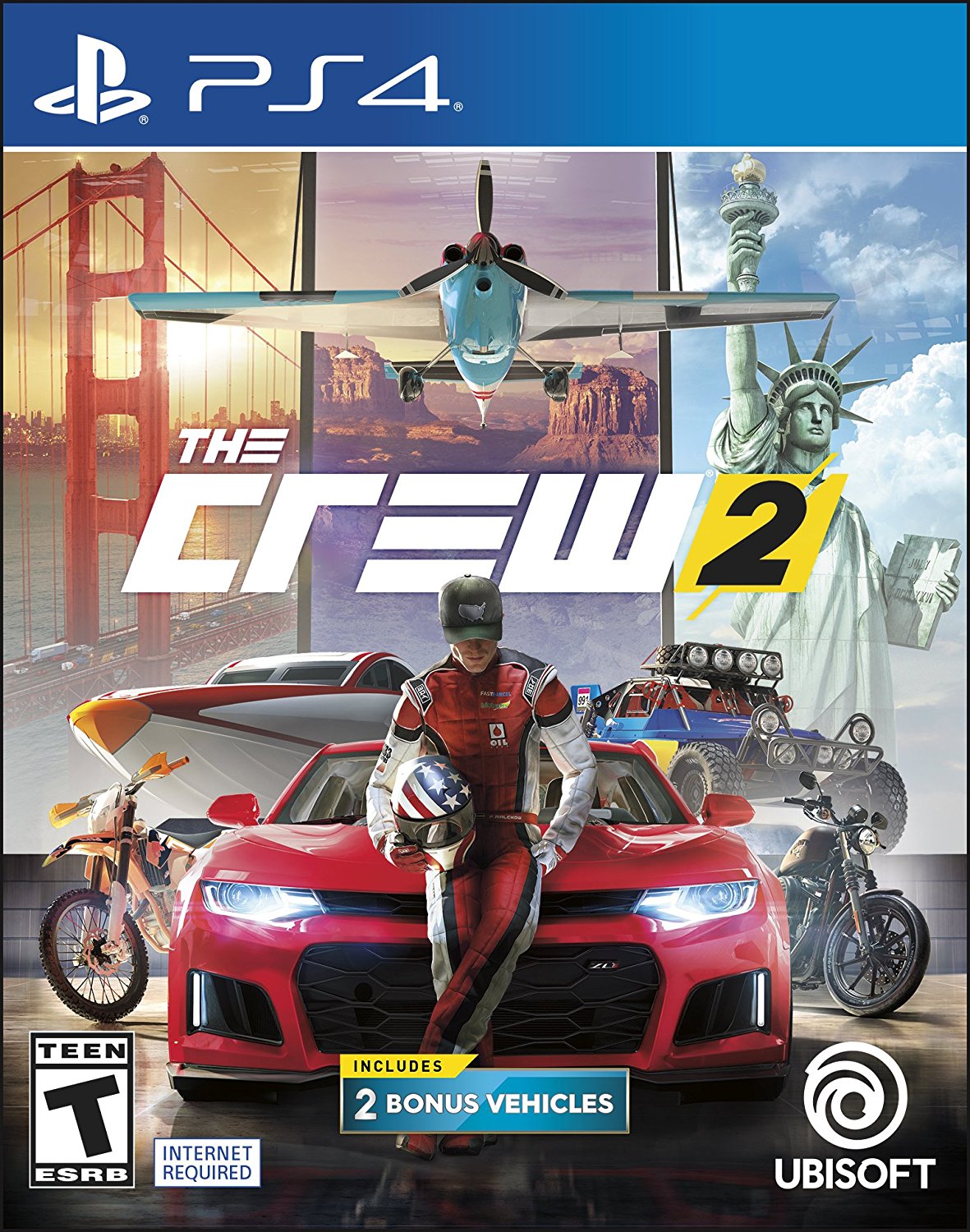 Ubisoft entered the racing realm with developer Ivory Tower’s The Crew a few years ago. The game ended up being underwhelming to critics and fans craved more from the arcade racer. The company has now released the sequel with The Crew 2 and is offering and abundant amount of ways to race. The focus of the game is on motor families that include street racing, pro racing, freestyle and off-road. More importantly, the game is open world and features a condensed version of the United States that features nine major cities and even real-life race tracks in there. The Crew 2 offers a lot on paper but does it do enough in its execution to be enjoyable?

The open world is vast in its size and diverse in its regions. Featuring major cities such as Los Angeles, Miami and New York, players can actually travel via land, sea or air between locations. These are condensed versions of each city, all accessible from a Google Maps-like interface as events will show on the map or you can just ride around and swap vehicles and enjoy the landscape. The world includes day-to-night transitions and different weather effects. It’s truly a living and progressing world to race in.

The visuals stand out in The Crew 2. The lighting is something to marvel at. Being on a coastline at sunset or being in the mountains at sunrise really is something to take in. The car models also stand out as being superb. The glare off the cars and the inclusion of interior views are all great enhancements. The interiors aren’t the best in the world, but they offer enough detail to appreciate the effort. But it’s the combination of specific times and locations that truly make you appreciate the visual appeal. The game is Xbox One X and PS4 Pro enhanced and it stands out. The action is fast and smooth and the sense of speed is apparent. 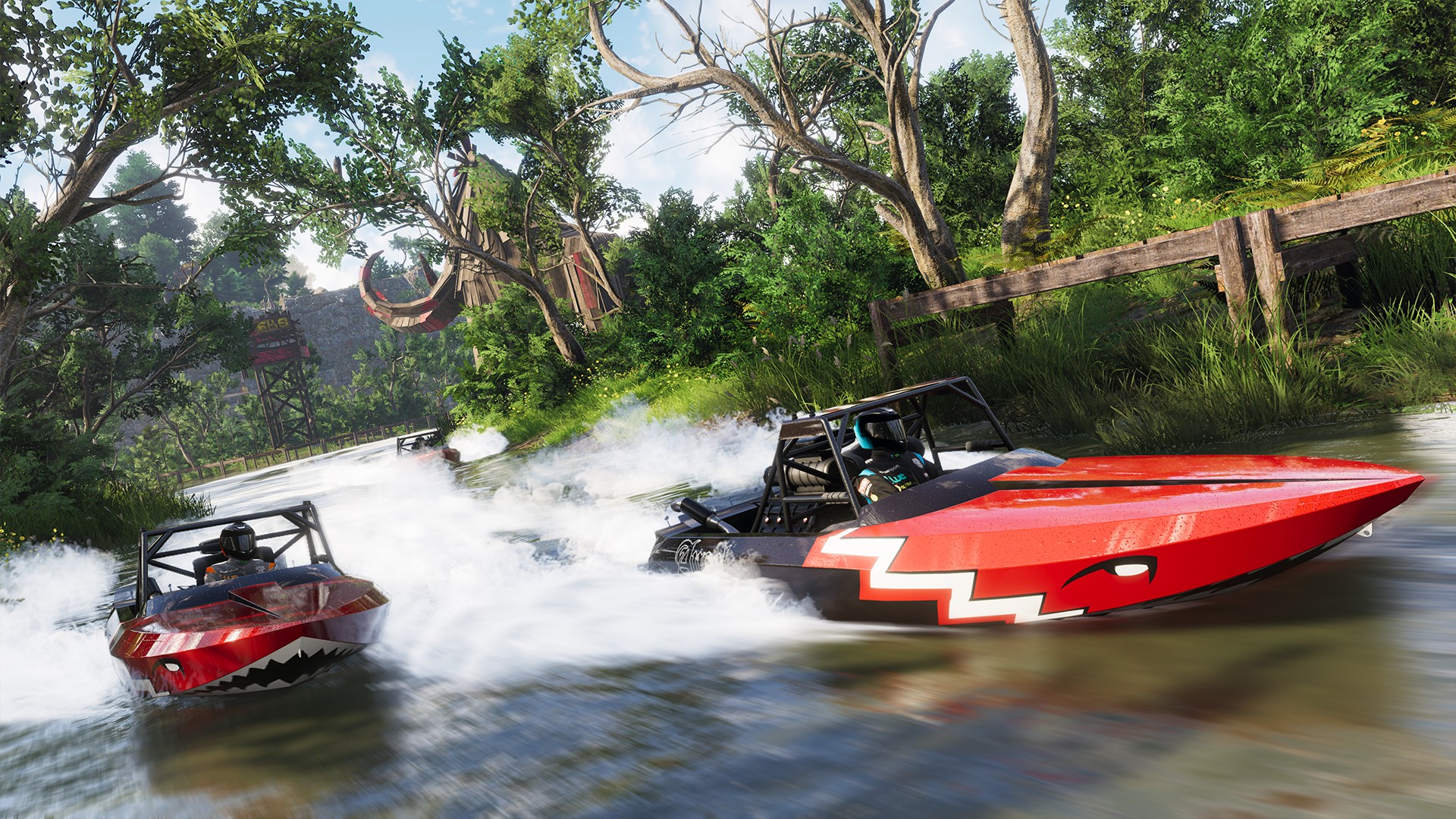 Things on the surface look inviting with The Crew 2, but the faults start to appear digging a little deeper. While the game is visually appealing, if not stunning at some points, some visual issues will bug you. As improved as the car models are, there’s no damage outside of scratches. The draw distance involves a lot of pop-in and the areas between cities become redundant highways. The game is filled with traffic, pedestrians and wildlife, which are all nice touches, but the detail in these are lacking. Also, slowing down in a city will show a lot of redundancy and this is where that words starts to crop up a lot more.

With hundreds of vehicles ranging from exotic cars and classic cars to speed boats and acrobatic planes, there’s always something new to try. There will be some races against A.I. opponents and some against a ghost. The racing gets hurt by its eventual lack of immersion. Using arcade physics, there isn’t any difference in the feel of the cars. Add to this the inclusion of rubberband A.I. and it takes the fun out of the racing. Especially when the focus of the game is grinding just to level up your car with parts that are awarded by loot. The parts upgrades are simply progression as there is no difference in the card. You race for money and achieving “followers” to progress the narrative and level up. 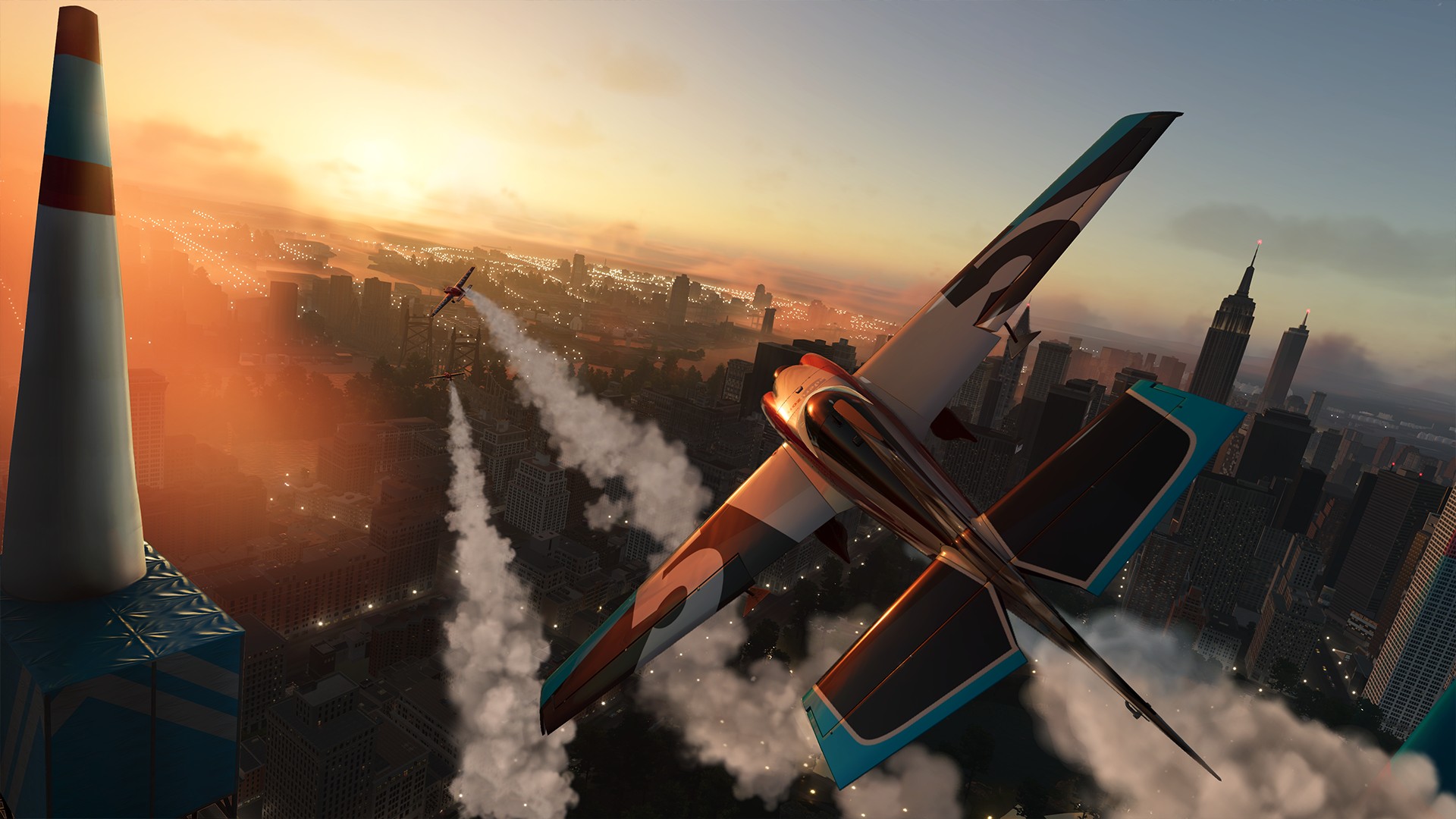 What helps eliminate the redundancy is the mix of racing. With the four racing families, players can literally jump from street and drifting to hopping on a dirt bike or doing professional racing. The game includes tons of sponsored events from actual companies to try new vehicles as well. The Crew 2 even includes Daniel Riccardo’s Red Bull Formula One car. The contact physics are lacking in the game and that also hurts the immersion. Cars don’t wreck and running head on into a tree just kind of stops you. You also have to use trial and error to figure out what objects can’t be driven through. There’s no ridiculous crashes or physics and it takes the excitement out of battling. Combine that with the rubberband A.I. and the racing quickly loses its excitement. Tricks can be done in planes and on bikes, which are a nice change of pace.

What would be an improvement would be the ability to race other people. While the game has a way to include cooperative racing, it shouldn’t be this difficult. For a game that requires a server connection, you rarely run into other racers. There’s no matchmaking for any events and basically you have to invite a friend from your friend list to be in your crew. Otherwise, you have to add random strangers. Random multiplayer events would make the racing experience better and would help players forget about the rubberband A.I.. Ivory Tower shot themselves in the foot on that aspect. 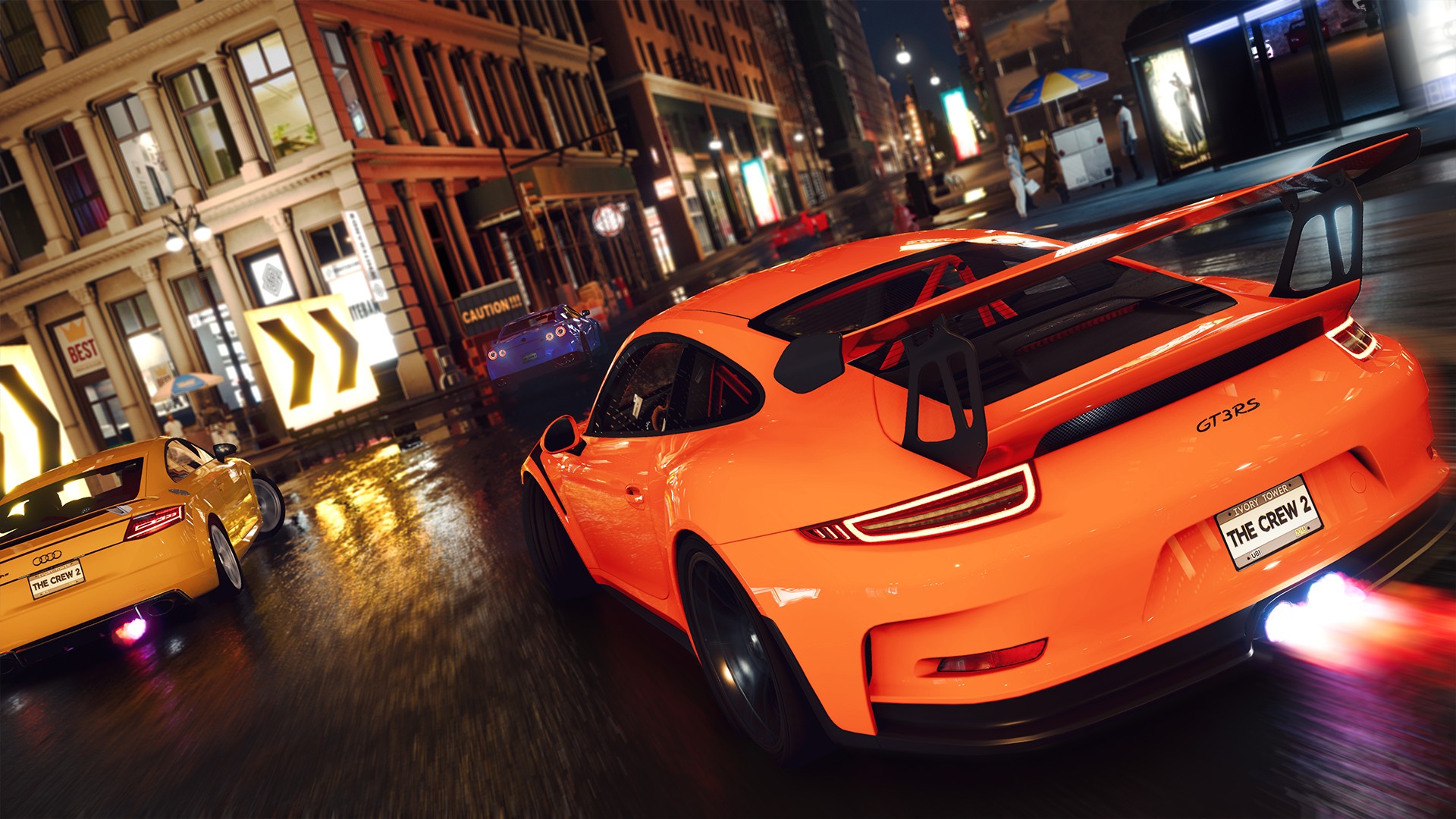 The narrative is predictable and an afterthought. You choose a person that you can deck out in different outfits and try to earn social media followers to raise your popularity level. The characters and dialogue are bland and forgettable and become more of a hindrance when all you really want to do is race. There are big events that get unlocked that are treated like a television program that’s a cross between the X-Games and Cannonball Run. It comes off as cheesy and forced and with the complete lack of emotion and bad voice acting, it was better left at home.

The soundtrack in the game doesn’t put you in the mood to race. It’s modern licensed indie rock with some recognizable some songs. The vehicle sounds are acceptable at best. Couple this with the bad voice acting and the audio detail is a dud. The game seems geared for a younger audience stemming from the music selection and the focus on social media. 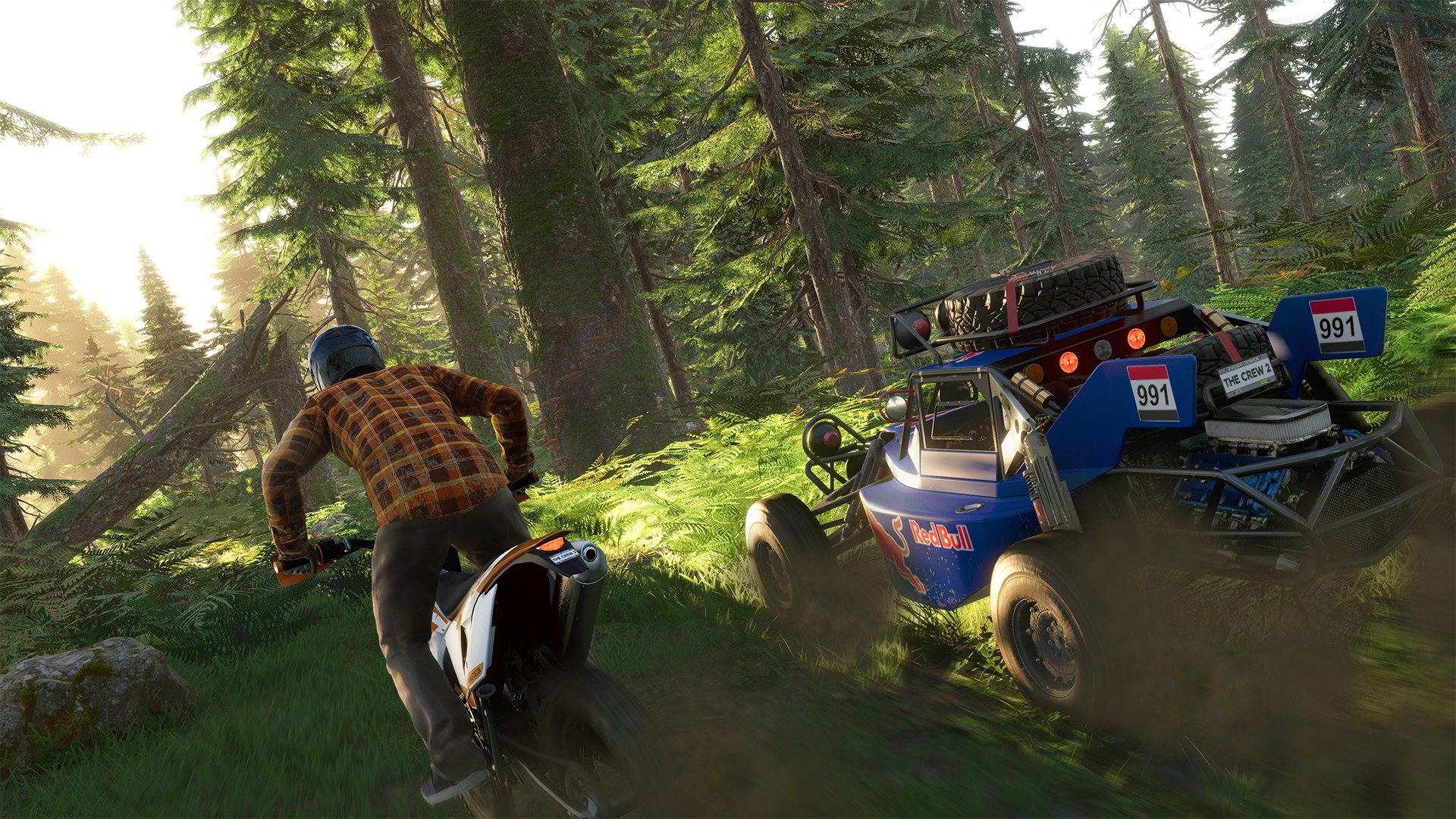 The Crew 2 comes off as appealing when looking at a spec sheet of what it has to offer. From the outside looking in, it seems like a strong improvement to the original. There’s an overabundant amount of things to do and it will keep your time consumed. What it lacks, however, is that hook to want to play it. The driving and physics are bland and the narrative is dreadful. Thankfully, the vehicle selection will be appreciated by any car nut and the visuals have their marvelous moments. The lighting is something to gawk at but the rubberband A.I. will drain your fun. Not being able to easily play online with others is regrettable, but in the end The Crew 2 is a step in the right direction for the franchise.