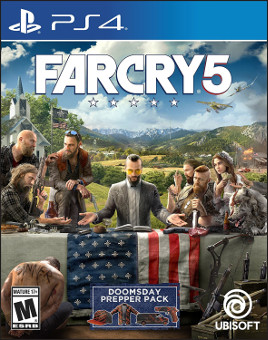 When Far Cry 5 was first announced it threw a curve ball to long time fans by taking place in the not at all exotic location of Montana. This setting worked well for the doomsday cult Eden’s Gate but it was a little disappointing that we weren’t going to explore some far away land. The developers must have shared that sentiment, and decided for the newest DLC to go to the most exotic Far Cry location yet: Mars. You read that right, though if you read the title of the DLC you probably already figured that part out. Lost on Mars is the newest expansion for Season Pass holders or for standalone DLC, and this involves Hope County residents Nick Rye and Hurk ending up on a wacky adventure on Mars.

Things start out with the player leaving behind their law enforcement career and stepping into the shoes of Nick Rye. Out on a drive one night he receives a distress call from local doofus Hurk who has gotten himself in a bit of a jam. Honor bound by bro code, Nick really doesn’t want to stop what he’s doing to reroute to deal with Hurk’s stupidity but the obligation set by the bro code is unbreakable, at least that sounds a little better than admitting Nick really had no choice in the matter since the tractor beam dictated where he was headed anyway. And the final destination of the tractor happens to be on Mars, where Nick learns how dire things really rare.

During his holiday on Mars, the Hurkster ended up getting involved with an AI entity known as Anne and somehow had all his body parts dismembered and scattered about the red planet. Hurk naturally wants Nick to help find and un-dismember all his various parts, but he also needs to give Anne some assistance with restoring power to various towers and energy cores on Mars to return her functionality to optimal levels. This also ties into stopping the plot of the Space Crabs to invade Earth, because on Mars there is a millions of years old race of giant crustaceans that have some beef against Earth. None of this would have been brought to our attention had it not been for Hurk’s interplanetary trip, but due to him currently not having a body Nick is the only hope Earth has. 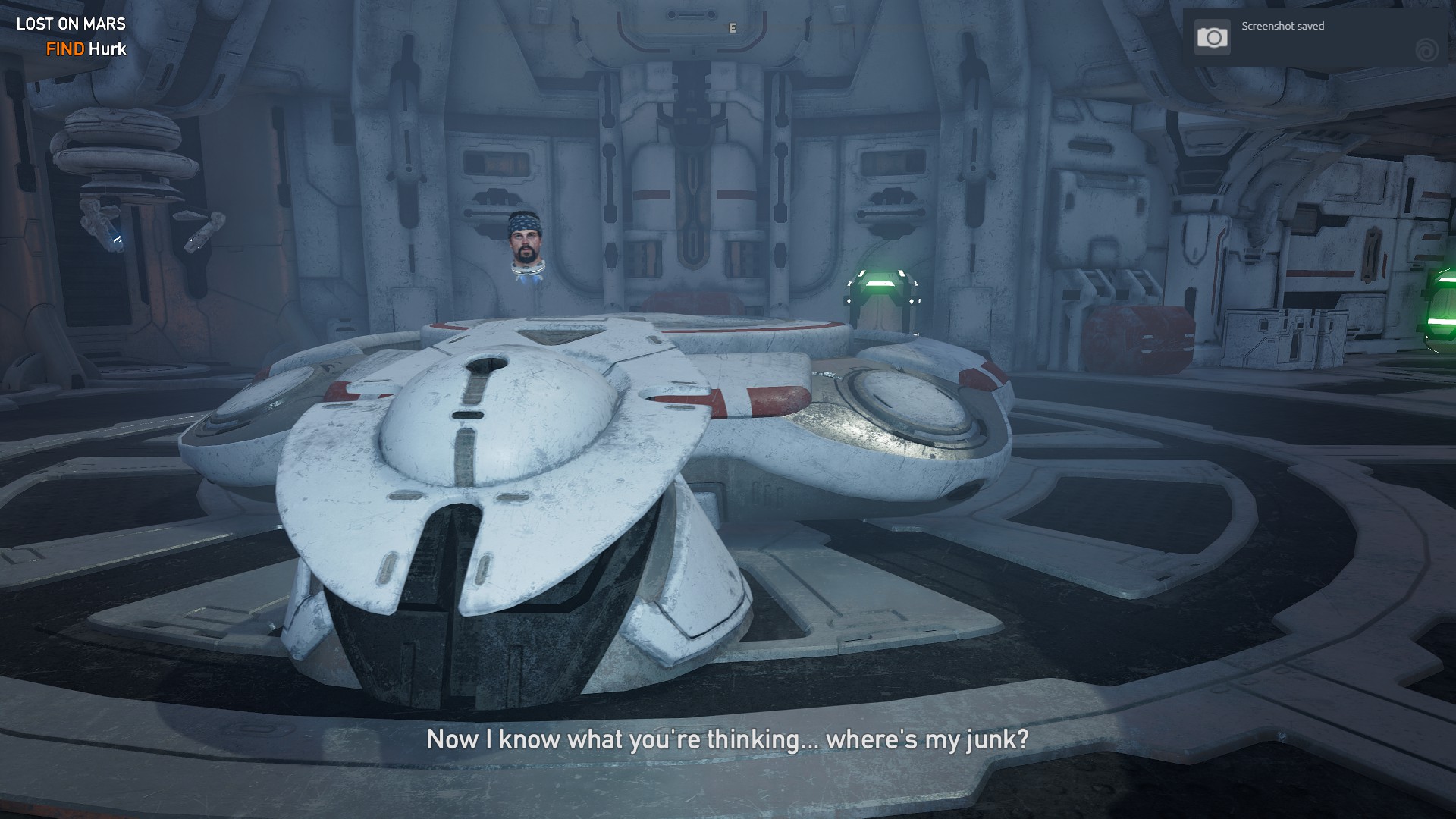 Based on the plot synopsis, and the fact Hurk is a main character, Far Cry 5: Lost on Mars is not something that takes itself seriously, nor should it be taken seriously by anyone who plays it. The core game of Far Cry 5 dealt with some serious subject matter with the whole plot of a deranged cult taking over a rural community, Lost on Mars is simply meant to be popcorn fun. The banter between Nick and Hurk is pretty amusing early on, Hurk naturally getting most of the good lines and lamenting about needing to find his dismembered member and the sorrow of coming across his peckerless pelvis. Buddy comedy grade dialog is an area where this DLC succeeds.

Things on Mars work slightly differently than they do back home in Hope County. The weaker Martian gravity grants Nick the ability to have Super Mario tier jumping skills, and once he gets the gravity belt activated he can get an extra boost to reach those out of the way plays or hover in pace momentarily. There are no arms dealers on Mars but as Nick recovers more energy cores he has access to more guns from the 3D printer. These weapons are all energy based since there are no bullets on Mars and need a cool down period after firing but they do mimic standard gun types like pistols or shotgun and have clever names like the Laser Blazer or Disaster Blaster. Hemoleum serves the function of Martian currency, which can be obtained from poorly disposed barrels or from the corpses of space crabs. This is used to unlock new guns from the 3D printer or other items such as space bandages. 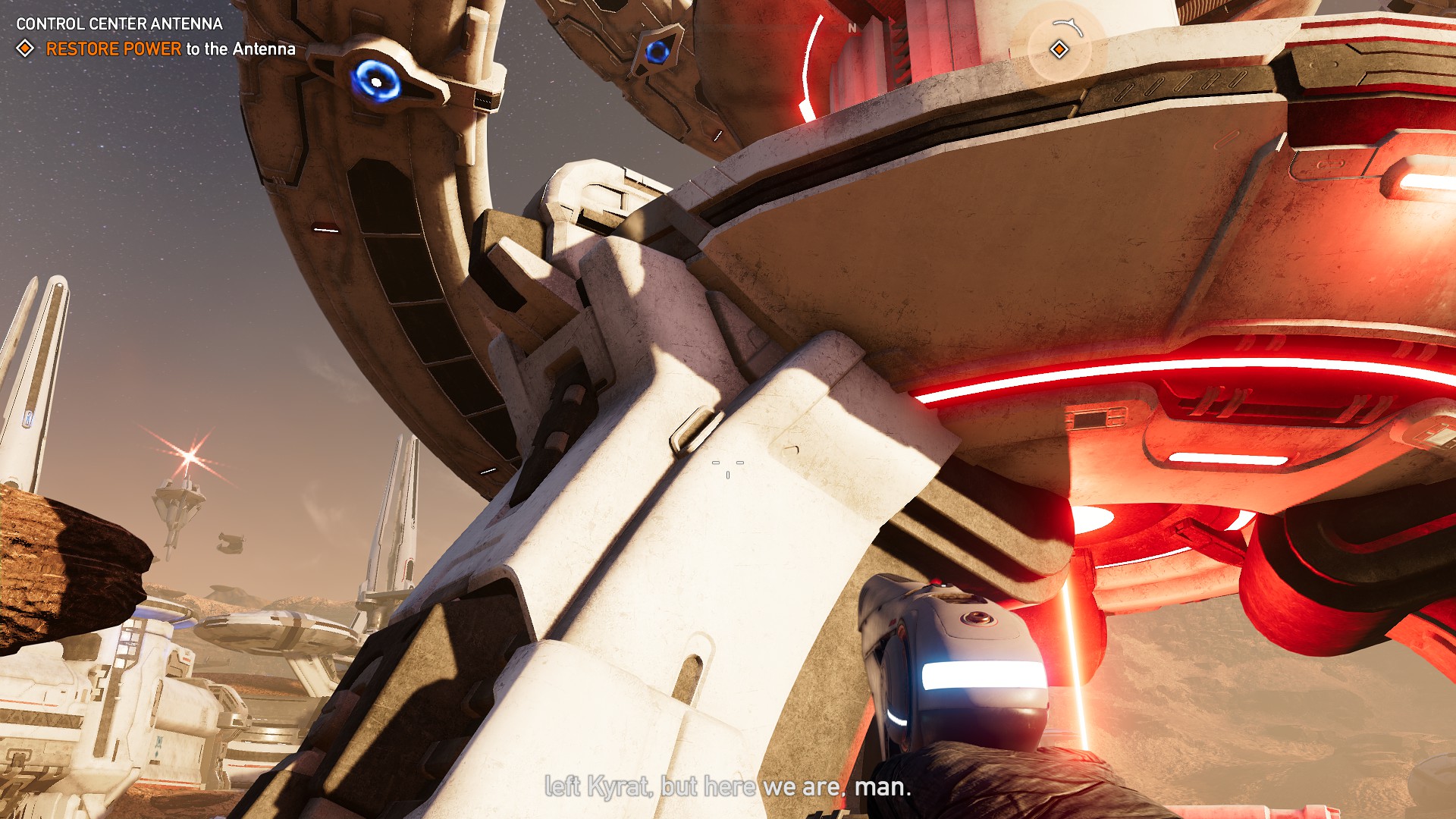 Lost on Mars has something in common with Kyrat, which is it is filled with towers that need to be reactivated by climbing to the top of them. This is referenced in a joke at the beginning of Far Cry 5, assuring the player that this wouldn’t be a regular thing. A similar self referencing comment is made here, but there is a fair amount of tower climbing on Mars. These towers are a bit more enjoyable to climb than the radio towers in Far Cry 4 since these structures look like they were built by an architect for the standard 8-bit castle in a 2D platformer and playing with decreased gravity is nice but this feels like an artificial way to pad the experience.

The landscape of Mars is about what anyone would expect, the red and brown terrain isn’t known for having a variety of local flora and fauna, it’s pretty much barren rocks, mountains, sand and abandoned space stations. Giant space crabs are found wondering certain areas and walking on the sand is a good way to make them come to the surface. Queens serve as minibosses, and the bulk of the enemies encountered on Mars are space crabs in varying stages of development or family rank. Battles consist of shooting the crabs until they die while avoiding getting swarmed, eaten by them or hit by their projectiles. Certain items can be lifesavers in combat, such as being able to make the crabs attack each other or granting oneself temporary invisibility to sneak past the space crabs. While the player is trying to put Hurkty Durkty back together again his consciousness ends up inside of the battle Brobot, or has he called himself Brobo Cop. 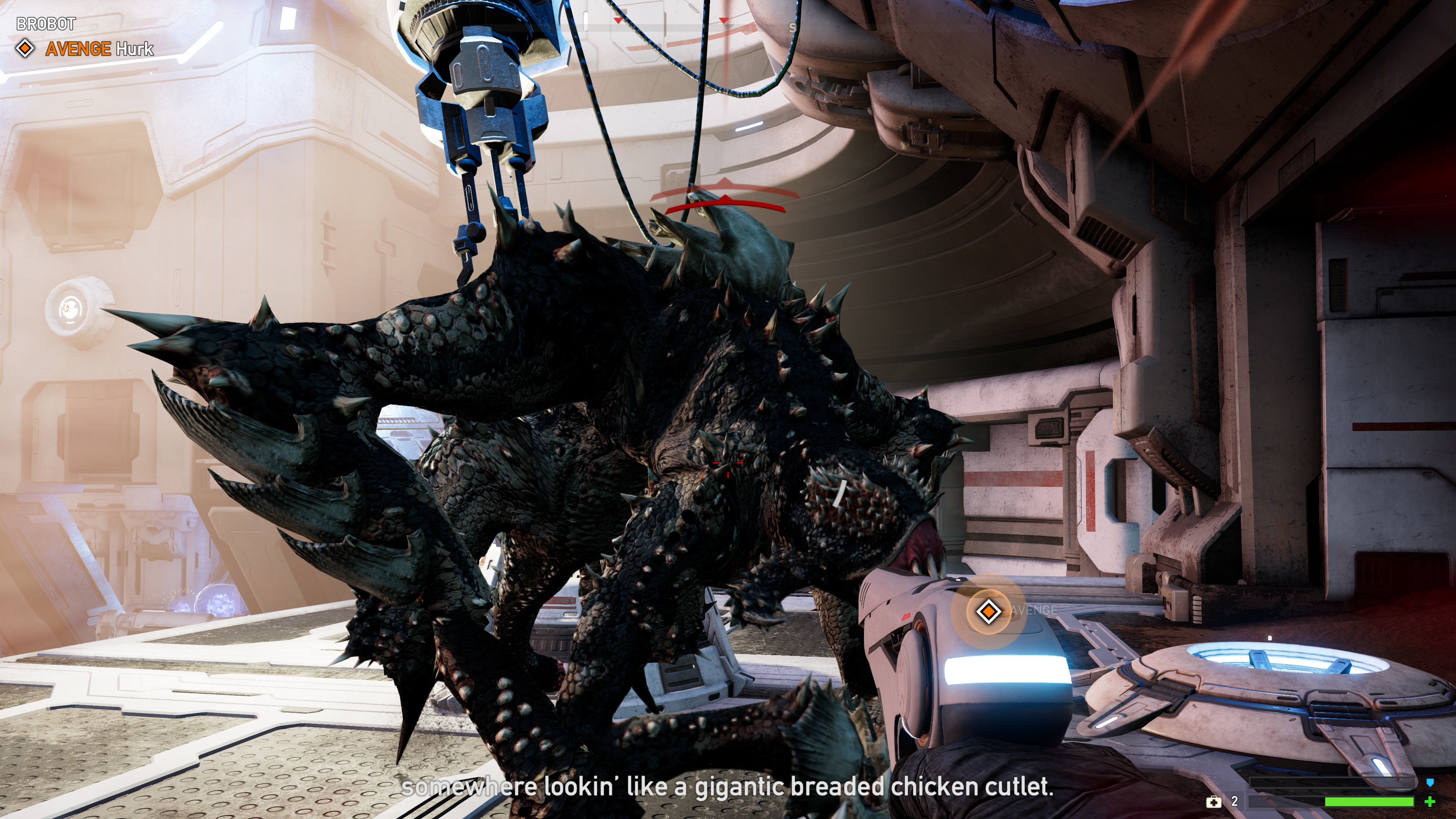 The overall gameplay isn’t bad but it does suffer from lack of variety. Like Far Cry 4, climbing up towers will help clear up the map and open up way points. Anne needs Nick to find energy cores, and to get those Nick needs to find the space crab queens and kill them to retrieve the core and restore power to an area. With fifteen queens to kill, this can be a daunting task since after about queen number three my thoughts went from this is a lot of fun to how many more of these are there? The excitement of fighting swarms of space crabs doesn’t last for very long, and while the banter between Hurk and Nick is amusing it can only do so much to distract the player from the fact they’re going through the same motions over and over again.

Visually Lost on Mars is rather impressive, up to the same quality standards we see in the base game. The space crabs are interesting looking monsters, plus the landscape of Mars and space stations look fantastic. With this being additional content, it’s understandable that this covers only one particular area but the visuals are subject to the same criticism as the overall gameplay which is that they are nice but lack variety. The sounds of space weapons and space crabs are what one would expect, but there is also some unexpected rock music that shows up at various points in the game courtesy of Hurk. 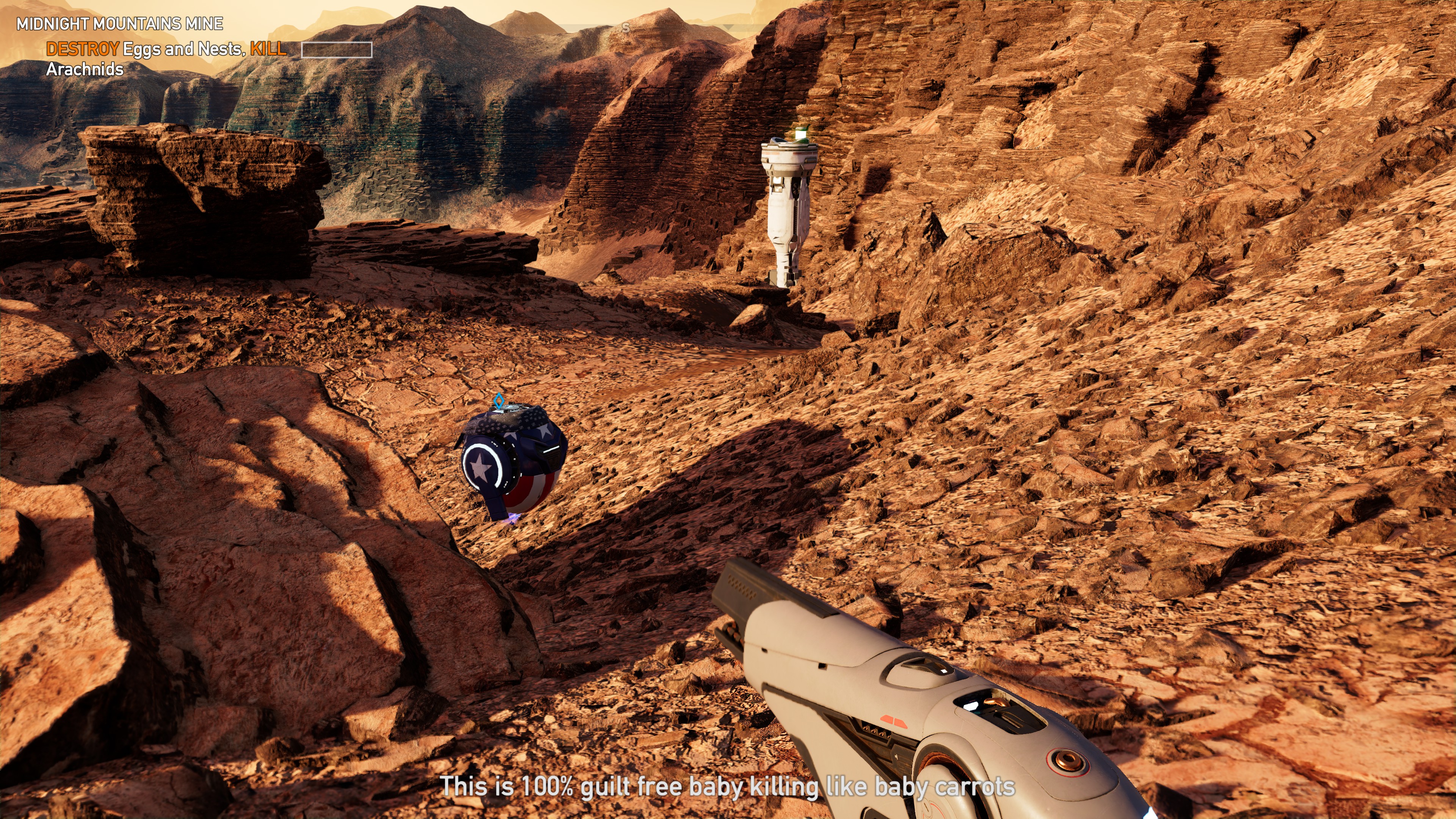 Far Cry 5: Lost on Mars is a nice tongue in cheek addition to the base game. The story is completely ridiculous but it provides context for Nick Rye and Hurk to bro down on an adventure that can only be born from someone as dumb as Hurk. The gameplay aspect doesn’t fare quite as well as looking for each queen, killing her to recover the energy core and repeating for each of the fifteen queens does become monotonous which can also be said for climbing and reactivating the towers. The banter of the two earthlings and overall sense of levity do make the trek across Mars more enjoyable though it’s not enough to carry the whole expansion. Overall, Lost on Mars does have several moments of amusement, and while it might not achieve a true level of greatness it is entertaining enough to warrant a visit to Mars when someone needs a change of scenery from Montana.