If Bungie has done one thing consistently it’s placing hidden things throughout Destiny [2]’s lifetime for Guardians to discover of their own whimsy. Most recently players chanced upon quite the surprise of a classic weapon from Destiny with a new redesign and punch to pack — Whisper of the Worm a sniper rifle that used to be known as Black Spindle.

The Black Spindle has had quite the journey compared too other weapons and seeing it return to Guardians everywhere as Whisper of the Worm is time for celebration because this was one of the most coveted sniper rifles in Destiny. While the most immediate comparison for the two is the infamous twenty-minute quest which has returned for Destiny 2 but is now on Io and not Earth’s Moon, many might not remember or know of the Black Spindle’s original origins in the humble RNGesus of Crota’s End.

Crota’s End was the first content drop for Destiny bringing a much shorter punchy raid. While the raid wasn’t received well at first, Guardians soon learned to love it for many reasons and one of them was the infamous Black Spindle drop. It was a rare drop chance from Crota himself and much like Gjallarhorn equally sought after before most knew it’s true power. What exactly did Black Spindle do though and what does that mean for Whisper of the Worm?

While exotic items are prized among Guardians there are plenty of Legendary items that equally catch the eye of power hungry players because they might be a little too powerful. Black Spindle was one of those weapons armed with the perk White Nail [Rapidly landing three precision shots will refill the magazine from your reserves.] Making Black Spindle a monster and thus Whisper of the Worm equally the same. It has the exact same perk but is fine-tuned even more than Spindle… being an exotic and all.

So where on Io can this weapon be found? It all starts with a public event on Io at the Last Oasis sector where the public event Taken Blight must pop. It must be this public event. After it starts a mini-boss Urzok, Aspect of Hate will spawn on a cliff near by and must be downed to open a portal in the main public event area. Stepping through the portal will warp to a new quest “The Whisper” the timer begins immediately and fireteams of three have twenty minutes to complete the quest. Oh, it’s also extremely difficult and Guardians will have to be at the top of their game if they want to complete this quest.

The Whisper starts with heavy platforming (it is every type of platforming) which any raiding regulars should be used too, if not pay attention because it’s easy to get lost in The Whisper and die from misshape jumps. After a good ten minutes of platforming a first wave of enemies will be encountered. It is highly recommended to take out all enemies (do not rush any of this.) After several waves of enemies with varying shields for each wave and the final multi-boss battle the sought after exotic sniper Whisper of the Worm will be rewarded to the fireteam. You’ve done it. 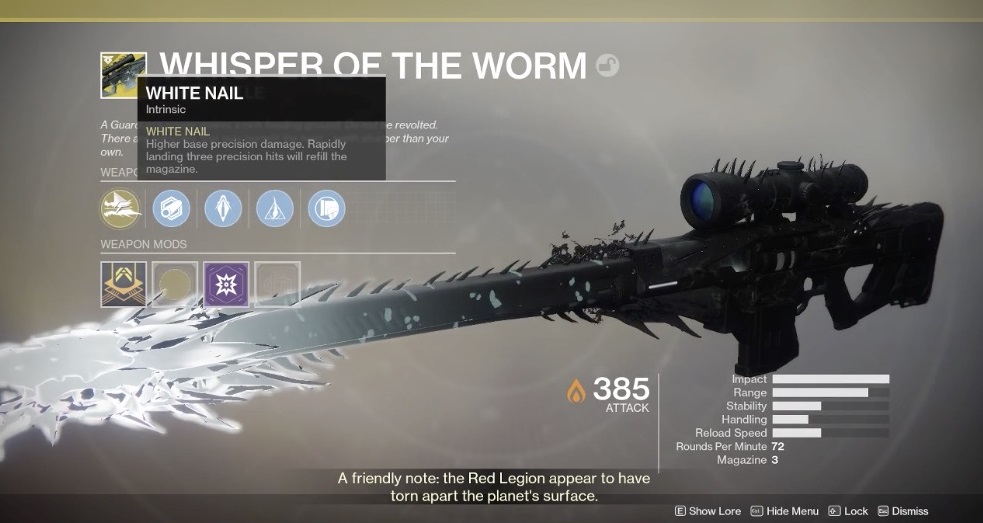 Finding out Destiny 2 had this gem hidden for players to find is exciting. It means looking forward to who knows what secrets with Destiny 2: Forsaken. Many are already comparing Destiny 2: Forsaken to Taken King which brought with it a range of content that introduced all sorts of hidden treasures. Seeing the trend continue can only mean good things for the future of Destiny 2 and who knows what exotic weapons are just waiting to be discovered?