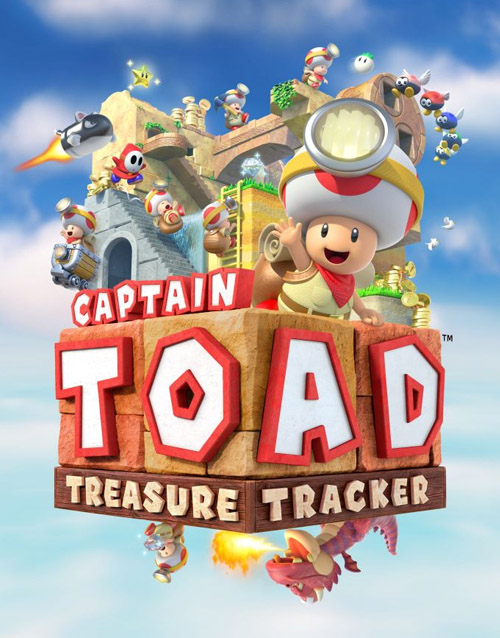 While Captain Toad made his debut in Super Mario Galaxy, he didn’t earn his chance to shine until he was available to play in a mini-game for Super Mario 3D World. Following the positive response from the small adventures, Captain Toad finally got his own title entry in 2014 for the Wii U. Now four years later, players are taken on an adventure once again with the Switch and 3DS port of the same title. Toad is back and more portable than ever, so how well does Treasure Tracker hold up as a unique puzzle adventure that is so unlike the other mainline Mario titles?

The adventure begins with Toad and Toadette climbing up a small hillside to a Power Star where they collect it cheerfully before a giant bird by the name of Wingo comes and whisks the Star – and Toadette – away. This prompts Toad’s journey to rescue Toadette as he travels across the land gathering treasure along the way. A while into the story, Toadette will have a turn to join in the adventuring as the point of view swaps between both characters trying to meet up again. They occasionally cross paths along the way, but are usually just out of reach of one another as they march their way through each new deadly terrain in their path. While both play the same, it’s a sweet take on the narrative and keeps either character from feeling entirely trapped the entire time.

Unlike most Mario characters, Captain Toad is unable to jump due to the heavy backpack he carries at all times filled to the brim with treasure. Due to this, the general gameplay revolves around puzzles rather than the more action-filled exploits of Mario. Each level is usually presented in a box-like area, where the camera can be shifted in almost any angle to get a look at everything. Using only what’s available, Captain Toad must make his way to the end of each level and collect the Power Star in order to move on. Along the way he can collect gems, of which three are in each level, in addition to challenging a level again once the hidden objective has been revealed. Each level presents a variety of challenge, with some requiring avoiding enemies while others rely on moving blocks in order to reach the end. 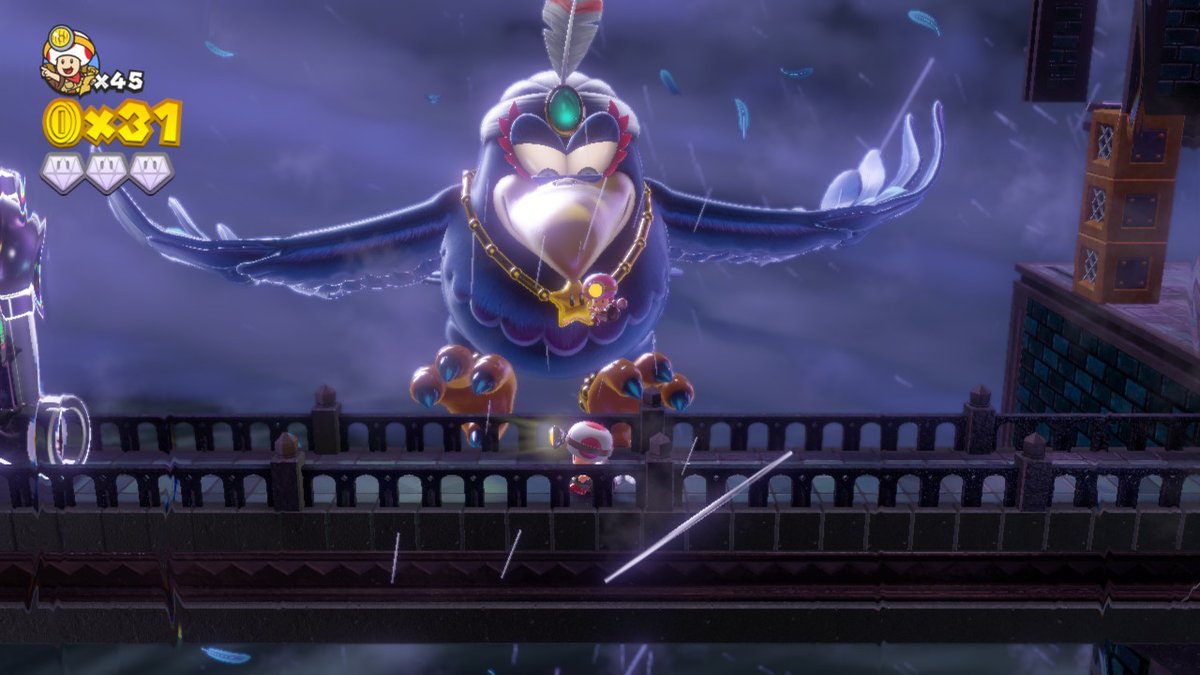 Some of the more unique stages come in the form of cart rides, which have Toad or Toadette in an on-rails shooter scenario as they look around and throw turnips at enemies or blocks in order to get items. These are a nice occasional change of pace that are typically on the easy side, but a nice way to mix things up. Once the story has been completed, the bonus area is unlocked and is where the new levels are made available. There are four total new levels all based on various Super Mario Odyssey Kingdoms, and area an enjoyable bunch to play. Outside of the new levels the bonus area has brand new challenges for the Toads. One mode requires Toad to find all his friends and finish without them getting damage, while the other has Toadette being chased by Mummy Me through the entire level. The only catch to these levels is players must collect gems and secret objectives in order to unlock them all, but this creates a great reason to go back and replay levels.

One of the big changes comes in the way of docked mode while playing on Switch. The Wii U, 3DS and Switch in handheld mode all make use of touch screens for certain puzzles. While playing along in docked mode, however, there’s been a change to allow players to still tap mandatory blocks in order to proceed. Using the gyroscope in a player’s controller of choice has a reticle moving around the screen which can be used to tap on enemies or other objects in the way. This makes it easier to play handheld mode, but at the same time can be a bit in the way. The reticle never disappears, and is instead on screen the entire time while playing handheld. While players will certain get used to it there is something a bit distracting about not being able to make it go away. Some of the motion controls needed to turn certain wheels can also feel a little slow, especially when in a hurry. It definitely feels apparent that it’s a port of a Wii U title in that regard, but still manages to play wonderfully. 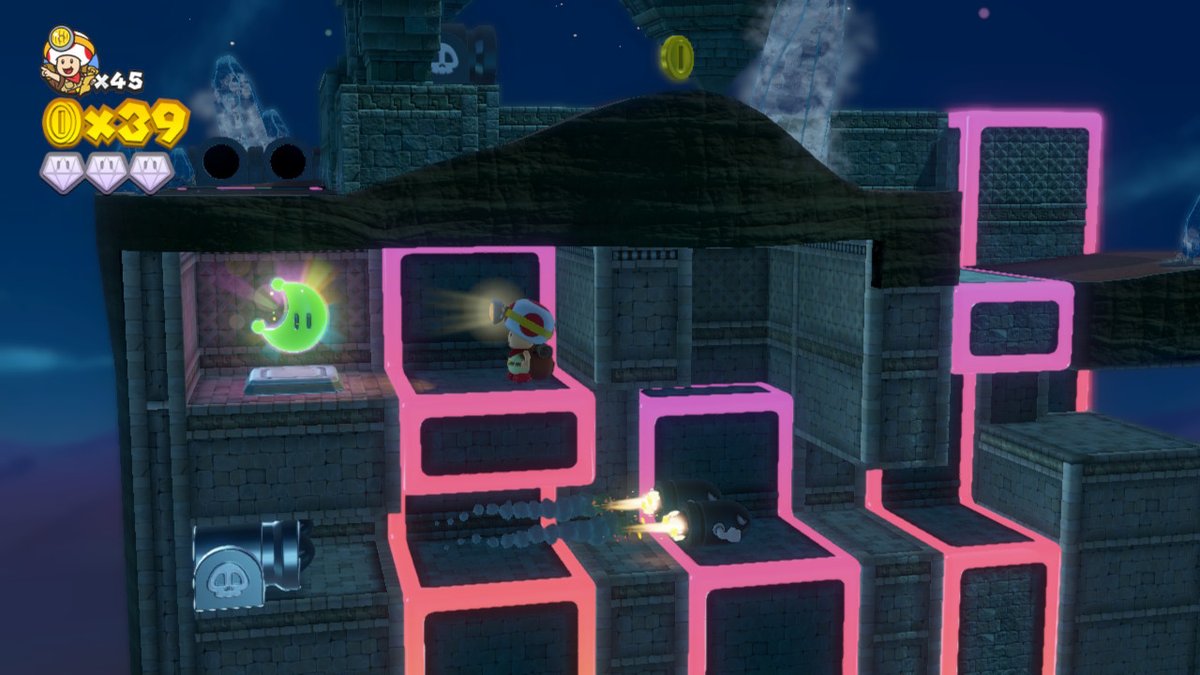 The Pixel Toad hunt is no longer an amiibo exclusive challenge, and is instead available upon completing any level. Players will still dive into each level to find their pixel Toad, which can either be tapped on the touch screen or with the gyro controls. This time around, the Toad amiibo will unlock the Super Mario Odyssey stages early for those who don’t want to wait until finishing the campaign. Brand new to the Switch version is the inclusion of a multiplayer mode. Players will each take one Joy-Con with one controller Toad, and the other a pointer on screen that can shoot turnips at enemies. This is a great mode for those who want to play with friends, and although it can make things pretty easy it’s fun to solve puzzles together or even help complete some of the more difficult levels.

The visuals are still just as lovely as any Mario title, with the new Switch version set at 1080p in docked and 720p in handheld. It runs flawlessly smooth, as nothing ever clutters the screen to make things slow down at all. The usually cheery music fits every area, with some wonderful callback soundtracks to various Mario stages with some included themes from Odyssey making their first appearance in the new levels. No two levels ever feel exactly the same, either, as each has its own look and take on different styles of puzzles and makes each one really feel like a brand new adventure for either Toad to explore. 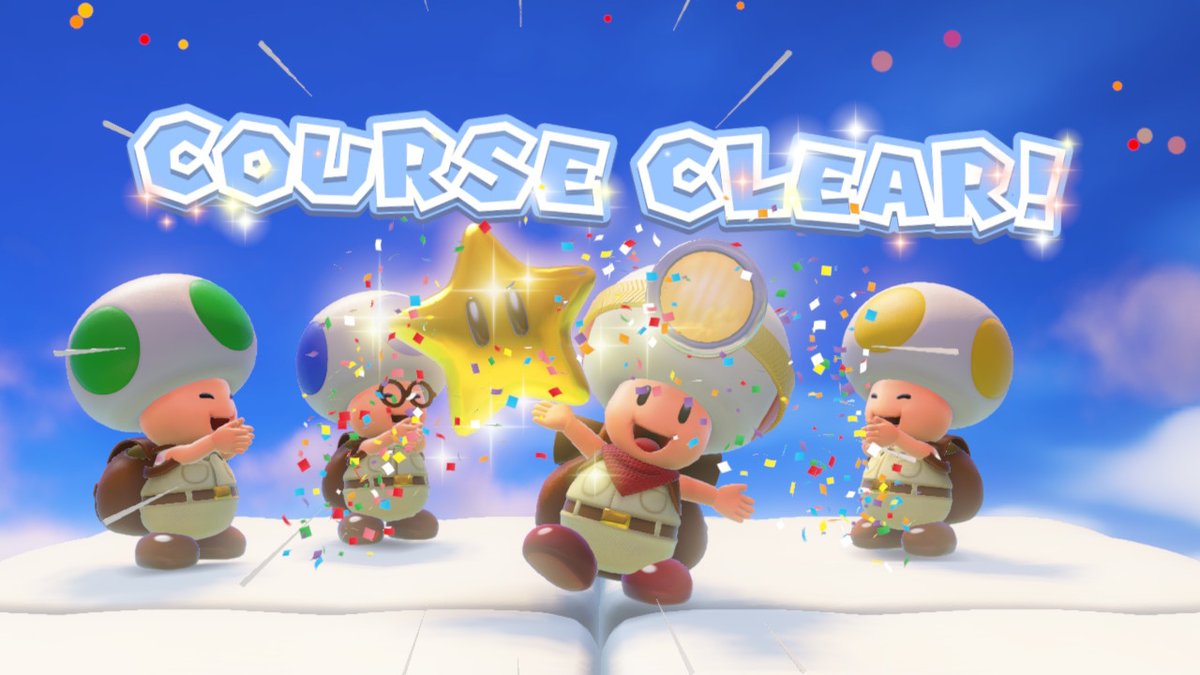 Just like his grand adventure, Captain Toad: Treasure Tracker is simply a delight to experience in the unique and puzzling world he explores. Those who had the original on Wii U might not get as much enjoyment the second time around due to the small amount of new content, but this is a must-have puzzle title for anyone who hasn’t picked it up before or is just desperate to have it on the go. While it may just be a port with only a few new additions, hopefully there is more to come from the adventurous Toad in the future on the journey to collect all the treasure around.