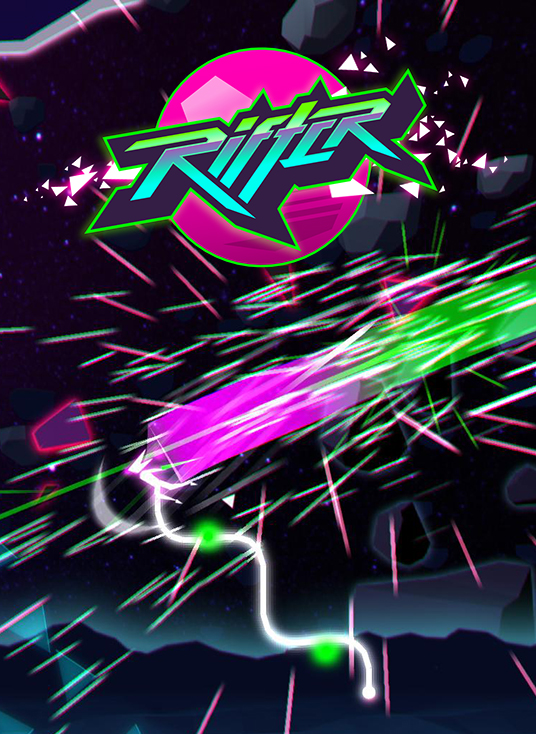 Momentum isn’t a force that just happens but rather needs to be built.  Speed and acceleration work together to create a movement that just keeps flowing, with each new action adding to the motion until you feel like an unstoppable force of untamed velocity.  It’s an illusion, of course, because one careless hit is all it takes to turn blazing speed into a decidedly non-impressive face-plant, but when the moves chain together one after the other the feeling of overwhelming momentum can feel fantastic.  Rifter is a neon synthwave physics platformer where one move flows to another when working properly, sending the spiky amnesiac protagonist and his helpful companion flying across each stage, swinging and dashing at full tilt to the crack in the world at level’s end.

Why he’s doing it is a bit of a mystery, what with the amnesia and all, but both the rifter and his cheerful companion know it’s a task that needs to be done.  The solar system has planets covered in fissures connected to giant black towers. Hitting all the cracks hard enough will shatter the monoliths, and when they’re all destroyed the entire planet’s outer shell turns into a floating cloud of debris. Every now and then they stop and think about why this seems like a good idea, but seeing as it’s all they know they keep on going even as the questions get less easy to ignore. From the outside it’s an act of vandalism on a solar scale, but despite the seriousness of whatever it is that’s happening the story is told in an upbeat manner that makes the brief moments of dialogue a welcome break rather than interruption.

While the story slowly unfolds over the course of the adventure the bulk of the time is spent breaking these planets open. Each level is a gauntlet of hook-points, cliffs, laser-fields, mines, enemies, and other assorted hazard/opportunities. Only a very few parts of a level are a straight-up hazard, with most points of interest having multiple uses. Even barreling into an electric field can be helpful if you don’t mind breaking the combo and taking the damage, because the speed of the bounce can do wonders for shaving fractions of a second off your best time if you can get the angle right. That’s more of an advanced move, though, and at the start you’ll be wrestling with the general level layout. 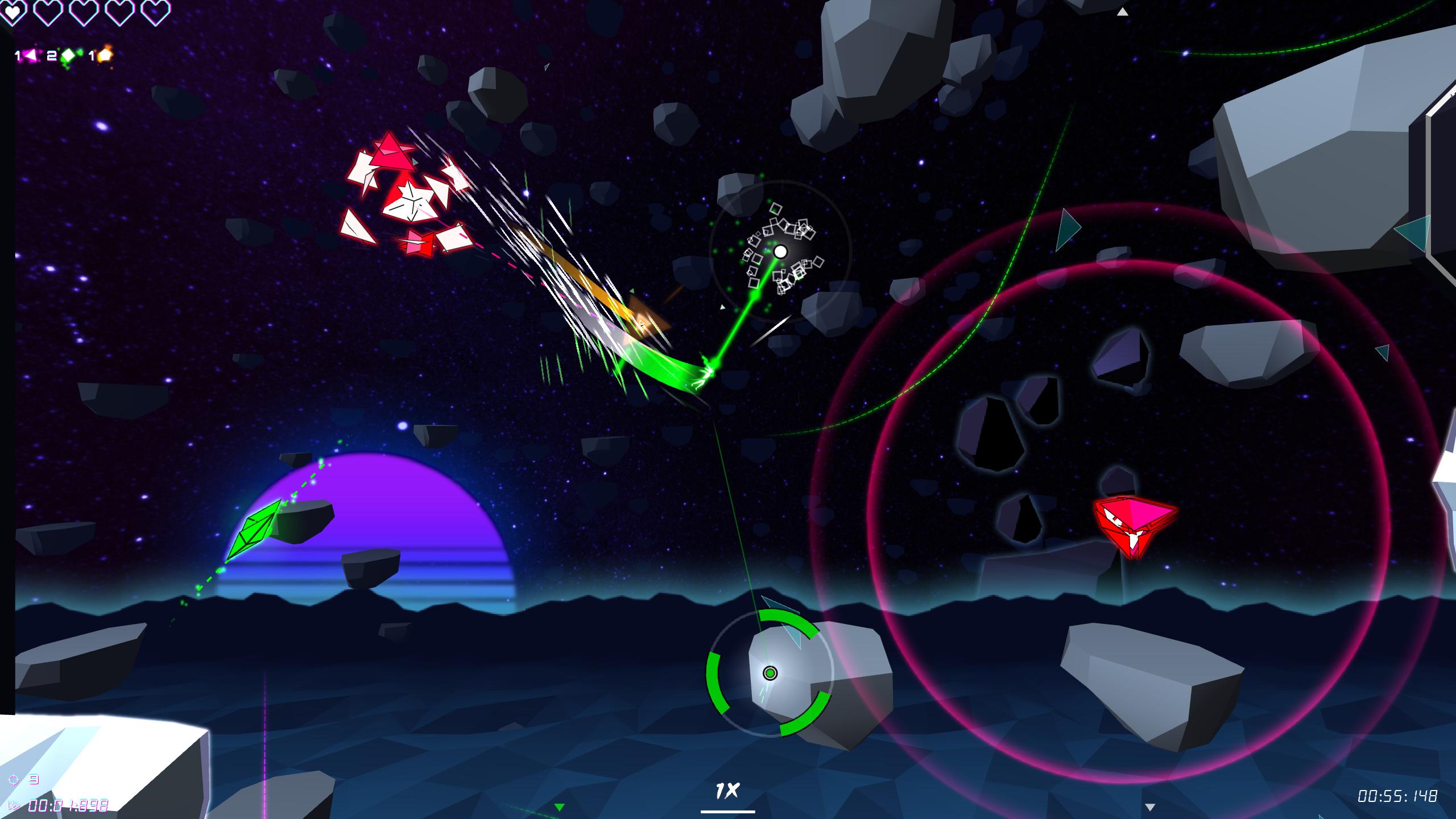 The rifter comes with a set of moves that get upgraded through the adventure. He can run very fast, jump a surprisingly short height, cast an energy whip that latches on to the dots of light and a specific type of platform, and dash in a number of different ways. The basic controls have a couple of configurations and I instantly gravitated towards the twin-stick setup. When you point the right stick in a direction it sends out a green indicator showing the maximum length of the whip, and if there’s something to latch on to it instantly connects and starts you swinging. It’s a system that works, usually very well, but even after hours of play I still run across the occasional targets where it feels either too sticky on a spot I wasn’t aiming for or too precise when I swear I was pointing in the right direction. The vast majority of the time, though, it works incredibly well. Chain a few grapple-points and dashes together and the level blows by at a ridiculous speed.

Dashes are trickier things, and can be pulled off in a number of ways. The first one you’ll see is a green line drawn through a thin gate, pushing the right stick towards it sends out the indicator in the same way as the whip, and making contact with the gate sends you flying on through. Unlike the grapple point, which you can hit from any direction, you need to be aligned at least a bit with the direction of the gate, but when you are you zip through at top speed. Enemies are also eliminated by the dash, with a green dotted line showing the path you can tear through to take them out. For the first few areas that’s basically the whole thing, which is plenty to begin with thanks to the great level design, but then a load of new options open up. The biggest tweak to the dash happens as an upgrade after the first planet is cleared, though, and that’s when the rifter turns from green to purple after a dash and can perform a single other one wherever you’d want, freestyle. Chain that with rooms packed with enemies and grapple points and you’ve got an aerial battle that’s as much about precision movement as it is speed and force. 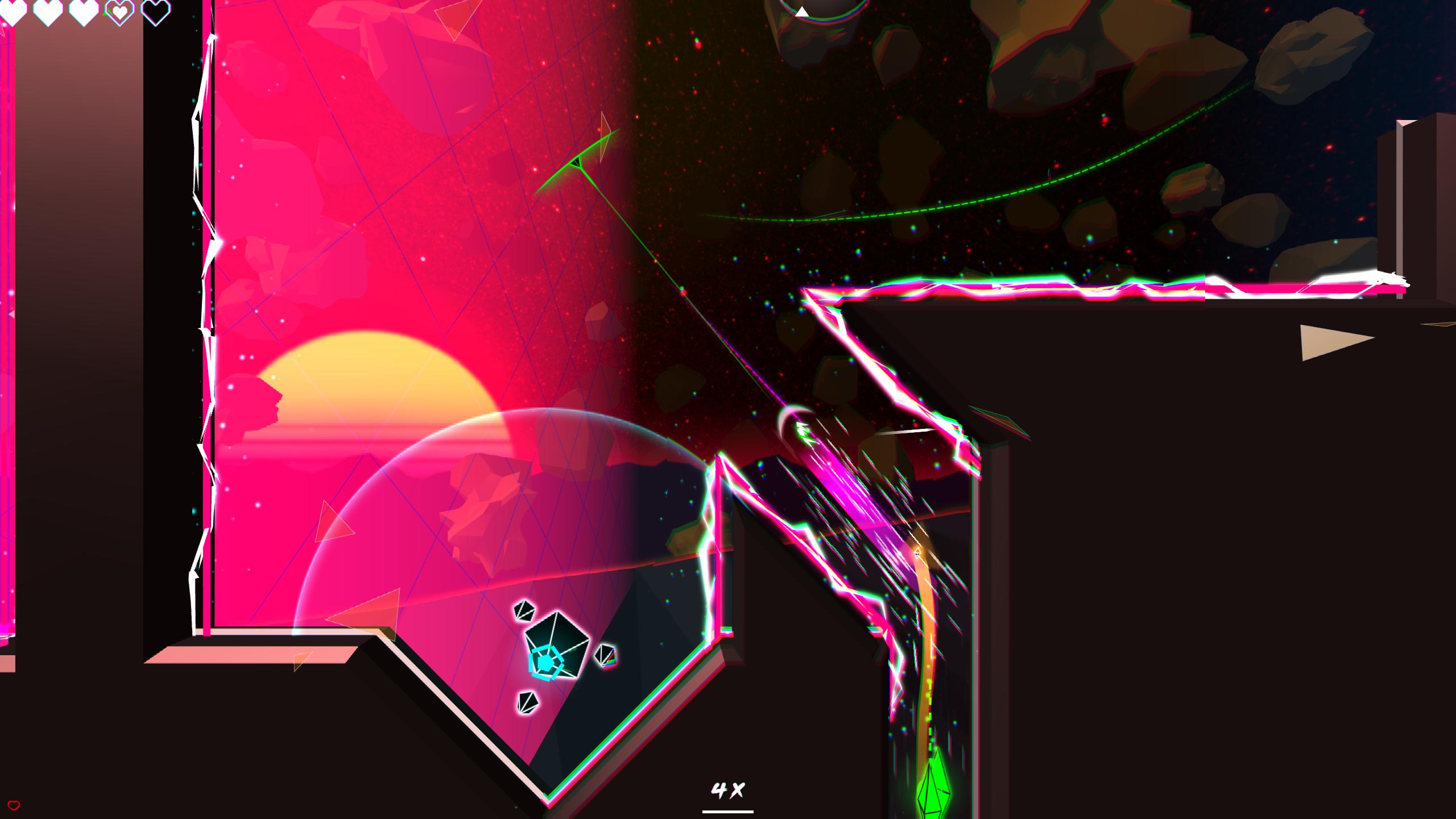 Scattered throughout the levels are little chips of different colors. Even before knowing what they’re for they’re hard to resist chasing after, because if something is tucked away in a spot that requires precise swinging at top speed to access there’s no way to leave it behind if at all possible. The chips are currency for a store that sells ability upgrades, with three separate strings of options for each of the colors. Adding a short burst of speed on latching the grapple or letting go is always handy, as is a one-off shield that builds up at high speed, but I never did quite sort out the backflip. The purchase options are less tech-tree than tech-line, though, so whenever the store let out a *ping* on the world map I went in and bought whatever was available.

In addition to the store there’s also a polygon-headed giant who’s a huge fan of the rifter’s work, and he’s got more chips to distribute if you put in the effort. Once you’ve cleared a level the giant sets challenges to chase after, whether they be surviving without getting a hit, not falling in the water, and of course the time-attack option. Clear a level in 22 seconds? That’s blatantly impossible! (Until practice sees you blow past it at 18:54, of course.) The odds of heavy swearing are pretty high right up until you put a run together, at which point the level becomes a precision dance of carefully-applied momentum. Crash into the level, use that initial bounce for height to nail the first grapple point, let go at the low point of the arc for horizontal movement rather than vertical, get the next grapple point and accelerate faster, tear through a dash-gate, use the free purple dash at the top of the swing from another grapple point to get over a cliff and take a shortcut, and become the dominating overlord of the time-attack leaderboard. After the fiftieth attempt, of course, but the point is it’s a victory! 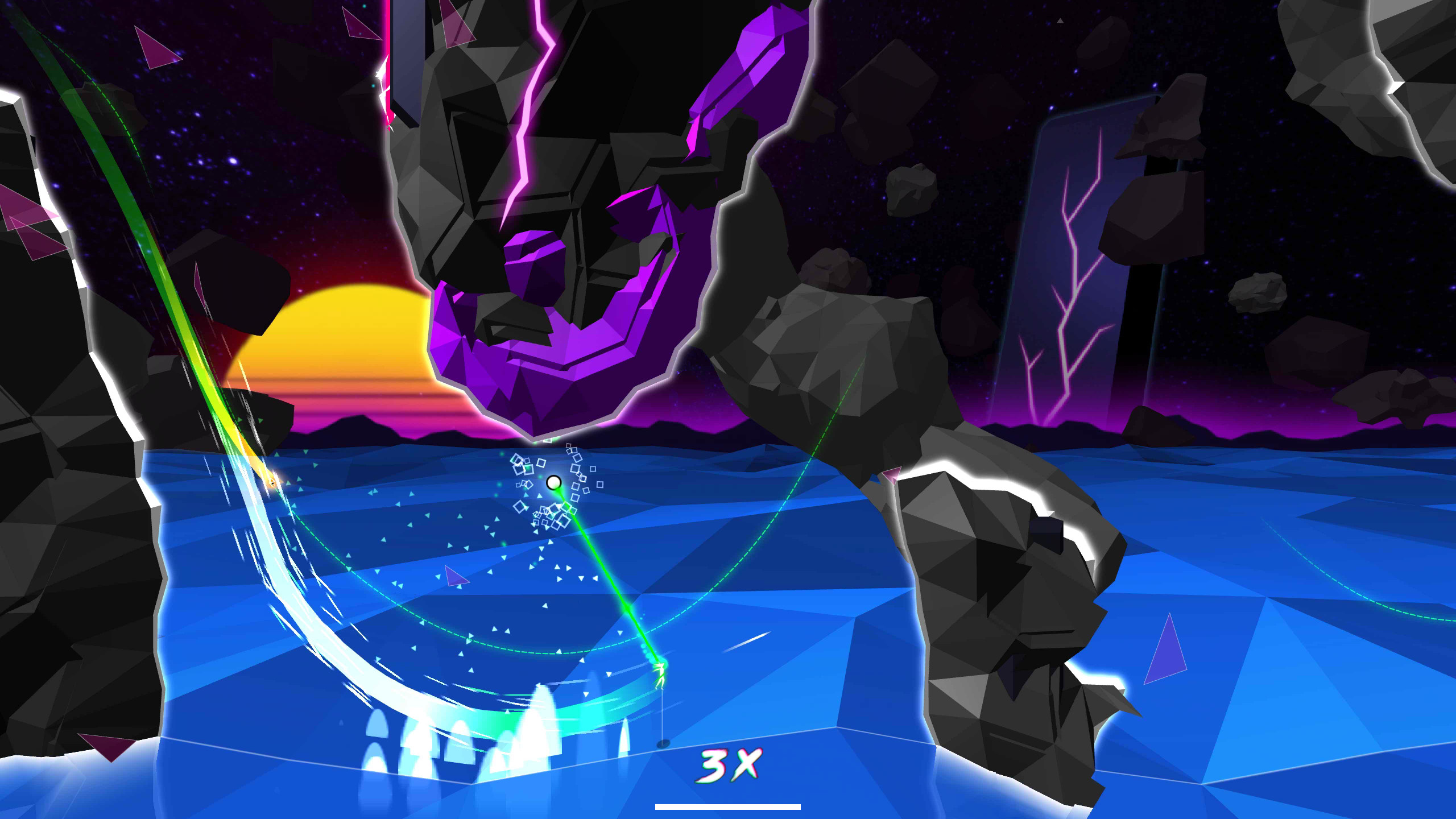 Rifter is a fantastic neon-synth action platformer with a gorgeous, distinctive style and a rewarding challenge. It can be a bit merciless at times, especially when chasing after success on the bonus levels, but the tools to win are available even if they can be a bit tricky to access sometimes. It keeps layering on new mechanics or tweaking the old ones throughout the entire run, and using new abilities to clear the extra goodies from old levels add plenty of replayability. You’ll need to bring your A game to wring the most from Rifter, and the reward is a lightning-fast 2D adventure that sees frustration turn to a satisfying mastery as one goal after another eventually falls to a combination of persistence and growing skill.