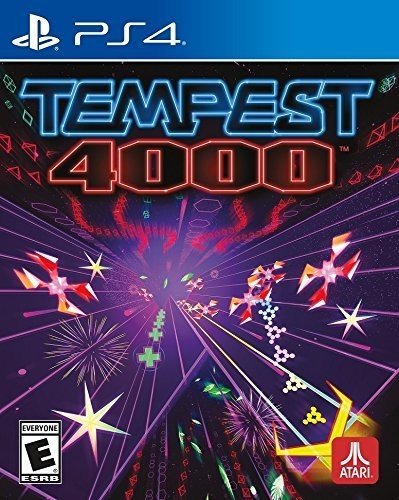 It’s been a long, bumpy, twisty road to Tempest 4000, which is the first official entry in the series in eighteen years. The original Tempest was created by Dave Theurer for the arcade back in 1981, Tempest 2000 was the sequel for Atari Jaguar (later ported to Saturn) from Jeff Minter in 1994, Tempest 3000 hit the Nuon in 2000, and then a very long time passed. Seeing as nobody else was doing anything with the series Jeff Minter made a thematic sequel called TxK for the Sony Vita back in 2014, and after legal wrangling with Atari, the game has been revamped as an official part of the Tempest series. It may have taken significantly longer than expected but the result is a stunning trippy light show of pure shooting mayhem.

Even by the standards of the ’80s, Tempest was a bit of a weird one. The player is a yellow claw running across the top of a web that extends into the screen, with various geometric “monsters” starting at the bottom of the web and working their way to the top. The claw has a relatively generous fire rate and everything goes down in a single hit, but there’s a whole lot of them and only the one of you. Thankfully it’s not instant death when an enemy reaches the top, but once you’ve got a pile of flippers working their way across the rim while enemies fire from below it can really trim down on room to maneuver. Even the tightest situation always has a strategy or two for survival, if only you can see it through the chaos and be fast and precise enough to pull it off. Or you could just hit the once-per-level superzapper and clear all enemies off the board in a single go.

What makes the Llamasoft sequels to Tempest work so well is that they don’t mess with the formula. The abstract geometric enemies are still the same angular baddies they’ve always been, the superzapper is a strict once-per-level escape from imminent doom, and the web still hangs in an undefined space as particles zip toward the screen. The Tempest of 2018 is instantly recognizable as a direct sequel to the Tempest of 1981, even with all the updates to the gameplay and the hyper-colorful effects that combine with the soundtrack to make the game a techno dance-party for eyes and fingers. 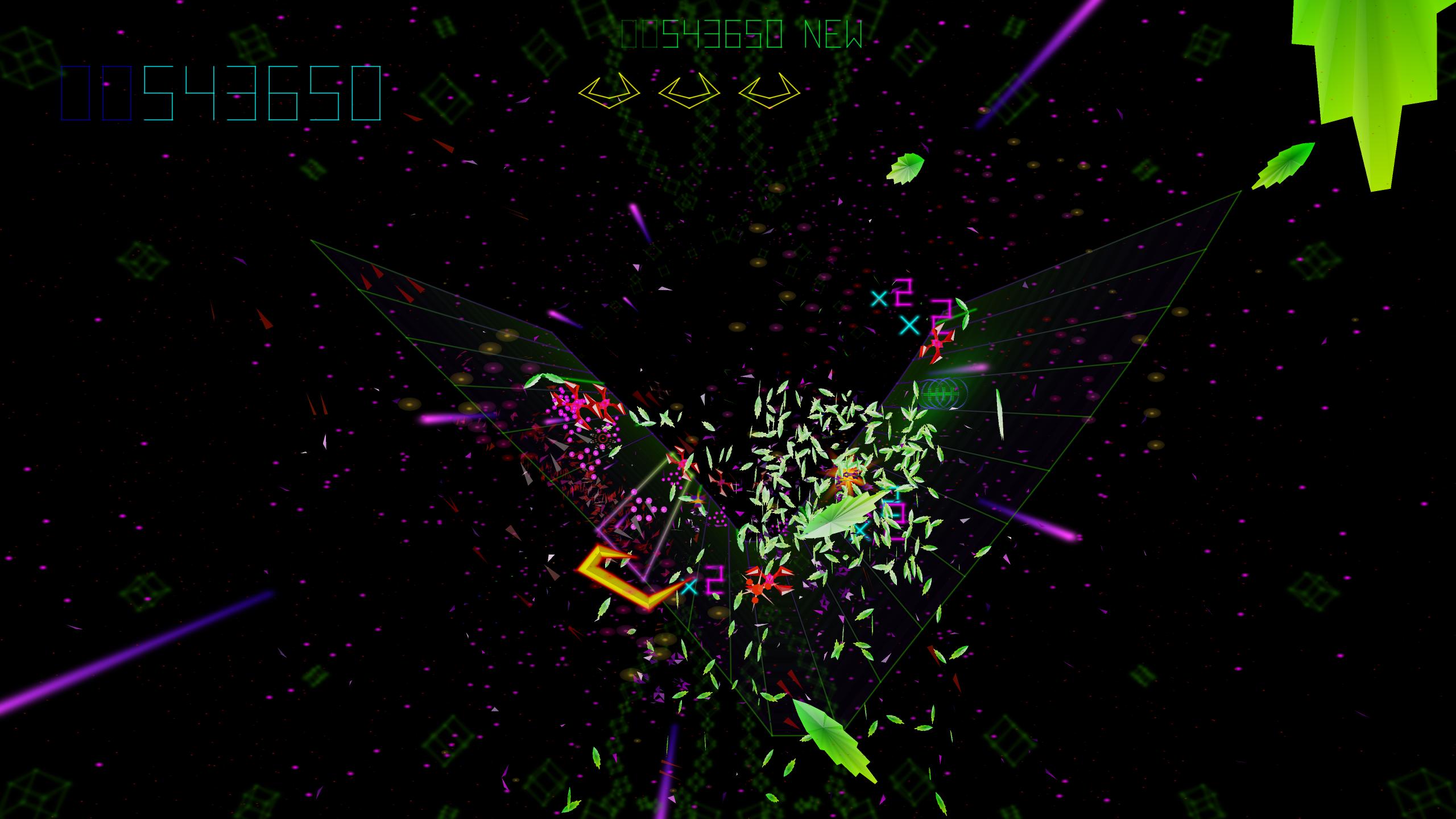 Tempest 4000 at its core is basically Tempest 2000 with a few new tricks up its sleeve. Enemies rise up the web, you shoot them to keep your territory clear, and every once in a while a destroyed critter lets loose a powerup which drifts slowly up the web. Grabbing the power-up earns a number of rewards given out in a specific order, ranging from points to a faster gun, AI helper, and even a jump ability. Each upgrade is a lifesaver in its own way, with a few disclaimers. The jump ability, for example, can get you off the web when bad things are headed your way, but you earn no points for destroying things while in the air. The AI helper is your friend and savior, but it can’t protect you from bullets. Tempest 4000 gives you the tools to survive the web, but nothing in the arsenal will let you dominate it outside of the skill you develop through play.

If you’re not familiar with TxK already (which I’ll admit right here I’m not due to no Vita) it’s initially hard to see what’s new in the latest version of Tempest. New web shapes, new music, and familiar enemies are plenty to start with, though, especially for a series that’s been in hibernation this long. It feels great to sink back into the familiar, and then new enemies start showing up. Disco balls roll gently between the lanes before jetting along at high speed shooting a mass of bullets, spiky electro-fruits explode in a burst of distortion when shot, and the rotors from Tempest 3000 return to spin the web as you try to keep your bearings. While the assault on the eyes never gets to the level of Space Giraffe (that 5 of 5 score from the October 2007 issue of Hardcore Gamer Magazine still stands) the web gets increasingly more active as the effects kick in and the entire level’s shape fluctuates.  And then the ride is over as the web disintegrates in shattering rainbow triangles while you glide down the tubes, watching out for any spikes along the way, and a brief bonus mini-game of flying through gates gives a short rest before the next level starts up.

After a few levels you’re bound to get the first Game Over, and here a standard Llamasoft feature kicks in. You can either start back at level one and try to do better, or take advantage of “resume best” on any level you’ve completed. When you pick a level it comes with a completion bonus and stock of lives, and if you’ve done well in a past game it’s reflected in the amount of each available. Propping up your high score then becomes a matter of heading back to the level when things fell apart and doing better, although you’ll still have to play up to your current progress for it to do much good. The later levels don’t automatically adjust to the newer scoring until you carry it there by playing, which isn’t really a problem seeing as it’s a complete blast to tear through the game. 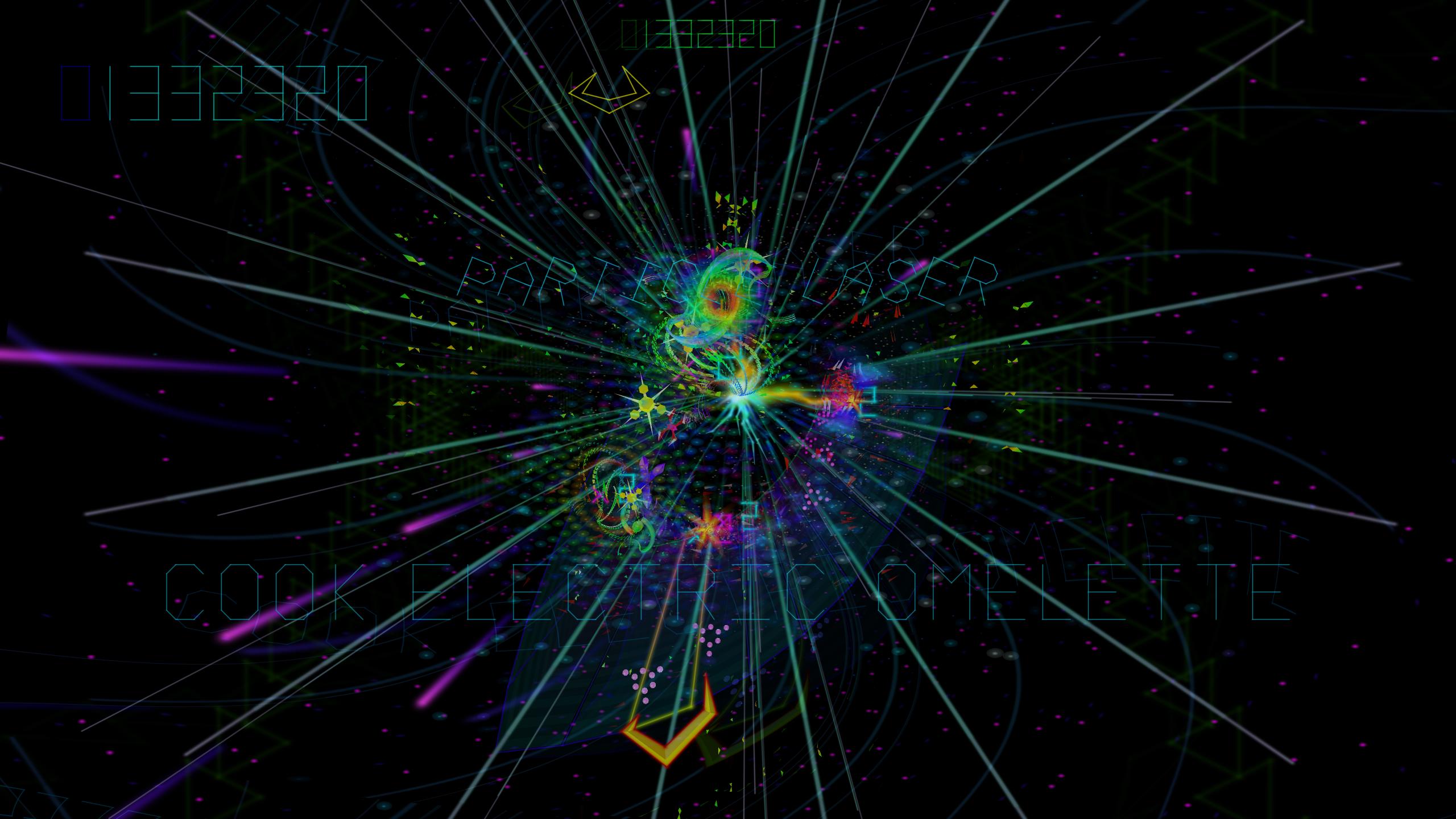 Tempest 4000 is the final Llamasoft Tempest and an incredibly strong game to go out on.  The years of experience with the series are on full display in everything from the flow of the levels, speed of introducing new enemies while mixing in the familiar ones, web design and even the spikes in difficulty followed by a short break before ramping back up again.  It combines difficulty with accessibility, giving plenty of challenge for seasoned players while being forgiving enough for new ones, and even when the intensity ramps up to be a little overwhelming, the music and lights make it worth pushing on.  When the bullets are flying as you manage the crowd working its way up the screen, trimming back the horde over there while timing a power-ups trip up the web over there, zipping over just in time to grab it before heading back to thin out the next set of enemy rushes spawning on different parts of the web, it all feels like you’re conducting a techno-light show made of bullets, vectors and multitasking precision.  Tempest 4000 is a fantastic conclusion to Llamasoft’s work on the games and easily holds its place amidst the classics of Atari’s flagship arcade series.