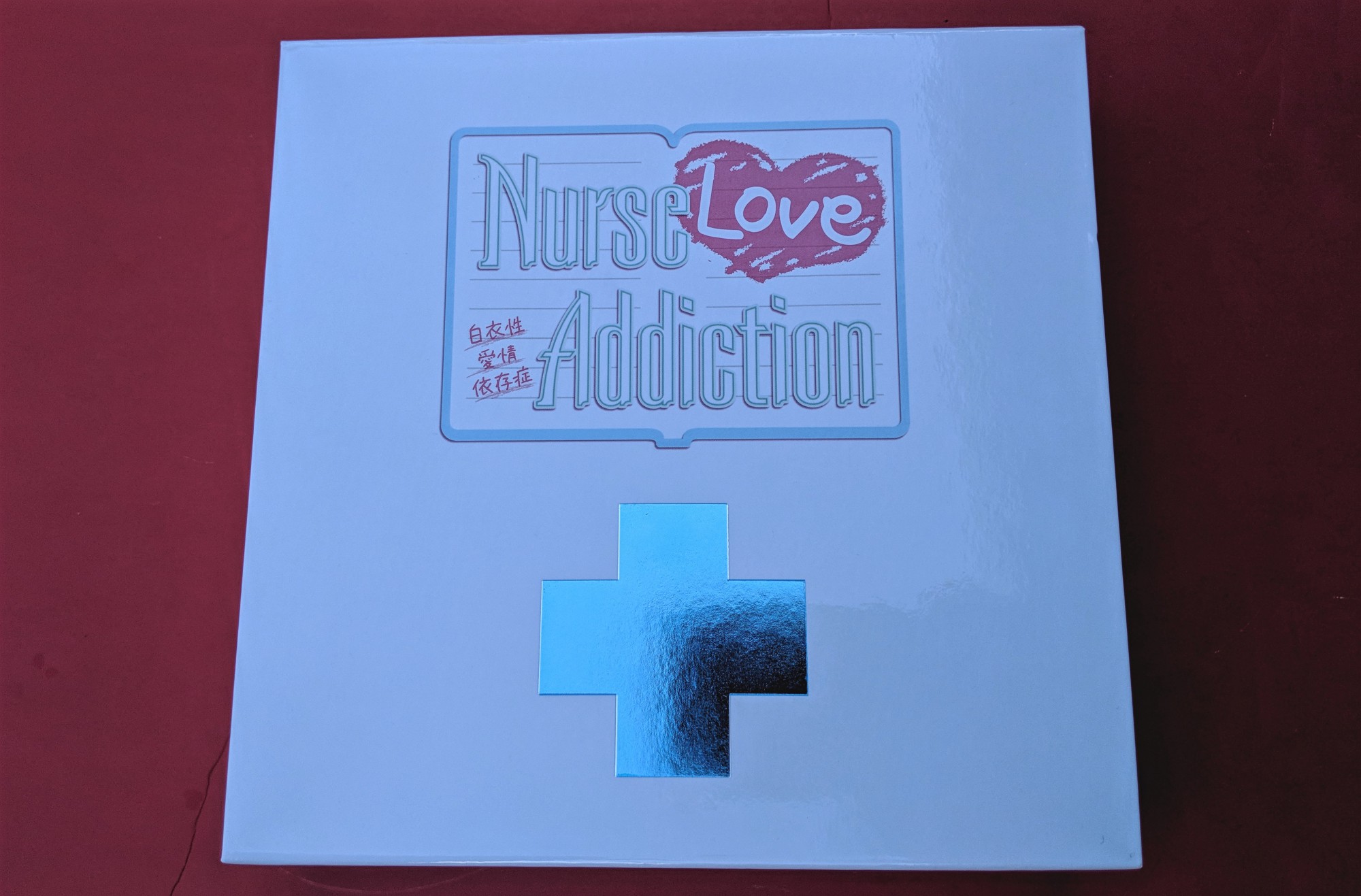 While the rest of the world moves onto Switch, PlayStation 4, Xbox One and PC, a determined subset of fans continues to support the PlayStation Vita. Limited Run Games, known primarily for their devotion to giving these fans exactly what they want, created a special edition for Nurse Love Addiction last year. Not only was this the first visual novel to get a physical edition via this company, it was also the first yuri themed one. As such, a large cross section of fans felt the need to snap up the Nurse Love Addiction Medkit Edition. This special edition offers a pretty packed box, although the contents themselves are not particularly showstopping.

The Nurse Love Addiction Medkit Edition comes housed within a thin white box. This container features no anime artwork of any sort and in fact barely features any visual design at all. Only the front of the box showcases the game’s logo with a shiny, blue foil cross. The box opens up from the bottom via a magnetic clasp to reveal bits of content one at a time. To fit within, the different items are layered between cardboard drawers decorated with blue medical cross patterns. It’s a cute design choice and also keeps most of the contents from sliding around much. Now let’s get to the contents of the box itself which make or break this $74.99 edition. 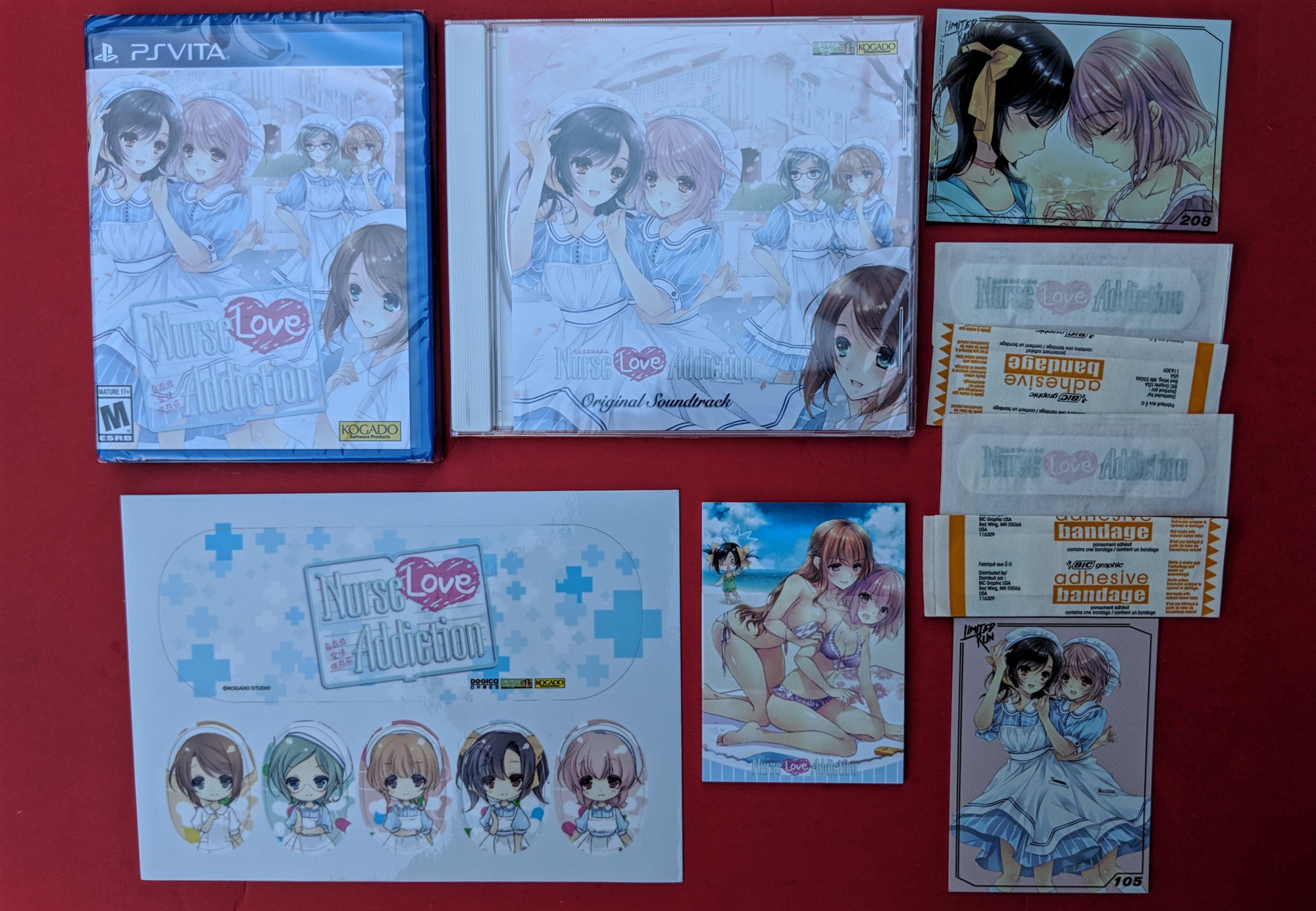 Once the box is opened, the very first item on display is the Nurse Love Addiction Original Soundtrack CD. Many modern games include a soundtrack CD for the first print. Unlike these which tend to come in cardboard sleeves or digipacks, this soundtrack comes in a traditional jewel case with both front and back inserts. It’s also sealed, making this look like a legitimate CD you’d buy at the store back in the day. The original soundtrack includes thirteen songs from the game. On the next shelf is a copy of Nurse Love Addiction for PS Vita. For the curious, this is Limited Run Games release #123 on Vita and it also runs on a PS TV.

Once this shelf is pulled away the rest of the Nurse Love Addiction Medit Edition goodies appear. They’re simply floating around at the bottom of the box. Fortunately, none of them could get damaged by being tossed around. There are six stickers included on a sheet. The main sticker is actually supposed to be a PS Vita console skin – but it could also be used for sticking on a laptop or other device. Stickers feature the different nurses from the game in cute chibi-style artwork. 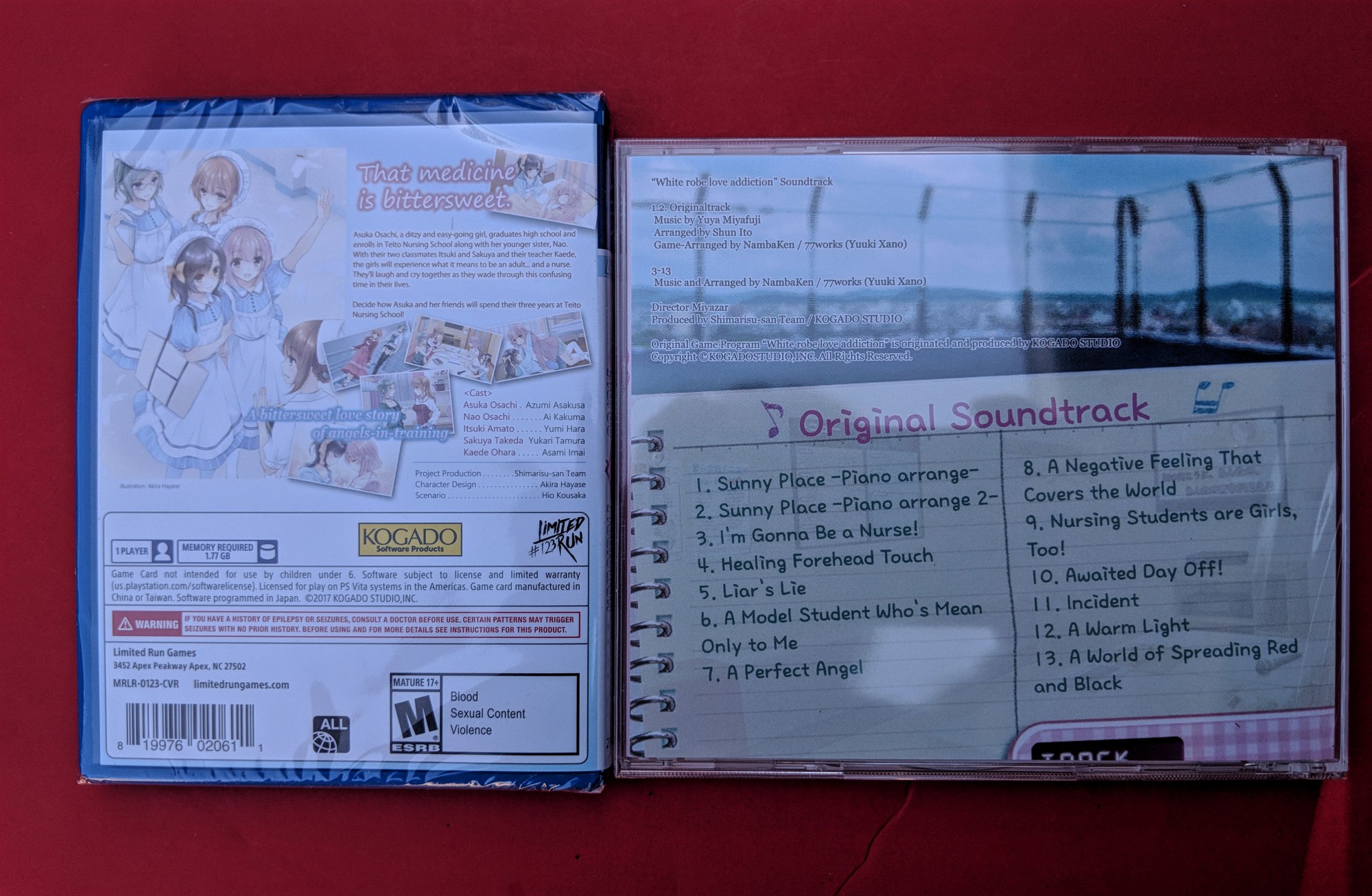 Then there are five trading cards featuring fanservice-heavy CG art from the game itself. Although Limited Run Games advertised these as “high-gloss premium trading cards,” they do not seem to match up to that description very well. Yes, they’re on some relatively thick card stock, but that’s it. The artwork quality is fine, but not glossy. The backs of the cards definitely feature no gloss, either, looking downright drab. These cards simply cannot hold a candle to the much better trading cards which Limited Run Games ships out alongside a game order. Finally, there are a set of five bandaids. Although they look like totally normal bandaids from the packaging, they actually feature the Nurse Love Addiction logo. It’s an extremely silly addition – but it fits the game’s theme!

Only 1,500 copies of the Nurse Love Medkit Edition were produced, and, as is unfortunately the case, a large number of these quickly went up for resale online. Lately the game has been selling for $90-$100 on eBay, which is not terribly high markup compared to the original price. Anyone interested should probably pick it up sooner rather than later as the price on Limited Run Games special editions tends to increase with time.