Racing games typically have two primary objectives: finish the race in first place and don’t crash. One of these requires the player to develop the fine motor skills and reflexes necessary to traverse the racetrack at high speeds. Getting attuned to game mechanics is also essential, learning how to use the braking mechanisms and turbo boosts if applicable, knowing the individual quirks of the selected vehicle, understanding the impact of game weather and learning the layout of the track is also beneficial. The other requires players to have a rudimentary grasp of understanding how to play the game and reminding themselves not to crash, since dying in a fiery crash on the racetrack is not going to do well for the overall score.

Racing games are not my forte. F-Zero and Mario Kart games I enjoy, but anything more complicated than that I’m inept at and struggle with both primary objectives. Because of this, Burnout 3: Takedown wasn’t something that was ever on my radar until a chance wandering into a Game Crazy (remember those?) in which the clerks were playing it on one either the PlayStation 2 or Xbox demo unit. I wish I could be more accurate, but this was 2004 and I can’t even remember what I had to drink last night. Not much attention was given at first as it sounded like a typical racing game, but there were a ton of sounds of crashing vehicles and they were having way too much fun with this to just massively suck at the game so it was time to be nosy, and this is when the glory of Crash Junctions became apparent.

What I was witnessing was not simply driving around and crashing a car, but instead a deliberate kamikaze demolition derby where the goal was to go out causing as much damage as possible. The Crash Junctions varied between each other, but the premise was basically the same: crash in a way that surpasses the benchmarks set at each medal tier in terms of monetary damage. There would be various vehicles and other destructible environmental objects to destroy, oftentimes there was a ramp involved. Depending on what the initial impact target happened to be or the angle of impact could influence the chain reaction of destruction. To make the damage greater, the player could self detonate the car to create an explosion with the Crashbreaker mechanic, damaging all nearby vehicles and turning them into sedan-sized shrapnel. 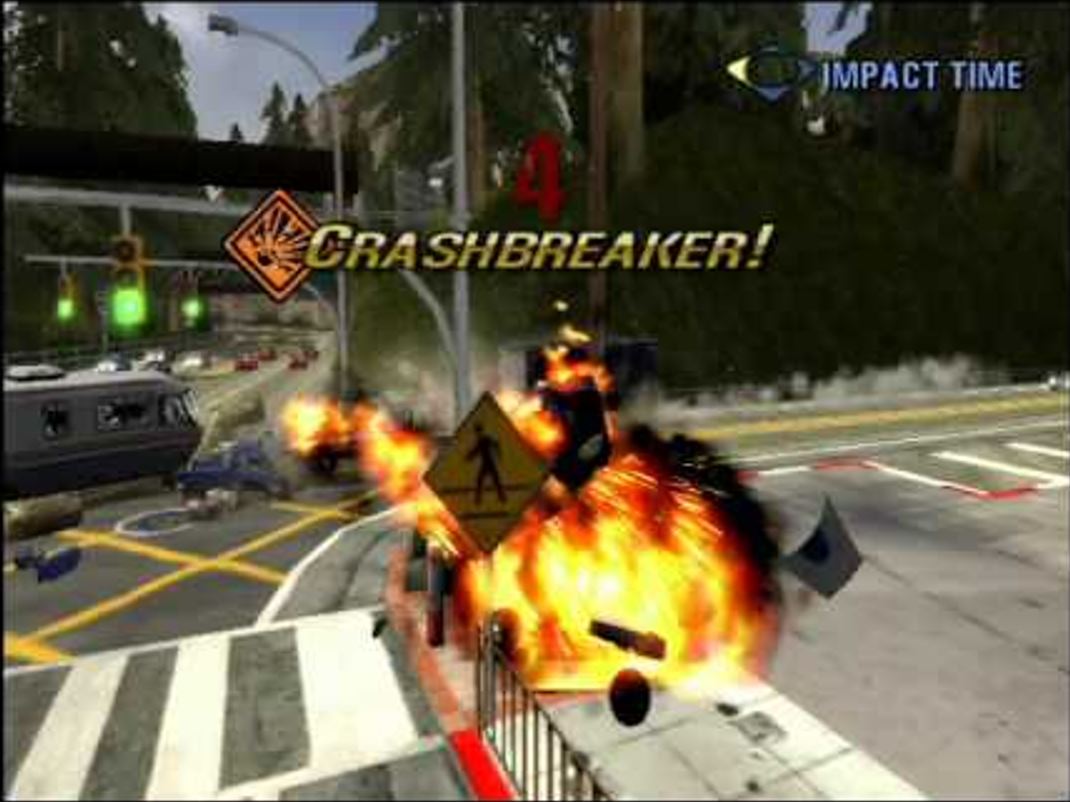 This mode was intriguing as it went against everything I knew about racing games. The goal was to simply crash spectacularly in the most disastrous way possible. The next hour or so was spent at the store with the clerks trying to outdo each other’s crashes and we all became pretty skilled at this by the end of it. At some point we all became physics experts (none of which knew what we were talking about), discussing the exact points on where to accelerate to get the best trajectory to the biggest vehicle to get not only the biggest initial score payout, but also create the best shockwave induced chain reaction of destruction. Needless to say this title ended up going home with me.

As much as I enjoyed Crash Mode, Burnout 3 would be a shallow game if that was the totality of it, and contrary to what my initial exposure to the game entailed, this is a full-fledged racing game and not just a Rube Goldberg crashing simulator. Races in Burnout 3 are aggressive events. There might not be any turtle shells or banana peels to be used as weapons nor does it cross over into Twisted Metal style car combat, but an encouraged tactic to win the race is to force as many opponents to crash as possible by ramming into them until they either sustain enough damage to break or hit an immovable object at an unstoppable speed, knocking the car out of commission in what was known as a Takedown. Skill and finesse still factored into the player’s success as far as vehicle handling was concerned, but it was fun taking a more brute force approach to taking over the lead. 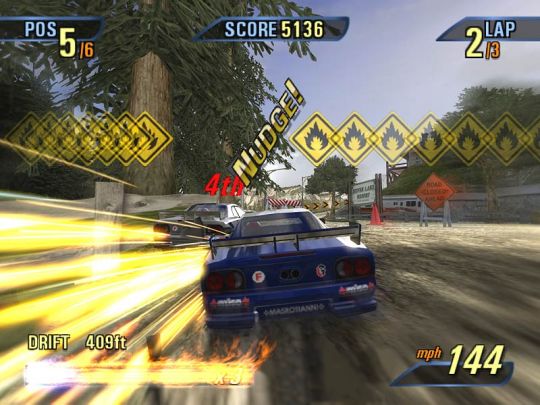 The development team realized that the Takedown mechanic was such a fun aspect they included a Road Rage mode. This was where the player’s objective is to perform a set number of Takedowns within a given time limit. Or before their vehicle is destroyed, whichever comes first. The rival cars would endlessly spawn, ensuring there was never a shortage of targets. Road Rage was great for players who didn’t want to be so concerned with competing in a race but wanted to take out some pent up aggression, making it an extremely-appropriately named mode.

The meat and potatoes of Burnout 3: Takedown was the World Tour mode. This features 173 different events that spanned the continents of North America, Europe and Asia with ten distinct locations. This is the game’s career mode, where earning medals and achieving certain goals would unlock new vehicles and locations, with a total of 67 different vehicles to be collected. World Tour combined a mixture of races, Crash Junctions and Road Rage events, which some variations like Grand Prix events thrown in there. Progressing to a new area didn’t require getting a gold medal in every single event so even though all the different types of gameplay were represented in this mode, players could put most of their focus into the events they enjoyed the most, which personally were the Road Rage and Crash Junction events. 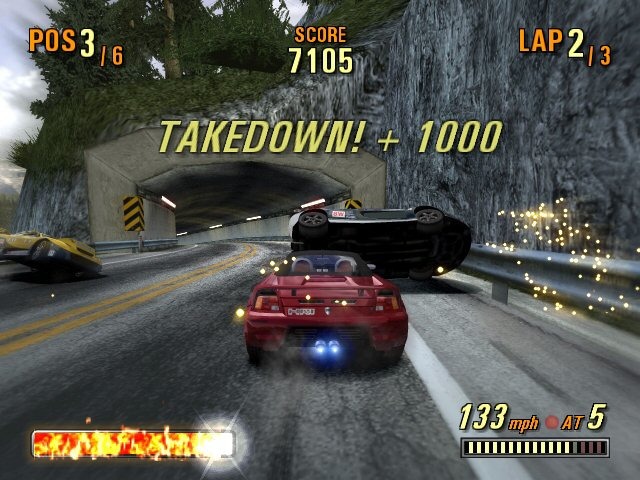 What initially drew me into Burnout 3: Takedown was the basic allure of crashing a car into many other cars to cause as much destruction as possible, so basically testosterone and stupidity. Getting beyond that, Burnout 3: Takedown is actually an incredible game that is loaded with enjoyable content. The more time spent with the game caused a greater appreciation and mastery of the racing modes which led to a lot of fun nights playing this with friends online or on the couch for years after its release. Even though I eventually completed all the events in World Tour, Crash Mode was still the most fun to play with friends, passing the controller back and forth seeing who can rack up the most damage, which I think the last time we did that was around 2008. Burnout Revenge and Burnout Paradise are also great games, but they were lacking some of the charm of Burnout 3. While not an expert on the genre or series, Burnout 3: Takedown is my personal favorite out of the Burnout titles I’ve played and is a true gem among the sixth generation console titles.