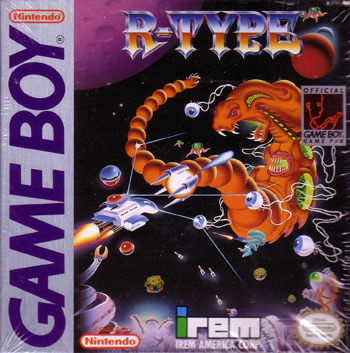 As great as newer video games are, there will always be an audience that appreciates the classics. The past twelve months have been particularly kind to retro gamers with various retro hardware and game compilation titles, particularly 16-bit game compilations that are actually on the cartridges for the system the individual originally appeared. The latest one of these Hardcore Gamer has been following is R-Type, so for this month it seemed appropriate to return to the title that introduced this writer to the franchise, which would be R-Type on the original Game Boy.

The Bydo Empire first made its presence known in 1987 when R-Type made its arcade debut. R-Type was an impressive game for its time with a tension building soundtrack, great boss design and a punishing difficulty. Like most coin-operated games, this was designed to mercilessly spank the player into feeding it countless quarters in hopes of eventually beating it, but the difficulty wasn’t excessively cheap, it simply required quick reflexes and memorizing the proper way to navigate through its eight levels. In 1991 R-Type got a Game Boy demake. The downside is the beautiful arcade graphics have now been reduced to the poorly-lit monochromatic shadow of its former glory one should expect from arcade to Game Boy ports. On the upside it’s portable R-Type, so it seems like a net win.

Bringing R-Type to Game Boy did come with many concessions, as a four year gap wasn’t enough to squeeze the contents of a stand alone arcade cabinet into a Game Boy cartridge. In addition to the obvious loss of color, the graphic quality took a hit. The boss monsters are still impressive for the tiny screen, but not the same. There are less sprites moving around so there are less enemies to worry about. This seems like it would make fighting Bydo easier, but the smaller screen size and reduced quality gives less room to maneuver out of harm’s way, plus the flicker and lack of varied colors make seeing the danger a little more difficult. The net result is still a decrease in overall difficulty, but it will still take a while to master this game. 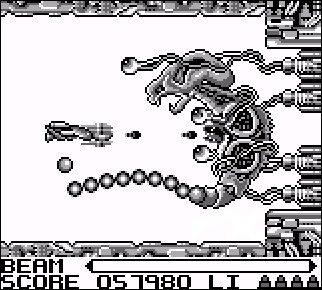 Some more drastic cuts came with the music. The overall sound quality has been simplified from the original version, but worse than that there are only two music themes for the levels. To accommodate the limited memory, the two different pieces of level music alternate between odd and even levels, though thankfully the memorable boss theme remains. The biggest omission, however, comes from the absence of two levels. You may have played this game enough to master it and thought that it’s strange that there are only six levels, especially since seven or eight was the standard for this era. You’d be right for thinking this is strange since originally R-Type has eight levels and two has to be cut in order to fit in your pocket.

Getting away from what was cut and back into what remains we still have ourselves a nice little game here. Having an unabridged R-Type on Game Boy would have been great, but let’s not kid ourselves about what the hardware is capable of doing. Even with the cuts the gameplay remains enjoyable and the core mechanics remain intact. The six levels of space dog fighting are all short, leaving us with a game that can be completed in under twenty minutes once it’s mastered, but it’s going to take many attempts to get to that point. The R-9 can become powerful by collecting assorted weapon upgrades and the souped ship can lull the player into a false sense of security until a wrong has them starting over with nothing, making the area suddenly much harder.

The levels autoscroll from left to right with various enemies and other obstacles with moving patterns. The key to success aside from destroying and evading enemy fire is to learn the proper way to navigate through the level. An example of this is in the third level where the player has to move past a gigantic Bydo ship. This may be kind of cheap, but I remember the way I dealt with this was to fly under the ship and use the flame wave to crawl along the ship, taking out gun turrets. Not the most glorious approach by any means but it got the job done.

Even shrunk down and decolorized, the boss fights are memorable. The boss at the end of the first level is iconic with the series, which I always thought looked like an overgrown test tube xenomorph fetus. Visually the first boss is the most memorable, but the nest for the segmented space worm at the end of the second level is a fun battle. Some of the later bosses are hard to figure out what exactly you’re supposed to be fighting. The end of the fourth level has several things that could be described as shield and spaceship hybrids coming at the player in all directions that are easy once the pattern is learned. The fifth level boss looks like it could be a car from The Jetsons with an organic vacuum cleaner mouth. The Game Boy screen was not kind to the visuals for some of the later bosses, but that didn’t make defeating them any less enjoyable. 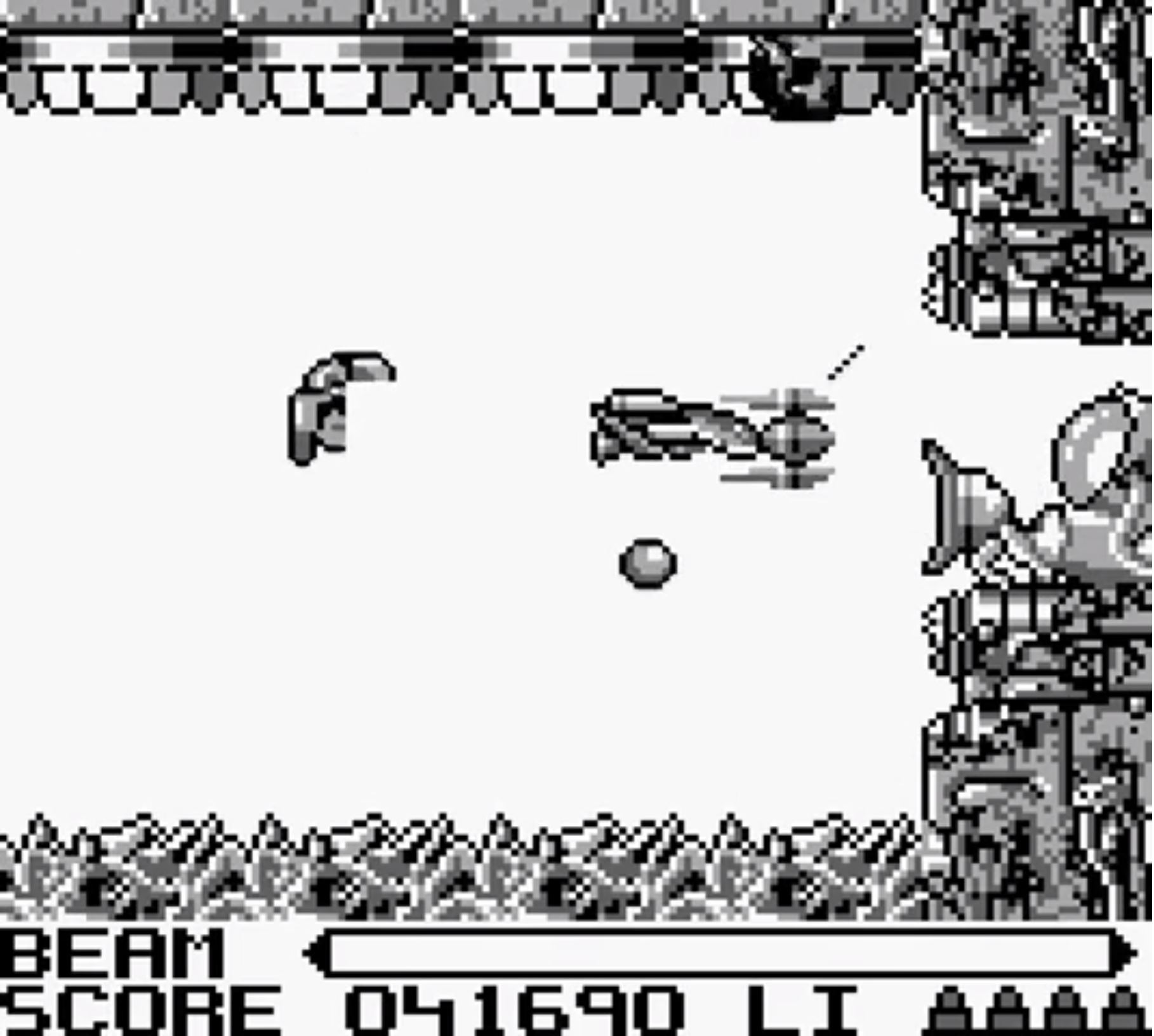 R-Type had to make a lot of concessions to make the transition to being pocket sized, but was able to do so without sacrificing the enjoyable gameplay. Comparing it to the original arcade version or other full color ports will make this one come up short. It is, however, an impressive port considering the hardware limitations that had to be worked around and the challenging action remained. Based simply on its own merits, R-Type is still fun and a must play for anyone who still gets use from their original Game Boy.